This documentary represents the best (and most expensive) home movie humanity has produced so far! “Our trip to the moon and back” edited to celebrate and evoke the experience of the only 12 humans (so far) who’ve set foot on another celestial body. The culmination of so much work by so many, it’s the real-deal 2001: A Space Odyssey. Gorgeous and uplifting.

For All Mankind begins and ends with excerpts of the historic 1961 speech by President John F. Kennedy that announced the earnest start of the Space Race, following the launch of USSR’s Sputnik satellite in 1957. “We choose to go to the moon …because it is hard… using alloys not yet invented… an untried mission… the greatest adventure upon which man has ever embarked.” And it still is, 50 years on, so it’s fitting to have this 1989 documentary re-released on Criterion Collection Blu-ray to commemorate it. 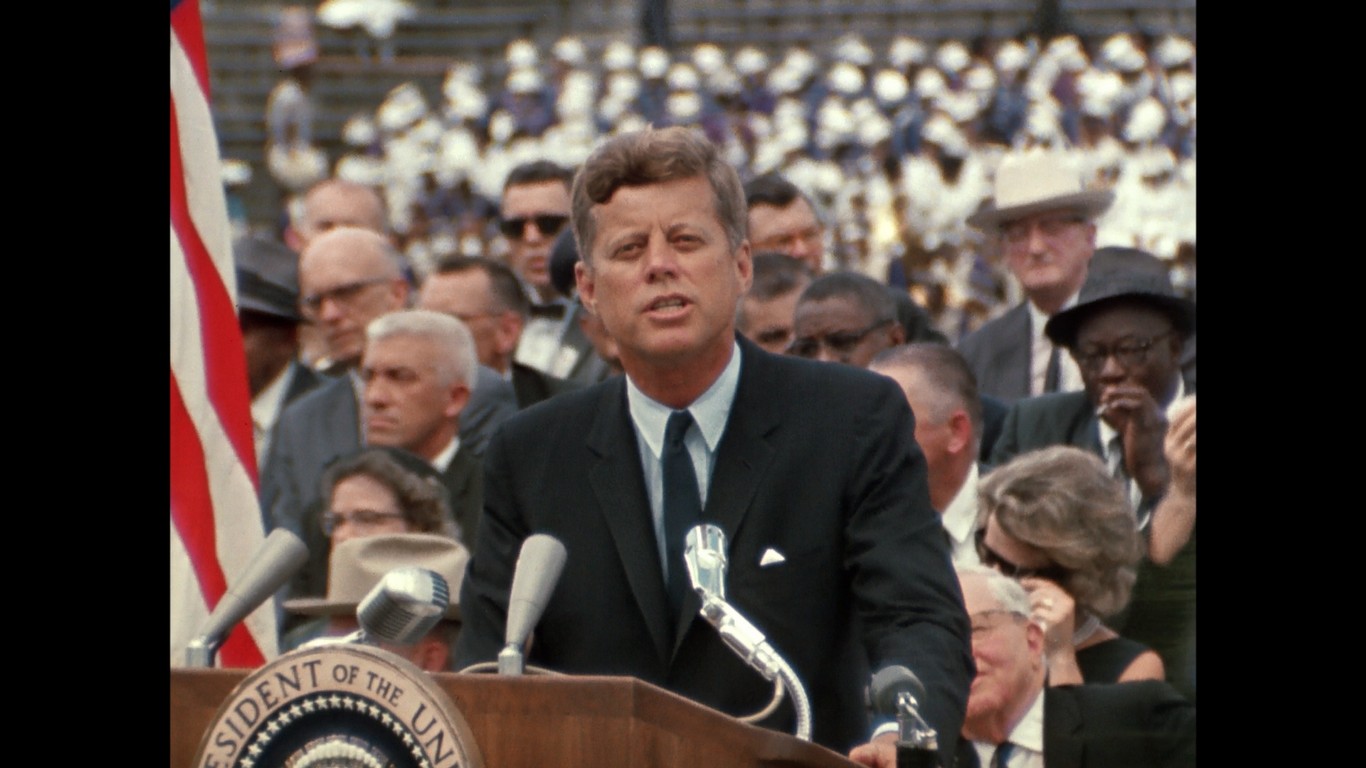 Director Al Reinert was a journalist who covered the Apollo missions and whenever he interviewed the astronauts, he recognised how moved they’d all been by the sheer beauty of the experience. He was dissatisfied with how television clips available to the public reflected this human story, hankering to see a more comprehensive version of the missions on the big screen. In the lull between the Apollo and shuttle missions, he frequented the Johnson Space Center archive and befriended NASA librarians Mike Gentry and Don Pickard; the latter had been assigned the Apollo missions from the outset and kept a list of the best space footage for use in reports to Congress and TV networks. He also met Morris Williams, who was responsible for the safekeeping of the original film, kept in a cold vault at the centre. He enlisted their help and with editor Susan Korda pored over 6 million feet of original 16mm footage, plus interviews with astronauts, to compile a visual and audio composite of the space program that charts America’s mission to the moon.

This task involved allowing three days to defrost the film, accessing it via an optical reader, transferring from 16mm to 35mm and then editing it for the big screen. 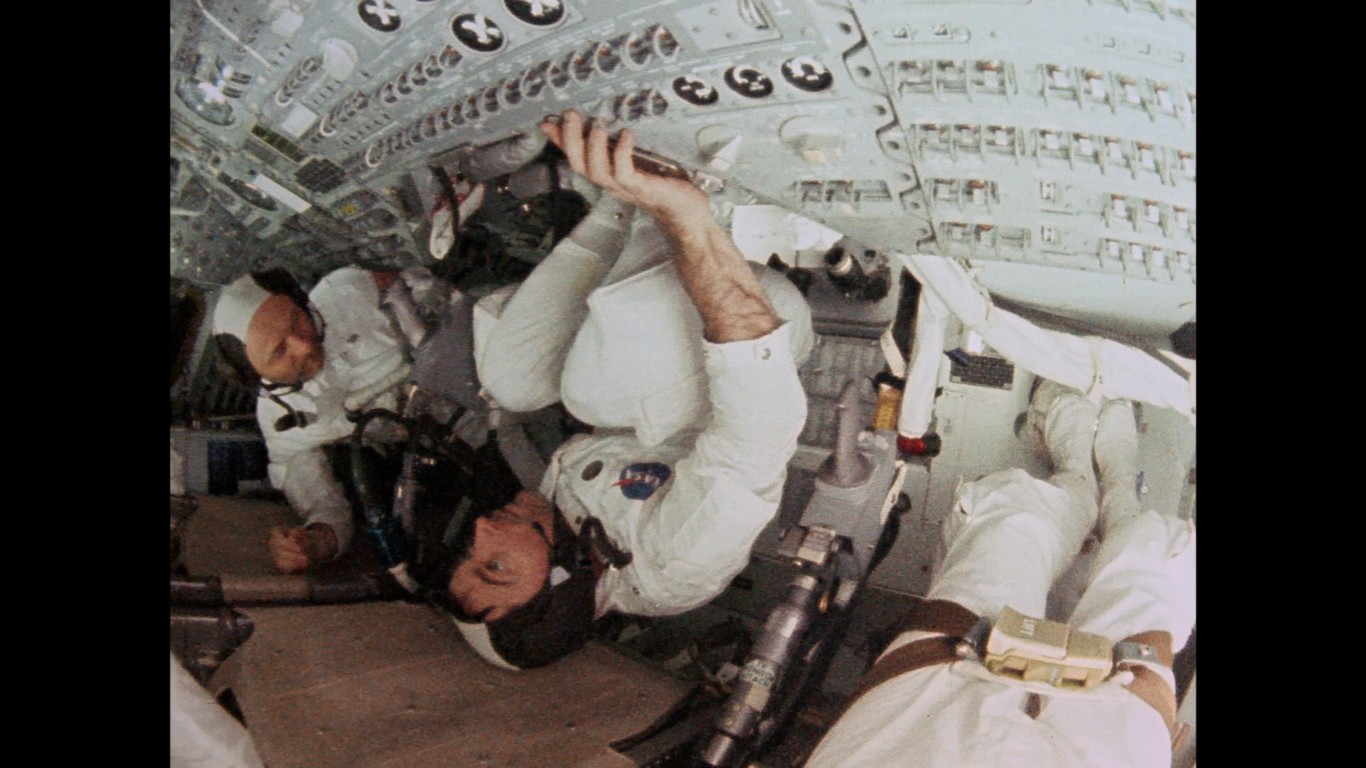 The only faked shot is an image of the moon in daylight through a cockpit window—used to illustrate an astronaut commentary of pointing straight at the moon while waiting for liftoff, when of course all cameras would have been stowed away at that time. Reinhart pasted a picture of the moon over a cockpit window in Jackson Space Centre museum for the shot. Also, Reinhart “could not resist” using footage of an earlier Gemini spacewalk which showed the beautiful curvature of the earth in the background, in glorious Eastman colour. For the first spacewalk footage, he used every frame three times to provide a smoother image from the jerkiness of the original footage.

For All Mankind shows the astronauts being prepared for lift-off, brilliant close up of take-off by the Saturn rocket, the staging process, Bedouin fires in the Sahara, and the receding of the Earth into a beautiful blue marble, a spectacular Earthrise, the famous “one small step…” speech by Neil Armstrong, plus glorious lunar module flights and lunar rover drives across the pristine barren landscape of the moon surface. It’s expertly edited so the astronauts’ audio comments, mixed with the music soundtrack, allow you to immerse yourself in the experience unfolding before you. Gazing at the small blue planet and realising just how precious our home is will never get old… 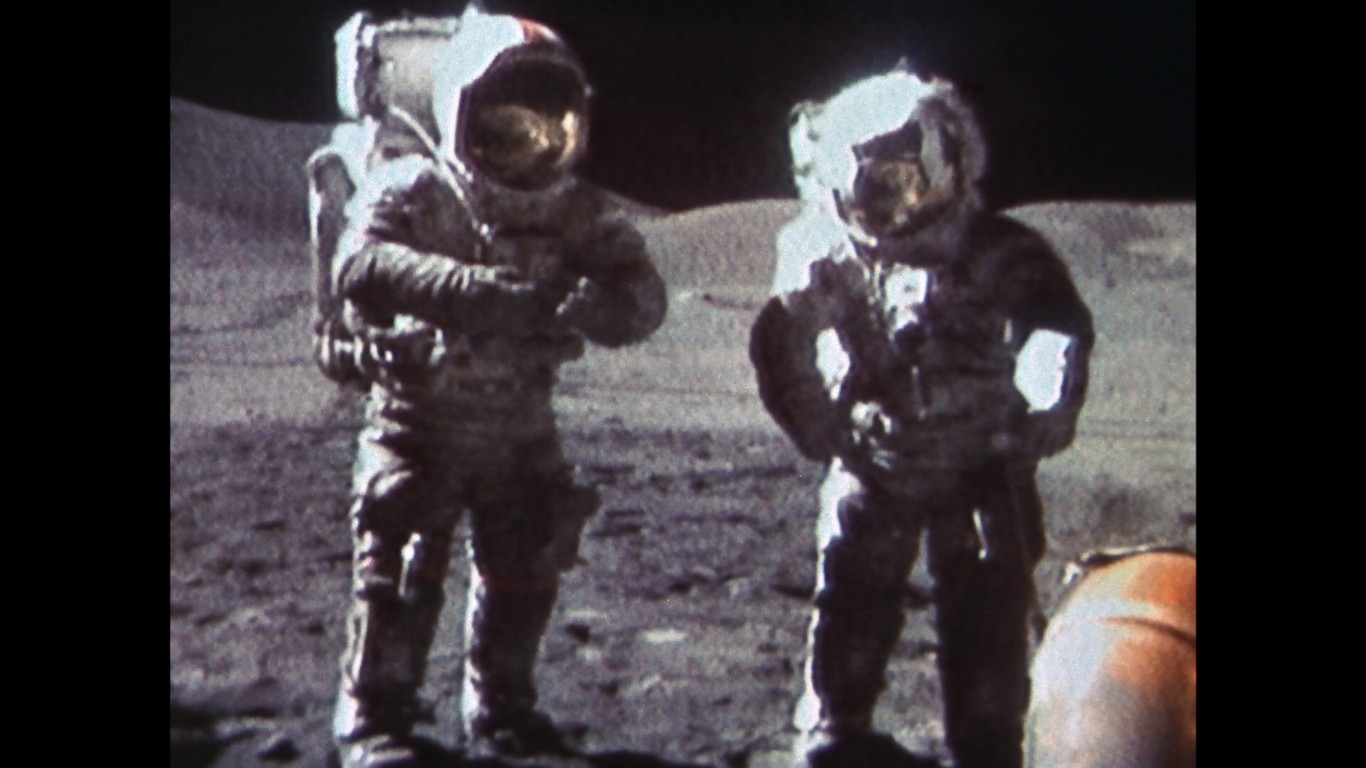 The accompanying 2009 Making-Of documentary, “An Accidental Gift”, explains how the staging footage was shot by cameras placed on the rocket. The film was then jettisoned and returned to earth with its own heat shield, parachute and bleeper, to be caught 10 miles up and 50 miles out from Cape Kennedy by C31 planes using big nets, before the film splashed down into sea water and was thus destroyed!

The ‘accidental gift’ of the title is the beauty of the images captured purely to document the mission for engineering and scientific purposes. The astronauts had been trained to use cameras during the mission and had precious little film stock, but the human impulse to capture beauty such as Earthrise sometimes took precedent. Some astronauts described the actual mission as “hardly real” after all the simulations they’d drilled in advance. But some moments still hit home. Michael Collins recalls turning to look at fellow astronauts Buzz Aldrin and Neil Armstrong on Apollo 11 and the blue marble of the Earth could be seen amongst the black vastness of space in the cockpit window behind them. He remembers thinking “Neil, Buzz, and the three billion people on the earth behind them—that’s all there are.” 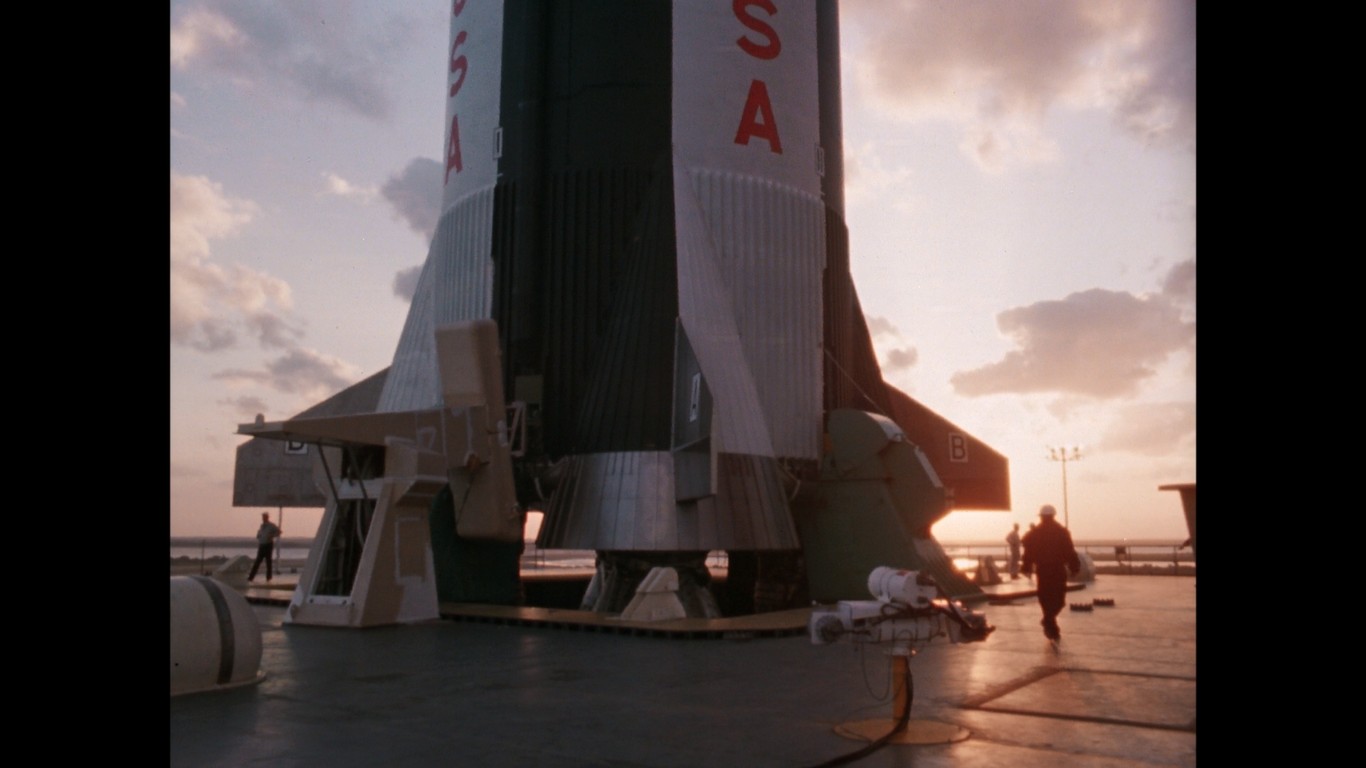 Rusty Schweickart observes all astronauts end up falling in love with an Earth that looks so fragile in the infinite velvet blackness of space “it makes you want to cry.”

The shots of the people at mission control, pencils in hand, discussing mission progress and plotting the lunar module trajectory on a photograph of the lunar surface, reminds you that Apollo 11 was landed on the moon using a then cutting-edge computer system that had about 1,300 times less processing power than today’s smartphones. All those men in 1960’s shirt sleeves manning the consoles deserve our respect—and we share in their jubilation at Neil Armstrong’s announcement “The Eagle has landed.” As one astronaut says, they were glad of the people in the trenches to help them through when emergencies arose. Of course, Reinhart went on to co-write the screenplay for Ron Howard’s movie Apollo 13 (1995), about the most hazardous Apollo mission. That film was nominated for nine academy awards (and won two) the following year. 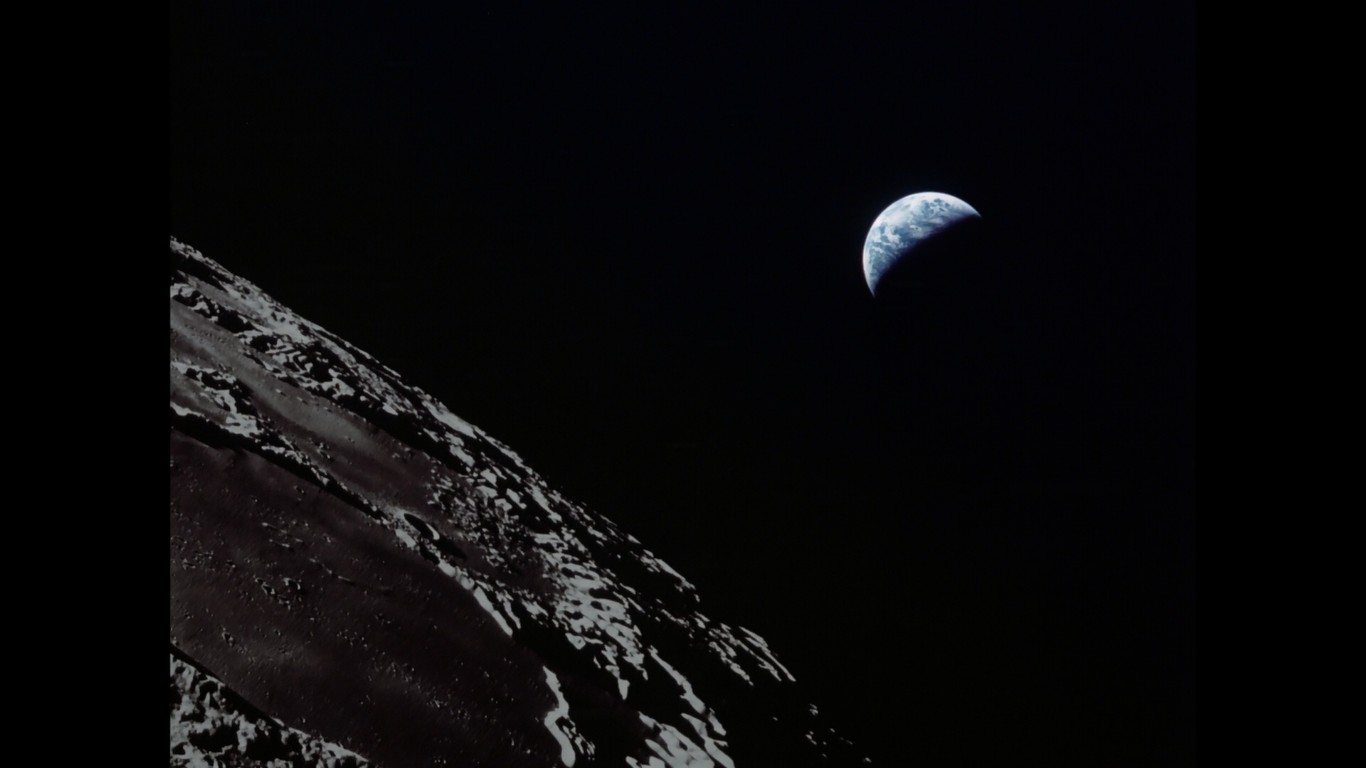 The evocative music soundtrack of For All Mankind was composed by the legendary Brian Eno (the one who wore the feather boa in Roxy Music and helped produce David Bowie’s Low album, amongst many other accolades), along with his brother Roger and production partner Daniel Lamos. Eno spent three weeks solid in the studio after seeing the film to compose the film soundtrack and it’s a serene backdrop to the images. A new limited edition CD, “Apollo: Atmospheres and Soundtrack”, with re-mastered original soundtrack and 11 new instrumental compositions, will be realised on 19 July to commemorate the Apollo landing.

Eno describes watching the Moon Landing in 1969 on a grainy black-and-white TV, then going out to look up at the moon, so small in the sky, with a sense of eerie awe. When interviewed about making the soundtrack, he explained: “we worked around the idea of zero gravity country music, as most of the astronauts took up personal tapes of country music to listen to and they were cowboys on a new frontier.” 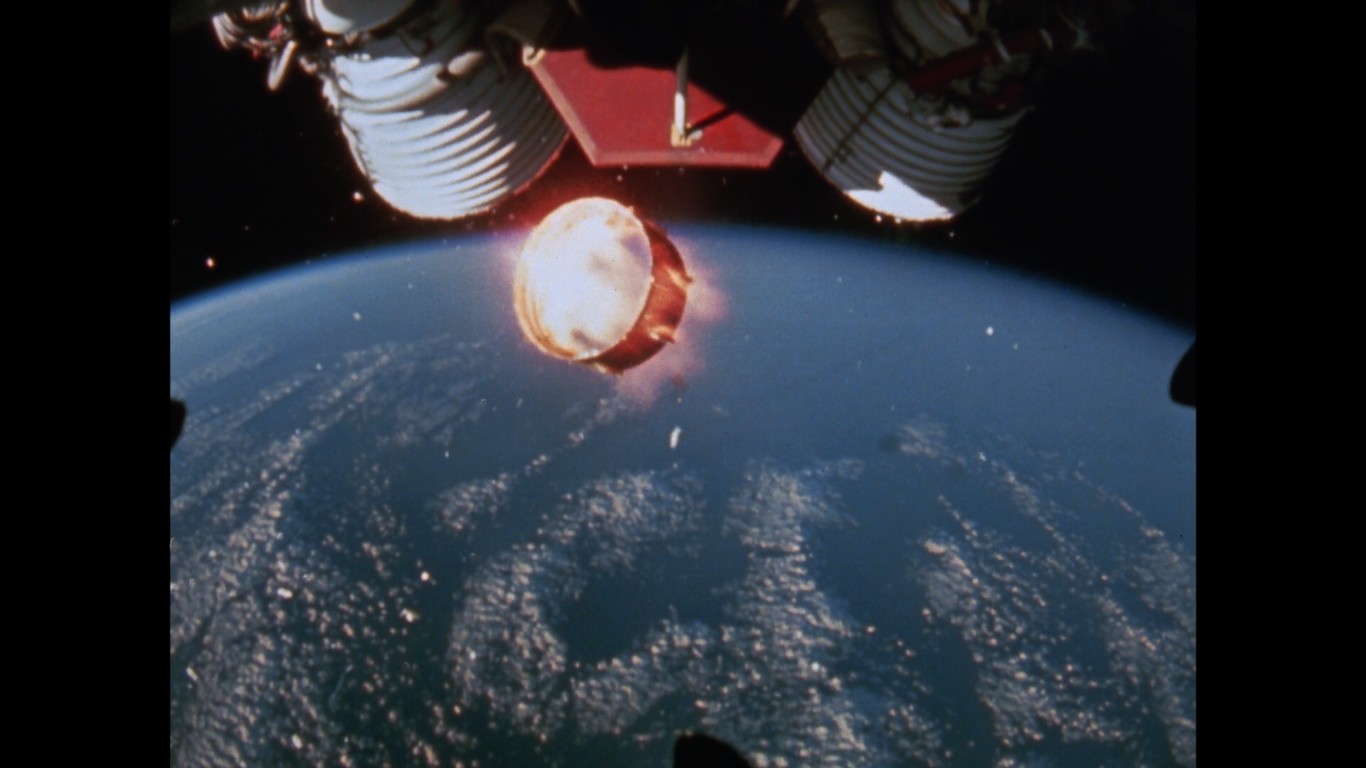 Other extras on this new Blu-ray include a programme about the astronaut turned artist Alan Bean (Apollo 12 and Skylab missions) discussing his paintings. They represent a fascinating personal record of imagery not captured by film footage, a different way to document his and his fellow astronauts’ experiences. One painting is a portrait of Neil Armstrong, taking the iconic photograph of Buzz Aldrin on the surface of the moon, reconstructed from his reflection in Buzz’s visor and what Bean knows of how Armstrong took his photographs.

The film remains a treasure in its new Blu-ray clarity. Maybe some young scientists will be inspired by watching this classic documentary to take man’s greatest adventure one a step further… in our lifetime, please! Here’s hoping we can all, one day soon, look up at the moon with that eerie sense of awe that fellow humans are actually up there, right now, in addition to the six US flags, discarded space packs, and vintage footprints of the Apollo missions. 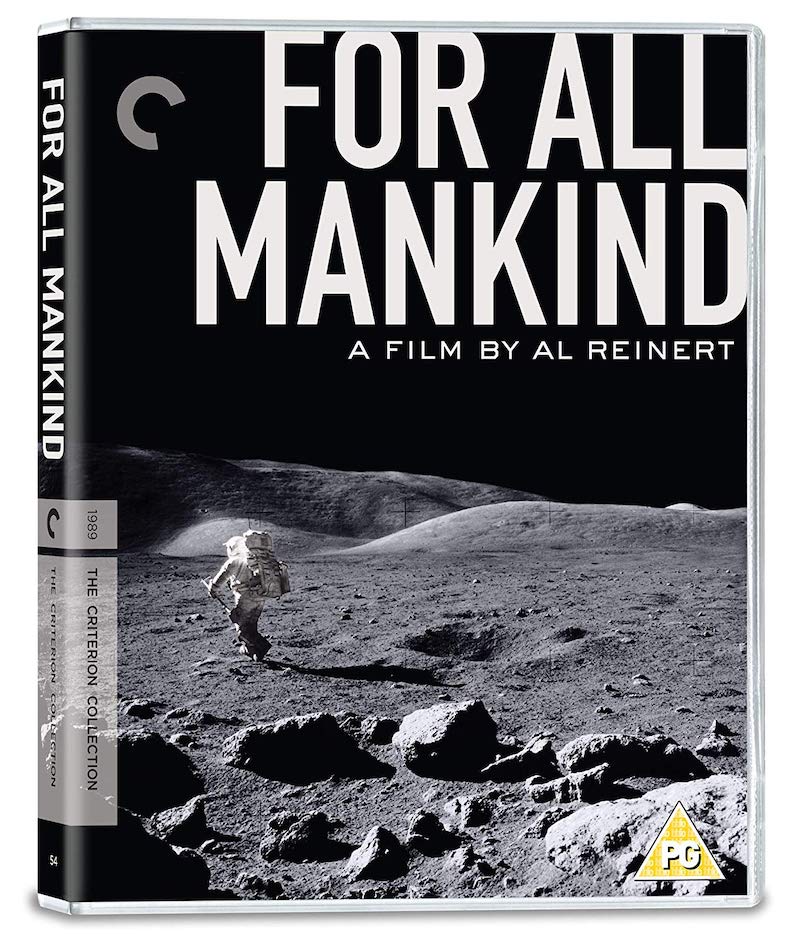