If you were to have only seen the first Fast and Furious movie before checking out this eighth one, you’d have a hard time believing they’re from the same series. The extent to which these movies have changed, while continuing to both earn and cost even more money, is truly astounding. This series now equals Harry Potter as the longest-running single narrative film franchise ever made, and the transformation into outrageousness and wild stunts since Fast Five is what now fuels almost the entire plot.

Once, it was a street racing crime caper, now it’s one of the most consistently ridiculous and oddly heartfelt action franchises around. But, with Fast & Furious 8 (known as Fate of the Furious in the US), it’s evident the fuel’s drying up. It feels like it has most, if not all, of the right ingredients, but even if it follows the recipe faithfully there’s a feeling of overfamiliarity. There are diminishing returns when it comes to upping the ante, perhaps, because this is the first Fast film to disappoint in a long while.

It opens with Dominic Toretto (Vin Diesel) and Letty (Michelle Rodriguez) on their honeymoon in Havana, Cuba — experiencing something that feels close to a normal life. Their bliss only lasts so long. Soon, a mysterious woman known as Cipher (Charlize Theron) finds a way to force Dom to turn against his whole team and work for her cyber-criminal organisation instead. While former team members Brian and Mia have retired for good, Letty, Roman (Tyrese Gibson), Tej (Chris Bridges), Hobbs (Dwayne Johnson), and Ramsey (Nathalie Emmanuel) are all still around. As the previous films have made so clear, Dom’s team is his family, and this betrayal hits them all very hard. Suddenly, instead of working with him to stop a hacker who seems intent on bringing the world to its knees, they’re chasing him because he appears to be working with her to achieve her aim. 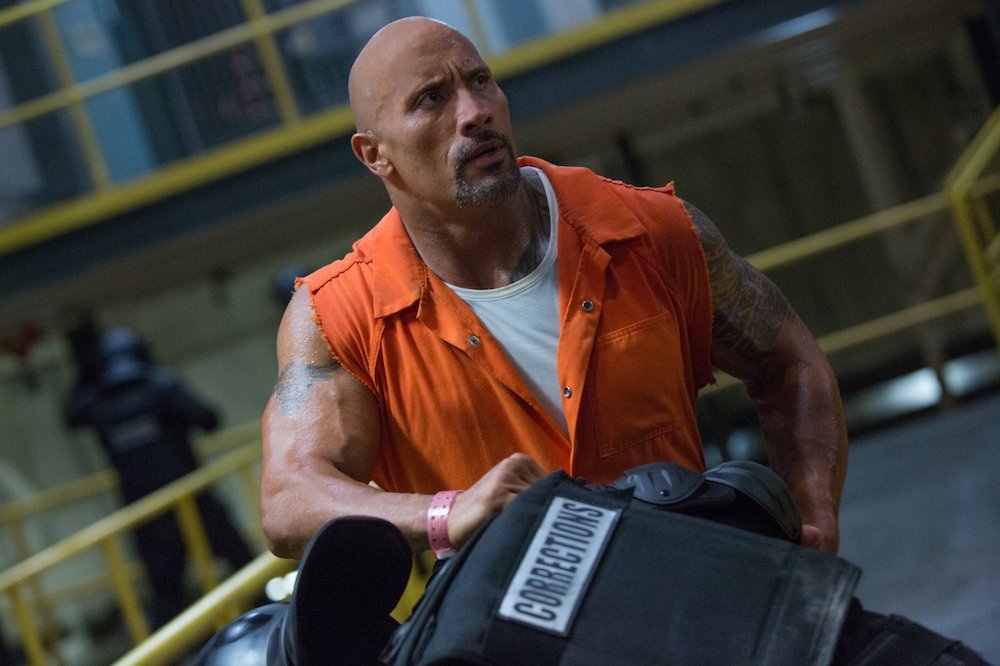 As in any Fast and Furious movie, family is the theme at the heart of everything. It helps that the characters have been together for so long, as most audiences will feel like they know them as people. A little goes a long way, though, and the script hammers home how this team’s a family and that loyalty is deeply important to them too much. Finding Dom without killing him is at the top of their to-do list, which makes for an effective driving force, even if the screenplay is too happy to ignore consequences and the numerous human casualties along the way. The thematic core of family bonds is still worth exploring, but new director F. Gary Gray (Straight Outta Compton, Law Abiding Citizen) doesn’t get as much mileage out of this as James Wan and Justin Lin previously did.

Writer Chris Morgan’s talked about how losing Dom is like losing the foundation of the team, and how this experience is almost like grieving for those he leaves behind. There’s good, soapy drama here. This material is strong on an emotional level because we see how difficult it is for everyone to come to terms with their friend doing such terrible things. But, even as Letty suggests that who they are up against isn’t the “real Dom”, the movie makes it clear he’s very much been forced into this position. There’s nothing quite so silly as hypnosis or brainwashing, and when Fast 8 reveals just what leverage Cipher has to keep Dom in line, it works pretty effectively. This whole situation forces Dom out of his comfort zone and we see him get pushed into frustration and rage in ways we haven’t seen from his typically calm demeanour. 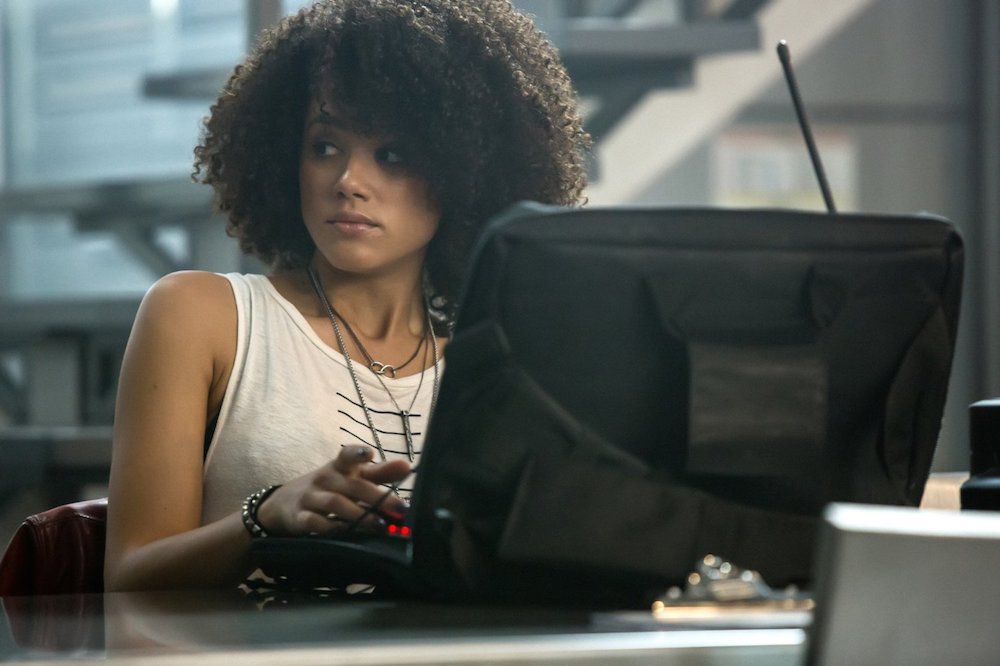 The narrative also adds the interesting layer of seeing much of the plot from the perspective of the villain while Dom’s under her control. But while adding Charlize Theron to the cast, straight after her iconic performance as Furiosa in Mad Max: Fury Road, was a stroke of genius, she’s easily the most wasted cast member. Theron shows so much promise as this outing’s big bad, but there’s not enough in the script to firmly establish Cipher’s motivations or bring enough depth to her villain. This is an area where Fast 8 is sorely lacking, as cyberterrorist Cipher should be a formidable new adversary but ends up only leaving slightly more of an impact than some of the franchise’s previous baddies.

While she gets some reasonably good heavy-handed villain monologues, she spends most of her time hacking by typing really fast, or getting other people to hack by likewise typing really fast. Both Deckard (Jason Statham) and Owen Shaw (Luke Evans) were more effective as rivals to Dom’s team, so Cipher definitely leaves us wanting more. There’s nothing wrong with Theron’s performance, which is just about over-the-top enough to be in keeping with everything else happening, but everything about Cipher feels oddly rushed for a movie over 2 hours long.

Also, one of the strange quirks of Fast 8 is that by bringing back Statham (playing the villain from the last instalment, now enlisted to help the team search for Dom), it ends up getting in the way of its themes of family and loyalty. Statham feels like he’s playing a completely different character than he was before, almost entirely out of necessity. It wasn’t so long ago that he killed Han (Sung Kang), blew up Brian’s house, and killed numerous people at a hospital. It’s crazy that this film exists without him being truly held accountable for his murderous past, stuff that directly affected all the main players. It seems the temptation to bring Statham back into the fold and have him crack wise with Dwayne Johnson was too great, because it’s really difficult to believe the team would let bygones be bygones. Perhaps we just have to write this off as a very comic book-y twist and hope that it makes more sense in future films, but it does jar. 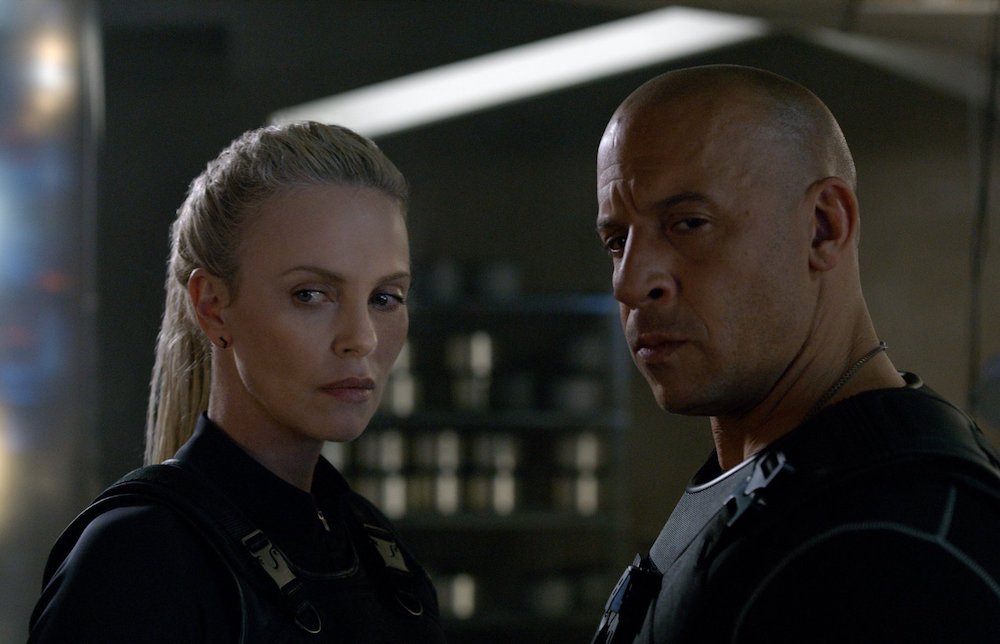 Even if that doesn’t bother you, and you’re just a fan of these movies because you love preposterous action sequences, you might still be disappointed. Fast 8 certainly works hard to go even bigger than ever before, with a climax involving a nuclear submarine and a set piece that sees the destruction of much of New York with remote-controlled cars, but it also feels more sterile and dull than anything that’s come before. Some of the fun of the outlandish action has worn off by now. Disappointingly, this is the closest a Fast film has ever come to looking like a movie from the Transformers franchise; it’s full of incomprehensible close-ups, shaky-cam, and quick cuts. It’s a style that also carries over into the hand-to-hand combat. Most of that action ends up feeling poorly executed, although there are at least some top-notch scenes that rely on the physical talents of Statham.

There’s still something compelling about watching this team work together in what’s essentially just a superhero team of professional drivers, so while it’s not as good as the last few instalments it’s not completely without merit. Fast & Furious 8 makes bold decisions with recurring characters, and many of them pay off, especially when it comes to exploring the family dynamic and the extent to which they can rely on loyalty. It may be franchise fatigue setting in, as it’s hard not to wonder just how many more sequels The Fast and the Furious saga can realistically spawn without overstaying its welcome.