When one takes a step back and considers the impact Walt Disney’s had on pop culture, it’s almost incomprehensible. Not only have his ideas shaped the childhoods of millions worldwide (and let’s be honest, adult lives too), but his values and storytelling gave life to animation since 1928’s “Steamboat Willie”. Since then, the Disney brand’s gone from strength to strength, with global domination through its TV networks, film studios, theme parks, home media releases, toys, and more.

However, Disney of the late 1980s and early-1990s was very different from today. That’s not to say the studio didn’t have their successes, but that came from a more focused attack on animation than the massive multimedia swarm they now control. I consider the era from Oliver & Company (1988) to The Lion King (1994) to be my era, where I was most excited as a child to go and see Disney movies at the cinema. And what a run it was, including The Little Mermaid (1989), Beauty and the Beast (1991), and Aladdin (1992)—which have all become some of the most loved and quoted films of all time. The following decade would become a questionable period in Disney history, with less appreciated fare like Dinosaur (2000) and Home on the Range (2004), making audiences wonder if the magic had finally run out. 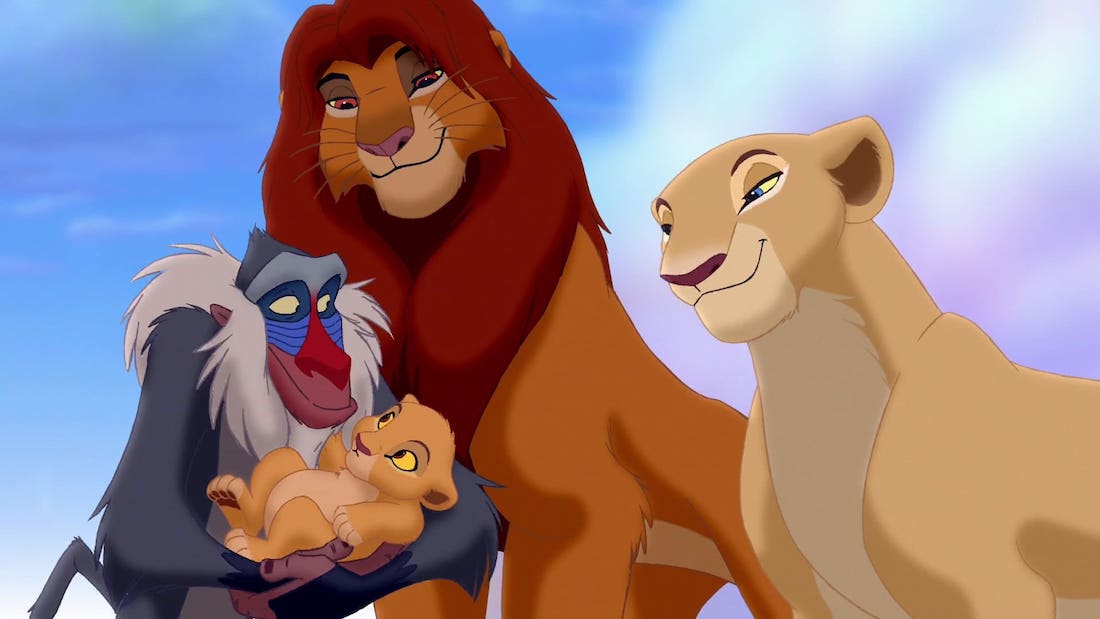 With the success of The Little Mermaid came a re-energised enthusiasm for animation, particularly from Walt Disney Animation Studios. The Rescuers Down Under (1990) can be considered a blip but Beauty and the Beast more than made up for a few years later. A huge critical and commercial success, it was even nominated for the ‘Best Picture’ award at the Academy Awards. Disney may have lost out to The Silence of the Lambs (1991), but Beauty and the Beast made history and all eyes were back on Disney, as Aladdin became the highest grossing animated film of all time. But only for a few years. Enter Simba.

Disney’s reputation was built on adapting existing stories and turning them into animated features. Whether it be Snow White, Alice in Wonderland, or Winnie the Pooh, audiences were often familiar with the basic story they were going to see. What made The Lion King stand apart is how it wasn’t based on someone else’s work, although there are obvious inspirations taken from Shakespeare’s Hamlet. Disney took a gamble on an idea that had been floating around since the late-’80s, with Chairman Jeffrey Katzenberg excited about setting a tale in Africa and making it both personal and political, allowing audiences to engage with the animals on a more human level. 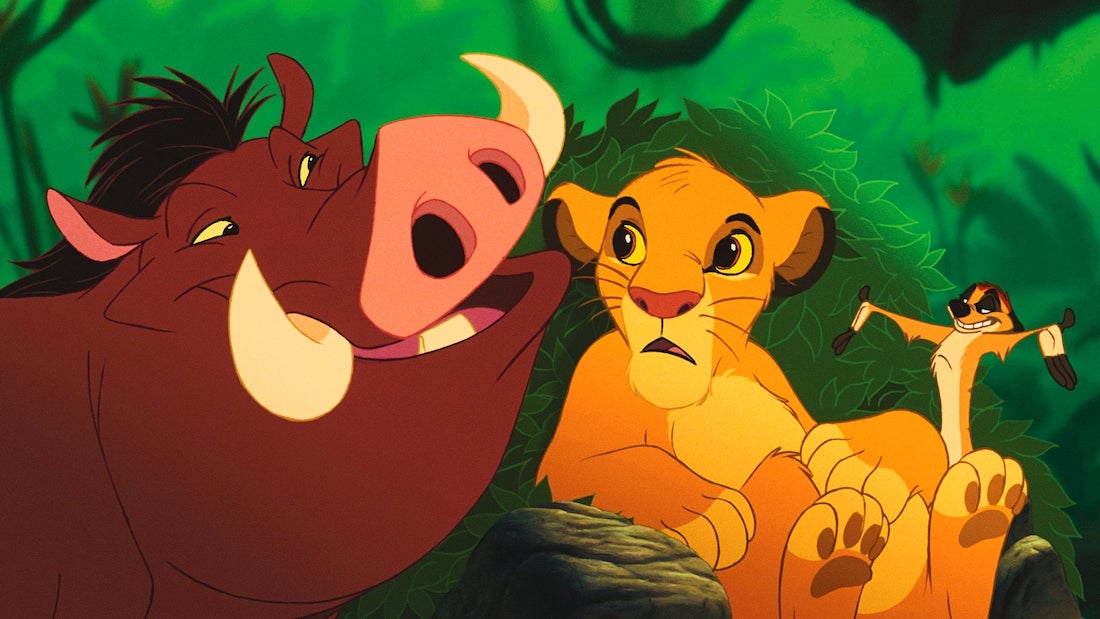 Viewing the movie now, as an adult, is a whole new experience to when I saw it the first time. And that’s what Disney films are all about. They have an appeal on different levels, allowing the entire family to enjoy their time together. One thing that strikes me about The Lion King is just how beautiful it is, with each scene painstakingly crafted to capture the African plains and the vast kingdom the story takes place in. Directors Rob Minkoff and Roger Allers did a stellar job balancing the personal tales with the epic nature of a place we’ve rarely seen represented in animation. Whether you’ve seen The Lion King in the original 2D or the newer 3D version, it’s a visual treat and the sound effects enhance those senses of excitement and danger throughout. It’s one of those cases where everything comes together to create a true spectacle.

The best Disney films not only delivers cutting edge animation but back things up with emotional storytelling and unforgettable soundtracks. Before anyone had even seen the film, it seemed like a success waiting to happen on paper alone. Not only did the cast feature well-known talents like James Earl Jones, Matthew Broderick, Jeremy Irons, and Rowan Atkinson… but the songs fell into the hands of the legendary lyricist Tim Rice and one of the most successful performers of all time: Elton John. With Hans Zimmer composing the musical score, a formidable team was formed and expectations were certainly high. To everyone’s surprise The Lion King managed to surpass all of them. 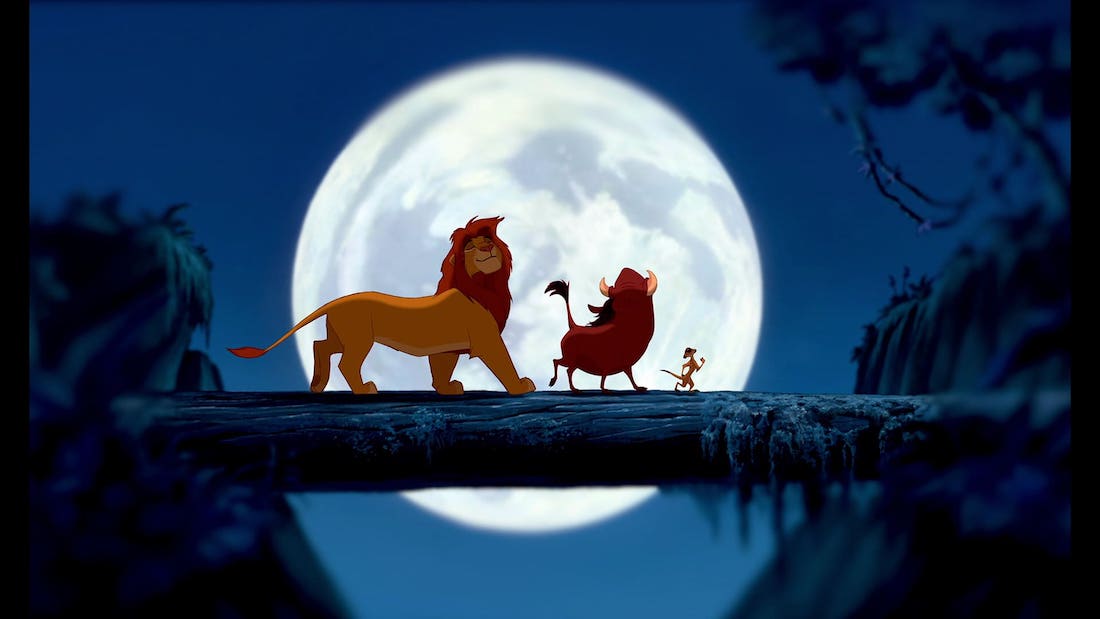 At a concise 88-minutes, The Lion King manages to pack in a lot into its plot. The audience gets to follow Simba (Jonathan Taylor Thomas/Matthew Broderick), a lion whom we follow from birth through his voyage of self-discovery to fulfil his destiny as the eponymous King. His birth angers his jealous uncle Scar (Jeremy Irons), who’s lost his change to reign and now aims to plot against his youngest nephew and his brother Mufasa (James Earl Jones). If you’re familiar with Disney films then the tragedy that transpires will be of no surprise as they love traumatising children, and Simba is soon on his own and full of self-doubt and blame. From there blossoms one of my own personal favourite friendships in all of Disney as he finds Timon (Nathan Lane) and Pumbaa (Ernie Sabella), who look to get him back on the right track. From there he finds love with Nala (Moria Kelly) and returns to confront his uncle and claim his rightful place on the throne.

The screenplay by Linda Woolverton, Irene Mecchi, and Jonathan Roberts almost makes you forget you’re watching a film entirely without human characters. Everyone has such relatable traits and believable relationships that you really care about them. In Simba, you have someone so likeable and true to himself that you genuinely want him to succeed, and he surrounds himself with supportive and enthusiastic friends. The entire message behind The Lion King is one of positivity and sometimes we all need that in our lives. I still laugh at the stupid meerkat and warthog, gasp at Scar’s behaviour and smile my way through a singing Simba all these years later. 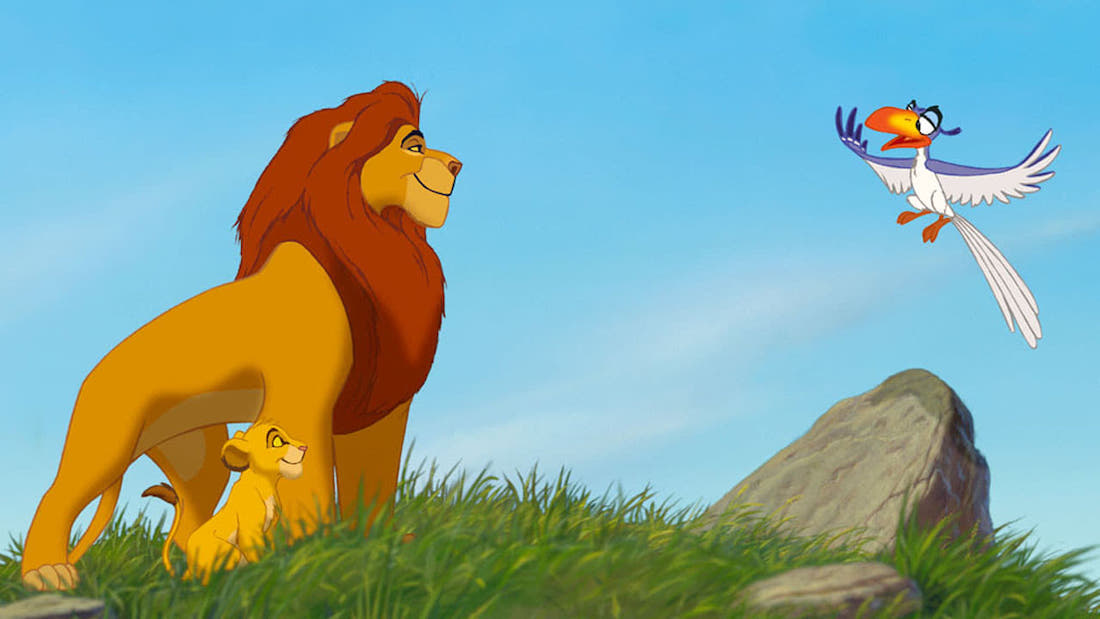 I could probably write a separate piece about how incredible the soundtrack is. “Hakuna Matata”, “Circle of Life”, “I Just Can’t Wait to Be King”, “Can You Feel the Love Tonight”, and even “Be Prepared” are all epic songs that stir up emotions to this day. Some are toe-tapping classics that put a big smile on your face, while others evoke the beauty of relationships and family. It’s a real testament to everyone that worked on The Lion King that these songs remain so fondly remembered and continue to be played a generation later. The film wouldn’t be half as effective without the impact of its music during Simba’s journey.

The cinema release was only the start of The Lion King’s lasting legacy, with numerous successful home releases on various formats allowing those who saw it first time round to share it with their own kids. A number of film sequels, a TV series sequel, and this year’s upcoming CGI remake from Jon Favreau, have allowed Simba and his story to live on in ways that Walt Disney could never have dreamt of. A stage adaptation was launched in 1997 and is still showing today, as well as a number of musical shows at the Disney Parks. The Lion King absolutely remains up there with the best and there are no signs of it slowing down anytime soon.

VALERIAN AND THE CITY OF A THOUSAND PLANETS (2017)