The late Tom Clancy was a master of political fiction; an internationally bestselling author whose legacy posthumously transformed him from icon to institution. Clancy today has since become brand, with today’s youth associating ‘Tom Clancy’ more with multiplayer first-person video games than espionage novels.

So, when it comes to Tom Clancy’s Jack Ryan on Amazon Prime, audiences will experience something closer to the brand than the Cold War-era literary source. Make no mistake, that’s not a backhanded criticism. On the contrary, season 2 of Jack Ryan’s an enjoyable globetrotting adventure that honours both the brand and the books. For fans of the first season, this sophomore run delivers more thrills, a chewier plot, and a protagonist who’s maturing into a full-blown hero. For newcomers, now is surely the time to let Jack Ryan become your next streaming favourite. 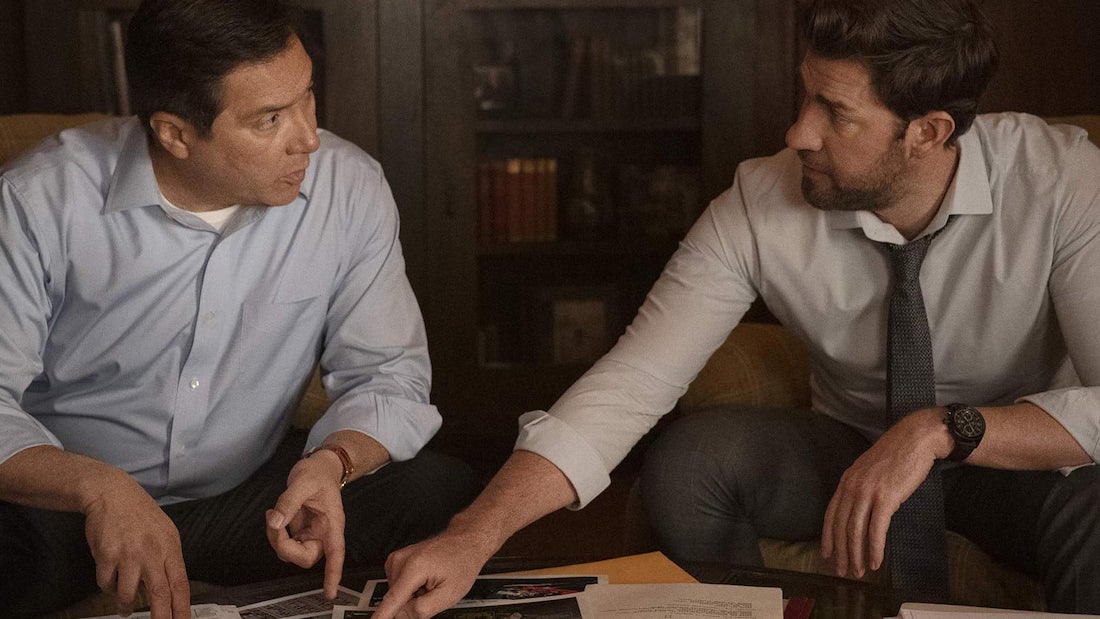 One of the most common criticisms of Jack Ryan’s first season was its reliance on a central plot that was mostly a retread and repeat of abused stereotypes (Middle Eastern terrorists targeting Americans with a chemical weapon). This critique hasn’t fallen on deaf ears, as season 2 takes the action in a new and less cliched direction.

As the second begins, we find Jack (John Krasinski) no longer behind a desk at Langley, Virginia. He’s not yet dodging bullets and beating confessions out of would-be terrorists either. Dr Jack Ryan, PhD in Economics, is teaching a full class in a CIA auditorium when we’re reintroduced to him. While the lecture fits the classic mould of Clancy’s hero, it also serves a nice bit of foreshadowing of where the story’s central conflict will be found.

Also established in the first episode is Jack’s deep friendship with Jimmy Moreno (Benito Martinez), his former Marine Corps commander. Moreno is now a US Senator and Jack is “on loan from Langley” to advise Moreno and the rest of the Senate Intelligence Committee. Following a hunch from Jack that the Russians are selling new missile tech to an unfriendly and unstable government in Venezuela, Jack convinces Moreno and the chair of the Committee to send a small group to quietly investigate under the guise of a diplomatic mission. 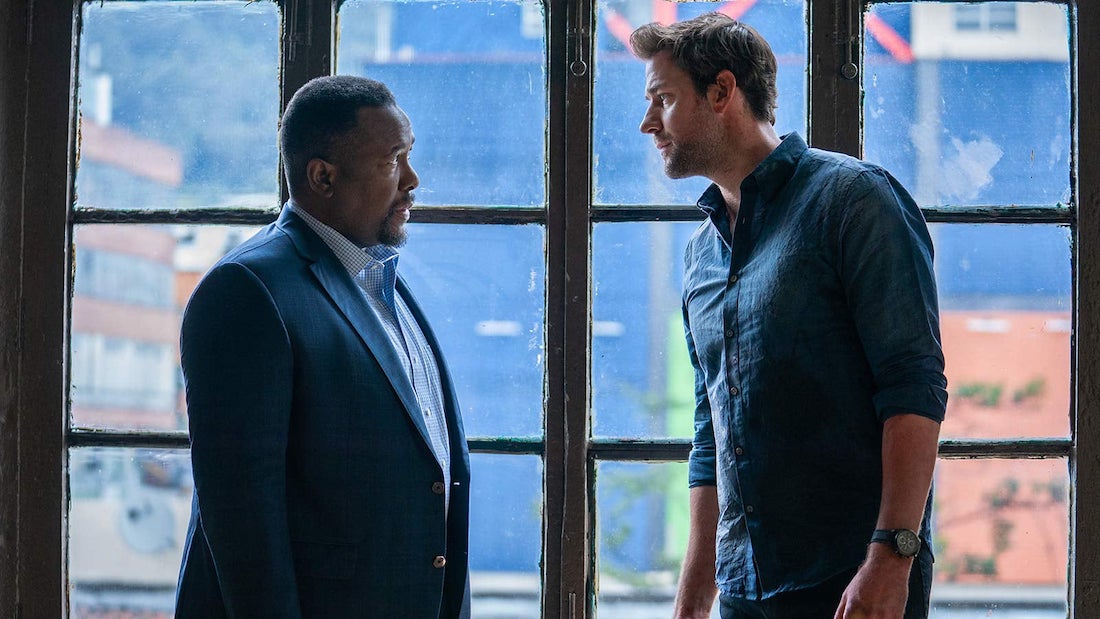 However, Jack manages to rattle the cage of the Venezuelan strongman and President, Nicolas Reyes (Jordi Molla), and the trip soon turns deadly. After an attack on their convey kills Moreno, Jack goes on a personal vendetta to find the forces behind it and make them pay.

This time Jack’s enemies are cloaked better from the viewers even while some hide in plain sight. Tactical mistakes and ruthless betrayals creep around every corner and Jack’s tenacity could either win the day again or get him killed. The setting and circumstances may surprise the casual observer of international politics, but the current relevancy of show designed to entertain and not educate is striking.

Season 2 also raises the talent level of the show’s supporting cast. While the first season had some standouts, this latest season brings along better talent with meatier roles. Among the best of the returning cast is Wendell Pierce, with the veteran actor playing Jim Greer, Ryan’s closest ally and a pivotal character. Pierce is one of the best TV actors working today and rarely gets the credit he deserves. From HBO’s The Wire to USA’s Suits, Pierce is likely more familiar to most audiences by face than by name. 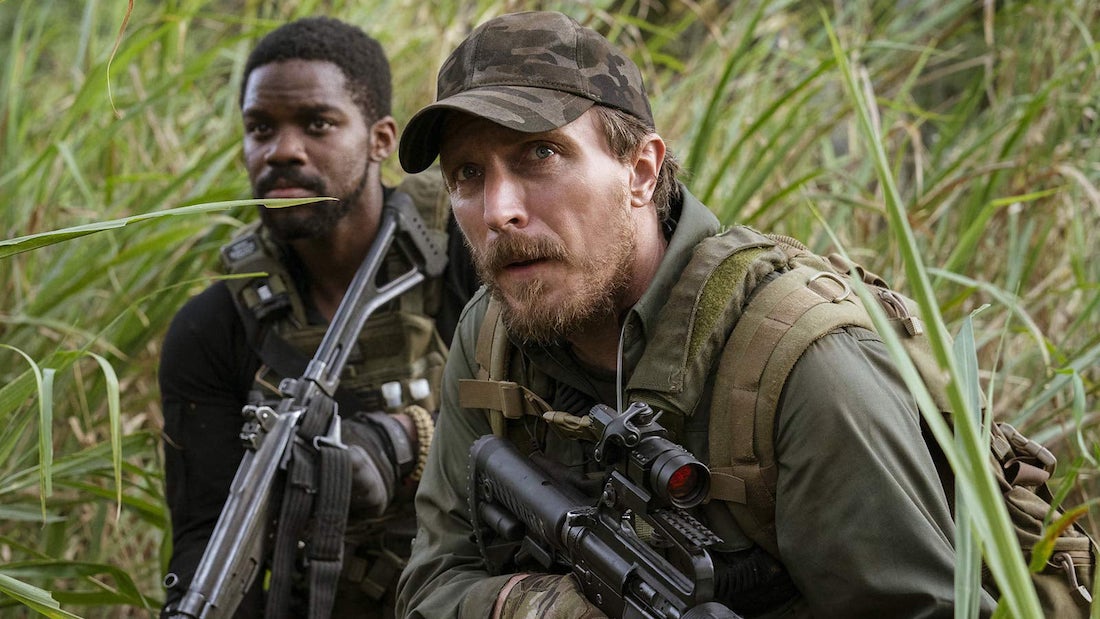 In Jack Ryan, Pierce brings a constant intensity to Greer, who’s both gritty and likeable. This version of the character gets his hands dirty far more than in Clancy’s novels, but that’s a welcomed change that allows Ryan and Greer to share a lot of screentime together. As was the case in season 1, Greer and Ryan must rely on each other with their very lives and, although trust doesn’t seem to come any easier the second time around, their partnership’s built for the long run.

Noomi Rapace (Prometheus) proves to be an excellent new addition to the cast as Harriett Baumann, a mysterious figure who befriends Jack while keeping her own secrets close to the vest. Her true allegiance is cloudy and whether Jack can trust her or not proves to be one of his most pivotal decisions.

Michael Kelly (House of Cards) plays CIA station chief Mike November, a character that could’ve been ripped from one of Clancy’s pages. From his smirk-worthy name to his conflicted motivations and questionable ethics, November’s the perfect CIA officer for this universe. Kelly tends to be a scene-stealer in the later episodes as his role and importance to the plot is expanded.

Loyal fans of the source material will note the absence of Covert Ops man John Clark from the series. The closest thing so far has been Matice (John Hoogenakker), who’s one of the most consistently flamboyant characters. As was often the case last season, Hoogenakker gets to deliver many of the season’s best one-liners and quips. However, his character arc’s likely to frustrate some fans and does leave questions hanging for the show’s third season. 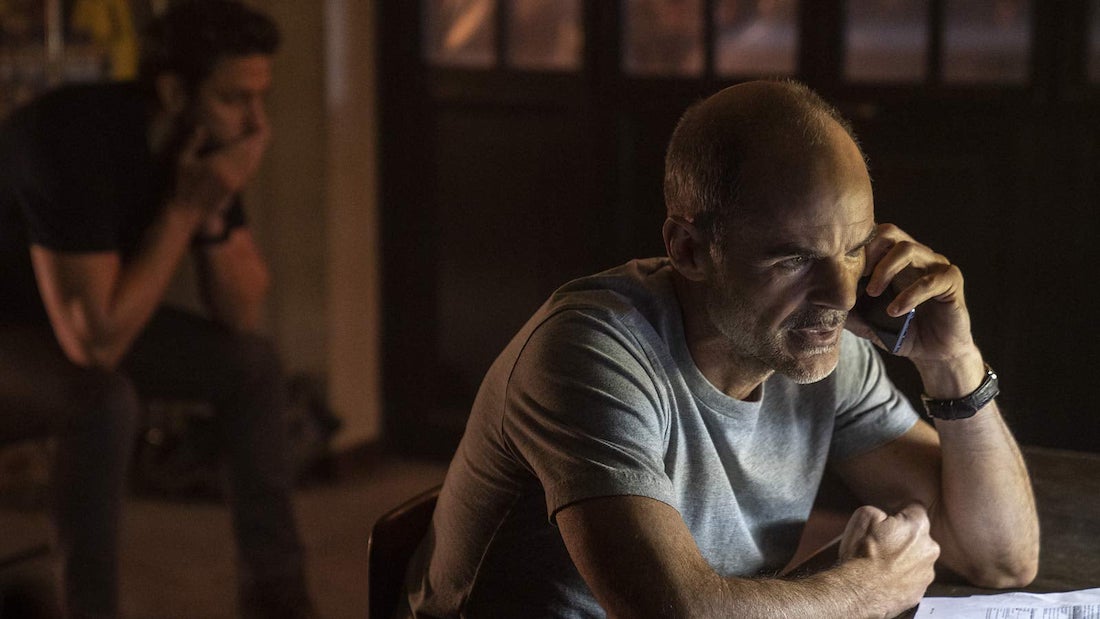 The most notable absence among the supporting cast is Abbie Cornish (Sucker Punch), who played Jack’s season 1 love interest, Dr Cathy Mueller. In what could be a significant break from the source material, Cornish is nowhere to be found in season 2. Moreover, Dr Mueller isn’t mentioned … not even in passing by Jack or anybody else. It seems clear the two are no longer in a relationship, but what happened is anyone’s guess at this point!

This is another element that may prove vital to the third season of Jack Ryan. In the books, Mueller and Ryan get married, have a family, and she proves to be more than just the hero’s loyal wife. While many viewers and critics alike have noted the character’s absence this year, no one from the show has offered to clarify if this was a creative choice or down to a scheduling conflict with Cornish. As the season plays out, its easy to see how Mueller’s inclusion would feel forced given the nature of the action and where it takes Jack. Nonetheless having her reduced to a ‘she-who-shan’t-be-named’ status after her critical role in the first season is just plain odd.

After eight successful seasons of NBC’s The Office, John Krasinski became so widely recognised as his small-screen alter-ego that many people thought his name was Jim. Even for those who know an actor is more than the characters they portray, few would likely see Krasinski as little more than a TV funnyman. But starting with 13 Hours (2016), Krasinski began a metamorphosis that would both transform him physically and change his career path. Like the seismic professional shift made by Chris Pratt (who played a chubby goofball on NBC’s Parks and Recreation), Krasinski demonstrated both his serious side and seriously fit new body as a soldier-turned-military-contractor in 13 Hours. 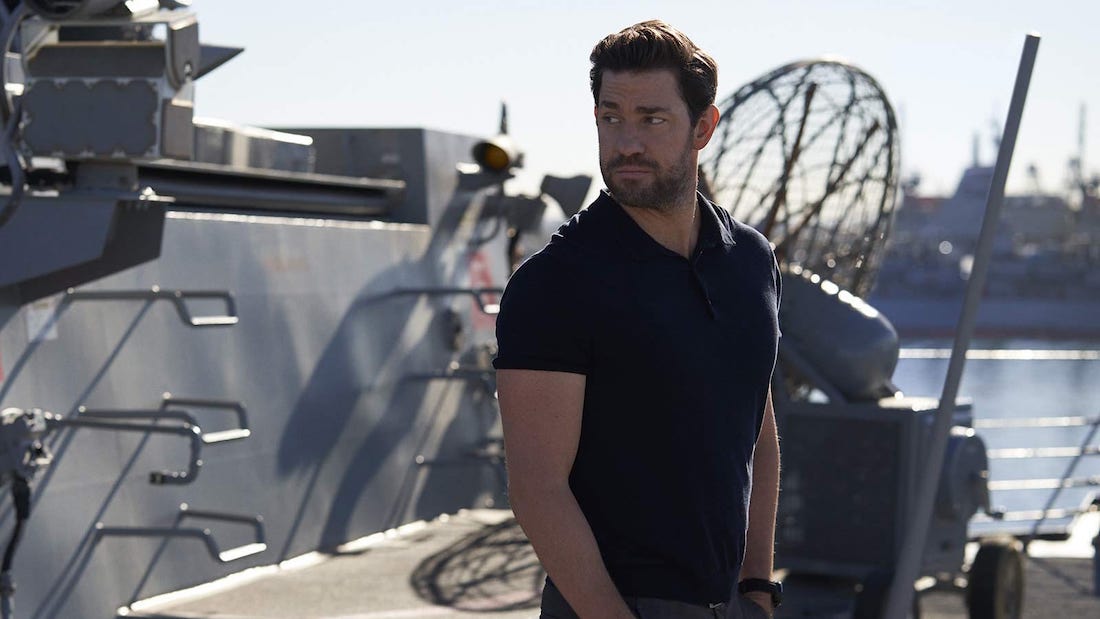 And while the film wasn’t enough to convince audiences Krasinski could more than just that loveable salesman from Dunder Mifflin, Krasinski exercised his dramatic acting chops with A Quiet Place (2018). Even working on both sides of the camera, the former sitcom star cemented his place as a serious creative force.

If The Office’s Jim Halpert was the juvenile version of Krasinski, then Jack Ryan is the man fully grown. With season 2, he plays a more confident and cocksure hero who uses the lessons learned from his first foray into the world of covert ops into a former analyst who has the brawn of James Bond with the brains of Sherlock Holmes.

In season 1, Ryan stepped gingerly through most of the season and he stumbled his way in pursuit of a dangerous terrorist cell. In the second season, he leads the charge with others (including his one-time boss Jim Greer) tagging along in tow. It’s a big jump for the character between seasons, but one that is necessary to keep audiences hooked on the central hero. Without making the big step forward, Jack Ryan would run the risk of being viewed as the tag-along younger sibling to a global thriller where all the other players are more confident to manage the crisis. 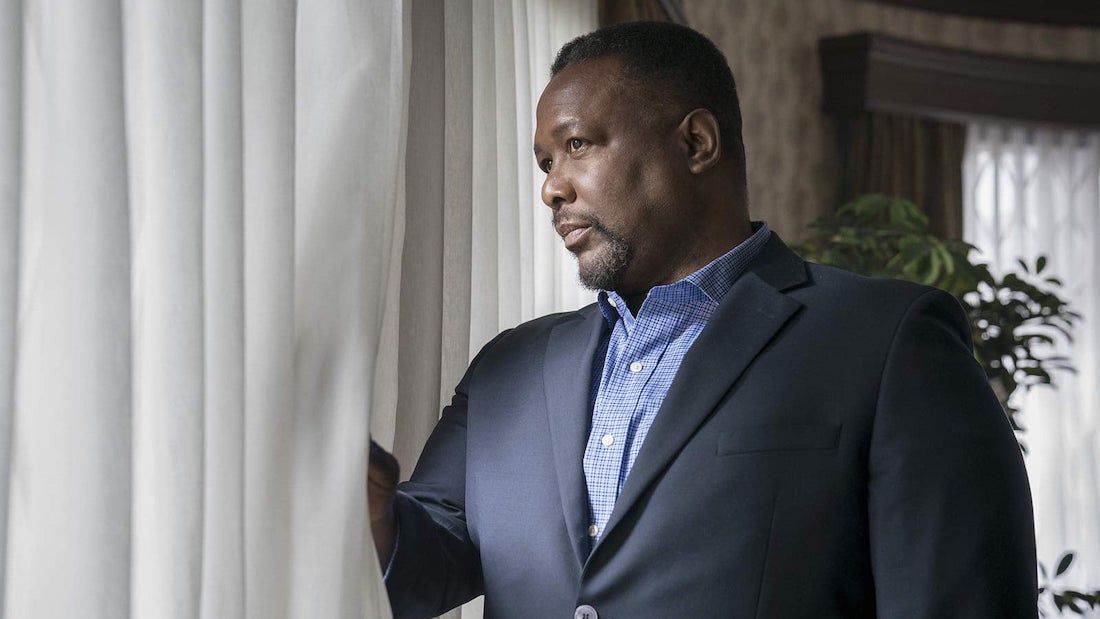 Instead, Jack Ryan is the unchallenged hero of season two and move throughout the story with a level of both confidence and reckless abandonment not seen in the first season. This is an intentional leap that likely started in the writer’s room with Graham Roland and Carlton Cuse. The two men previously worked together on ABC’s Lost, with Roland also having previously written for Fox’s Fringe, and have woven a tight arc for the season that manages to layer the levels of conspiracy without losing the audience.

In the end, whether a viewer appreciates the complexities of modern international politics or not is essential to enjoying season 2 of Jack Ryan. Plenty of viewers will be happy to be on the ride with the titular hero because of Krasinski who plays Ryan now as a fully realised character with the assurance of understanding who he is and where he’s going.

He’s neither 24′s Jack Bauer or Homeland’s Carrie Mathison. Jack Ryan is something of a blend of both and at the same time something entirely new. Whether or not the series will enjoy the type of longevity that 24 (10 seasons) and Homeland (8 seasons and counting) have enjoyed. Thus far, Amazon has been bullish on the show’s future has announced its renewal for an additional season even before the debut of the current one. And Krasinski continuing to expand his professional repertoire (he’s written and is currently directing the sequel to A Quiet Place and serves as a producer for Jack Ryan) the future of the show clearly rests largely in his hands.

Given those odds, if there is a heaven above, one must imagine Tom Clancy looking down through his signature square-framed glasses with a big smile. 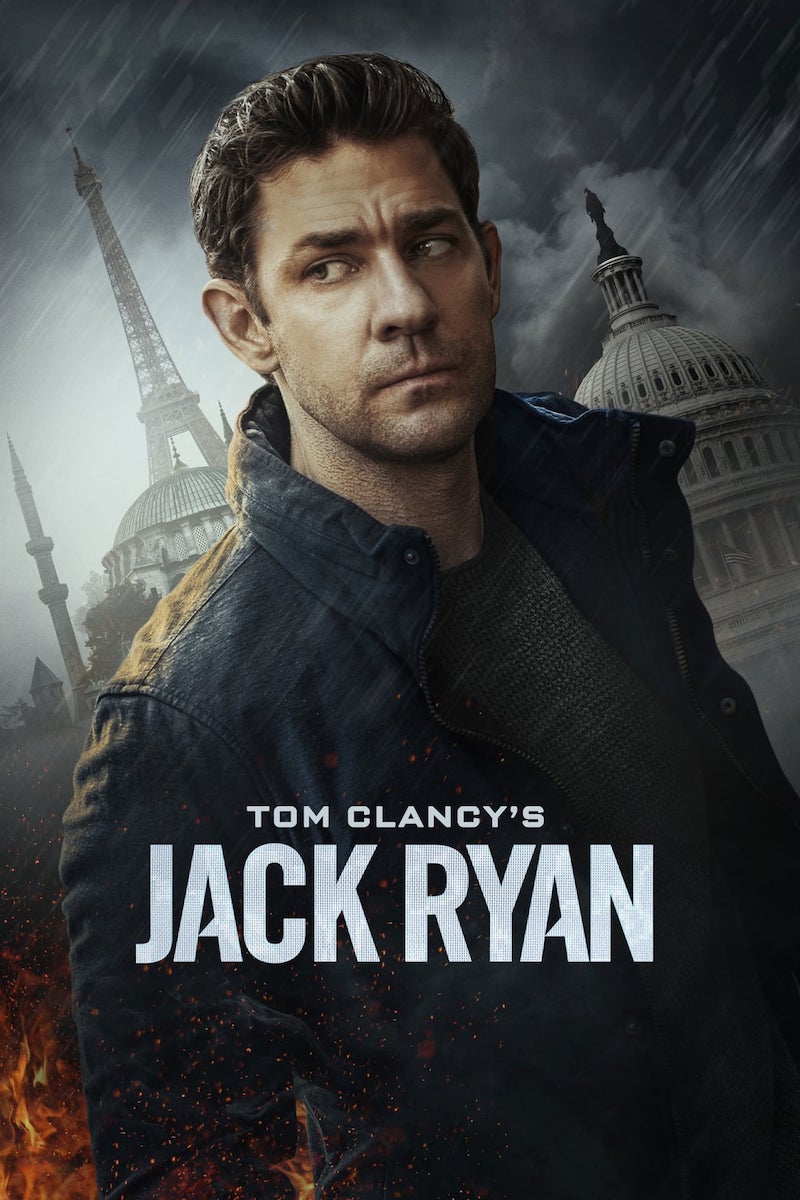