John Cleese had to move out of two shadows in the 1980s, following the end of Fawlty Towers in 1979 and Monty Python’s final movie The Meaning of Life (1983). He got his chance when a screenplay by playwright Michael Frayn (Noises Off) arrived on his doormat, about a punctilious headmaster whose life unravels when he’s late for a conference. Cleese jumped at the chance to take on his first leading role in a movie.

Frayn had written the script (then titled Man of the Moment) on spec, inspired by his own inability to catch trains on time. His theatrical producer Michael Codron thought it was worth giving the world of movies a try, and legendary TV producer Verity Lambert (working as EMI Films’ head of production) bought the script and hired Cleese to star. Christopher Morahan was then chosen to direct the movie, retitled Clockwise, partly because he’d recently directed Frayn’s adaptation of Chekov’s Wild Honey for the stage, which Cleese had enjoyed on a night out. 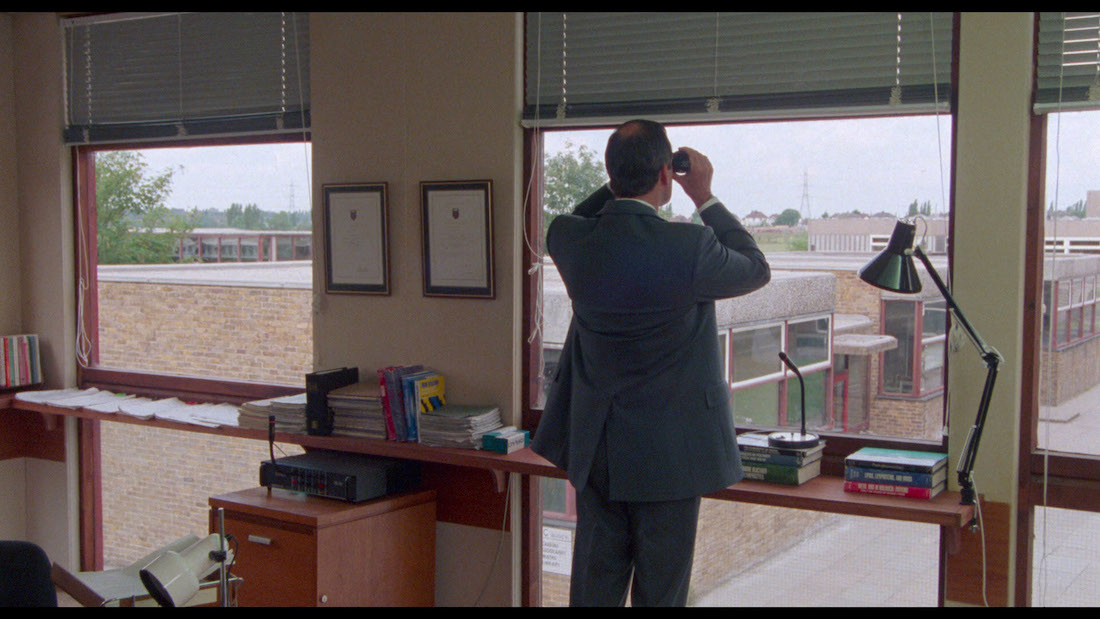 Clockwise concerns a highly organised and punctual man called Brian Stimpson (Cleese), who’s managed to turn around the fortunes of a failing comprehensive school through strict discipline. He keeps order in the playground by snooping on pupils through binoculars from his watchtower-like headmasters’ office, while ensuring every minute of his time is carefully managed with the aid of a large wall chart and computerised timetable (cutting-edge for ’86).

Stimpson’s meticulousness fails to help him, however, when he gets on a train bound for Plymouth and not Norwich, where he’s due to give a speech at a prestigious Headmasters’ Conference as their newly elected Chairman. And when his speech gets mislaid and he can’t find his wife Gwenda (Alison Steadman) to help, Stimpson hijacks a car belonging to the father of a pupil called Laura Wisely (Sharon Maiden) and persuades her to get him to Norwich before his five o’clock deadline. 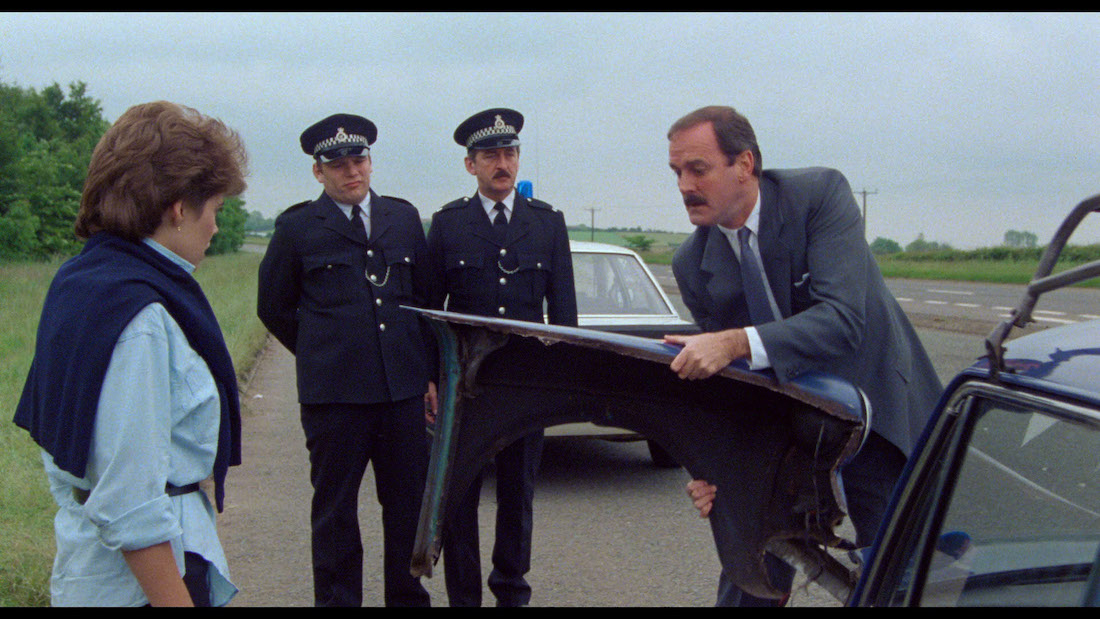 It’s surprising to learn that Frayn wrote this script without knowing Cleese would play the lead, as it seems exactly like the sort of farce Cleese had become associated with thanks to Fawlty Towers. Stimpson himself isn’t too dissimilar to Basily Fawlty in manner and temperament, especially when irked, so it’s unclear if Frayn coincidentally wrote a “Basil Fawlty type” or if Cleese’s narrow range just meant there was no way Stimpson couldn’t evoke his famous hotelier.

Both are men in authority, somewhat uncomfortable about their middle-class status. And let’s face it, the little moustache that twitches when things go wrong doesn’t help matters. But since we never got a Fawlty Towers movie, there’s a touch of added enjoyment with Clockwise by half-closing your eyes and imagining this is a big-screen adventure for Basil. Swap “hotelier” for “headmaster” and it’s close enough. 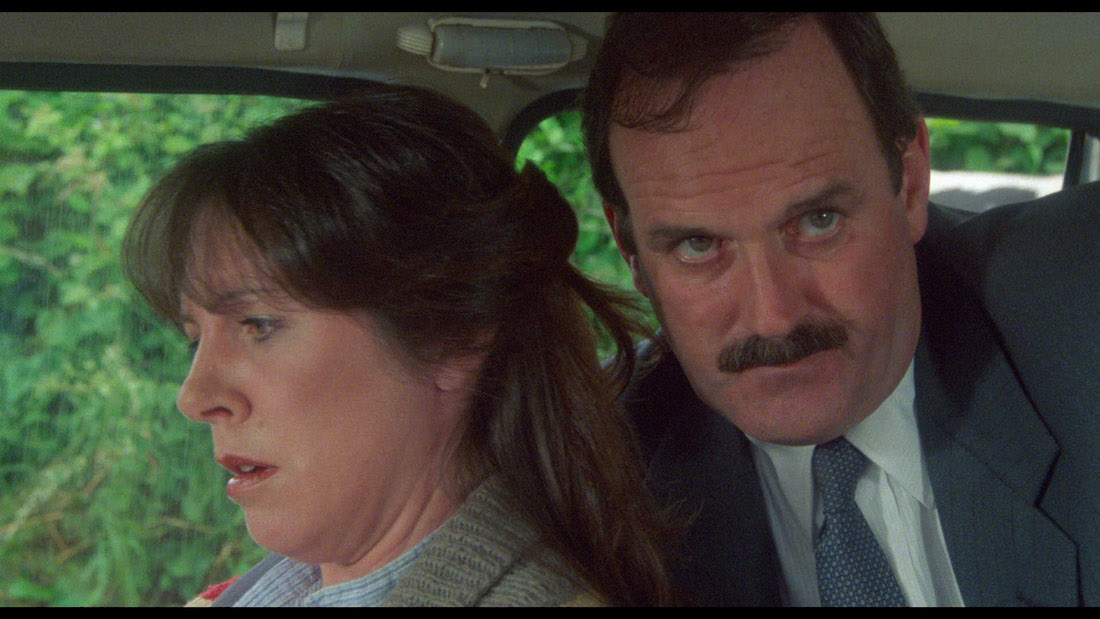 That said, Clockwise is nowhere near as funny or well-written as Fawlty Towers. I’m surprised Cleese didn’t ask to rewrite the script with Frayn, as he appears to have found it hilarious on first reading and demanded no major changes. That’s a pity because it’s not hilarious and would be a laugh-free zone without Cleese around to elevate the iffy material. He’s a naturally funny performer and, while not quite at his physical peak in the mid-1980s (then aged 47, he was suffering from a thigh injury throughout the shoot), the only reason Clockwise hasn’t been long-forgotten is because it has Cleese delivering his patented lanky runs, broiling anger behind a stiff upper lip, and comical outbursts of violence (smashing up a phone, kicking a stuck car). Nobody else could make this script work half as well.

The story is mildly entertaining for, charitably, about half its runtime. The introduction to Stimpson is well handled, particularly in how the script avoids making him a monster everyone hates (even the kids find Stimpson amusing going by the number of times they laugh at his jokes during assembly.) The incident when Stimpson gets on the wrong train and loses his speech is farcical fun, and I enjoyed the added complication when his wife spots him with Laura and mistakenly thinks he’s having a shameful affair with a girl less than half his age. And for a while, it’s entertaining to see how Stimpson’s day gets progressively worse, in ways that could actually happen in reality—from accidentally not paying for petrol and accidentally damaging a police car, to getting stuck in a muddy field and being mistaken for a vandal and a kidnapper. 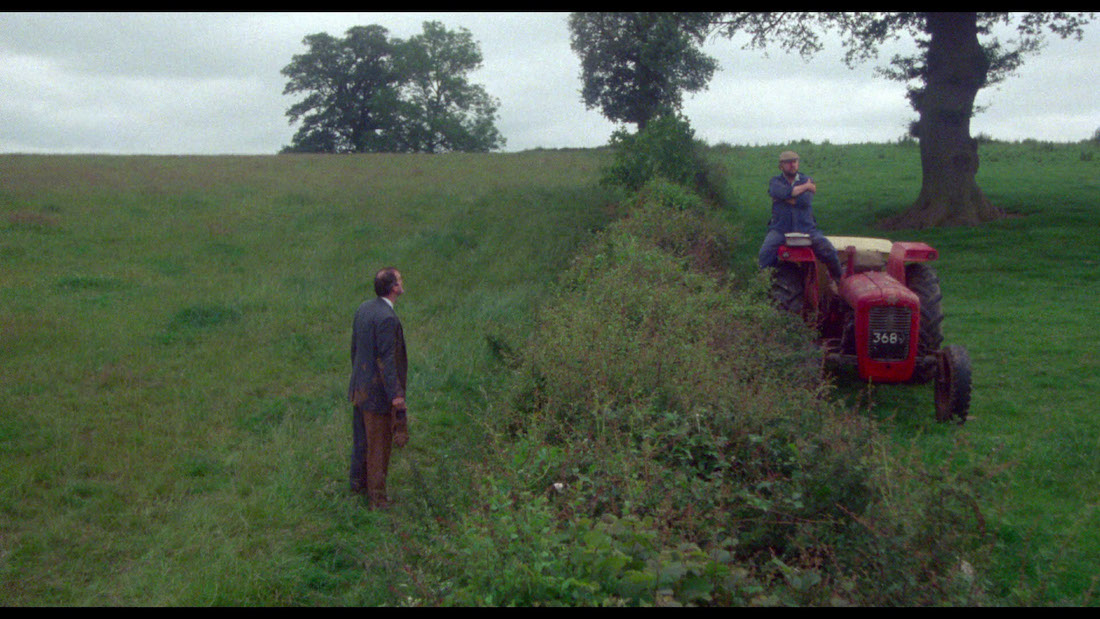 However, things get rocky once Stimpson finds himself in a monastery while looking for a tractor and the movie never fully recovers. Clockwise was written by a playwright who ordinarily has to write with restrictions that come with stage work, so one can almost sense Frayn struggling with the scope available to him in a movie. He offers something small-scale and not particularly ambitious.

Everything builds towards frazzled Stimpson eventually giving an improvised speech to a room of his peers (no headmistresses or any men under-50, conspicuously!), which is interrupted by folk who’ve tagged along with him to Norwich. It’s here that Stimpson undergoes a Basily-esque meltdown, but it rings hollow because what he went through wasn’t extreme enough to justify him losing his marbles. He doesn’t do anything that couldn’t be explained away in minutes, so it doesn’t feel like his life and career are under any serious threat. 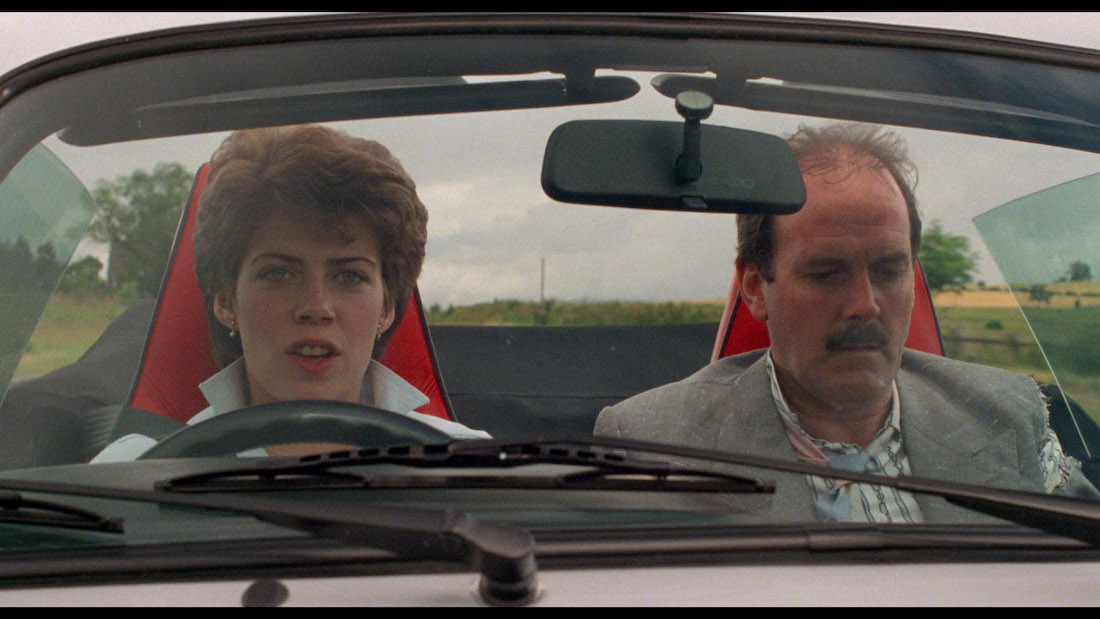 Clockwise really needed to drag Stimpson through a nightmarish hell, but it never goes far enough. The travails and misunderstandings are too quaint to modern eyes. It’s easy to imagine a remake that involves more serious crimes and ends on a bleaker note, but Clockwise isn’t aiming to be a jet black comedy—although it touches on that with a sequence where a car salesman’s fooled into thinking he’s going to have sex with an underage girl while “a monk” watches them. But in the hands of Frayn and with Morahan’s pedestrian TV-style direction, Clockwise never rises above being a mediocre farce.

When released in 1986, Clockwise wasn’t a box office success although it’s more fondly remembered in the UK. It was a particular disappointment in the US, where it was only screened in 15 arthouses, grossing a paltry $1.4M against a $4M budget. But it did inspire John Cleese to write his own comedy vehicle, this one intended to attract the lucrative American audience Clockwise didn’t: A Fish Called Wanda (1988). That movie became a classic ’80s comedy, whereas Clockwise is merely a time-filler for Cleese completists. 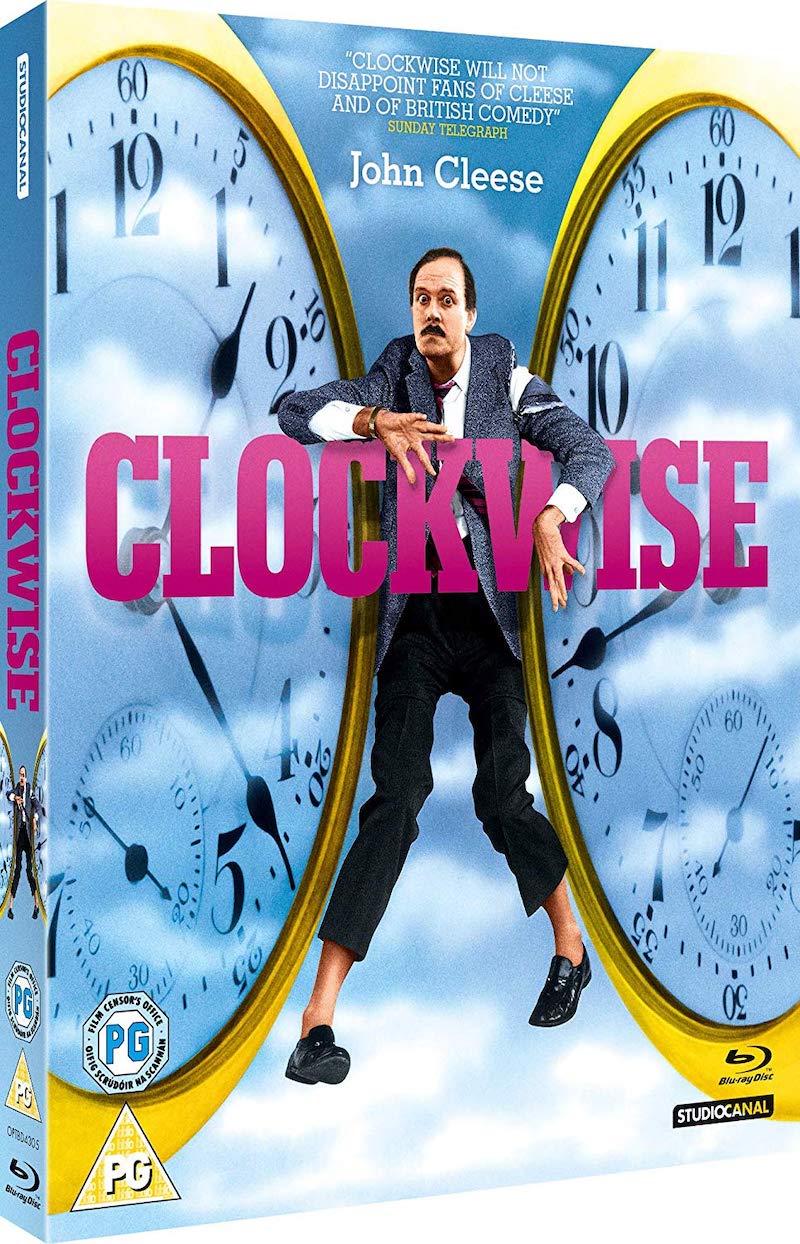 Once again, StudioCanal has worked their restoration magic by going back to Clockwise’s original 35mm colour negative and rescanning it for 4K. There’s no resulting 4K Ultra HD release, alas, but the 1080p Blu-ray version is more than good enough. It delivers a clean and crisp picture with natural colours and patina of film grain that looks appealing in a 1.85:1 aspect ratio. I remember seeing this on pan-and-scan VHS in the late-1980s and on television before widescreen caught on domestically, so it was a revelation in this HD form.

Sadly, the image quality isn’t matched by the sound. This new release only comes with an LPCM stereo soundtrack, which is adequate for an older movie that doesn’t have many opportunities to impress aurally, but it’s nonetheless disappointing. At least the dialogue is well resolved and you don’t have to suffer George Fenton’s garbage music score from behind you. 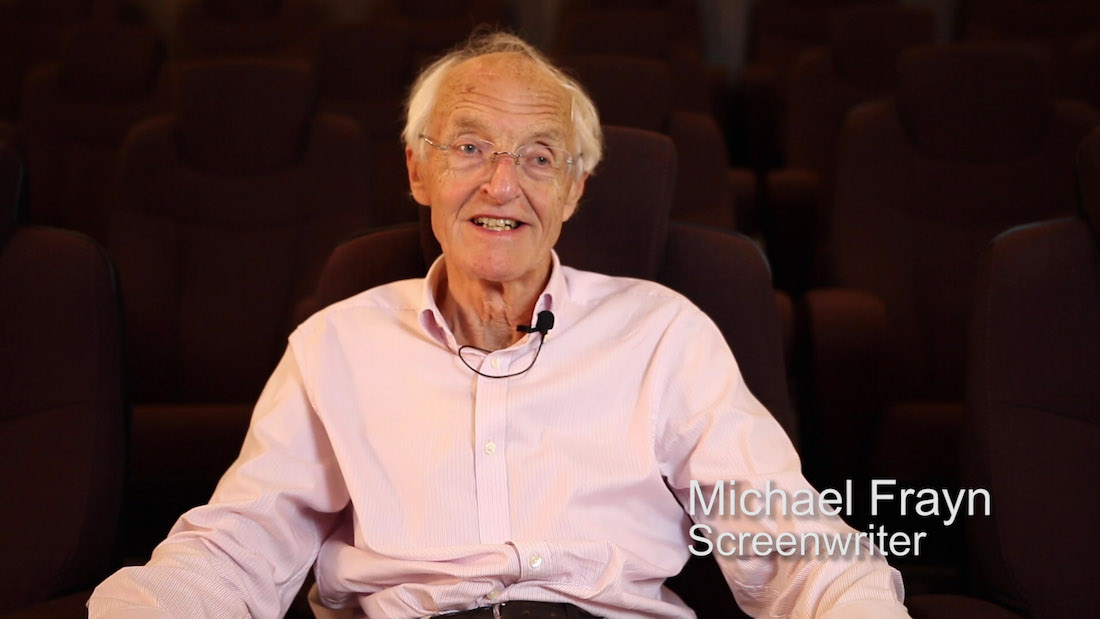 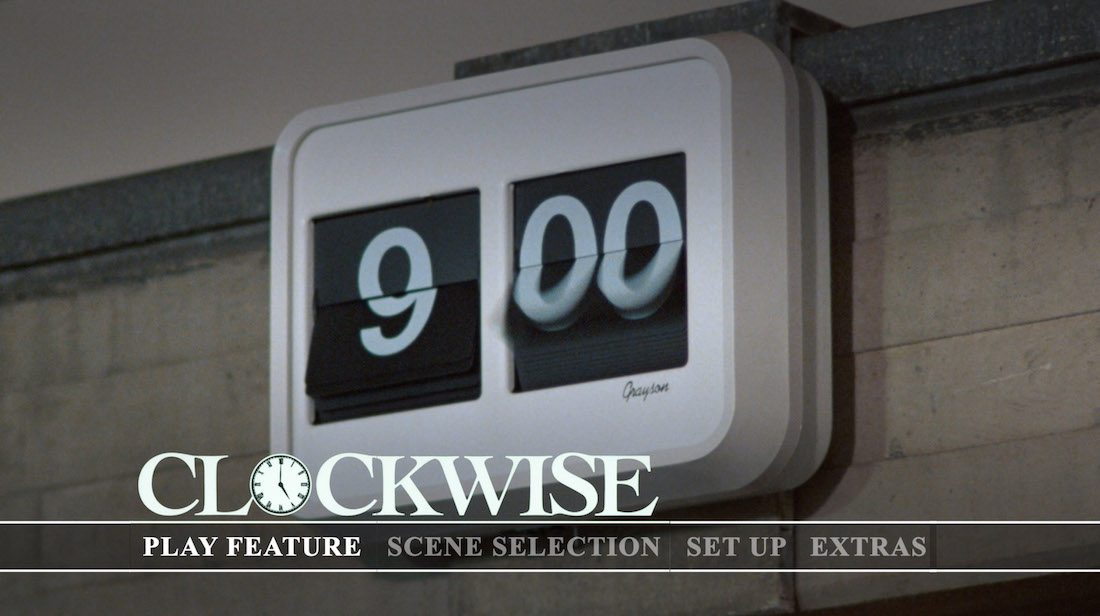