When you look at Netflix these days, it’s sobering to realise that, just five years ago, the notion of an original series on a video-on-demand platform was met with skepticism. But when the US adaptation of House of Cards debuted in 2013 it surprised audiences and critics alike, and Netflix instantly became a serious provider of high-end entertainment. While their commissions have varied in quality over the years, this hasn’t stopped Netflix from developing over 50 scripted programmes, always looking for the next breakout hit. There’s no doubt their shows create a hype most network shows can only dream of, with dramas like Orange is the New Black, Stranger Things, and 13 Reasons Why getting people around the world talking. And despite all the new kids on the block, trailblazer House Of Cards has managed to not only survive but thrive during its fifth season.

If you’ve never seen House of Cards before, it’s a loose adaptation of a classic 1990 BBC miniseries, altered for US politics. Netflix outbid all other competitors for the production, picking it up for two seasons and changing the landscape of television by releasing a full season’s worth of episodes at once. The online binge-watch was born, and we haven’t looked back since. With a strong cast, led by Academy Award winner Kevin Spacey, and David Fincher (The Social Network) on board as executive producer and director, House of Cards had a lot to offer on paper, and has been delivering ever since. 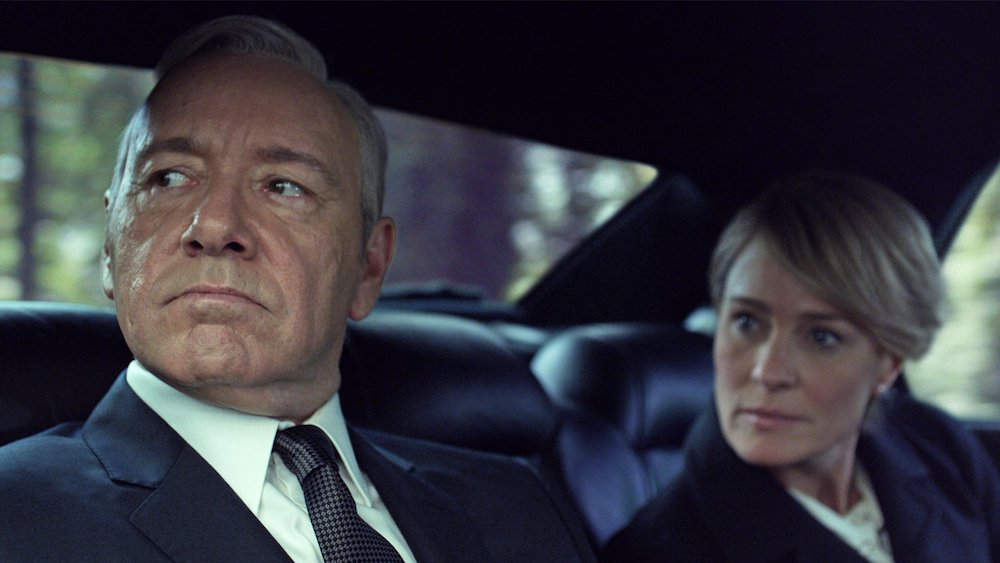 As a quick recap, we’ve followed Senator Frank Underwood (Spacey) and his wife Claire (Robin Wright) through their political careers, scheming and clawing their way up the ladder all the way to the Oval Office. The Underwoods aren’t the most amiable of human beings, with murky moral compasses and a willingness to screw people over in order to achieve their selfish aims. What’s made House of Cards truly fascinating over the years was seeing the contrast between reality and fiction, with a popular President like Barack Obama in office when the show began, who’s far removed from Frank’s cutthroat ways.

But now, with season 5, we’ve entered new territory in the real world. Donald Trump assumed power in the White House this year, and suddenly the Underwoods seem quite pleasant in comparison. It’s hard to believe you could admire a married couple willing to lie, murder, and cheat on each other, but at least you know they’re fictional. And with Frank always breaking the fourth wall to talk to the audience at home, directly, we feel like we have a special connection with him. 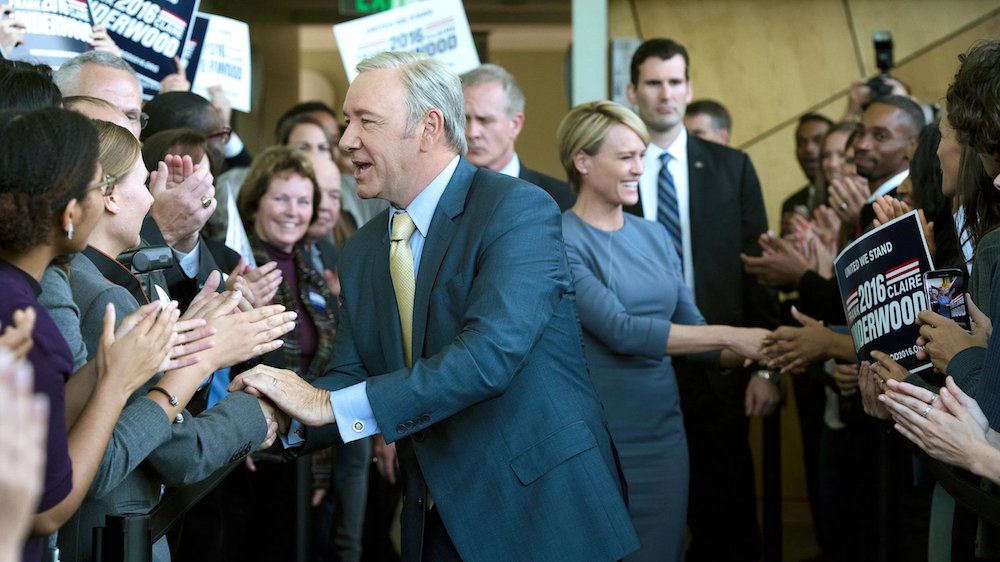 As we begin season 5, the fallout from season 4 is being dealt with, as Frank and Claire had to take strong decisions in order to combat the Islamic Caliphate Organisation (ICO). Frank declared war, encouraged by his other half, and it started to feel as if he was truly off-the-rails and the maniacal side of the Underwoods was ready to take its rightful place at the forefront of US politics.

In the midst of the 2016 election where the Underwoods are running mates, they find themselves using the war with ICO as a way to manipulate the electorate and their ability to vote. Frank knows he’s not the most popular man out there, instead falling behind to the opposition’s war hero Will Conway (Joel Kinnaman), but affability has never been at the forefront of Frank’s plans, instead relying on his much more popular other half. After all these years the Underwoods know exactly how to play the system, and the most addictive quality of the show is watching how their plans unfold, especially when others are plotting to take them down. Even in their darkest and most troubled times they find ways to get out of impossible situations and will plot the downfall of Conway by any means necessary.

After their marriage experienced a rocky period, Frank and Claire have now settled into their groove. Claire’s still in her unusual relationship with writer Thomas Yates (Paul Sparks), while Frank is mostly focused on political gain, although he seems to dabble here and there with the occasional same-sex encounter. But through all their sexual complications, the Underwoods do appear to love and respect each other and know the key to their mutual success is staying together. The ever-present Yates becomes more of a problem than a solution this year, as he’s unable to stay loyal to Claire, and his wandering eyes irk Frank in the worst way possible. It’s such a bizarre and complex situation between the three, yet somehow it makes for compelling viewing, especially when you know it can’t end well. 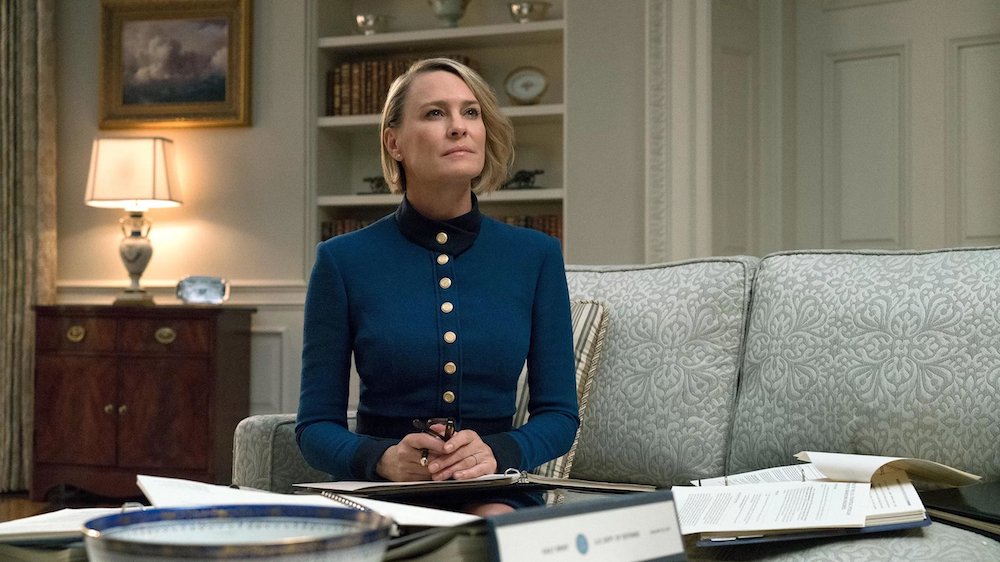 Spacey and Wright are utterly mesmerising in every scene they’re in, and deserve every plaudit they get, but House Of Cards also has a consistently strong supporting cast. Somehow Doug Stamper (Michael Kelly) has survived this far, and his unwavering loyalty to Frank always drives him to the darkest of depths. His history with Rachel Posner rears its ugly head, and becomes a potential chink in his Presidential campaign, and it finally feels like retribution and justice will be served. Frank knows Doug’s a troubled man, and while he appreciates Stamper’s dedication to the cause, he’s also willing to take advantage of it to save his own skin. I’ve been a fan of Doug since the start, considering him one of the highlights of the show, and you almost feel sorry for him here despite his previous questionable behaviour.

Patricia Clarkson, Jayne Atkinson, and Neve Campbell all bring top class performances as influential women in the White House. As Jane Davis, Clarkson is a revelation, showing a mysterious and scheming side that often gives the Underwoods a run for their money. We’re not quite sure where her loyalties lie, or just how much influence she has, but Davis is definitely one to keep an eye on. Atkinson, as Secretary of State Catherine Durant, may have a little less to do this time round but she’s a strong independent character always looking to make big moves where possible. And if you know Neve Campbell from Scream then you won’t be surprised at the grit and determination she displays as campaign manager LeAnn Harvey. She does the best she can in one of the most difficult jobs around and gets sucked into a highly messy situation with Aidan Macallan, attempting to cover up incriminating evidence and secrets that the Underwoods cannot afford to let slip. 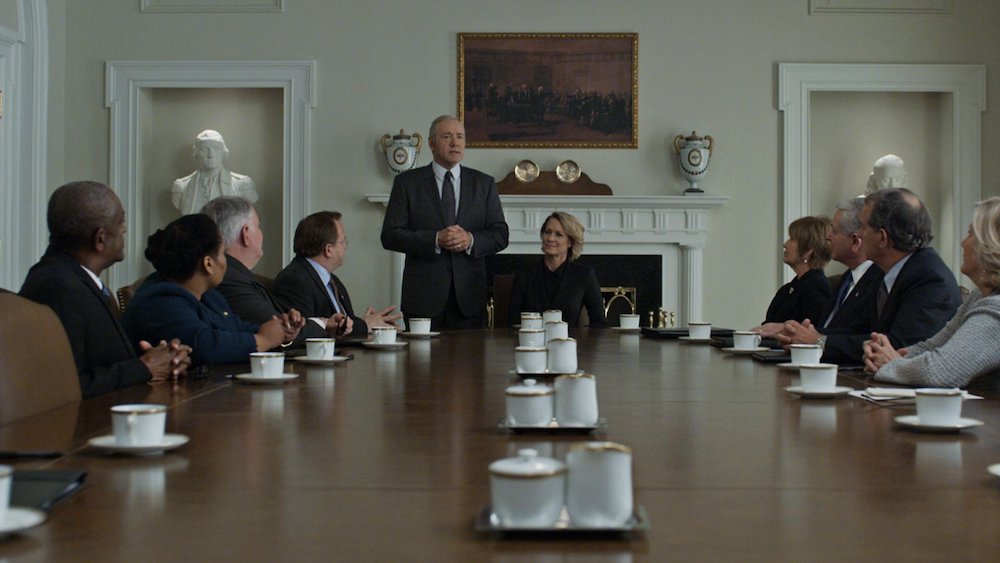 With all the traditional political manoeuvring and backstabbing one would expect, season 4 feels like House of Cards back to its best. I struggled a little with season 4, which felt like a transitional phase to move the Underwoods through an essential rough patch, but here they’re at their strongest and ready to take on all comers. The show is back to being an addictive binge-watch. If I could sum up this season in one phrase, it would be ‘the rise of Claire Underwood’, which many fans have called for in the last few years. Here she becomes as ruthless as her husband, something I question as a viewer (having always felt she was a little more human than Frank), but I’m interested to see how this plays out. The new writers certainly cross a line with Claire and there’s no going back…

Wright delivers what could be considered a career best performance, and while we’ve lost a number of high profile names over the years (Kate Mara, Corey Stoll, Mahershala Ali), others like Kelly and the newer cast have stepped up. This is a show willing to adapt and change for the greater good, keeping its core ideas but flipping them on their head to deliver unexpected results. By the end of this season it feels like one chapter ends and a whole new one begins, and I’m not quite ready to say goodbye to the Underwoods. There’s gas left in the political tank yet.