Last week’s spectacular battle against the Night King and his White Walkers got a mixed reception from audiences, as there were storytelling decisions that didn’t seem like the most entertaining option. Or outright ignored what Game of Thrones itself has been foreshadowing for a long time, making a few surprises feel unexpected but also unearned. It’s never helped that the Night King’s personality is so inscrutable and never speaks, which denies viewers the sort of confrontation “The Last of the Starks” sets up between the warring Westerosi women: Cersei Lannister (Lena Headey) and Daenerys Targaryen (Emilia Clarke). 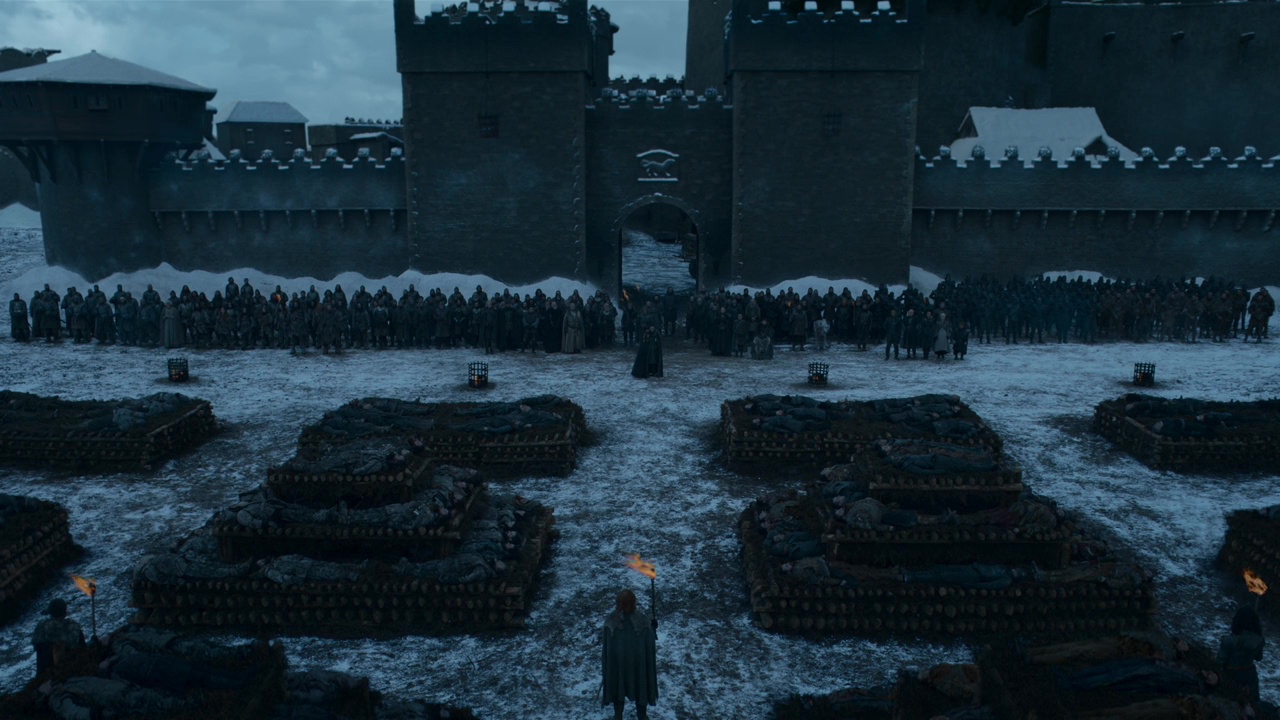 “A Knight of the Seven Kingdoms” was an excellent episode that set the mood for “The Long Night“, and in many ways “The Last of the Starks” was a bookend tackling the aftermath of the great battle for Winterfell. The dead were honoured and cremated in a mass funeral pyre (how long did those take to build from nearby trees?), and the unlikely victory over the forces of darkness was celebrated with drinking and a feast. There were also some nice developments here, with Gendry (Joe Dempsie) being legitimised by Dany as a true Baratheon and the new Lord of Storm’s End, which also secured his allegiance in the future. Gendry almost immediately proposed to Arya (Maisie Williams), but his dream of them ruling together was dealt a blow when it became clear the “hero of Winterfell” has no desire to become a Lady and has unfinished business in the south…

One of the most enjoyable moments was Jaime (Nikolaj Coster-Waldau) feeling embarrassed for Brienne (Gwendoline Christie) during a drinking game involving Tyrion (Peter Dinklage) and Podrick (Daniel Portman), which revealed she’s still a virgin, so he finally acted on their obvious feelings for each other by bedding her. It was a great resolution to their pseudo-romantic storyline, while also putting the situation with the infatuated Tormund (Kristofer Hivju) to rest, but it was also an unexpected way for Jaime to realise his true nature. He can’t stay up north, away from the battle, sleeping with Brienne, knowing his twin sister and lover’s likely to be executed by Dany’s armies if she loses… 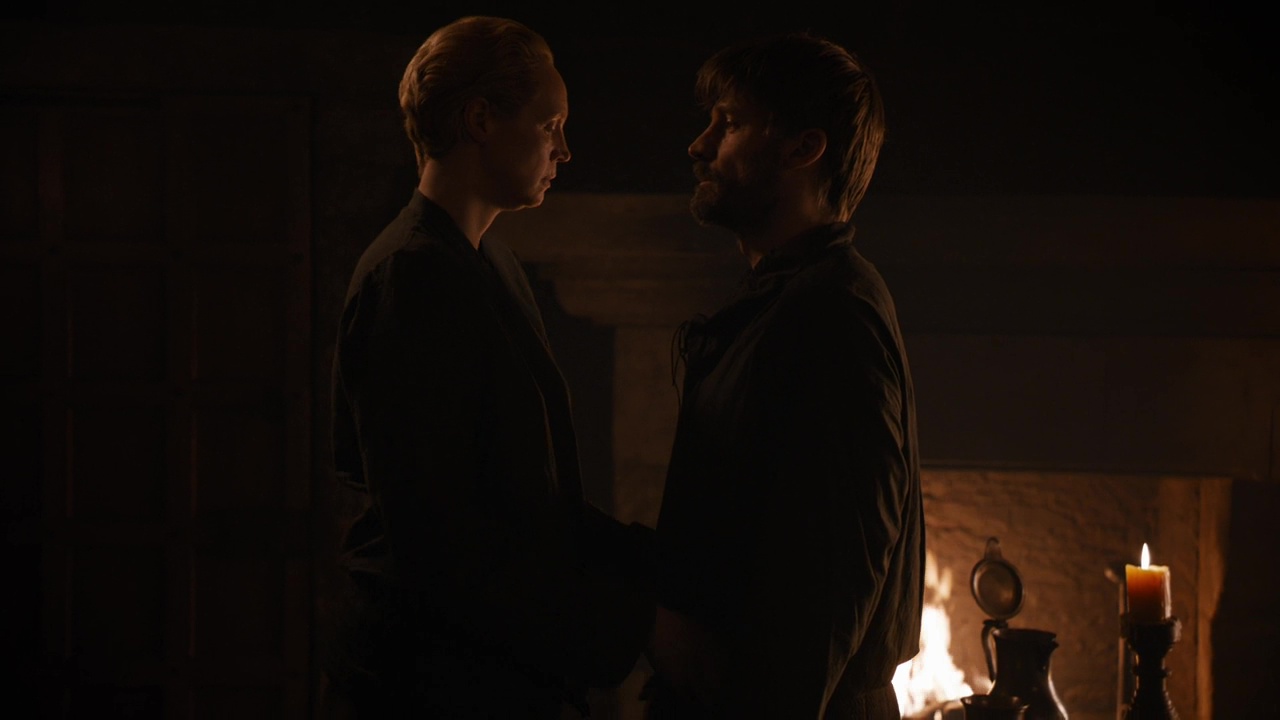 Jaime was introduced as a villain in season 1, but meeting Brienne transformed him into a better man with humility, only now it seems his twisted love for his devious sibling is too strong to deny. Seeing him ride away to help Cersei, remembering there’s too much hatred in everything he’s done to ever be the noble knight someone like Brienne deserves, was supposed to be heartbreaking… but it somehow wasn’t. I think this subplot was badly rushed; a consequence of the lack of episodes available to let events breathe properly. We really needed a few more episodes seeing Brienne and Jaime as a couple before Jaime starts feeling haunted by his awful past and reverts to form. If we next see Jaime fighting against Dany’s forces in King’s Landing, siding with his sister against the brave men he fought alongside at Winterfell, I’m not sure it’s going to feel right. However, if he’s destined to kill Euron Greyjoy (Pilou Asbæk) because he’s the true father of Cersei’s unborn child, I can perhaps live with it.

The continuing uncertainties over Daenerys also resumed, with Sansa (Sophie Turner) still struggling to accept the ‘Dragon Queen’ as the rightful monarch of the Seven Kingdoms. Arya doesn’t trust Dany either. But it was Jon (Kit Harington) who had the most difficult time after Dany gave him an ultimatum: keep your heritage as the male heir to the Iron Throne a secret, or there’s no future for them as a couple despite their blood relationship. Dany had earlier noticed the adulation and respect Jon commands from everyone around him, being a more natural ruler who can inspire friends and even enemies to join him in righteous battles, and she clearly suspects he’ll be tempted to usurp her for the Iron Throne. Also, without the adoration of the Dothraki and the death of Jorah, there actually aren’t many people at Winterfell to beat the drum for why the Iron Throne needs another Targaryen. 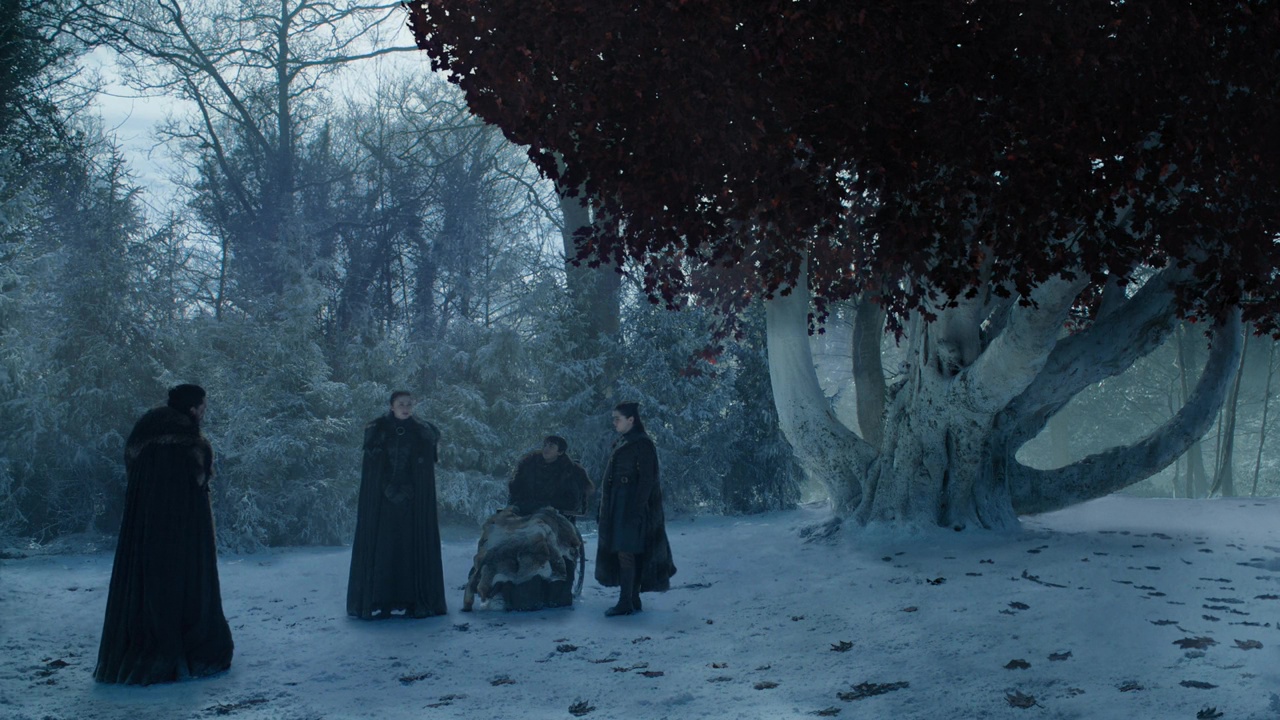 Later, Jon can’t help but reveal to his two sisters that his father was a Targaryen and swears them to secrecy, but it’s not long before Sansa breaks the trust when speaking to Tyrion… who, in turn, lets Varys (Conleth Hill) in on the biggest secret in the land. A hot debate over which person would make the better ruler of Westeros ensued. Tyrion and Varys know that Jon would be a better king, even if the former won’t say it aloud, as Jon’s dual parentage would hold both the people of the north and south together. Dany can’t shake the stench of being an “outsider” to the Northmen despite her invaluable efforts defeating the Night King. It seems Tyrion has followed Dany for so long he’s become unshakeably loyal and remains impressed by the omens of her greatness (like “birthing” three dragons after withstanding the fires of a blazing hut), and can’t find a way to resolve this matter without tearing his beloved queen’s relationship with Jon asunder.

There were also more nods to the possibility Dany’s just another ruthless Targaryen deep down—a ‘Mad Queen’ in waiting—despite her claims to be against the kind of tyrants that fill her family tree. I love the idea we may have been following the journey of a bad ruler, who started with noble intentions but comes to understand you can’t wield monarchal power without instilling fear in everyone she rules. The show hasn’t done a great job with this duality, however, mainly because Dany’s a popular character and has a lot of the audience sympathy. The groundwork to make us rethink her character’s calibre just isn’t there, partly because she also has to be the clear heroine in contrast to villainous Cersei.

I know the core of Game of Thrones is that it’s not a black-and-white, good-vs-evil story like The Lord of the Rings, for the most part, but to make audiences doubt Dany at this late stage is a tall order. And is it even worthwhile, seeing as there’s little time to deal with how the rule of Queen Daenerys plays out if she takes the Iron Throne? 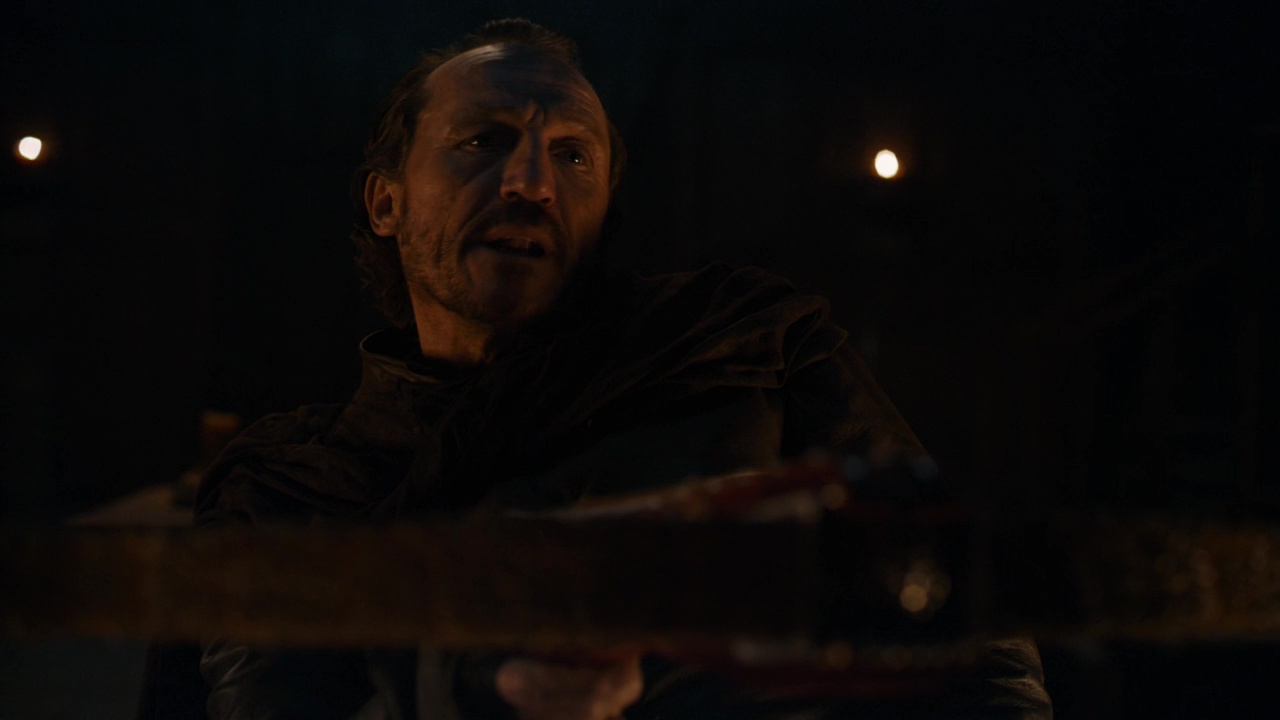 I also wasn’t expecting the sudden appearance of sellsword Bronn (Jerome Flynn) armed with his crossbow, under orders from Cersei to murders her turncoat brothers. Tyrion manages to bargain away their lives, by giving his word Bronn will be rewarded with Highgarden if he spares them and lets Dany defeat Cersei. This is enough for Bronn, who leaves them be, although I’m not convinced Bronn’s been particularly wise here. He was always a greedy character driven by money and sex, but I don’t quite believe he’d trust Cersei and that it would be worth his time killing either Lannister. Or why he now thinks his behaviour will allow Tyrion to just hand over Highgarden when the dust’s settled, despite giving his word. I know Tyrion’s word is his bond, but I just can’t see Jaime letting Bronn get away with this stunt. 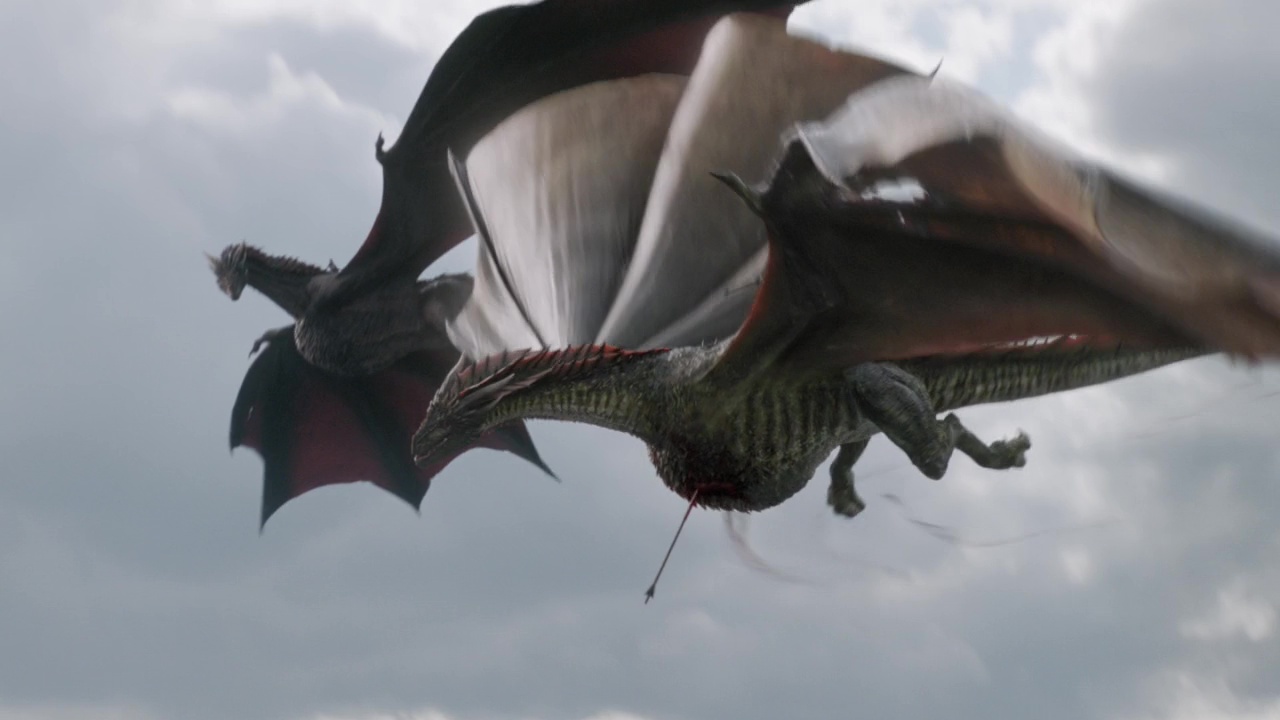 One of the biggest surprises came during the sequence where Dany and her fleet approach Dragonstone by sea, coming under ambush by Euron and his ships, armed with dragon-slaying Scorpion artillery. Rhaegal is slain with three well-aimed shots, and Dany almost succumbs to her emotions and risked losing Drogon by putting her steed into a near-suicidal dive against the enemy ships with more deadly bolts flashing past her. Missandei (Nathalie Emmanuel) is also captured during the brief skirmish before Dany’s army reaches Dragonstone and lick their wounds. Remember when the presence of dragons felt like an unconquerable threat that Cersei couldn’t possibly win against? Now they seem to get picked off relatively easily by ground-to-air weapons… 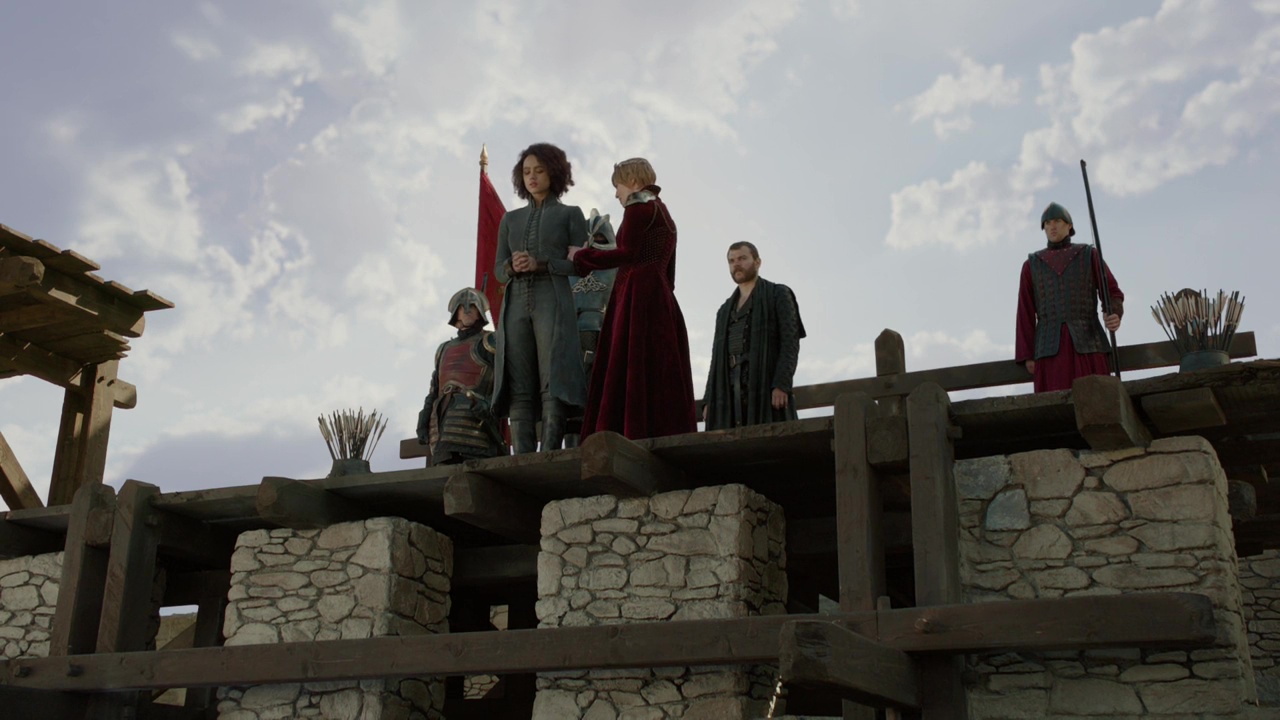 One thing “The Long Night” missed was having an enemy one could communicate with and understanding the motivations of because the Night King was a supernatural foe who represented death and forgetting. Here, it’s certainly more enjoyable to have Cersei back to sneer down her nose and manipulate people. She’s busily filling the Red Keep with innocent people, to try and prevent Dany from raizing the capital to the ground with her remaining dragon and killing those she wants to benevolently rule.

But the real delight was seeing the state of play just outside King’s Landing, with Dany arriving with a depleted army of Unsullied and a vulnerable dragon forced to stay in the background because the battlements are now equipped with deadly Scorpions. Qyburn (Anton Lesser) goes to meet with Tyrion as representatives of their respective queens, but their discussion doesn’t offer a breakthrough to prevent violence and dying children, prompting Tyrion to appeal directly with his sister from the ground—knowing there are hundreds of arrows pointed at him, meaning Cersei could easily eliminate the meddlesome little brother who killed her father. Tyrion’s always been a man of wisdom and words, but despite getting a flicker of emotion out of Cersei by appealing to her maternal instincts to keep her unborn baby safe from harm, it’s ultimately not enough. Missandei is duly beheaded by the Mountain (Hafþór Júlíus Björnsson), her final word of defiance being “dracarys”, as Grey Worm (Jacob Anderson) and Dany watched in anguish. Hers is the first major death of this long-awaited fight for the Iron Throne. 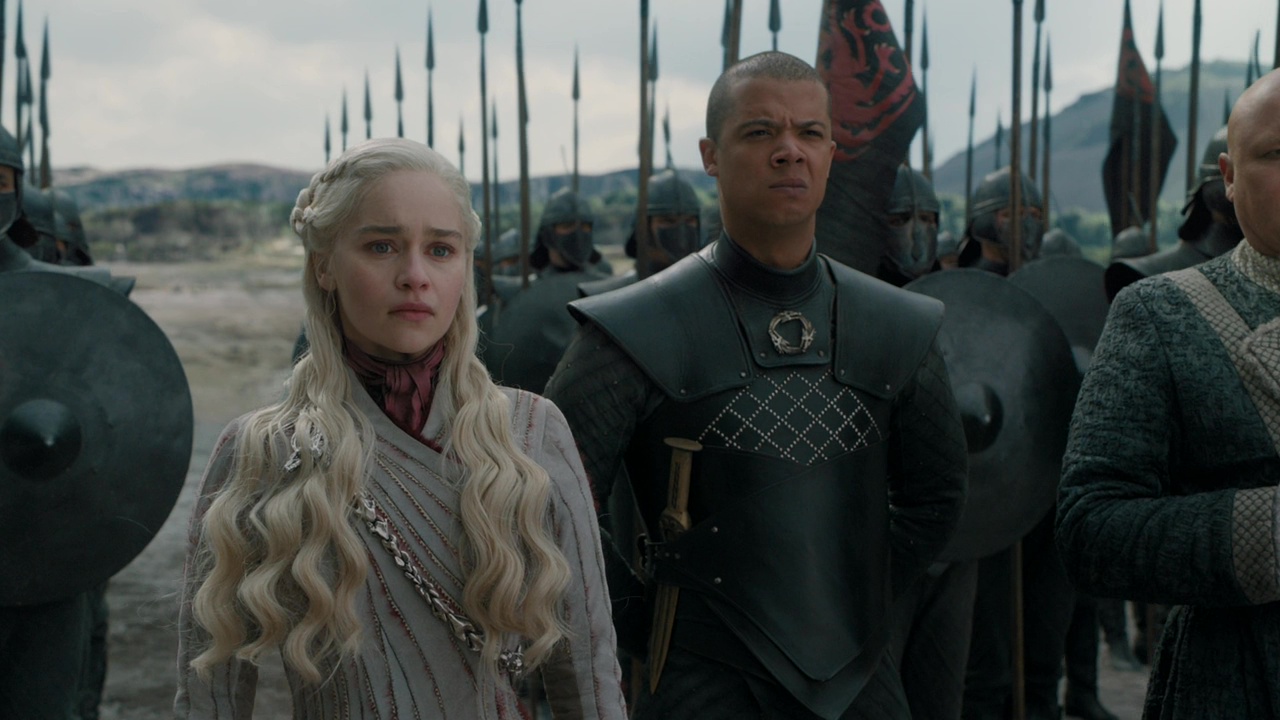 “The Last of the Starks” was a little messy in places and showed signs of how Game of Thrones could benefit from a few more seasons, as author George R.R Martin is on record as wanting. One day we’ll get to read his remaining novels and I suspect this series will seem oddly truncated from season 5 onwards, which is a shame, but it’s the nature of the beast because of how TV works and how HBO started production before all the books were published.

However, putting aside some of the rushed feelings with a few storylines, this episode worked rather well. I liked seeing the aftermath of the battle and how many secrets are being revealed to more people, putting a strain on many of the relationships. It’s certainly getting exciting and I understand why the show’s finale is focused on this story’s living people, rather than the ice zombies. But there are also moments when the writing isn’t being supported by what needed to be foreshadowed better, particularly with the awkward way Dany’s arrived in Winterfell with the blessing of Jon, proved herself in battle fighting alongside the Northmen, and is still being treated like shit. It’s making me dislike Sansa and Arya at the moment, who just come across as ungrateful women who simply don’t like their brother’s new girlfriend, which isn’t a good feeling.