An unusual set of circumstances brings unexpected success to a pop star.

Brady Corbet’s second film is a portrayal of terrorism, addiction, and the perils of stardom. And it’s overflowing with talent: Willem Dafoe narrated, Sia wrote the pop song, Scott Walker (The Childhood of a Leader) composed the score before his recent death, Lol Crawley (Four Lions) is the director of photography, and Natalie Portman acts for the back row.

The story is divided into three parts. In the first, “Prelude 1999”, Dafoe’s narrator introduces us to Celeste (Raffey Cassidy), a middle school student from Staten Island who’s gravely wounded in a school shooting. That sequence opens Vox Lux and it’s stark, shocking, yet tastefully done because it avoids being exploitative or too graphic. Dafoe’s narration is absent from the opening, as it’s supposed to give the film a feeling of an old fable being but, in practice, sounds too reminiscent of Ron Howard’s Arrested Development voiceover.

In the second act, “Act I: Genesis 2000-2001”, Celeste and her older sister, Ellie (Stacy Martin), co-write a song which Celeste performs at the church service to honour her murdered schoolmates and teachers. This appearance catapults her into the spotlight, which seems a little unrealistic in the days before social media and online viral sensations. Suddenly, Celeste’s nascent talent has been commodified by a sleazy manager (a miscast Jude Law with a wonky US accent) and sold to the highest bigger. She’s sent to Los Angeles to make music videos before being whisked to Stockholm to record her debut album. 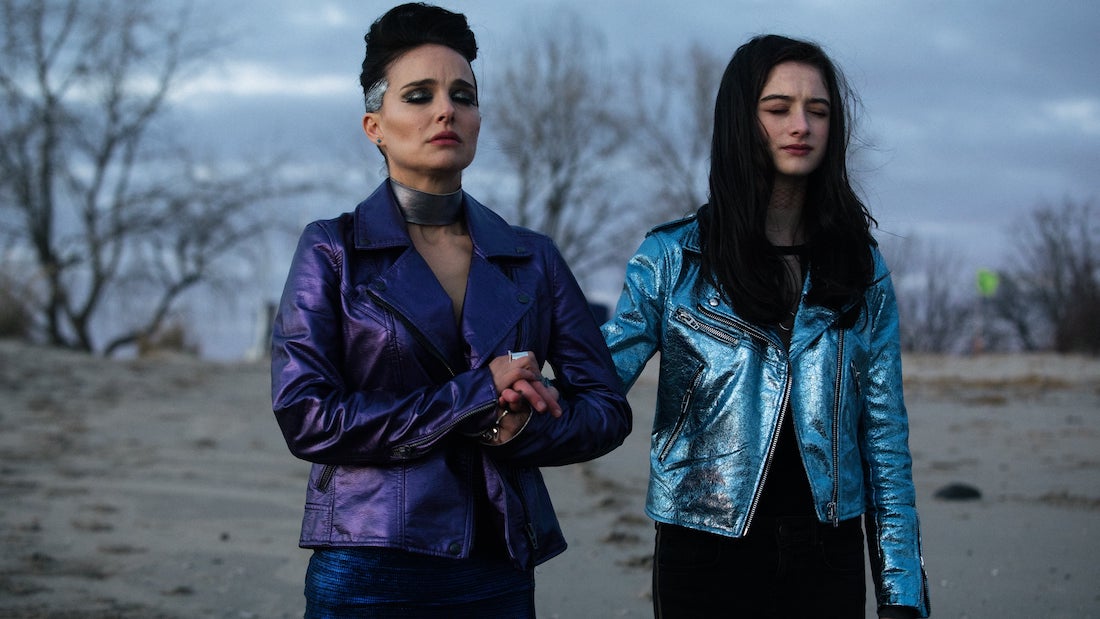 The narration makes sure Celeste is kept at a safe distance, as this film isn’t interested in the viewer’s sympathy. Cassidy’s performance is subtle yet captivating, enhanced by the actress’s thin physique. The darkly lit glamour of making glitter-soaked music videos in tunnels and partying with rock stars are some of Vox Lux’s highlights. But considering this is an early-2000s era of pop, pre-Lady Gaga, Celeste’s style of music and image feel out of place. Successful pop acts around the turn of the millennium didn’t have such avant-garde aesthetics.

The second act, “Regenesis 2017”, starts with a terrorist attack on a holiday destination that’s reminiscent of the 2015 attacks on the Port El Kantaoui resort in Tunisia, although here the gunmen wear masks from Celeste’s music vids. The 2017 version of Celeste (now played by Natalie Portman) is far from the wide-eyed teen star we met earlier, however; she’s become addicted to drinking and drugs and is currently embroiled in a scandal after injuring a pedestrian in a road accident before making racist remarks about her victim.

Celeste’s ‘Regenesis’ relies on a big homecoming concert and reconciling with both her sister and her own adolescent daughter (cleverly now played by Raffey Cassidy). A large chunk of the second act is dedicated to this Staten Island concert and showcase the songs by real-life musician Sia, but the lacklustre performance undoes a lot of goodwill Vox Lux has built up.

And, like many modern pop stars, Celeste’s performance is so choreographed she has no personality and appears to be unmoved by the whole debacle. Unlike Rami Malik as Freddie Mercury during the recreation of Queen’s Live Aid performance in Bohemian Rhapsody (2018), you wish the film had dedicated more time to the narrative and less time to the performance. Even intercutting scenes of the gig with Celeste’s backstage meltdown would’ve made it more engaging. The songs aren’t very memorable and it’s hard to believe someone would become this famous with such a bland back-catalogue of hits. The performance just doesn’t feel authentic and, unlike cleverly casting Lady Gaga in A Star is Born (2018), here it feels like we’re seeing an actress try and be a pop star. 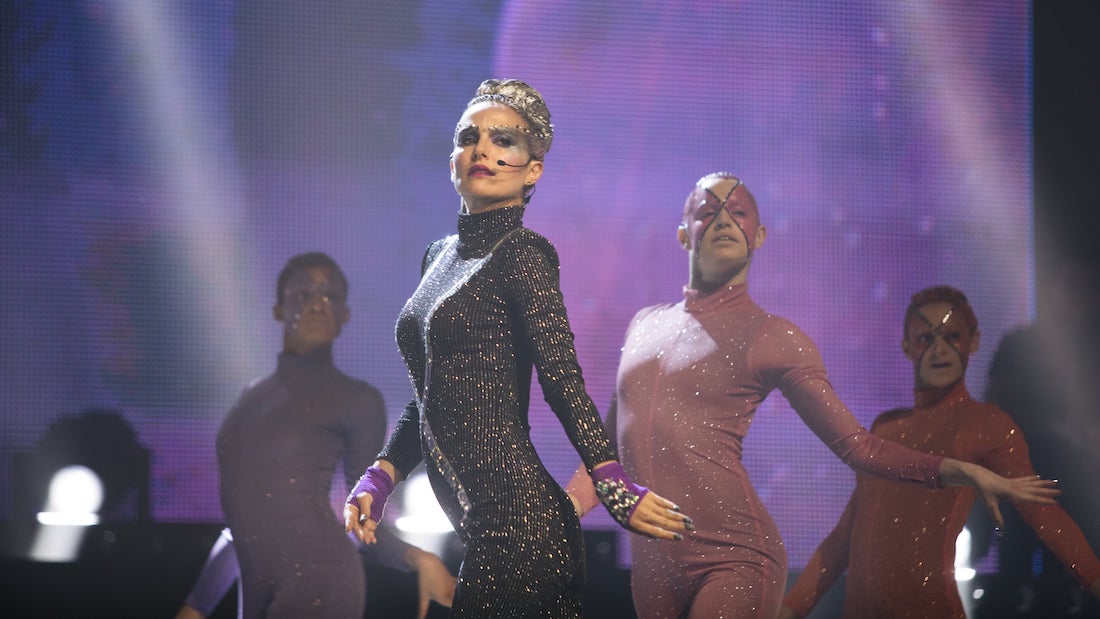 Natalie Portman delivers a take-no-prisoners performance as the adult Celeste, a swaggering diva who’ll burn down everything in her path, even her daughter. However, Portman has perhaps a little too much fun with her performance and overdoes it to the point of ridiculous. Her backstage meltdown (shot in the same room as similar scenes in Black Swan) is so OTT it becomes comical. Her Staten Island accent is also too much to bear, and Celeste’s crying and screaming evocate a toddler and not a pretentious diva. The line between artist and human entirely lost beneath the silver quiff and mask of black glitter.

Portman fails to portray the subtext of Brady Corbet’s own script and the character’s lack of growth forces Celeste’s rants to be a simplistic, recycled take on arrested development. At times it slips into parody but is never dark enough to be considered satire. Stacy Martin is given very little to do as Ellie, either, and it makes sense to learn Rooney Mara was originally set to play Celeste’s sister. In addition, superstar Celeste differs so much from her teenage self it’s hard to see the pair as being the same person. Portman’s adult version addresses those around her with such casual abuse it’s hard to feel sympathy towards her, so her self-destruction stirs little emotion.

Brady Corbet (The Childhood of a Leader) and cinematographer Crawley (45 Years) bring great energy to the first two acts, but the production of the performance is a dip in quality. Celeste is Madonna, Britney Spears and Lady Gaga rolled into one confused, lonely pop princess set on a path of destruction early in life. The two big scenes of violence are shocking and jolting whilst still looking like part of a music video. The beach terrorism incident in the last act is so beautifully shot the audience could almost believe they are watching one of Celeste’s music videos. 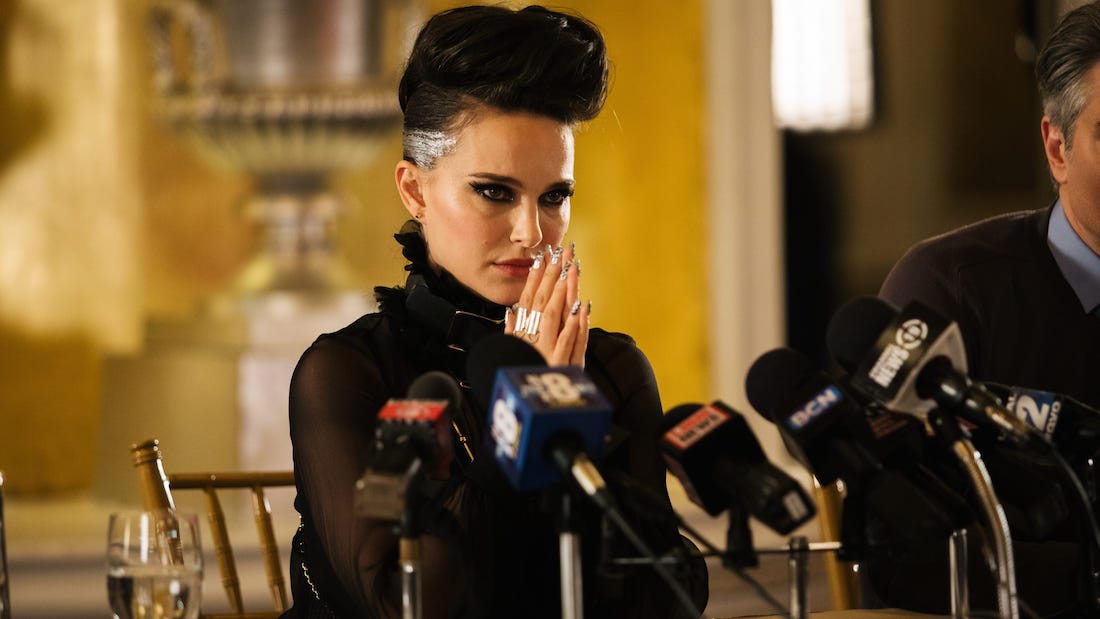 Although this is a film concerned with very modern concepts, there’s something surprisingly Biblical about Vox Lux. Celeste is something of a fallen angel; starting her story as a virginal school shooting survivor and evolving into a pill-popping, temperamental diva who spouts profanities and lashes out at the wrong people. The narrator even tells us the devil appeared to Celeste moments after the shooting and gave her the choice between death and global fame. The film is smart withholding details of her downfall, we don’t see the intervening years between the start of her career and the possible end of it. Audiences are so accustomed to seeing pop downfalls (Britney Spears, Lindsay Lohan, Michael Jackson), they won’t even stop to consider how such a nice young girl grew up to become such a poisonous woman.

The movie asks good questions but fails to answer them in an interesting way. What makes an ordinary person seek out superstardom and why is the public so obsessed with taking it away from them? The film deals with a lot of modern issues, like ‘what is it like for your life to become a brand?‘ and ‘what happens when the artist’s public identity fails to match up with their private life?‘ Corbet is more concerned with asking these question than resolving them.

Vox Lux’s finale lacks the dramatic impact of the opening scenes and ends on a strangely flat note. It’s not sure if it wants to be a modern Biblical tale, a satire on 21st-century’s obsession with disposable fame, or a grand fable about not losing yourself on the way to the top. Much like the state of celebrity, Vox Lux is hollow and draining.