This week on Game of Thrones, midseason arrived with “Blood of My Blood”, which saw the return of an old “favourite”, we put a face to a famous name, and met an entirely new family at Horn Hill in the dysfunctional Tarly’s…

After last week’s tragic loss of Hodor, holding the door and breaking hearts, there was some welcome aftermath with Meera (Ellie Kendrick) pulling the ‘still-warging’ Bran (Isaac Hempstead Wright) to safety, at great physical cost. Judging from our glimpse of the visions Bran’s still having, it seems he’s been given the mother of all Westeros history lessons—with shots of Jaime Lannister (Nicolaj Coster-Waldau) killing the ‘Mad King’ Aerys Targaryen, together with his own crippling fall at Winterfell, the infamous ‘Red Wedding’, and a shot of wildfire exploding beneath King’s Landing. It certainly seems like Bran’s going to become the ultimate authority on who did what, when, and who’s to blame for all the injustices in the world—so I imagine he’ll become a kind of ‘Merlin figure’ to whomever takes the Iron Throne and ushers in an age of chivalry.

But, more importantly for now, there was a surprise return for a character who’s been ‘benched’ for many seasons—Bran’s uncle Benjen (Joseph Mawle), who went missing beyond the wall. It turns out Benjen was stabbed by a White Walker, but avoided becoming one of their number by the Children of the Forest, and is now a most welcome ally. We certainly need more people who don’t think White Walkers are just northern superstitions, and Benjen seems to know Bran is now the next Three-Eyed Raven and must do everything in his power to control his warging and, essentially, get up the speed before the Night’s King leads his army southward.

A new location! And who knew Samwell Tarly (John Bradley-West) came from such a prestigious-looking place! It was certainly an imposing home for young Sam to return to, as the adopted father of a Wildling’s son, considering he was sent away by his stern father Randyll (James Faulkner) to kill Wildlings and “become a man”. Instead, Sam’s been allowed to leave Castle Black to train as a maester, which isn’t how Randyll saw things panning out for his firstborn.

Still, Sam’s mother Melessa (Samantha Spiro) and sister Talla (Rebecca Benson) were more reasonable people and took naive Gilly (Hannah Murray) to their hearts, but there was an intensely awkward scene over dinner where Gilly accidentally revealed her heritage while trying to defend Sam from his father’s incessant taunts.

Randyll reminded me of Tywin Lannister in many ways, being someone from an older generation who’s found himself with a son below his own narrow perception of masculinity. But rather then accept Sam for the qualities he does have, Randyll is exactly the kind of intolerant brute you can’t expect to get through to. It was no surprise that Sam was soon escorting Gilly out of Horn Hill, after taking his family’s ancestral Valyrian steel sword ‘Heartsbane’. How might that weapon come in handy? Is there a chance Sam will be the one to rediscover the secret of making Valyrian steel and ultimately arm the armies of Westeros against the invading White Walkers? 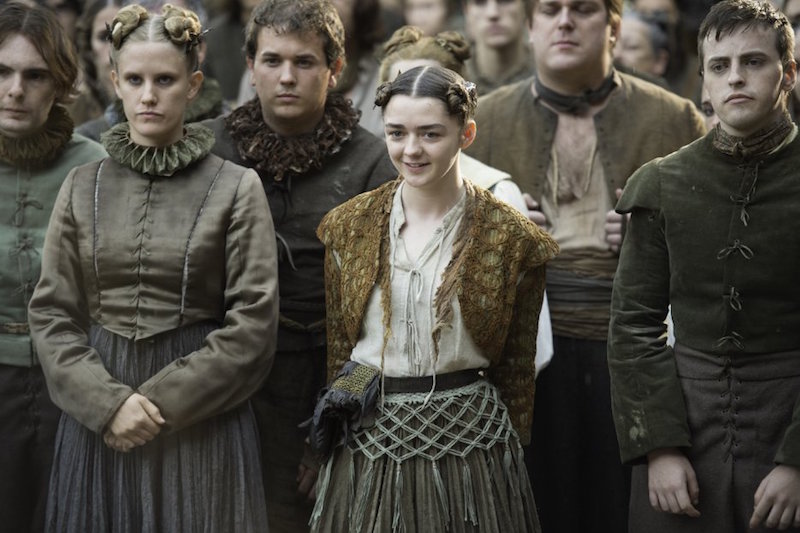 Are you serious? After enduring this storyline for so long, it just seems to be fizzling out! As predicted long ago, Arya (Maisie Williams) couldn’t bring herself to poison Lady Crane (Essie Davis), as ordered by Jaqen (Tom Wlaschiha) for the Many-Faced God, because Crane’s the only actress with any talent in her troupe, and a decent person. I do like the parallel between Arya’s training and ordinary ‘acting’, too, which is ultimately pretending to be other people and wearing different ‘masks’ of a less literal kind. But still, it seems that Arya has failed her training by refusing to murder a woman who doesn’t seem to deserve it, retrieved her sword Needle from the rocks were she hid it, and must now defeat the Waif (Faye Marsay) who’s been dispatched to kill her for failing her mission. Unless ‘failing’ was ‘succeeding’, perhaps? I don’t know. If we’re ultimately going to see Arya defeat the Waif and return to Westeros with a few extra sword-fighting skills as a result of her time in Braavos, this has been a ridiculous waste of time for a once-popular character. But if that happens, surely Arya’s condemning herself to a life of looking over her shoulder for anonymous assassins? 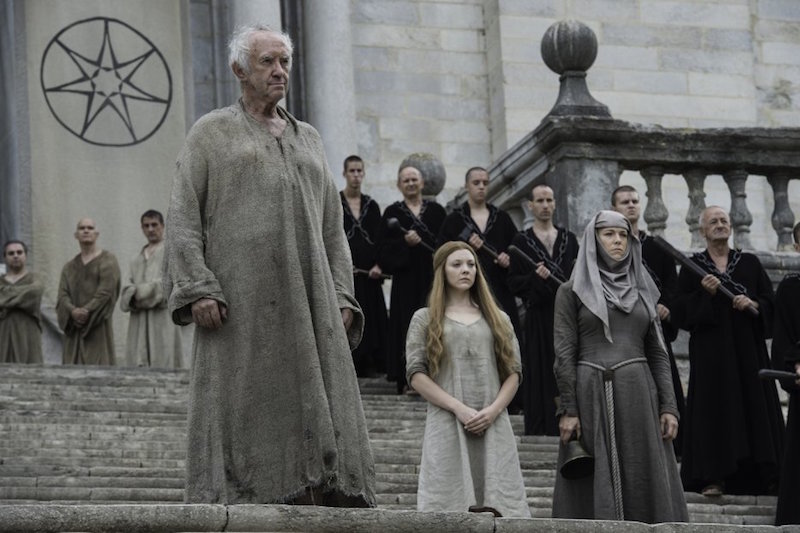 I also haven’t been enjoying the King’s Landing storyline for awhile, although seeing things take an unexpected turn in this episode made it moderately more entertaining. Jaime’s plan to rescue Margaery (Natalie Dormer) with the help of the Tyrell army, before her humiliating ‘walk of atonement’, was all poised to work and end the frustrating dominance of the Faith Militant and the High Sparrow (Jonathan Pryce), but Jaime was thrown an unfortunate curveball: Margaery’s become a true believer, and her sway over King Tommen (Dean-Charles Chapman) is so strong that she’s also recruited him to the cause. And now it seems naive Tommen’s beginning to see what the future of his rule of Westeros could be (a deeper union of Faith and the Crown), and perhaps nobody can steer him away from this unwise path.

Unfortunately, I don’t think this development bodes well for the future of the King’s Landing storyline—particularly since Jaime was relieved of his duties soon after, then sent to oust the Blackfish from Riverrun in the north. Losing Jaime means this subplot’s future rests on the slender shoulders of Cersei (Lena Headey), who isn’t the best character without others around to support her. The trial by combat she mentions, involving the Mountain as her champion, may be diverting to watch when it happens, but I have serious concerns because the drama’s so lacking in this part of the world. Unless, perhaps, Margaery’s just playing a game and is going to use her unique position for her own ends—as a trusted acolyte of the Faith Militant, but also someone who can control the mind of a king? It’s possible.

Unseen on Game of Thrones for a long while, the despicable Lord Walder Frey (David Bradley) made a welcome return–outraged that his sons Lothar and Walder Rivers have let Brynden ‘the Blackfish’ Tully take back Riverrun. And he plans to retake it using an ace up his sleeve: his prisoner since the Red Wedding, Edmure Tully (Tobias Menzies), the Blackfish’s nephew. Not much else to add here yet, but I’m pleased the political situation in the north’s beginning to heat up and get more complicated. 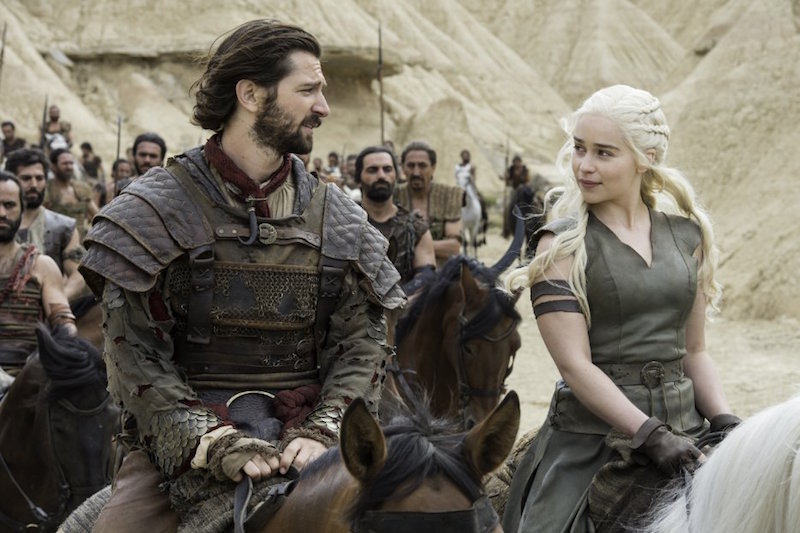 In the Dothraki Sea

Only another small scene for Daenerys (Emilia Clarke) this week, as her storyline slowly finds a new direction. I don’t mind, because Clarke is fantastic whenever she’s asked to be the bad-ass leader she stopped being a few seasons ago—when she instead became a regal queen, secluded in her lonely temple, when riding an enormous dragon and making a rousing speech in Dothraki to hundreds of bearded men is more her style. So now it seems she’s bending Dothraki tradition by asking everyone to become her ‘bloodriders’, not just three men, and help her take the Seven Kingdoms by crossing the sea and defeating the armies they face there.

And who seriously thinks it’s beyond her, now Dany’s amassed such a fearsome mix of warriors and three large dragons to terrify the population? And unlike her native rivals for the Iron Throne, she’s not ruling through fear, or loyalty to the Targaryen house, she’s demonstrating her ‘divine’ abilities and has become a living legend. I’d follow her. I just have a funny feeling she’s going to arrive on the shores of Westeros, somehow discover Jon Snow’s a half-blood relation (still unconfirmed on the show, but…), then help him destroy the White Walkers with the tactical help of the all-seeing Bran, before perhaps bringing a different type of rule to Westeros. Democracy perhaps?

“Blood of My Blood” was very much a midseason piece-moving episode, but that’s fine by me. You only achieve dramatic highs with the right amount of groundwork and character-building, so it looks like episode 6 is paving the way for an interesting second half. Of particular note was the re-introduction of characters we haven’t seen for a very long time, and the widening of this extraordinary world with House Tarly. There’s definitely a sense of fresh impetus and direction to the show this season, as the HBO drama perhaps knows the end’s in sight for their take on George R.R. Martin’s story…