There was a surprise four-year time-jump for the penultimate episode, “NIM”. That’s a lifetime in technology circles. It’s 1990 and Donna’s (Kerry Bishé) using Windows 3.0 and wearing pantsuits as a senior partner at Diane’s firm, following Mutiny’s collapse. But that’s far from the only thing to have changed. Gordon (Scoot McNair) and Donna have divorced, rather amicably, and Gordon’s taken cooking classes and is dating other women. Joe’s (Lee Pace) stepped back from public life following Ryan’s suicide, although he’s worked with Gordon to create a regional NSFNET. And Cameron (Mackenzie Davies) made a go of life in Japan with her husband Tom (Mark O’Brien), creating the popular ‘Space Bike’ franchise. Yes, that video game we saw her dream up last week somehow ended up becoming a big hit.

Much of “NIM” was spent acclimating to all these big changes. I really liked how the Clark’s seem a lot happier apart, with Gordon and Donna have a lot of fun together chatting in a bar (a scene that almost played like a role-play between a married couple), and being sensible about the parenting issues they’re facing with Joanie—who, naturally, has grown up to become a cliched stroppy teenager who’s rude to her father’s girlfriends and just want to go out and party. Joanie was never a character before now (more a child presence), but it was one of the episode’s few disappointments that she’s grown up to become a walking 14-year-old stereotype. 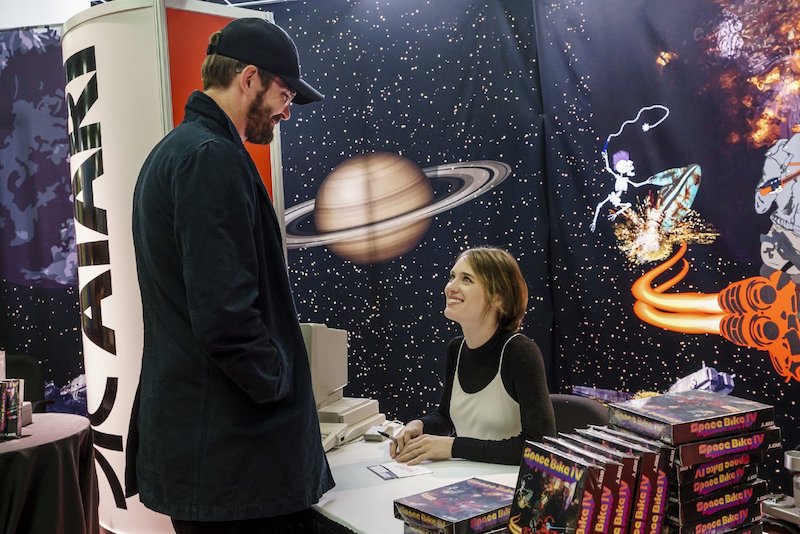 However, most of “NIM” was a delight. The big character development was Joe reconnecting with Cameron at COMDEX (where they were humiliated back in ’83 with the Giant personal computer). It felt like two friends just getting to know each other again, but, of course, old feelings were reignited and they eventually slept together. It was an overdue return for a relationship that fuelled much of the drama in Halt and Catch Fire during its first season, before the story pushed into other areas and Joe was often separated from the others.

Broadcast as a double-bill, “NIM” largely existed to set-up “NeXT”, where Donna told Joe and Cameron about her idea for a World Wide Web that will unite all if the existing networks and provide consumers with an easier experience to navigate “the internet”. I think we forget that the web had to be built, to some extent, so it was intriguing to see everyone come together at Mutiny’s abandoned premises for a two-day brainstorm—with the writers getting an opportunity to once again mention concepts and brands everyone today takes for granted, but back in 1990 were very new. A lot of it hinged on what Joe had picked up from a conference in Paris, about the hypertext toolkit for the World Wide Web (transfer protocol, HTML) and how that might be used to design the “tunnel” he envisions users to travel down before arriving. And once again, Joe’s genius was on full display: his technical know-how may lag behind others (although he’s improved), but it’s his ability to communicate complex ideas and stir passions in people. He’s good at pushing change. 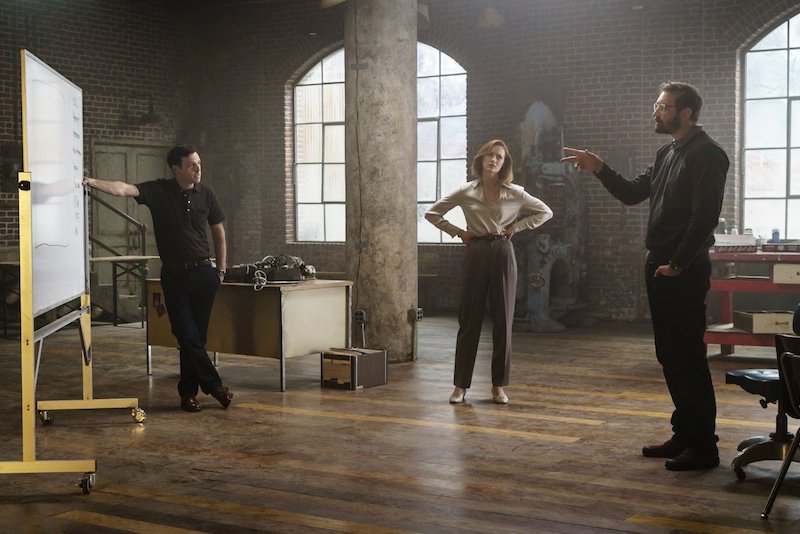 Of course, it wasn’t plain sailing. Tom was cold on the WWW idea, coming from a career in Japan where he mixes with corporations who are naturally closed to the idea of ‘open sourcing’ code. But he was also just naturally suspicious around Joe (especially with Cameron by his side, given their history), and it all came to a head with a fight where Joe broke his wrist.

The “getting the band back together” vibe of the finale was huge fun, even if the characters haven’t actually been separated very long from the viewer’s perspective. It helps that I really do want to see these characters make amends and do something to change the world and the course of mankind. Which, let’s face it, the internet managed to do. They’re individually very talented people with different skill-sets, but magic only happens when they set aside their differences and work together.

Intriguingly, this has still to happen. Cameron ultimately decided that she can’t work with Donna ever again because the trust has gone between them, and Donna’s reaction was to accept the project needs a programmer like Cameron more than it needs her… so she left her World Wide Web idea behind. But that may not be the end of Donna’s story, as we see Donna gather herself in her car and make arrangements for a trip to CERN, home of the nascent web—probably to do something that makes her indispensable to the rest of the team. We’ll have to see what happens in the fourth and final season, which AMC have thankfully decided to make, despite the show failing to become an award-winning hit. In some respects, we kind of know the end of this story (we’re living the dream that Joe, Gordon, and Cameron are chasing), but I’m still interested to see exactly how Halt and Catch Fire’s ‘alternate timeline’ pans out. And if the writers will remember Gordon’s supposed to be suffering from brain damage…

Written By
Dan Owen
More from Dan Owen
For your consideration. We’ve been getting more flashbacks than usual this season,...
Read More