Television adaptations will often take a different approach to the movies or books they’re based on. Michael Crichton’s Westworld (1973) completed its story in 88 minutes, whereas we’ve already spent over 600 minutes watching this HBO drama, before a full-blown robot uprising. But that’s one of the benefits with television, which can give audiences more time with characters, to make you care deeply about them, or explore some wrinkles in the concept. That said, I don’t think fans of Westworld will be disappointed by season 2’s premiere, “Journey into Night”, which throws us into the thick of what Crichton’s original film was all about… 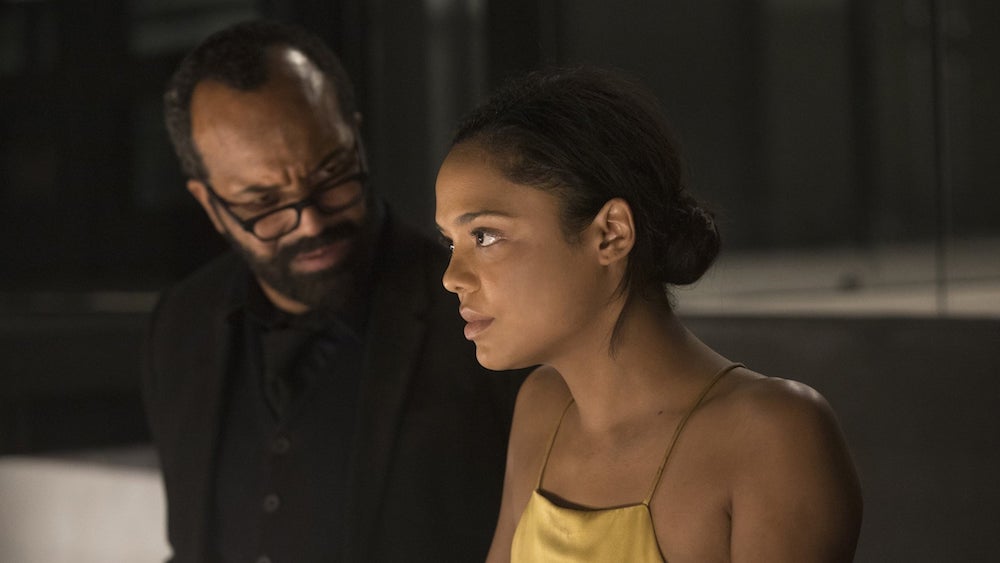 It was a twist a lot of people saw coming, because by their very nature of appearing identical to humans there’s a storytelling temptation to upend expectations with such a move. This season should result in a fascinating internal tug-of-war for Bernard, who’s believed himself human for years, but is actually one of the machines he’s been actively involved in enslaving. What side he’s going to ultimately choose remains to be seen, unless he’s going to become the only person who could possibly broker peace…

“Journey into Night” mostly concentrated on Bernard, with the action picking up a few week’s after the massacre where Ford allowed himself to be executed as he flipped the switch to allow his hosts to become self-aware. Interestingly, the narrative bounced between the past and the present, gradually letting us know how Bernard escaped with Charlotte Hale (Tessa Thompson) by hiding out in a stable with some other Delos VIPs. They escape to a secret bunker, which is an ironic setting considering both of those characters have secrets themselves: Bernard realises he’s been damaged and is malfunctioning, so has to surreptitiously remedy himself by injecting a white fluid from one deactivated host behind his ear; while Charlotte finds she won’t be evacuated until her contact in the outside world received the proprietary information she was going to smuggle out inside the host body of Peter Abernathy. 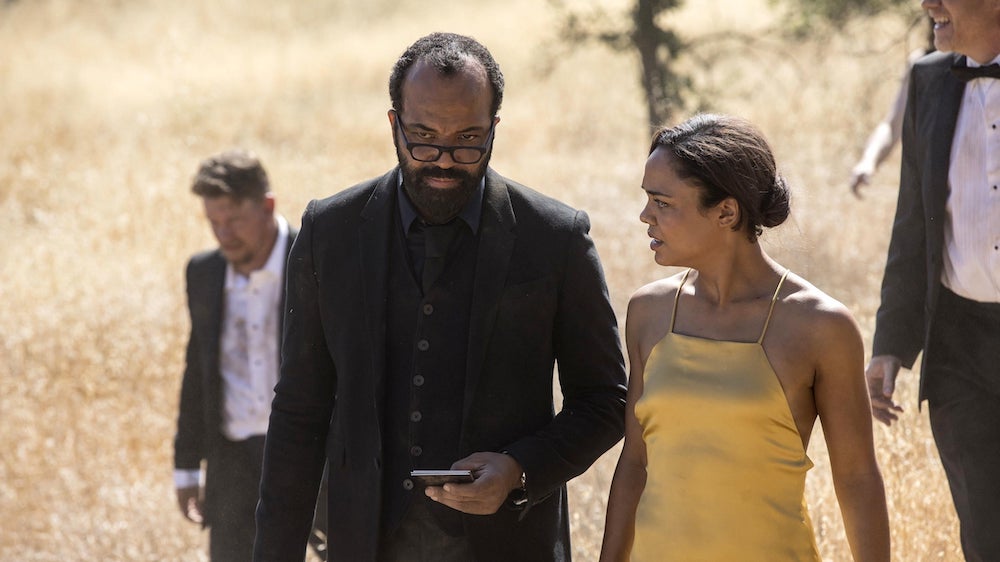 However, one of the episode’s biggest surprises actually snuck by without much fanfare, in a brief exchange of dialogue inside the secret bunker. “Are we logging records of guests’ experiences and their DNA?” asked Bernard. “We’re not having that conversation, Bernard” came Charlotte reply, shutting him down. But this actually raises a lot of fresh questions, if one presumes Delos are doing exactly that. It’s often been speculated what the point of Westworld, and the other parks are, beyond a money-making venture to entertain the filthy rich.

If Delos are using their guest’s experiences without their consent — perhaps to tailor the experience better? — then that’s an infringement of their privacy. But if they’re taking their DNA, that’s alarming and creepy. Why would they need human DNA? Are they using it to create hosts? Are the hosts half-biological replicas of previous park guests? Or is there a more nefarious plan happening in the outside world, so the Delos theme parks are just a testing ground for a grander plan? The trailer for season 2 suggests we’ll be seeing more of the real world beyond park grounds, so maybe a larger conspiracy will be revealed…?

In the present, Bernard’s found on the shore of a beach by a Delos security team led by Karl Strand (Gustaf Skarsgård, of the Swedish acting dynasty that gave us Alexander and Bill). Unaware that Bernard’s a self-aware host, too, he’s allowed to ride along in their dune buggies as Delos try to assert some control over the situation. And, interestingly, the episode ends with them finding a hitherto uncharted ocean filled with hundreds of host bodies that Bernard takes responsibility for killing. What’s more, amongst the bodies is Teddy Flood (James Marsden). More on that later… 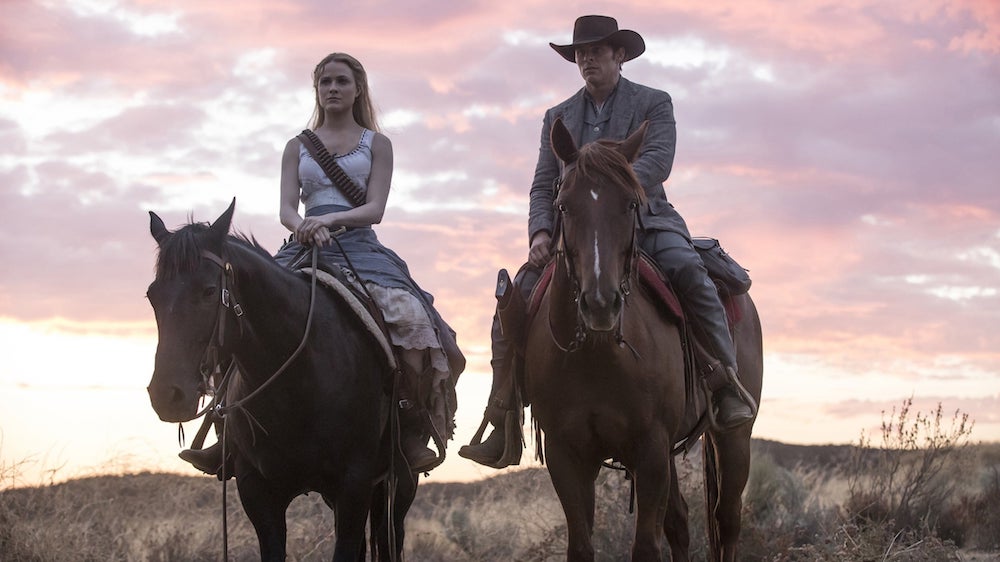 I told you, friend, not all of us deserve to make it to the valley beyond.—Dolores

My favourite character is Dolores (Evan Rachel Wood), whose character arc from sweet daughter of a local rancher to tough-ass femme fatale comes to fruition here. She’s abandoned the demure and smiling personality of the Dolores we know, having learned the truth of what she is from “Arnold”, and has instead merged with her bad-ass Wyatt persona to become the winsome face of death for many Delos employees who have fled the scene of the massacre in their cocktail dresses and sharp suits. In a sort of Bonnie & Clyde dynamic with Teddy, the pair are riding across the plains with Angela (Talulah Riley), rounding up frightened VIPs like cattle, then making them see the error of their ways (“have you ever questioned the nature of your reality?”) before cruelly leaving them tip-toeing on wooden crosses with a noose around their necks. The fact Teddy’s not floating in the uncharted ocean obviously places this subplot as happening before the present day reveal with Bernard, mentioned earlier. 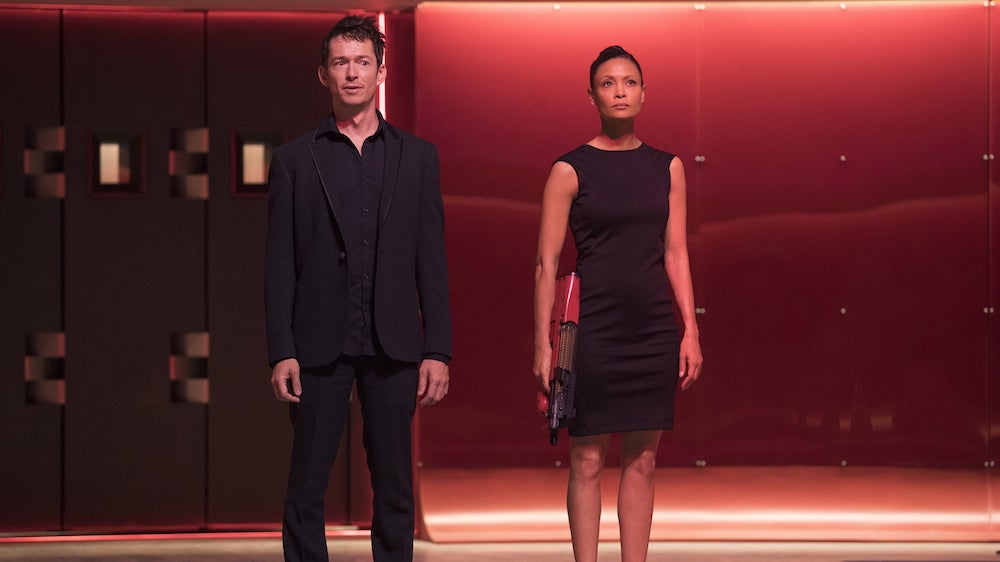 If you try that again, I will relieve you of your most precious organ and feed it to you. Though it won’t make much of a meal.—Maeve

The more I think about, one strength of Westworld is that so many of the characters could be considered your favourite at any given time, with the story of Maeve (Thandie Newton) proving particularly unpredictable. I never expected to see a host break its programming early into last season, awakening inside the Delos facility, then using her wiles to manipulate two technicians there into granting her more skills in order to orchestrate an escape. Maeve’s storyline this season was setup in the finale, as she decided to instead return to Westworld and find her daughter from a previous “loop” she was in.

In “Journey into Night”, this plan is put into effect with Maeve finding a use for Lee Sizemore (Simon Quarterman), the unlikable yuppie whose job is to dream up the host’s identities, personalities, and construct the “game” narrative. Frankly, Lee was one of the least compelling characters of season 1, and for a moment I thought the premiere was going to write him out by having Maeve just kill him, but it seems not. Instead, Lee’s essentially a hostage of Maeve and her lover Hector Escaton (Rodrigo Santoro), asked to accompany them into the park because his knowledge of the people will come in handy. But credit to Quarterman for doing a full frontal nude scene, because in the age of Ultra HD that takes… well, balls. 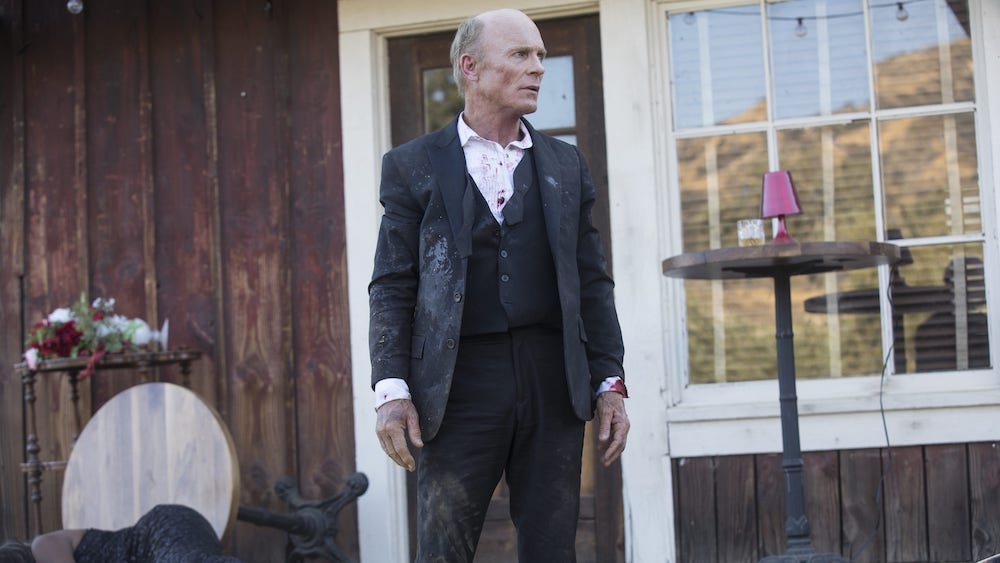 Congratulations, William. This game is meant for you.—Young Ford

Considering he was setup as the most interesting character, and was the most recognisable part of the original movie in Yul Bryner’s hands, the role of the Man in Black (Ed Harris) was of mixed success last season. Harris is great playing the ageing Westworld junkie, obsessed with the idea there’s a greater truth and purpose to the whole experience, but some of those ideas were roughly assembled and not cohesive.

One loose thread, seemingly abandoned when the series underwent a mid-season course correction behind-the-scenes, was the MIB hunting down hosts to scalp them and find maze logos printed on the inside of their skulls. It was a big part of the pilot episode, but never got properly explained. Interesting, there were signs in this premiere the writers have found an explanation and are returning to this idea, rather than let it exists as a narrative dead end. So, during a scene where Strand’s team (ironically) scalped a Native American host, to playback his final moments after gruesomely extracting his “brain”, the same maze logo was seen on the skull…

Regardless of that curious callback, the MIB/William was shown to have survived the massacre (by hiding under dead bodies) and is now continuing his obsession. He’s also very pleased the Wild West role-playing experience has become “real” now the safety protocols have been removed by Ford. In one interesting moment, the MIB even converses with the 10-year-old host version of Robert Ford (Oliver Bell), who speaks in a mixture of the young actor’s voice and that of Anthony Hopkins. And the boy tells William the new game is to find the Door. For a second, I thought there was a chance Ford had cleverly download his consciousness into this replica of himself as a kid, but if that’s true it doesn’t matter because William shot young Ford in the face and rode off… 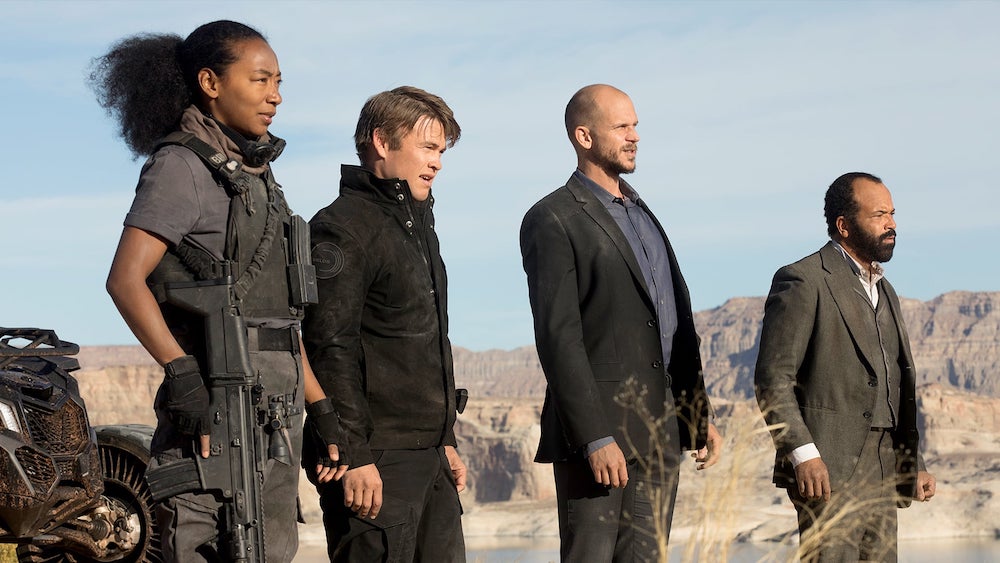 This was an entertaining premiere, although I don’t think it was deserving of a 68-minute runtime. There already seems to be some time period back-and-forth happening, which was the basis for one of season 1’s key twists (that William’s storyline was a flashback explaining the origin of the MIB), but let’s hope that doesn’t become too confusing. It’s easy to lose the thread with these things, and I know already that some people were scratching their heads when Teddy’s body was seen amongst the floating corpses Bernard took responsibility for killing en masse.

So it would seem the Dolores/Teddy scenes are taking place before Bernard’s scenes post-bunker, but there’s a slight feeling of the writing needlessly confusing matters. At its heart, Westworld is a simple story of humans versus robots, and sometimes you just want a clear linear structure you can engage with.

There’s also a question of who are the heroes and who are the villains? Are we supposed to be behind Dolores, who’s now killing rich people like it’s a bloodsport? Does Maeve’s desire to be reacquainted with her daughter give you enough to want her to succeed? Or should we be on the side of the humans, who were mostly unaware the hosts were becoming aware of their situation, so most of them are blameless.

I think Bernard is the closest character we have to a “hero”, because he straddles both divides and allows us to see things from both the human and host perspectives. That’s likely why he was the focus of this premiere, because it’s often difficult to approve of what the other characters are doing…  even if you can understanding why they are.

“Journey into Night” was a decent continuation of “The Bicameral Mind“, setting up interesting things almost on the sly (where did the Bengal tiger come from, and how has it traversed park boundaries?), but it was also strangely unambitious and perfunctory. Maybe we’re just being eased into things, because there’s a lot to remember from season 1, which finished over a year ago now. But I do think Westworld needs more straightforward drama and relatable character relationships, because it’s sometimes more weighted towards creating mysteries and making you curious about throwaway lines of dialogue. And that’s fine, although I’d rather be emotionally invested in Dolores and Teddy as a romantic couple trying to take on the world(s)… but, frankly, I’m not.

YOU, ME & THE APOCALYPSE – ‘Episode Ten’