The USS Discovery battles against Control in a fight not only for their lives but for the future, with a little help from some unexpected friends...

All things considered, I got what I wanted from “Such Sweet Sorrow: Part 2”, but in some ways that was a disappointment. I was curious to see if Star Trek: Discovery could pull off a mindboggling twist, or confirm a fan-theory that Control is a proto-Borg the crew would exile to the faraway Delta Quadrant (where it would evolve into a deadly nemesis for The Next Generation era), but none of that came to pass. Instead, it did what was expected with the Red Angel mystery - with the only late “surprise” being that Michael Burnham (Sonequa Martin-Green) realised she never travelled back through time from the future, but the present. Shrug?

After last week’s “Such Sweet Sorrow” prepared the groundwork and laid out the emotional stakes, “Part 2” went into full-blown epic space battle mode from beginning to end. I remember being wowed by Star Trek: Deep Space Nine whenever that series delivered big action set-pieces, like “The Way of the Warrior” in 1995, but those sequences look positively tame compared to what Star Trek: Discovery is capable of some 25 years later. Indeed, the VFX work on this show is astonishing; comforting equalling what the $185M reboot movies do. They even did a fist-fight in a corridor with unreliable gravity, Inception (2010)-style, because why the hell not? 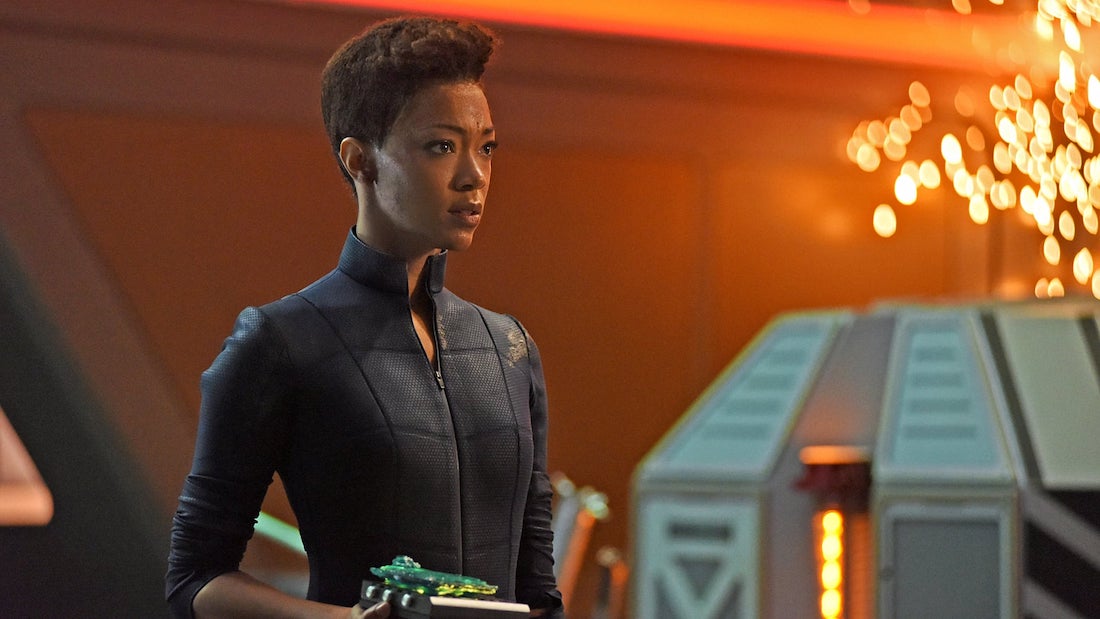 As a director, Olatunde Osunsanmi did a remarkable job ensuring every moment was visually tight and thrilling, but with enough personal interactions that didn’t get lost in the cacophony of explosions, phaser blasts, and photon torpedo strikes. He was well served by the aforementioned VFX, which pulled off some beautiful visualisations - like the USS Enterprise bravely shielded the USS Discovery from physical damage, or the trippy sequences with Burnham travelling through a wormhole in her time-suit. Judged purely on a technical level, everyone involved needs to take a bow. This was an epic hour of TV action filmmaking.

But was it satisfying overall? As I said, “Part 2” concluded season 2’s arc in a manner we’d been expecting for a while now - until the writers threw a curveball by having the Red Angel turn out to be Michael’s mother. But it seems the writers wanted to have their cake and eat it, so Michael wound up being a second Red Angel with a different purpose. This finale had to involve her going back in time to create those mysterious celestial signals, which will lead the Discovery crew to this climactic space battle against Leland (Aaron van Sprang) and his Control ships. It made enough sense. The whole season was a Mobius strip. 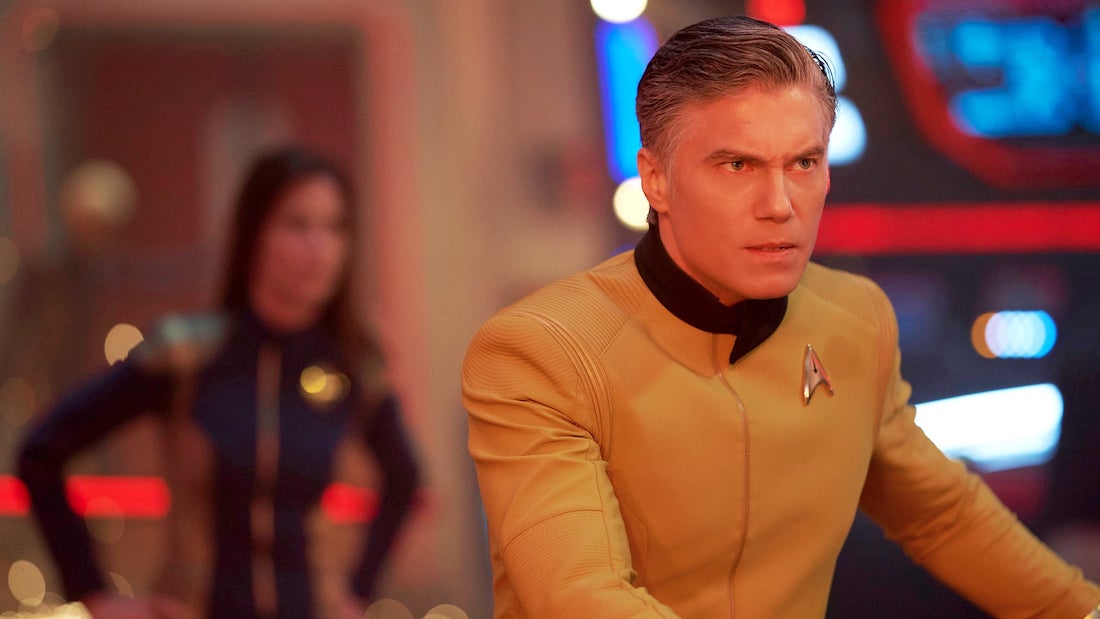 However, I’m not sure why the USS Discovery had to stick with its plan to follow Michael through the wormhole, to ensure Control can never subsume the alien sphere’s database of knowledge and become sentient. Once Georgiou (Michelle Yeoh) killed Control-Leland using a magnetised quarantine area in Engineering, wasn’t the threat annulled? And why did the USS Enterprise crew and Ash Tyler (Shaza Latif) have to lie about what happened to Discovery/Michael to Starfleet, who’ll now bury all knowledge of the spore-drive? It obviously helps nudge the show’s continuity towards what was established in the Original Series going forward, as spore-drives aren’t a known technology (and would’ve helped the USS Voyager get home faster!), but are we expected to believe this explains why Spock (Ethan Peck) and Sarek (James Frain) never mention Michael ever again? It seems a bit of a stretch

I was poised for Michael to alter history further using her suit, so she was never adopted by Vulcans and Spock didn’t grow up with her as his sister. But it didn’t happen. 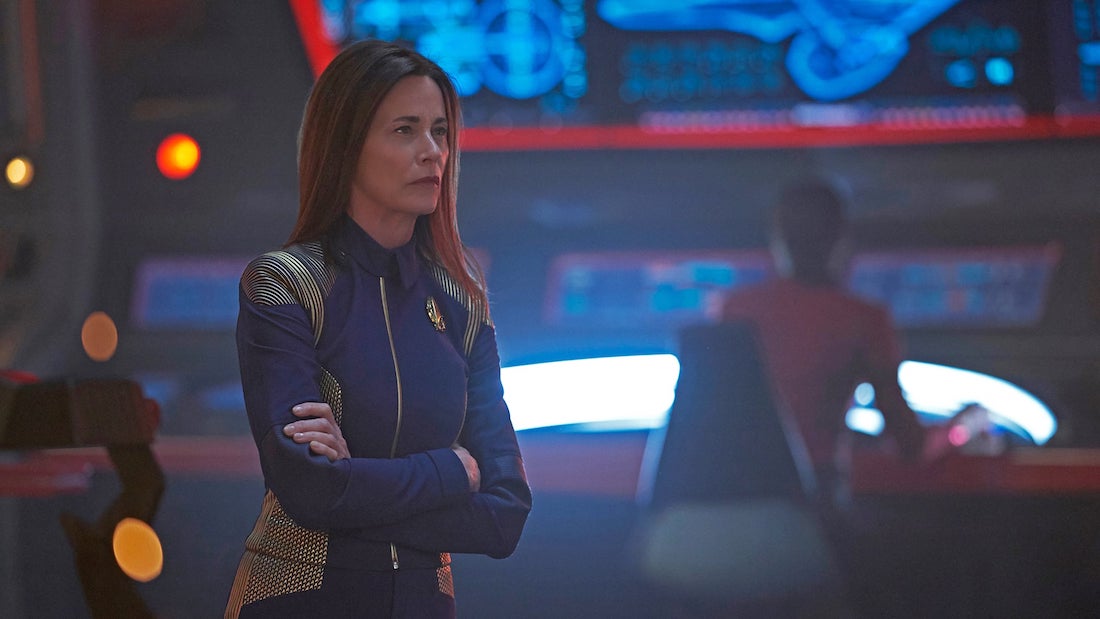 Where the season ends is actually the most interesting part of this finale. Spock shaves his beard and pulls on his blue uniform, to join the Enterprise Bridge looking marginally closer to Leonard Nimoy’s version of the character. (Although I prefer the beard now.) He’s also been advised by Michael to find someone who’s the opposite of him and embrace that, which is clearly becomes the impetus behind his legendary friendship with James T. Kirk. It did seem strange to end the show with the Enterprise warping away to new adventures with Captain Pike (Anson Mount), leaving the fate of Discovery up in the air. But we can assume they safely exited the wormhole in the distant future, and season 3 will continue their journey a thousand years hence. I’m very excited to see that play out, despite the very idea being fraught with dangers…

It was one thing when The Next Generation moved things forward 78 years from the time of the Original Series, but 1,000 years? What will that be like? One assumes the USS Discovery won’t be analogous to a WWI biplane touching down on a modern aircraft carrier filled with F-35s, but does that mean the crew will find an Alpha Quadrant that’s been technologically stunted for some reason? The job of totally rethinking the landscape of all the alien civilisations and interplanetary politics we’ve come to understand over the decades Star Trek’s covered will be an enormous creative challenge. But hey, when a new Trek series was first announced there were strong rumours of a show that would leap around into different eras, so maybe that idea’s back in vogue and Michael’s time-suit will now occasionally drag Discovery to all manner of places and times? 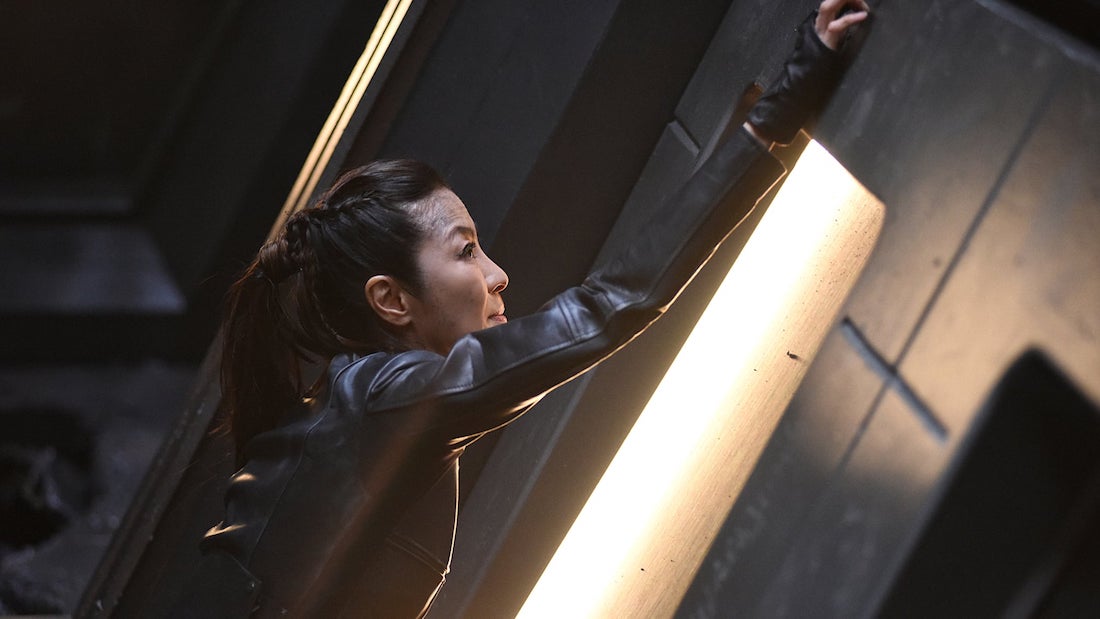 Back to the episode itself, and this was definitely a simple but effective wrapup that didn’t offer too many big shocks, but it was a joy to watch and managed to squeeze in good character moments during the action-packed fireworks. Dr Culber (Wilson Cruz) reconnected with Stamets (Anthony Rapp) while treating him for life-threatening wounds, in an emotional and believable scene; Spock embraced his humanity to put aside Vulcan logic and believe Michael would be successful in her mission because “the universe is under no obligation to make sense”; Michael’s final moments with Spock were a great way to end their dynamic as siblings if Discovery’s closed the book on being a prequel now, and I liked her pointing him towards a guy like Kirk; and there was a notable death in Admiral Cornwell (Jayne Brooks), which perhaps could have been handled better given the likeability of her character. She had far more screentime than Airiam, whose death a few episodes ago was more emotionally engaging. There just wasn’t enough time or focus here, admittedly, but it’s a shame.

In summation, the second season of Star Trek: Discovery was more confident and entertaining than the first. It was still more serialised than I expected it to be, but that wasn’t too much of a problem because the Red Angel arc was robust enough to sustain 14 episodes. Well, just about. It got a little stupid towards the end with the introduction of “time crystals” and some elements never came together for me, like Section 31, but the highs outweighed the lows. As a lifelong Trekker, I’m having a lot of fun with this series, although I still wish it would find room to tell more single stories tackling pure sci-fi concepts. Deep Space Nine should be its Red Angel to follow. At the moment Discovery gives you a soupcon of one-off adventuring, whenever it remembers to, but seems more determined to be a wham-and-blam spectacle. Luckily, it still has solid characters and enough heart and optimistic spirit for me to see the blood of classic Star Trek coursing through its veins.

Now let’s spend a year listing the pros and cons of this show moving everything into a different millennium: the year 3255. Oh boy.

Written By
Dan Owen
More from Dan Owen
A cat and mouse develop a rivalry in New York City while...
Read More