S. Craig Zahler (Bone Tomahawk, Brawl in Cell Block 99) returns with another slice of macho chills, this time focusing on two crooked cops in the fictional town of Bulwark. Specifically, veteran police officer Brett Ridgeman (Mel Gibson) and his younger partner Anthony Lurasetti (Vince Vaughn), who constantly wind each other up while on the beat, but share a similar worldview and attitude towards the city’s criminal element.

After getting caught on camera roughing up a suspect during a drugs bust, Ridgeman and Lurasetti are suspended without pay by their boss, Lt. Calvert (Don Johnson), and advised to lie low until the media storm blows over. During their downtime, a despondent Ridgeman decides to use his underworld contacts to get rich quick and hears about a lucrative job that’s about to go down —masterminded by callous thief Lorentz Vogelmann (Thomas Kretschmann). And so, the two dirty cops go on a stakeout during their own time, intending to rob the robbers and solve all their financial problems. 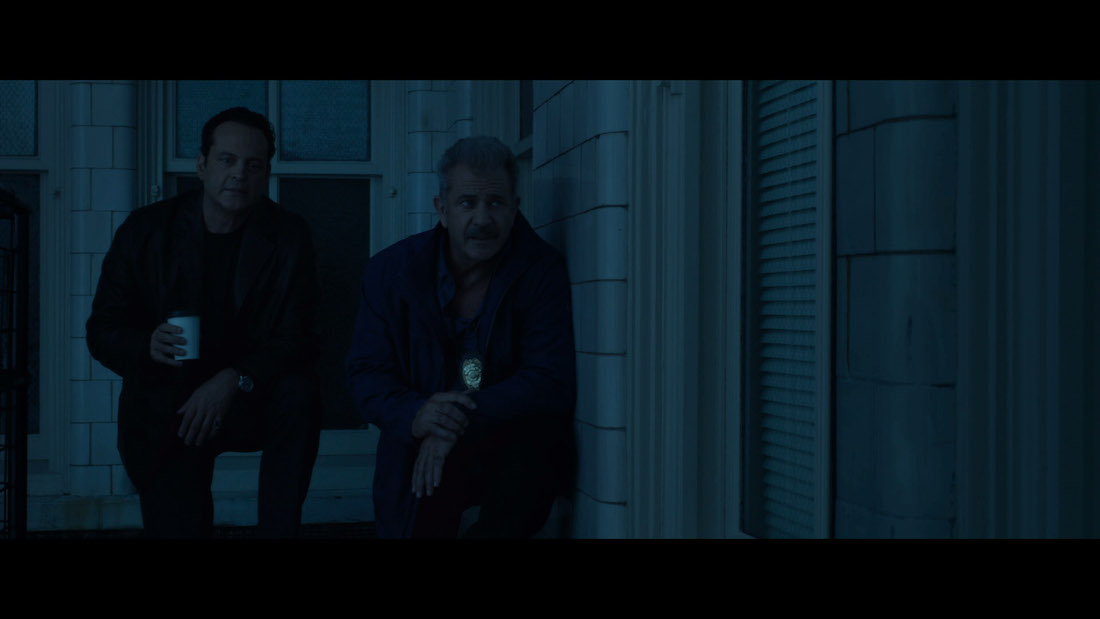 Dragged Across Concrete is another mean and nasty crime thriller, told in a more leisurely pace over 159-minutes, focused mostly on just two men. This means it has plenty of room to breathe and pull audiences into its relaxed rhythm. The one thing all of Zahler’s movies have in common is how they gently lead you into a dark world, walking down an increasingly sinister path, eyes opening to the darkness inside men’s souls, as the unpleasantness of the situation ramps up.

Bone Tomahawk (2015) was a Western that took audiences on a nightmarish trip to a climax involving troglodyte cannibals, whereas Brawl in Cell Block 99 (2017) was essentially a string of ever-worsening problems to be overcome in a grim prison. Dragged Across Concrete is more like the former, but with a more protracted buildup to the crescendo. Zahler is a published author and I always get a sense of literary flow to his screenplays, which don’t seem as beholden to “the rules” of scriptwriting. His style has prompted comparisons to early Quentin Tarantino, but he doesn’t seem as playful with his camera, or as talented with dialogue, although both share a passion for gritty crime flicks and the look and feel of 1970s cinema. 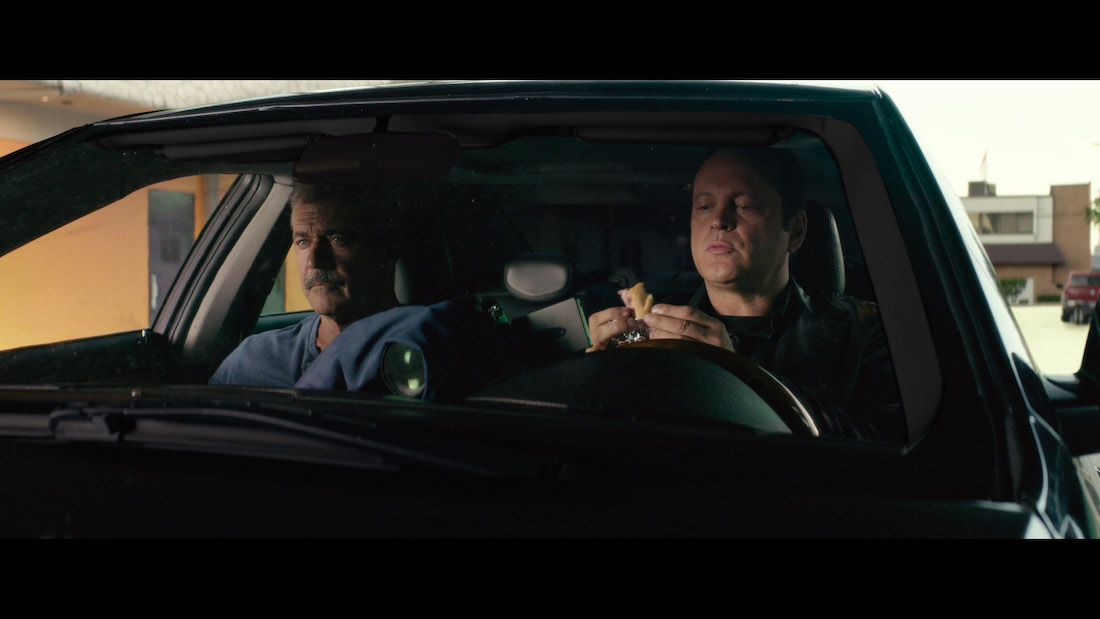 What’s becoming apparent with Zahler after three films are the controversial views of his characters and how they could be mouthpieces for his own right-wing politics. Dragged Across Concrete concerns two bent cops, one of whom is undoubtedly a racist (as is his loving wife Melanie, played by Laurie Holden), and that bigoted character’s played by none other than Mel Gibson— who almost destroyed his career after getting caught on tape using the N-word.

The similarities between that real-life incident and what happens to Gibson’s character in Dragged can’t be a coincidence, can it? Does Zahler think Gibson was mistreated by the media and wrote this role with him in mind? Once one starts to consider the possibility Zahler has distasteful opinions and views about racial matters, it makes one reevaluate some of the decisions he’s made in his films—like portraying Native Americans as bloodthirsty savages in Bone Tomahawk, even if that particular tribe were described as abnormal pariahs. But is that enough of a defence? 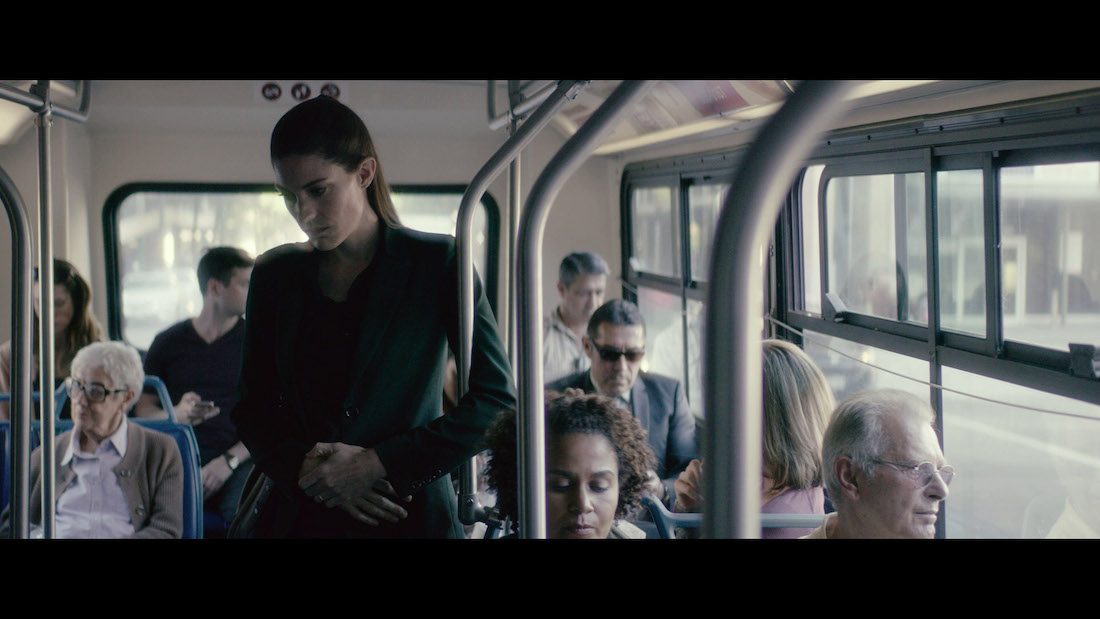 A short while ago, Zahler’s IMDb Pro page also came to wide attention, where he rates the movies he’s watching. Some noticed how many films about black people’s lives or from black directors receive strangely low scores. He also described the widely acclaimed Get Out (2017) as “manure” in Fangoria, then made the puzzling decision to write  Puppet Master: The Littlest Reich (a sequel in the long-running horror-comedy franchise about killer Nazi puppets).

I don’t know the truth of any of this, but I doubt it’s as straightforward as some make out. Dragged Across Concrete may star Mel Gibson as a politically incorrect cop, but almost half the movie follows two black characters in opposition to the leads —ex-con Henry Johns (Tory Kittles) and his childhood buddy Biscuit (Michael Jai White). They team up to help Vogelmann’s crew pull off their robbery as getaway drivers of an armoured van. Dragged tracks two separate stories that dove-tail at the end but, without giving too much away, Henry shows himself to be a fairly decent guy who keeps his word. There’s definitely some redemption here, with Ridgeman the character whose prejudices get the better of him and push events down a negative path. If Zahler was a truly awful human being with some kind of sick agenda behind his films and what he wants to communicate, there are other choices the story could have taken. Lurasetti’s wife is also revealed to be black, which puts an intriguing spin on the cop’s relationship in general. 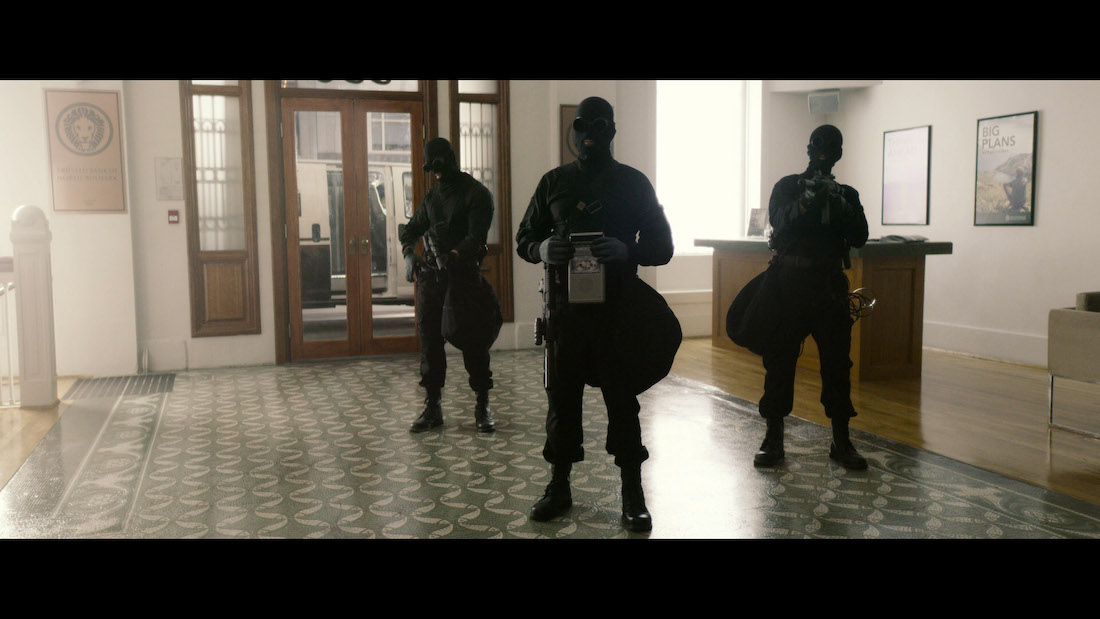 Some have complained about the film’s relaxed pace, but I found that to be one of its strengths —although maybe it could’ve lost 20-minutes to make it drum tight. It’s a simple story and you’re fed information to slowly digest and start forming opinions and predictions about what’s going to happen. But the story still manages to outmanoeuvre you. A sizeable chunk of the narrative is just watching Ridgeman and Lurasetti on their round-the-clock stakeout, doing the kind of tedious work a city cop is forced to, but they’re an interesting duo to watch.

Gibson’s doing some of his best work in years as grizzled Ridgeman, while Vaughn continues to impress now he’s ditched those godawful comedies that stagnated his career the 2000s. The fact Ridgeman and Lurasetti don’t seem to completely like each other only adds to the charm, as it’s a more realistic take on the ‘mismatched cops’ trope from the ’80s (of which Gibson starred in the template for them all, Lethal Weapon). But when shit gets serious and these cops have to get their hands even dirtier, one can’t help but get fully invested in what’s happening through to the end. 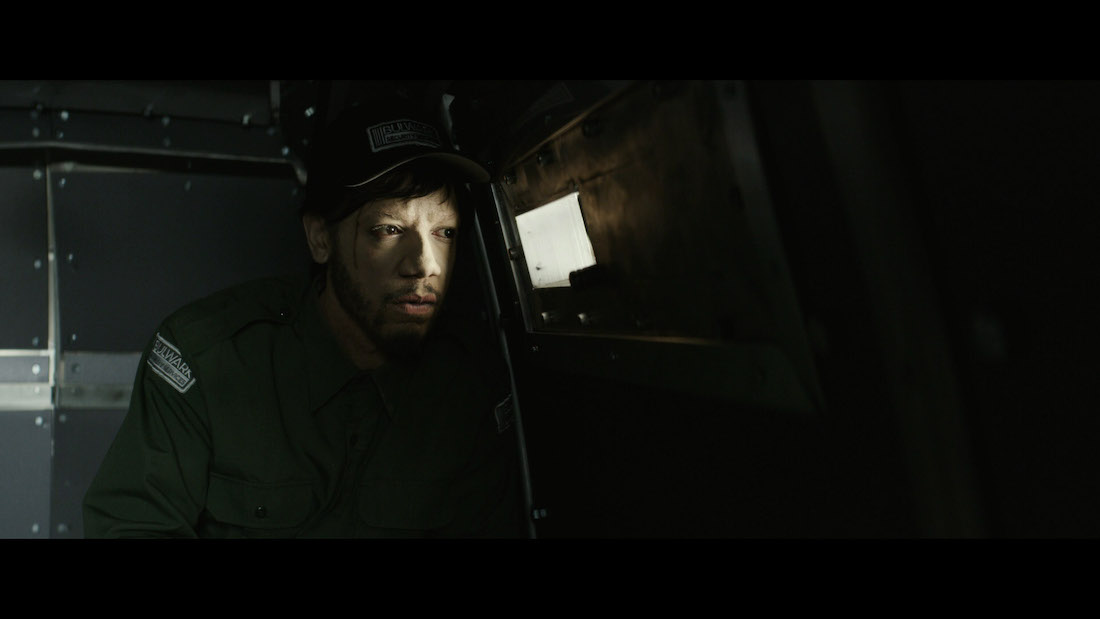 This is a less violent film than Brawl and Tomahawk, or perhaps not as viscerally brutal. There are still moments of eye-popping bloodshed, of course, but Zahler knows how to stage things for maximum impact without going overboard. Greg D’Auria’s editing helps tremendously, as sometimes we only see a few frames of the damage a machine gun does to a person’s body before it cuts away. The real horror happens in your imagination, almost like a retina burn. There’s one particular moment in a bank that’s harrowing when it suddenly happens, thanks to a protracted setup that, in hindsight, only existed to strengthen the audience’s attachment to a particular random character. It’s diligent work just to ensure the audience feel something deep in their gut.

In summation, Dragged Across Concrete is another unflinching, messy, love-it-or-hate-it movie from Zahler that can’t be ignored because it’s so well made, compellingly performed, and rewards patience. I enjoy movies that feel dangerous and challenging, if only because you can’t help wrestling with the politics of the characters and the filmmaker’s vision. In a world of anodyne movies aimed at the mainstream, test-screened to death so they’ll offend nobody and make millions, it’s good to see something that prompts discussion and soul-searching. 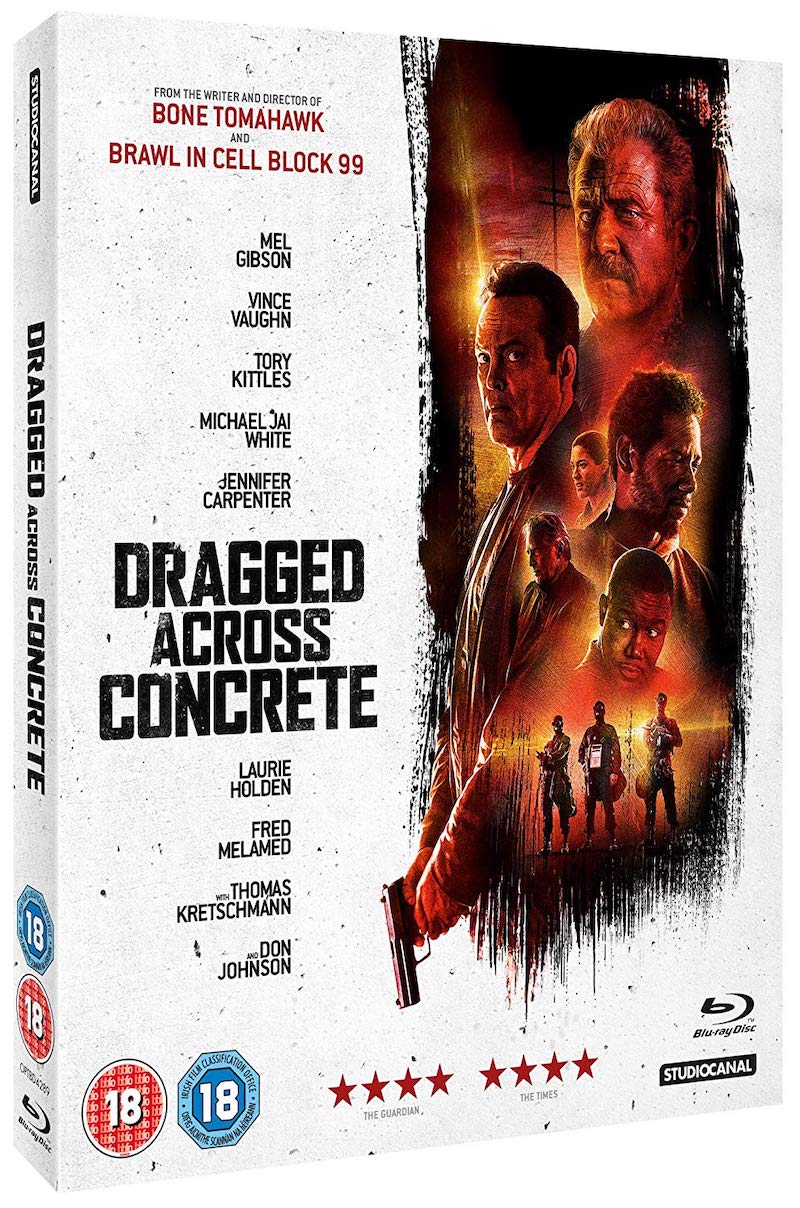 StudioCanal brings Dragged Across Concrete to 1080p Blu-ray with its 2.40:1 ratio image in pristine condition, sourced from the Red Weapon Helium camera it was shot on. The transfer captures the moody neo-noir lighting Zahler loves so much, with great detail even in the shadows. It’s a shame there’s no 4K Ultra HD version on offer, which would improve matters even further thanks to the High Dynamic Range (HDR).

The audio is a DTS-HD Master Audio 5.1 mix that contains good atmospherics and enjoyable bass, particularly during the action sequences that rely on vehicle engines and gunshot noises. The dialogue feels very anchored and is never lost. 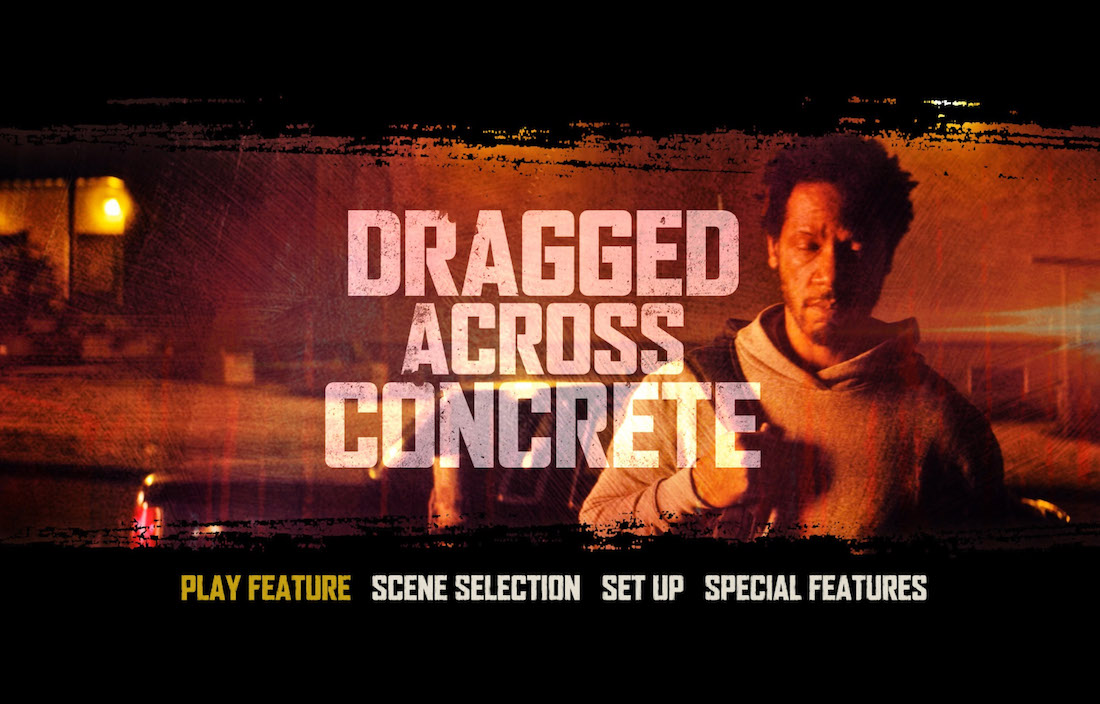