Good Boys boasts the sort of three-word, slam-dunk pitch that makes you wonder how it took this long to happen: “Superbad with kids.” Though Superbad (2007) is the go-to comparison for seemingly every vaguely raunchy comedy with a young cast, it’s hard to deny it here—particularly with Seth Rogen and Evan Goldberg producing. If it’s a well-trodden path, at least Good Boys succeeds in walking it in a funny and heartfelt manner, much like its older sibling.

As with most films about kids, Good Boys finds focus on the complicated minefield of growing up. Each of the boys is going through a change…

Max (Jacob Tremblay) is the cherubic apple of his father’s eye (the ever-dependable Will Forte). Even when he walks in on Max about to have some ‘alone time’ with a video game avatar he’s given comically gigantic proportions, his dad finds an opportunity for a Kodak Moment as if Max had just lost his first tooth. Self-confessed rule-lover and genuine good boy Lucas (Keith L. Williams, the funniest of the trio) can’t believe his luck with his vegetarian lasagne and orange soda for dinner—but it turns out they’re a cushion to the blow of his parents’ (Rhetta and Lil Rel Howery) freshly announced divorce. Meanwhile, talented singer Thor (Brady Noon) is considering giving up his passion for something less “try-hard”, as he phrases it.

The three kids—collectively naming themselves the beanbag boys because… well, they own beanbags—have the sort of close-knit friendship that only really prospers when you’re 12 and don’t have to worry yet about jobs, money, or relationships.

The young stars have great chemistry and bounce off each other with boundless energy and expert comic timing. There are a lot of laughs found in the innocent misunderstandings of youth, courtesy of some perfectly delivered lines. “She’s a nymphomaniac. That means she has sex on land and on water,” explains Max at one point. It’s a funny line that’s made so much sharper by Tremblay’s earnest, wide-eyed delivery.

Though they’re a lot funnier than real tweens, there’s something refreshing in how genuine and realistic these kids feel. Throw-away moments like Lucas and Thor dancing at the cafeteria table (for apparently no reason), or Max holding his finger-gun up as a legitimate warning not to mess with him, are perfectly observed and sweetly funny.

It’s a cynical trend in modern comedy to write the young as overly-savvy little brats, a sort of “kids today!” eye-roll that places a writer’s smug generational superiority over good character writing. These kids are an antidote to this problem because Lee Eisenberg and Gene Stupnitsky’s screenplay imbues them with a warmth and humanity that allows for consistent payoffs. Lucas’s “I respect women! My mom is my best friend!” line is funny but not mocking—these genuinely are good boys.

They’re the type of good-natured but realistically crude adventurer kids who, in a more tragi-comic story, would find themselves setting out to find a rumoured dead body. But in the context of a modern and broad comedy, it’s a lost drone that they’re on the hunt for. The drone, belonging to Max’s dad, is confiscated by teenagers Hannah (Molly Gordon) and Lilly (Midori Francis) after the boys crash it onto their property while attempting to spy on them. They’ve been invited to a kissing-party and want all the tips they can get.

The problems with Good Boys become a little more apparent as this plot kicks in and the set-pieces arrive at regular intervals. Its one-crazy-day premise is overly-familiar; a plot mechanic that’s relied on a little too much in modern comedies. The escalating chain-of-events design in Good Boys sometimes obscures motivation, inviting that oft-asked question in comedy: ‘wait, why are they doing this again?’

It’s not helped that one or two of the set-pieces are distractingly loud and generically slapstick. Though nearly all sequences have a generous amount of laughs, some feel underdeveloped and half-baked—like a scene where Lucas dislocates his arm after an intense chase sequence. The kids do their best, but such broad moments of comedy—while fleetingly funny—fly a bit too far away from the character and dialogue-based humour that’s the movie’s strength.

By the time the drone storyline resolves itself, it’s also quite apparent that the film’s pacing and structure are imbalanced. The smaller-scale third act is at odds with the second act’s zaniness, and by the time it reaches its coda it feels somewhat like the middle portion of the film had little bearing on the outcome. It’s an issue that reoccurs with episodic comedies, but many have done it worse than Good Boys. If the film succeeds in keeping these disparate parts together, it does so with a through-line of heart and one-liners, which are consistent throughout.

After spending some time in a frat-house (“Guys! She dropped the charges!” as a non-sequitur dropped by a frat-bro is one of the darkest and best laughs of the film) which devolves, naturally, into a chaotic paintball gunfight, the three find themselves arguing to the point of hysterical childhood tears. It’s been the wild and tense kind of day that makes you question your friend’s choices. It’s oddly affecting seeing the boys crying over an argument, but funny in its accuracy—particularly the reveal that going their own separate ways for them means walking a few paces away from each other down the same street. 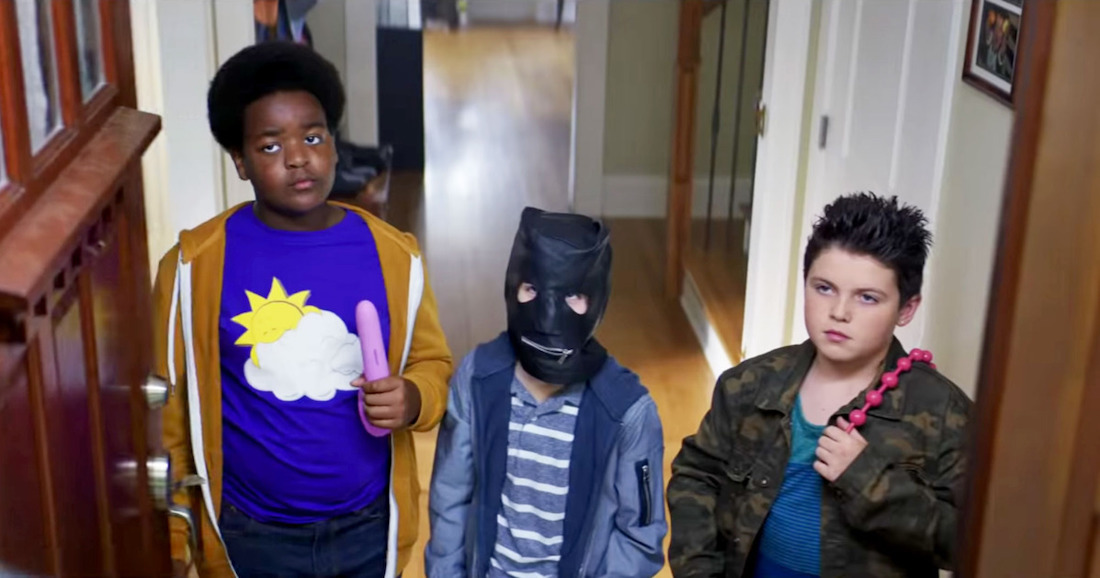 Though a tad predictable, the film’s ending is touching in its frankness. Like Seth and Evan’s moving goodbye in Superbad as they head off, possibly out of each other’s lives, the Beanbag Boys are growing up and apart. Max has had his first kiss. Thor has taken four sips of beer (which is the record). Lucas has his new friends with the anti-bullying group. An awkward get-together at a party between the three is hilarious and note-perfect, played exactly like three old college buddies meeting up after 10 years and wondering if there’s still a viable friendship there. It’s funny, but it’s also emblematic of the weight given to these boys and their feelings, totally without mockery.

Director Gene Stupnitsky allows for moments of uninterrupted sweetness but is always quick to follow it with a great joke. “Shut up! Everyone knows your Mom plagiarised her cookbook!” shouts Max after bully Atticus (Chance Hurtsfield) mocks Thor, a scene emotionally well-played and punctuated with the perfect line. And that’s where everything pays off. Though the plotting might be a bit contrived and the story overfamiliar, Good Boys succeeds on the strength of these moments and its deft blending of jokes and sentiment.

It’s also the sort of comedy that grows in estimation as you recollect tiny moments that are swept into the densely packed layers of jokes. Stephen Merchant’s cameo is a highlight (“you look more like a paedophile than anyone I’ve ever seen”, the boys tell him), while a bit of drug-induced wisdom-imparting from Hannah and Lilly to Thor and Lucas is as ridiculous as it is lovely.

There’s a sharpness to these scenes which counterbalances the exhaustingly loose improv-style so prevalent in modern comedies. With solid joke writing, lively performances, and an endearing friendship at its core, Good Boys is a hugely likeable and legitimately funny comedy that earns its title. 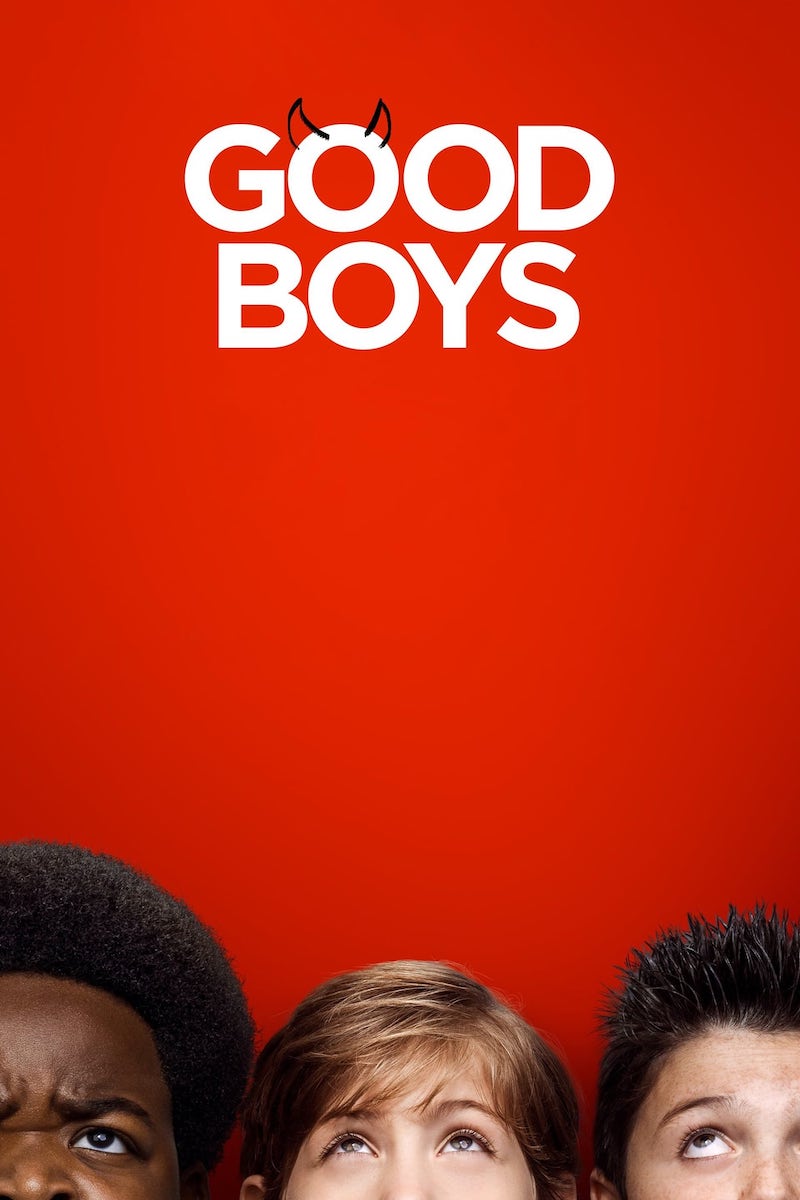