Audiences have been staring into Charlie Brooker’s Black Mirror for five years, incredibly, but the Channel 4 anthology had only produced six episodes and a Christmas special before its long-awaited transfer to Netflix. This has been both a pro and con for the show, because it’s had enough time to ensure a high-quality of storytelling, but hasn’t been able to capitalise on its success because most series are over before they’ve really begun.

The latter issue is something Netflix perhaps felt more keenly than its native British audience (who are used to TV shows delivering so little over so long). After Black Mirror became an unexpected hit for Netflix in the US, it prompted them to seize the rights from Channel 4 and produce an expanded six-episode run. Fans of Black Mirror will be delighted their favourite show has almost doubled its number of installments overnight.

The genius of Black Mirror was welding Twilight Zone-style stories to the acerbic wit of its satirist creator Brooker, who looked through a very particular prism that affects everyone’s lives in today’s world: technology. The ‘black mirror’ of the title refers, of course, to the dark but reflective screen of most televisions, phones, computer monitors, and tablets. Most episodes are built around an idea where technology’s been taken to a frightening extreme, in an imaginary tomorrow or alternate today. Or if technology’s not the boogieman, specifically, then it’s an element of modern society or culture that’s being twisted and warped into an alarming shape by unhealthy trends or desires.

Netflix is a perfect partner for Black Mirror, but also an ironic one. As an online streaming service that’s allegedly commissioned TV shows based on a taste algorithm of subscribers, Netflix already sounds like a starting point for an episode of the show! I’m a little annoyed the VOD behemoth has dumped six new episodes on us, however, as part of the fun with Black Mirror has been discussing the show in the days between the next installment. Now, we face the common problem of dodging spoilers online, if we don’t feel like bingeing series 3 in a weekend. 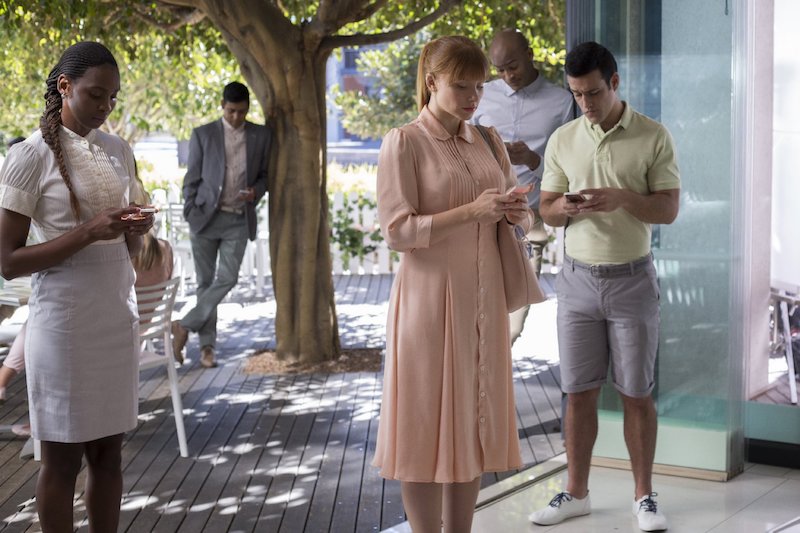 The first episode of the new series is “Nosedive”, directed by Joe Wright (Atonement, Hanna), from an idea by Charlie Brooker, but with a script credited to Parks and Recreation actress Rashida Jones and writer Michael Schur. Interesting, they’re the only writers since Peep Show’s Jesse Armstrong in series 1 (who wrote “The Entire History of Me”) who’ve been entrusted with an episode of their own, and also come from a comedy background.

It’s a triumph. A masterpiece.

Lacie Pound (Bryce Dallas Howard) is an agreeable flame-haired young woman, living in a sunny world of pastel-coloured clothes and houses, where life appears to be idyllic and populated by friendly people. Unfortunately, below the surface is nothing but lies, duplicity, and festering resentment. The reason is that everyone, Lacie included, are obsessed with ranking each other and their daily interactions with a ranking from 1 to 5 stars. They do this using phones that rarely leave anyone’s grip, aided by high-tech contact lenses that provide an augmented-reality of information about each person and their current ranking.

Unfortunately, society appears to have adopted ranking as a cornerstone of how the world now works, so those with a low ranking lead an unremarkable life with few privileges and perks, while those with a high ranking enjoy blessed lifestyles and advantages.

The trade-off, of course, is that people like Lacie (with an approval score of 4.2) are condemned to behave in a false manner, to curry favour with others to improve their lot in life. The story of “Nosedive” truly begins when Lacie, who lives with her mid-ranking brother Ryan (James Norton), realises she can only afford her dream home with a 20% saving available to those with a 4.5+ ranking. Consequently, she goes on a charm offensive, which comes to involve reconnecting with her childhood friend Naomi (Alice Eve), a beautiful woman with a 4.8 score, who’s about to get married. It works, and Lacie’s offered the chance to be Naomi’s matron of honour, to deliver a speech to hundreds of people in the high-four category, which would undoubtedly fast-track her to a better life. But when Lacie’s flight to the wedding gets canceled and she loses her temper at the airport, her life starts to unravel, her mask starts to slip, and her ranking consequently dips, leading to all manner of difficulties reaching Naomi’s nuptials… but also a rare opportunity to learn more about herself and the ordinary people she meets. 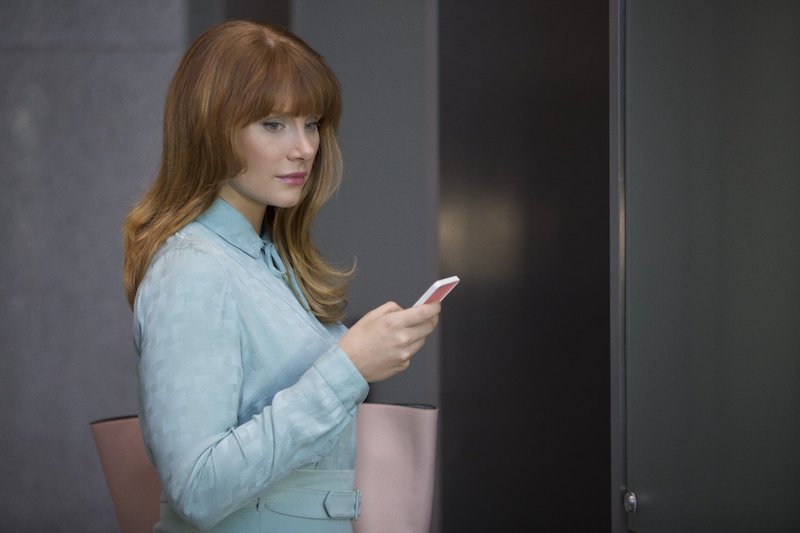 I adored this episode. The idea isn’t completely fresh (Community did something very similar with “App Development and Condiments”), but the execution was sublime. The first half was dedicated to exploring this off-kilter world, and it was a treat to see just how plausible much of it seemed. The production design alone was worth watching this story for, being the kind of future one could imagine existing. The ranking system is, of course, an idea that exists today taken to an extreme, but we all know the feeling of seeing something you post to Facebook or Twitter failing to achieve many ‘Likes’ or ‘Retweets’ and how that can give you a depressed feeling. It’s not entirely ridiculous to imagine this technology of “Nosedive” coming about, to encourage positive behaviour in a population, and the nasty places that might lead.

Bryce Dallas Howard was the standout, ensuring the episode wasn’t just a soulless ‘what if?’ story. It was genuinely painful to see how Lacie went about her day, griping her phone, absorbing people’s social media feeds, unable to behave authentically because it could lead to down-votes. She’s a kind and lovely person, but technology’s brainwashed her to behave a certain way and strained the relationship she once had with her brother (who refused to buy into the ranking system).

What was nice about “Nosedive” (perhaps because it was written by Americans?), is that this episode didn’t go for the bleak ending that’s come to characterise installments of Black Mirror. Without spoiling too much about the conclusion, Lacie ends up rock bottom but with a newfound freedom to say and do whatever she pleases, unshackled from the tech that’s been steering her social life. It was easily the most upbeat Black Mirror yet, but that’s not to say there wasn’t a lot of emotional agony and frustration baked into Lacie’s overnight road trip adventure. But you were with her every step of the way, intrigued to see how she’ll adapt to the problems thrown her way, and if her speech at Naomi’s wedding will even go ahead and be received well. The world doesn’t change at the end of “Nosedive” (how could it?), but Lacie emerges a better and more honest person.

It’s genuinely hard to pick fault with “Nosedive”. The concept was great and perfect material for Black Mirror, Bryce Dallas Howard was a delight, Alice Evans provided some great support as a woman enslaved to the ranking system (but who was once a real friend to Lacie when they were kids, which added a layer of deeper tragedy about their current relationship), Joe Wright’s direction was very strong, and the sets and scenery looked incredible. You could easily believe this was a movie at times. The only mild complaint I have is that a full hour, without commercial breaks, was perhaps too much. I think “Nosedive” would have benefitted from being a quarter-hour shorter, or the setup handled quicker before Lacie’s plans started to go awry, but tolerances will vary there. The main thing is this was a confident and engrossing start to Black Mirror’s third series; a slightly more Americanised worldview, with higher production values, but a story that’s lost none of its intellectual rigour and satirical bite.