Charlie Brooker gets back behind his laptop to write this second episode of Black Mirror‘s third series, “Playtest”, directed by Dan Trachtenberg (10 Cloverfield Lane), a new filmmaker who earned interest through his impressive fan film Portal: No Escape, based on the popular video game. Brooker himself has a background in gaming journalism, so it’s the ideal partnership for an episode that combined survival horror with augmented reality.

Cooper (Wyatt Russell) is an American backpacker who’s finally moved out of his mother’s house, to see the world and experience new things following the untimely death of his father from Alzheimer’s. While enjoying the final leg of his global trip in the UK, he meets a beautiful Londoner called Sonja (Hannah John-Kamen), before a financial disaster puts the kibosh on him flying home anytime soon. To help, Sonja recommends Cooper raise funds by becoming a guinea pig for SaitoGemu, a cutting-edge video games company, and it’s not long before the affable Yank’s arriving at a country pile to meet with tech assistant Katie (Wunmi Mosaku) and enigmatic Japanese CEO Shou (Ken Yamamura).

After this setup, the real fun begins, as Cooper agrees to trial a new form of augmented reality that involves getting a device implanted at the nape of his neck. Cooper consequently finds that his brain’s capable of producing lifelike audio-visual hallucinations to play interactive video games — but what starts as innocuous fun with a tabletop version of Whac-a-Mole, takes an altogether scarier turn when Cooper’s asked to spend the night in a spooky neighbouring mansion. After settling in for the night amongst the old books and cobwebs, Cooper soon realises he’s underestimated the nightmarishly realistic experience his subconscious is able to deliver. 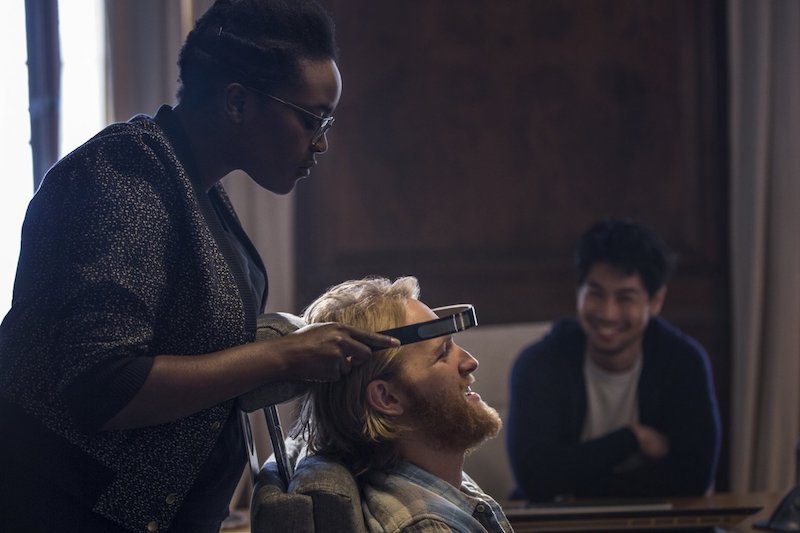 After the premiere’s intellectual depth and sophisticated storytelling, “Playtest” is far more of a straightforward crowd-pleaser with simpler intentions. It’s a haunted house story for the digital age, given a Black Mirror twist that delivers a twist on The Cabin in the Woods taking place entirely inside the imagination of one player. The idea behind this episode is a great deal of fun, and Russell ensures his character behaves realistically to every freaky encounter, so you can really put yourself in his shoes as the tension rises and the night becomes a living nightmare. The gradual buildup is also expertly handled by Brooker, beginning with an “invisible spider” crawling across the carpet, before escalating to creepy “holograms” of childhood bullies, and tearing the face off a knife-wielding attacker to expose a skull lathered in crimson blood.

This would have made a really good movie, actually. There are some restrictions with what the story could achieve in just under an hour, so I was slightly disappointed we didn’t get more of an onslaught of horrifying things to drive Cooper nuts, but what we did pushed the story towards an enjoyable conclusion of fake-out endings. For awhile, I was beginning to wonder of series 3 of Black Mirror’s in danger of being characterised by its optimistic endings, but Brooker manages to steer things around to a depressing resolution of Cooper’s backpacking journey… which was oddly comforting, given the show’s history.

As we’re entering the era of commercially available virtual reality, the timing of “Playtest” couldn’t be better. I have a strange the gaming industry is heading towards this Matrix-esque idea of plugging brains directly into a piece of software and having our own biological supercomputers drive unique experiences. Give it a century to happen, perhaps, but one day a generation may look back at “Playtest” as a warning from historical fiction about the dangers of linking man and machine for entertainment purposes.

That said, even after heeding Black Mirror’s warning, I’d play that Whac-a-Mole game. Wouldn’t you?

Our coverage of Black Mirror will continue, episodically, with different writers taking on each episode, in the near future. Stay tuned…