Throughout “The Wrath of the Lamb”, there were moments that anticipated the finality of this episode’s last scene and, by extension, the end of the show itself. Bryan Fuller has said that each season’s finale was also crafted to serve as a series finale in the event Hannibal wasn’t picked up for another season. But while it would have been maddening for the show to end with Will (Hugh Dancy) in a jail cell, or Hannibal (Mads Mikkelsen) and Bedelia (Gillian Anderson) departing for Europe, the bloody ménage à trois that closes season three serves as a fitting conclusion to both the show’s take on Red Dragon and Will Graham and Hannibal Lecter’s story. I’m still holding out hope that we haven’t seen the last of Hannibal, but if this is indeed the end, it feels right. 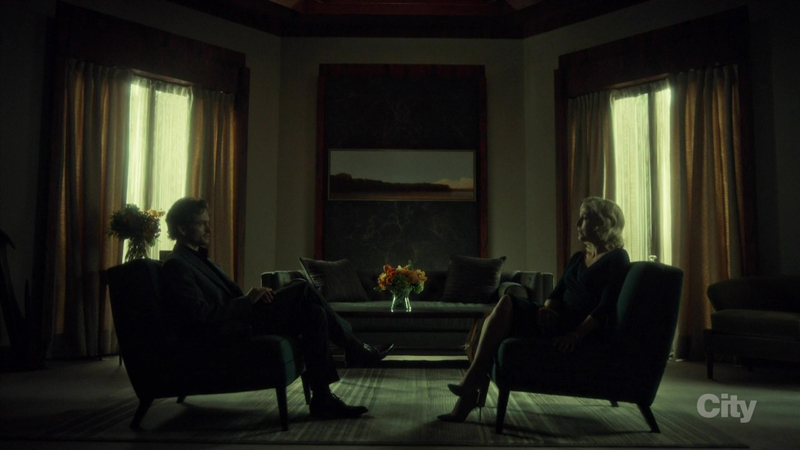 First, though, the episode wraps up one of the most important aspects of the novel: the doomed relationship between Francis Dolarhyde (Richard Armitage) and Reba McClane (Rutina Wesley). After Francis fakes his own death, allowing Reba to escape, Will visits her in the hospital. I was hoping the show would tackle this scene, as Manhunter skipped it and Red Dragon completely botched it—if there’s one scene that exemplifies everything Brett Ratner didn’t get about this story or the characters his cast had created, it’s that one. Thankfully, Fuller and episode co-writers Steve Lightfoot and Nick Antosca stay close to the scene as written by Harris, while still finding subtle ways to underline how Reba and Will have become thematic counterparts in their version of the Red Dragon arc. It’s a pleasure to watch Wesley and Dancy play off of each other, and the scene serves as a reminder that, like Reba, Will is the dependent in his own unusually toxic romance.

In the novel’s climax, Dolarhyde returns to attack Will and his family at their home, but after the excellent home invasion sequence a few episodes ago, I assumed Fuller had something else in mind. The episode’s endgame is set into motion when Dolarhyde attacks Will in his motel room; instead of killing him, Francis wants Will’s help in getting close enough to Lecter to kill him for his betrayal of Dolarhyde. It’s a bit of a stretch as far as character motivations go, as is Jack (Laurence Fishburne) and Alana (Caroline Dhavernas) agreeing to Will’s plan to fake Lecter’s escape, but I can forgive it. As the show’s never been interested in procedural details, it’s hilarious how, when Will describes to Lecter how the plan will work (“Secret Service has a setup they’ve never used”), Hannibal points out Will’s lack of conviction. The plotting here soon proves to be a simple pretense to bring Hannibal and Will together after Will has finally outwitted Hannibal for once (giving Mikkelsen the chance to deliver the line “You dropped the mic, Will”—thank you for that, Bryan Fuller). “The Wrath of the Lamb” underlines the truth that, no matter how hard they try, Will and Hannibal can’t rid themselves of the “inconvenient” affection they feel for each other. For better or worse, they’re meant to be. 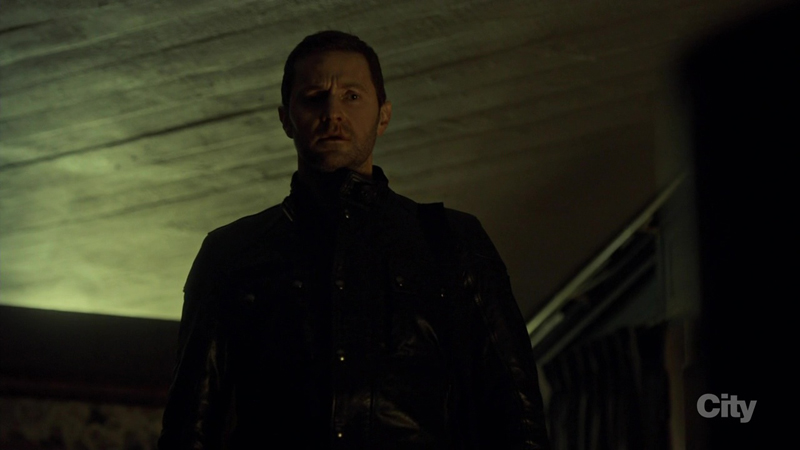 While many of the series’ core cast of characters have scenes that could serve as fitting sendoffs (I particularly enjoyed Price and Zeller’s hilariously crass recap of Dolarhyde’s faked suicide), the episode’s final act narrows its focus to the three key players. Dolarhyde violently interrupts the FBI’s plan before it begin (shame we’ll never see the Secret Service’s new setup), allowing Will and Hannibal to escape to Lecter’s seaside hideaway. The final confrontation between the three men is perfect, both meticulously crafted—I particularly loved the abrupt cut from Will and Hannibal’s vision of Francis as the dragon to the objective shot of Dolarlyde collapsing in a pool of blood—and the ideal narrative and thematic conclusion to the series.

While last season’s finale was emotionally devastating, the bloody brawl between Dolarhyde, Hannibal and Will is perversely exhilarating, and not just because it’s scored by an original song by Siouxsie Sioux (!!!) that sounds an awfully lot like Hannibal‘s version of a Bond theme. Though Will is justified in killing Dolarhyde, this is the first time he and Hannibal have worked together, and the experience is unmistakably a pleasurable one for Will. The whole thing is even staged like a sex scene, with an emphasis on penetration and beautifully composed ejaculations of blood, ending with Will and Hannibal physically spent and resting in each others’ arms. In an interview for Vulture, Fuller flat-out described the scene as a threeway, with Dolarhyde as the third: “Pick him up at a bar and he leaves and then you go to sleep together in each other’s arms at the bottom of the sea or wherever that may be.” Will and Hannibal have finally consummated their relationship, if not quite as literally as some fans had hoped—I’ll admit that, when they embraced, in my head I was yelling, “Make out already! Just do it! You’re right there!” 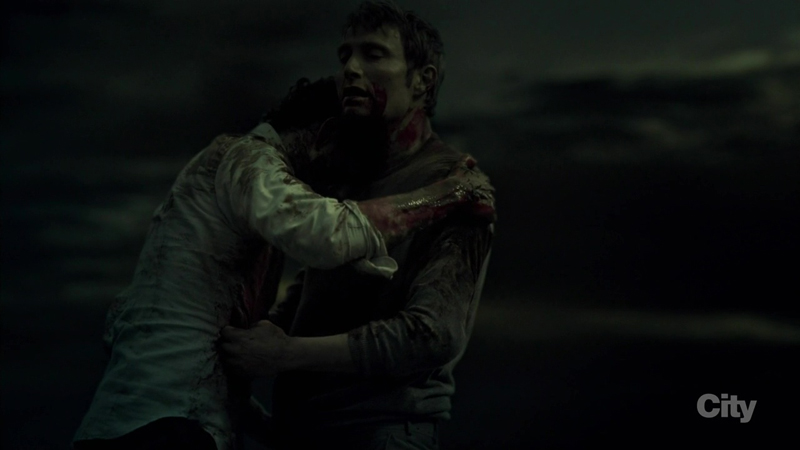 To be fair, Fuller was probably wiser to go in the direction he did. Though I wouldn’t be complaining if the series had ended with blood-drenched Hannibal and Will 69-ing on a bluff, (“it really does look black in the moonlight”), the episode’s final moments allow Will to retain some semblance of his better self. After admitting to Hannibal that their teaming up to kill Dolarhyde was “beautiful”, Will pulls them both over the edge of the bluff, choosing to end both of their lives rather than live as Hannibal Lecter’s murder husband. If Will is indeed dead, it’s as noble a finish as he could hope for at this point, and a perfect image to close Hannibal and Will’s bad romance.

Of course, it remains to be seen if this is truly the end for either character, as the post-credits scene with Bedelia—one that has been bizarrely misinterpreted by other writers as an act of self-mutilation on Bedelia’s part—leaves two unoccupied place settings at the dinner table. I’m hopeful that we haven’t seen the last of Hannibal, especially if we eventually get a Fire Walk With Me-style movie that’s weirder, artier and even more alienating to general audiences. If this is it, though, I’m thankful we got three seasons of a show that, in its last year, only became stranger, more perverse, more committed to its artsy, idiosyncratic digressions—in every way, more defiantly itself. So for now, perhaps it’s best to appreciate that Hannibal somehow exists in this form and not worry about its future.

As Hannibal puts it, “You know, Will, you worry too much. You’d be much more comfortable if you relaxed with yourself.”