One of the things I like most about You, Me and the Apocalypse is the way the story’s slowly deepening every week. In episode three, we’re introduced a couple of big twists, which all felt earned, as well as giving us a great cameo (hello there, Nick Offerman—I would watch you in anything), which all helped us learn more about the major pairings. And all this in the space of an hour—nice going Iain Hollands. This was economical, smart storytelling, and now the series is shaping up to be a very clever show. 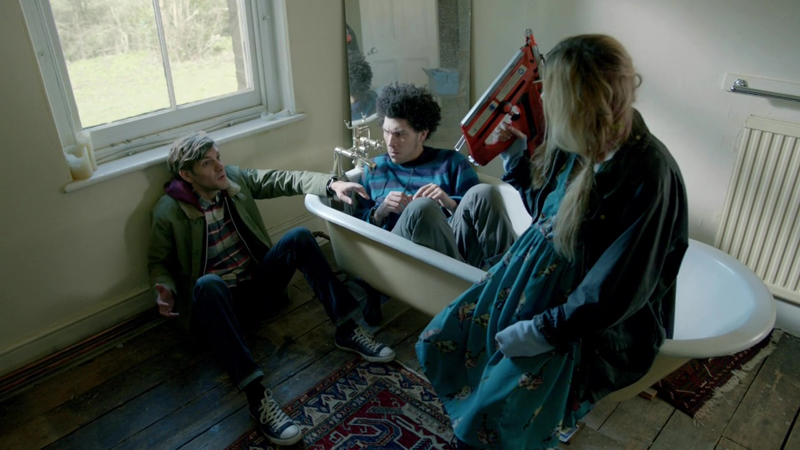 Our nominal heroes learnt a little more about Jamie’s (Mathew Baynton) background this week, and rather a lot more about how babies are born as Skye (Fiona Button) went into labour, putting paid to her plans to torment the man she’d mistaken for bad boy hacker Ariel (Baynton again). It turns out that when not threatening people with pliers, Skye’s a rather sweet girl who just had the misfortune to grow up on a commune with Ariel and fall in love with him, only for him to run off with her best friend. That sort of thing can easily lead a girl to thoughts of ‘revenge served as cold and unpleasantly as possible’. Luckily, Jamie managed to convince Skye he was who he claimed to be, largely by the simple act of being a pleasant human being prepared to help her through a difficult child birth. Dave (Joel Fry), meanwhile, proved to be all talk and no action once he realised what delivering a baby actually involved; although his positive mental attitude is definitely growing on me with each passing week. The episode ended with the guys heading off to the Highlands of Scotland, following Skye’s revelation that Jamie’s mum Mary was institutionalised there. Will they find all their answers up north? I very much doubt it, but I’m enjoying their ramble around the British Isles. 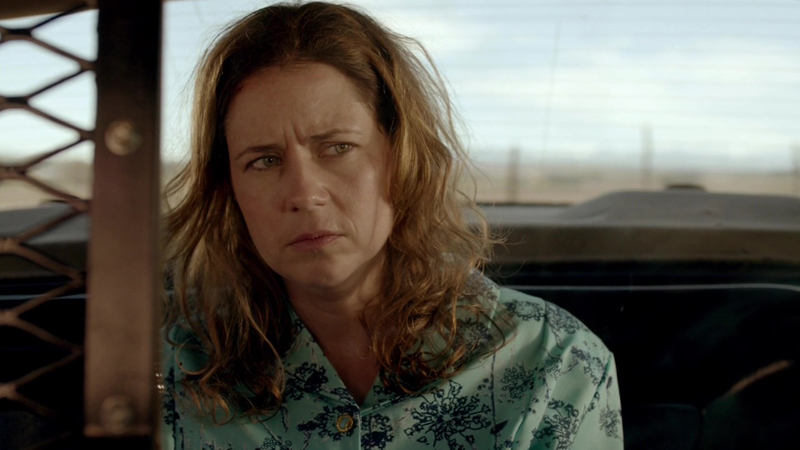 Mild-mannered librarian Rhonda (Jenna Fischer) was the beneficiary of this week’s best scene, thanks to Parks & Recreation guest star Nick Offerman, who popped up as lonely cross-dressing farmer Buddy. The scene where Buddy confessed his secret to Rhonda, saying “would you mind if I got changed, for once in my life I would like to be myself” was poignant, heart-breaking and very funny, in addition to being a masterclass in how to steal a scene. Unfortunately for poor Rhonda, the alternative reality where she and Buddy hung out on the sofa exchanging clothing tips was just a dream, and thus she ended the hour back where she started: on the run with fugitive Leanne (Megan Mullally), only this time getting to pretend she’s a cop, which might keep them one step ahead of the law. Not that staying free is necessarily going to help our hapless heroine, given that Ariel’s already met up with her son Spike (Fabian McCallum); who, faced with the choice of spending another second with his useless biological father, or going on the run with a lawless hacker, plumped swiftly for the latter. Oh Spike, I know it was a ‘devil and the deep blue sea’ moment but it could still be a choice you live to regret. 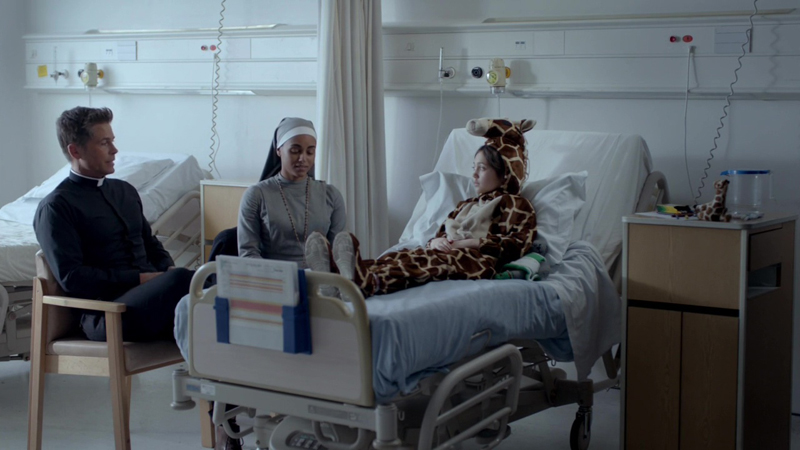 The myth-busting duo headed to Warsaw, Poland, this week to check out a bunch of fanatics who believed a little English girl in a giraffe costume had come back from the dead and is thus the new Messiah. So far, so ludicrous right? Well, hold fire, because in the first of the week’s big revelations it turned out that little “Jane Doe” could indeed see the future and might well be the Second Coming; not that Sister Celine (Gaia Scodellaro) is going to let anyone know that any time soon. That was only the first in a series of shocks, however, as it turned out the little girl’s mother was none other than Jamie’s missing wife Layla (Karla Crome). Furthermore, Jane’s age and the fact she claimed her daddy works in a bank suggests she’s definitely Jamie’s daughter, not that he knows this. Final revelation: Layla was clearly on the run from Ariel, whom she was last spotted with in Russia, when she and her daughter crashed their car in Poland. Very interesting information all round. 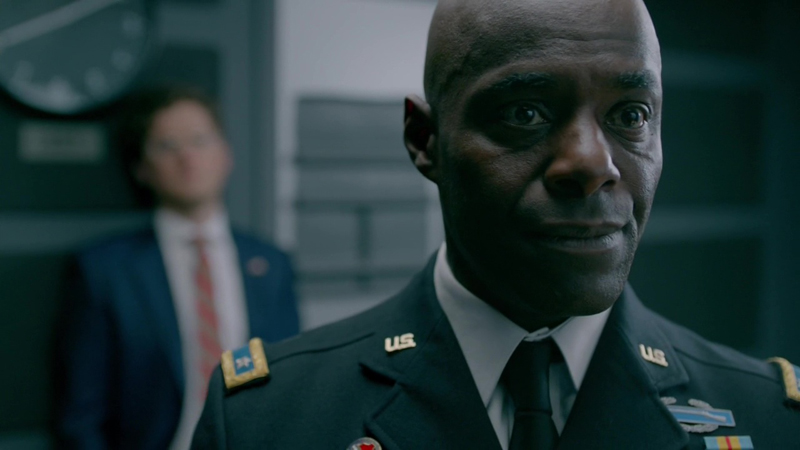 The revelations weren’t over yet, as it turned out that the seemingly straight-laced General Gaines (Paterson Joseph) is actually in a relationship with Scotty (Kyle Soller), but their workplace romance is being conducted in secret. Oh, and there’s also a plan beyond the plan which we’re no doubt going to learn about soon—but, personally I was most won over by Gaines’s fatalistic take on the apocalypse: “it’s not as though we’ll benefit, we’ve just got the burden of knowledge.” Scotty looked less convinced. 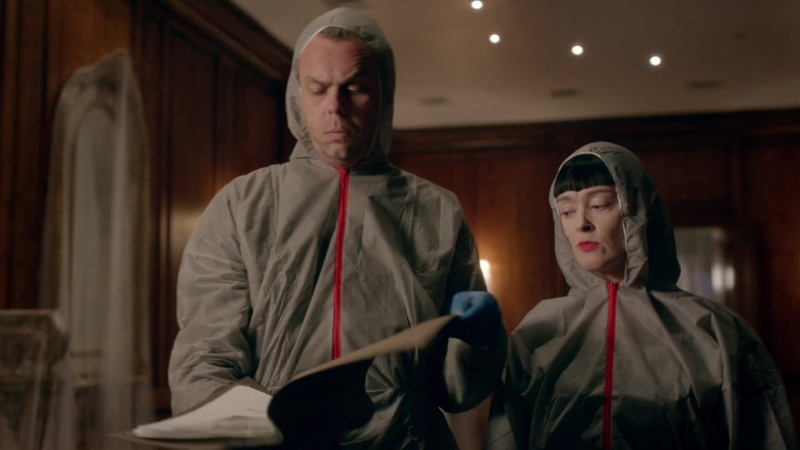 In a week heavy with big revelations, Hollands saved one final for the end as we were introduced to a pair of nameless agents who appear to be employed by an oxygen-guzzling Diana Rigg (The Avengers, Game of Thrones). For what nefarious purpose is unclear right now, but they were given case files of all the main characters and sent off on a mission. Hmm, somehow I think there’s more than just your everyday apocalypse going on here… 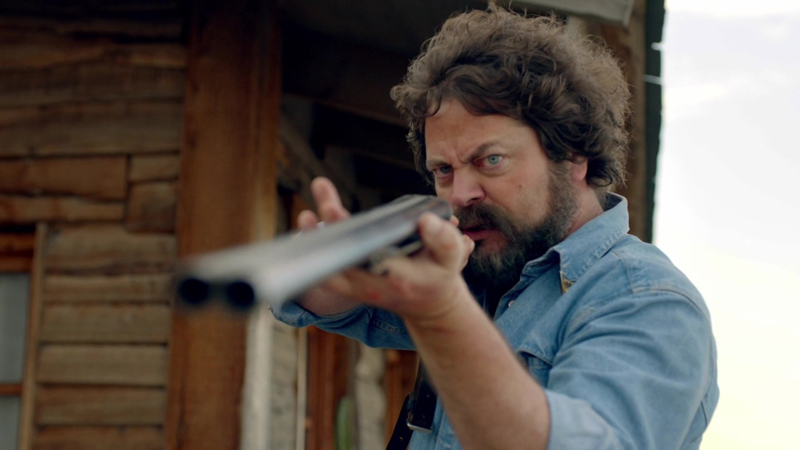 So what did you think? Are you enjoying the twists and turns? What does Diana Rigg’s character want? Will Jamie and Dave find any answers on their road trip across the UK? And finally, if pressed how would you describe Rob Lowe? As ever all speculation welcome below…