In the first two (and best) seasons of American Horror Story, there’s a point in the first few episodes where the disparate, seemingly haphazard plot threads come together in a way that brings the season into sharp focus. It’s not that the narrative suddenly coheres—AHS isn’t interested in that—but the thematic connections driving the season begin to reveal themselves in ways that suggest there’s more of a method to the show’s madness than it seems. I’m still hopeful Hotel will take a similar turn soon, and I’ll look back on its first episodes more fondly. As of now, though, the show has begun to offer glimpses at the big picture, and I still feel lost. While there are plenty of moments that are entertaining in isolation, I can’t seem to get invested in it on more than a moment-by-moment basis.

This week’s episode, “Chutes and Ladders”, written by Tim Minear, devoted considerable time to the origins of the Hotel Cortez, as related by Iris (Kathy Bates) to Detective John Lowe (Wes Bentley). In black-and-white flashbacks, we’re introduced to James Francis March (Evan Peters), the oil tycoon who built the hotel in the 1920s. March is American Horror Story’s riff on real-life serial killer H.H. Holmes, though Holmes was active earlier, in the 1890s. Like Holmes, though, March built his hotel—with its dead ends, hidden chutes for disposing dead bodies, and secret torture chambers—as his own personal murder and torture playground. Peters is one of the show’s most dependable performers—he and Sarah Paulson usually manage to make even the most half-baked scenario emotionally credible—and it’s fun watching him get to play a villain here, especially one with an old time-y accent. “Murder is the bee’s knees! Straight-up murder, all the way, see?” That’s not one of March’s lines this episode, but I’m hopeful that it will be before the season is through. 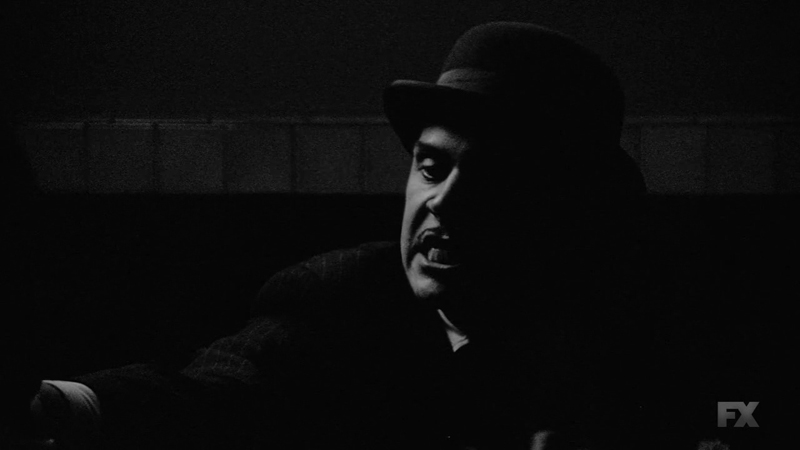 March killed himself and his adoring maid and accomplice, Miss Evers (Mare Winningham), and both have been haunting the Cortez ever since. He also left behind a wife, whose identity has only been hinted at, but it’s almost definitely the Countess (Lady Gaga). The episode is heavy with exposition establishing this backstory and starting to connect the characters together, which may be why it feels so lumbering, as long exposition dumps are punctuated by occasionally creepy but mostly context-free jolts like Hypodermic Sally (Paulson) suddenly losing her teeth, leaving her mouth a bloody mess.

Other characters, particularly Lowe (who realised the killer he’s pursuing is mimicking the Ten Commandments, because we’ve wandered into any number of post-Seven unmade screenplays), and his family, are still orbiting the main narrative. We know that Lowe and his wife (Chloe Sevigny) are tortured over his missing son, Holden, that their daughter Scarlett (Shree Crooks) found Holden (Lennon Henry) in the Countess’ vampire daycare, and that Lowe, a recovering alcoholic, may have checked into the Cortez to get lost as much as he did to solve the case. If this were any other show, I’d assume it was taking a slow burn approach to Lowe’s possible breakdown, but since this is American Horror Story they’re probably building to something like “Lowe was the killer all along!”. I wish they’d just get on with it. It’s a shame things are off to such a scattershot start, as director Bradley Buecker actually does a great job with both the big scares and the dialogue-heavy scenes between Bentley, Paulson, and Bates. 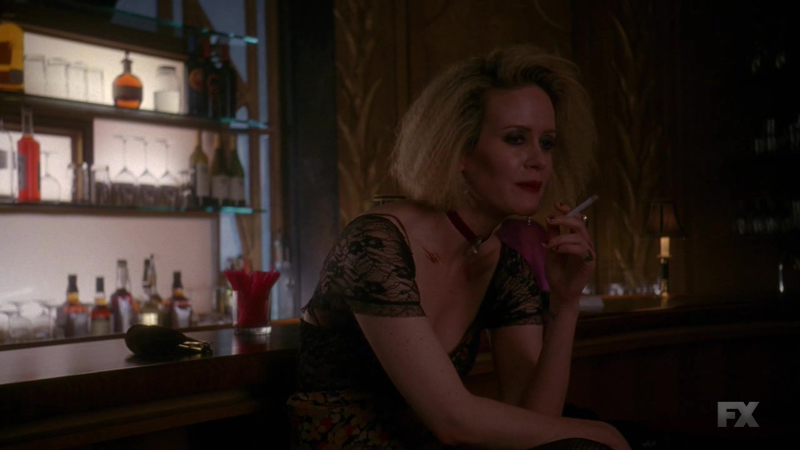 As with last week, the scenes involving the Countess were the highlight, even as the show’s loving homage to The Hunger is almost a remake at this point. I don’t have much interest in ultra-chic non-vampires lounging around and striking evocative poses, but when the non-vampires are played by Lady Gaga, Matt Bomer and new recruit Finn Wittrock, it’s a lot more fun than it probably should be. The Countess jilts Donovan (Matt Bomer) in favour of vapid model Tristan (Wittrock), who was a part of a fashion show in the hotel organised by the new owner and fashion guru Will Drake (Cheyenne Jackson), because why not?

It’s fun to watch the Countess and Tristan off a bearded hipster Tristan found on Grindr; and it’s even more fun, as the Countess waxes rhapsodic about the late ’70s, to see Gaga recreate Bianca Jagger’s famous entrance on horseback at Studio 54. Whether or not the Countess’s story amounts to more, it’s shamelessly sleazy in a way I can hang with. Creator Ryan Murphy’s teased that the next few episodes focus on the Countess’ crazy backstory, and if he and the show’s writers find a way to make it resonate more deeply, this could prove to be as canny a bit of rock star casting as David Bowie in The Hunger. In the meantime, at least the soundtrack—which included New Order, Siouxsie and the Banshees and Bryan Ferry this week—is spot-on.

Written By
Andrew Bemis
More from Andrew Bemis
After last week’s somewhat frustrating episode, it was good to find Hannibal back on...
Read More