Watching You, Me & The Apocalypse this week it occurred to me that what I love about this show is its humanity. It’s a drama suffused with a desperate yearning for human connection; stuffed full of characters who are all in some way lonely and desperately trying to reach out. That’s the reason its premise works so well, because with the end of the world fast approaching what else would you want but to spend those last seconds with someone you love? It’s why characters continue to make connections in the oddest of places and at the strangest of moments—and, because of that, despite the surreal scenes and madcap plotting, this is a very warm show and one that can feel surprisingly real. 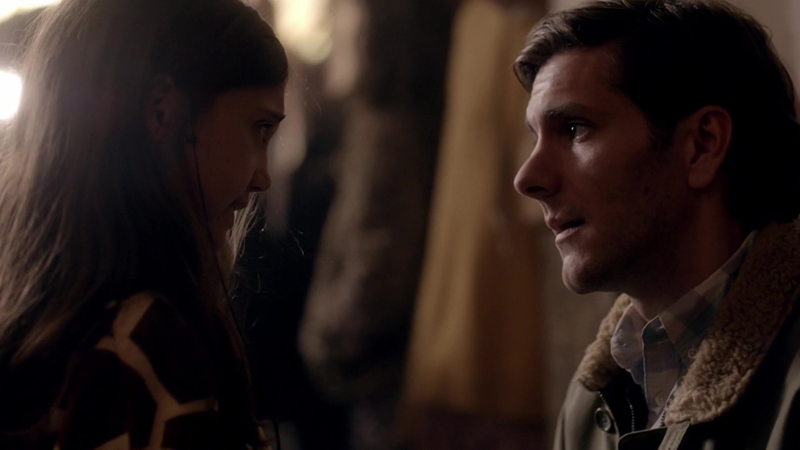 Jamie (Mathew Baynton) finally tracked down his long-absent wife this week and learnt the truth of how she came to marry him, having previously married his twin brother. And what a sorry tale it was. It turns out that Ariel, not exactly well-adjusted at the best of times, grew up hating Jamie because their mother Mary spent the whole time talking about how perfect and ‘chosen’ he was. Rather than work through these issues calmly, our evil genius decided instead to create a Truman Show–esque real life game called Doofus, with Jamie as the hapless protagonist. Cue faked A-Level results, no university offers, and worst of all the creation of an imaginary girlfriend called Layla—played by Ariel’s own girlfriend, the rebellious teenage Hawkwind, who’d grown up with him in the commune and hated it almost as much as he did. Poor Jamie, just when you think things couldn’t get any worse, he discovers his whole life’s been not just a lie but a giant game—with himself as the hapless fool caught in the middle. I wouldn’t bank on him forgiving Hawkwind any time soon (even though I did believe her when she said that being Layla and meeting Jamie was the best thing that ever happened to her), but on the plus side at least he has the lovely, prophetic, Dave-attacking daughter Frankie to catch up with… 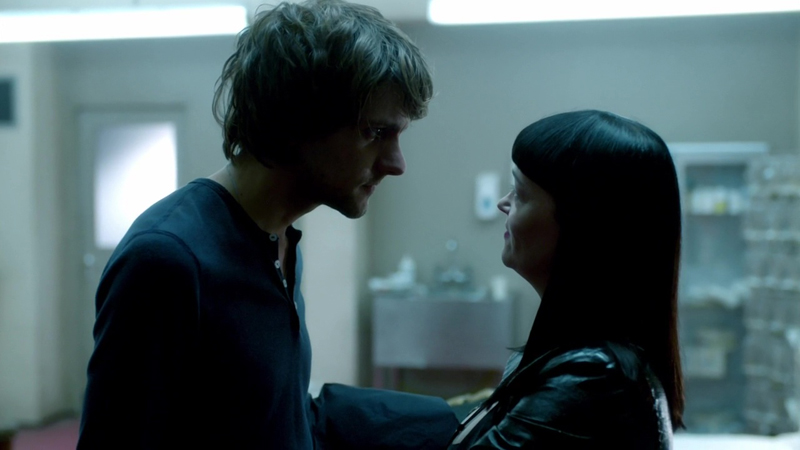 Or rather, make that “at least [Jamie] had“—because the encroaching end of the world has clearly sharpened Ariel’s mind somewhat, allowing him to concoct a reasonably coherent plan in which he bashed Dave’s (Joel Fry) eye in with a hammer (an impressively gruesome touch which made it clear the time for joking around was over) and made off with little Frankie. Given that he’s already committed murder and seen off the impressively impassive Agent Larsson (Bronagh Gallagher) with little difficulty, I wouldn’t actually bet against Ariel at this point. Although I would add that Hawkwind is his biggest weakness and Frankie seems the resourceful type. Fingers crossed. 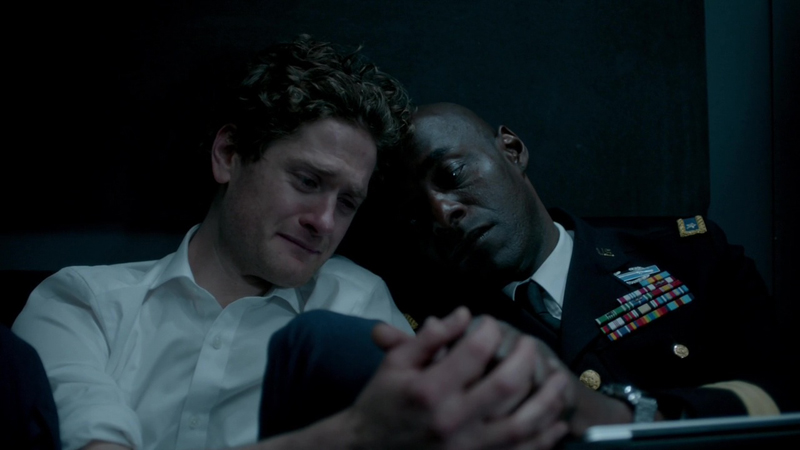 Kyle Soller continues to break my heart as Scotty, who truly is having to bear the weight of the world on his narrow shoulders; this week realising that the small matter of the Russians having abolished Daylight Savings Time might just bring ‘Operation Saviour’ plummeting back to earth. Jamie might be the classic everyman on a relatable journey to find out who he really is, but Scotty is increasingly giving this show its emotional pulse. From his devastation over boyfriend Gaines’ (Paterson Joseph) absence, to his growing realisation that the only way to save the world was to sacrifice sister Rhonda (Jenna Fischer), the one person who had always been there for him, I really felt for Scotty this week. Kudos to Soller for doing such a great job. 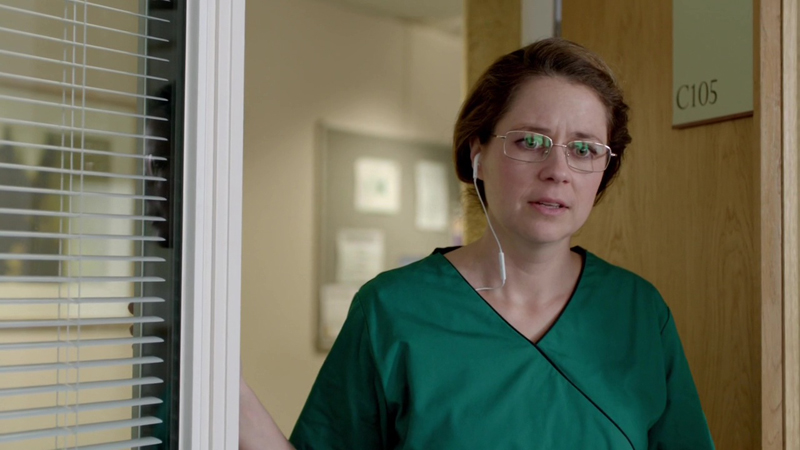 Talking of Rhonda, things aren’t looking great for her right now—although at least she got a chance to say goodbye to her dying husband Rajesh (Prasanna Puwanarajah) thanks to Gaines’ intervention. Her decision to break into the hospital to see Rajesh was clearly not the most intelligent of moves when you’re an international terrorist on the run, but it was a hugely relatable one, and it was hard not to will the formerly mild-mannered librarian on in her quest—even while acknowledging that it was almost certainly doomed. 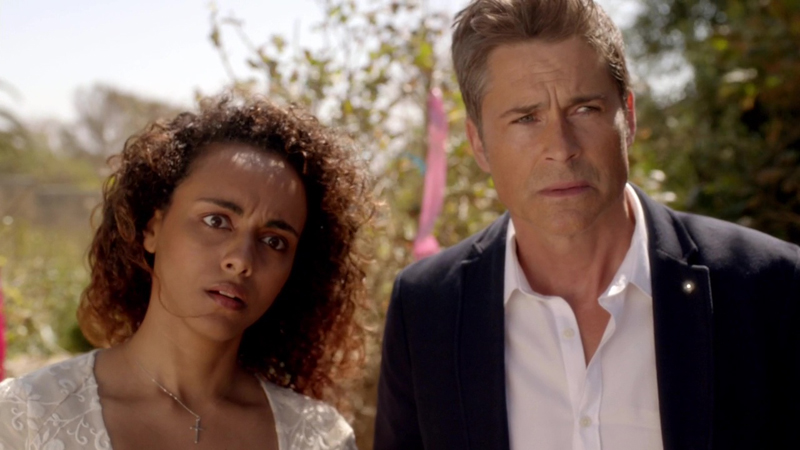 The Vatican ‘army of two’ got the lightest storyline this week, although one I suspect will have troubling repercussions. Father Jude (Rob Lowe) and Sister Celine (Gaia Scodellaro) spent the episode in Malta checking out a Paradise Cult headed up by the brilliantly named ‘Ruthless’ (“I’m Arless, she’s Ruth, they call us ‘Ruthless’, like ‘Brangelina'”). The only problem? To infiltrate the cult our holy duo actually had to get married, and more than that kiss; a circumstance that Sister Celine embraced with rather more fervour than Father Jude. The kiss itself was wonderful—brilliantly played by Lowe and Scodellaro to convey all the pent up passion that’s been building since the first week. Unfortunately, while they quickly busted the cult as nothing more than a bunch of pleasure-seekers hanging out in sybaritic heaven, having lots of group sex, the damage had been done. The episode ended with Jude having broken his vows of 20-years and sleeping with Sister Celine—something that I can’t help but feel he, as the older, wiser and more religiously committed of the pair, may well live to regret. 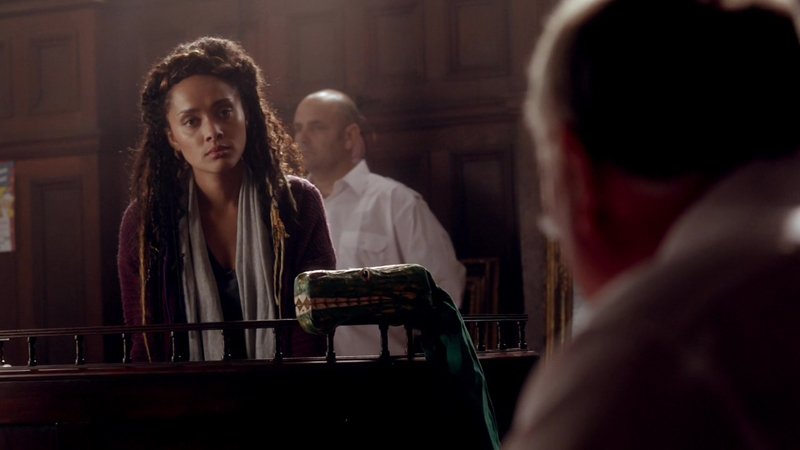 So what did you think? Were you touched by Rhonda’s reunion with Rajesh? Did you feel for Scotty? And do you think that Jamie should take Hawkwind back or steer clear? As ever all speculation welcome below…

THE HAUNTING OF BLY MANOR