I may have said this before, but I’m so glad giallo is having a renaissance. It’s fantastic that some of these 1970s Italian genre gems are seeing the light of day again, and getting enough respect to warrant restoration and proper Blu-ray releases. This latest addition to the Arrow Video catalogue has been an elusive title that never got a general release outside of Italy. L’iguana dalla lingua di fuoco / The Iguana with the Tongue of Fire is infamous for its confusing plot and nasty content. So I was grateful for an opportunity to finally watch a cleaned-up and uncut version, to make up my own mind…

The Iguana with the Tongue of Fire (hereafter Iguana) is a problematic film on so many levels! It certainly has points of interest for giallo aficionados, but it was one of many films rushed into production to cash in on the surprise box-office success of The Bird with the Crystal Plumage (1970)—Dario Argento’s seminal movie that created a demand for similar thrillers that imitators rapidly attempted to satisfy with pastiche. That backfired in this case, and the film flopped on its domestic release, possibly because it was in competition with a batch of particularly strong gialli, not least Argento’s own The Cat O’Nine Tails (1971). Also, it failed to secure any international distribution, probably because the content wouldn’t have got past most foreign film boards at the time. To rake in a little more revenue, a second version was released in Italy with additional adult content inserted, shown only at certain cinemas and late-night screenings. 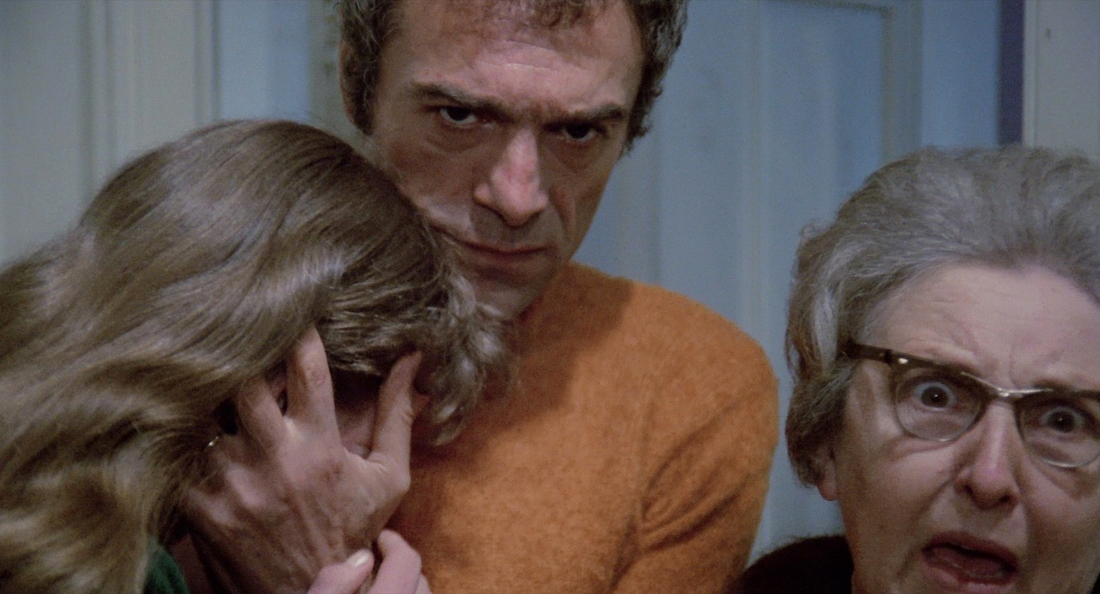 It starts well, but by half-way through it’s clear that Iguana either wasn’t written by one of the better screenwriters of the time or, more likely, the script wasn’t actually finished when it went into production. It comes across like the entire film is being made up as it goes along, with some heroic editing in an attempt to redeem it. It seems the director didn’t take the material all that seriously, deciding not to put his name to the production.

The credited director is the non-existent ‘Willy Pareto’ and the film is based on a non-existent novel by fictitious author ‘Richard Mann’, but both are pseudonyms of Riccardo Freda—who wrote the script with the assistance of Sandro Continenza. Clearly, both were more comfortable with writing sword-and-sandal epics. Now, Freda was a veteran director of more than 40 features by the time he made Iguana. He only made three more after. Often, he went under the moniker of ‘Robert Hampton’, but that was an attempt to appeal to audiences in the US who tended to avoid ‘foreign films’, rather than to distance himself from the product, which seems to be the case here. 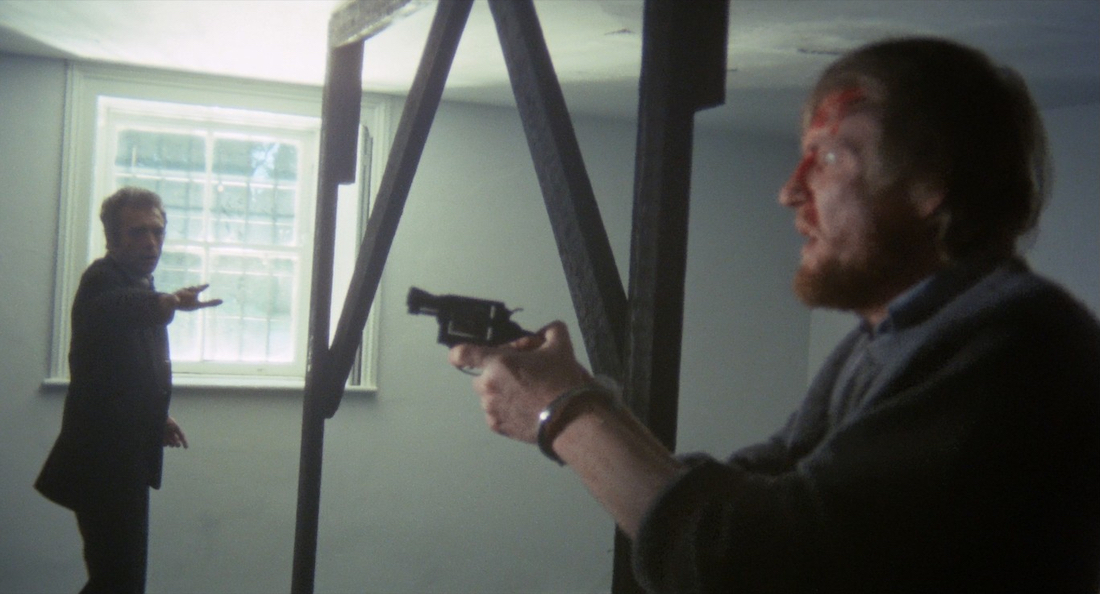 This is the only film he made as ‘Willy Pareto’ and I wonder if he chose it for its implication: the Pareto Principle was an observation first made in relation to the distribution of wealth in Italy, that 80% of the wealth belonged to 20% of the population. Wealth and power are prominent among the movie’s themes. Also, the crimes are distributed unevenly among more than one perpetrator… but I think I may be taking the analysis too far.

Well now, I could write an essay on the rich subtexts in Iguana that explore the chauvinistic sexism, homophobia, and racism that were rife in the 1970s. For example, the chief of police (Arthur O’Sullivan) proposes that a particularly nasty murder was “cowardly” and probably perpetrated by “a woman or a coloured fellow…” But I think I might be seeing things that were not deliberately put there by either writer or director. It could be that it actually is misogynistic, homophobic, and racist! 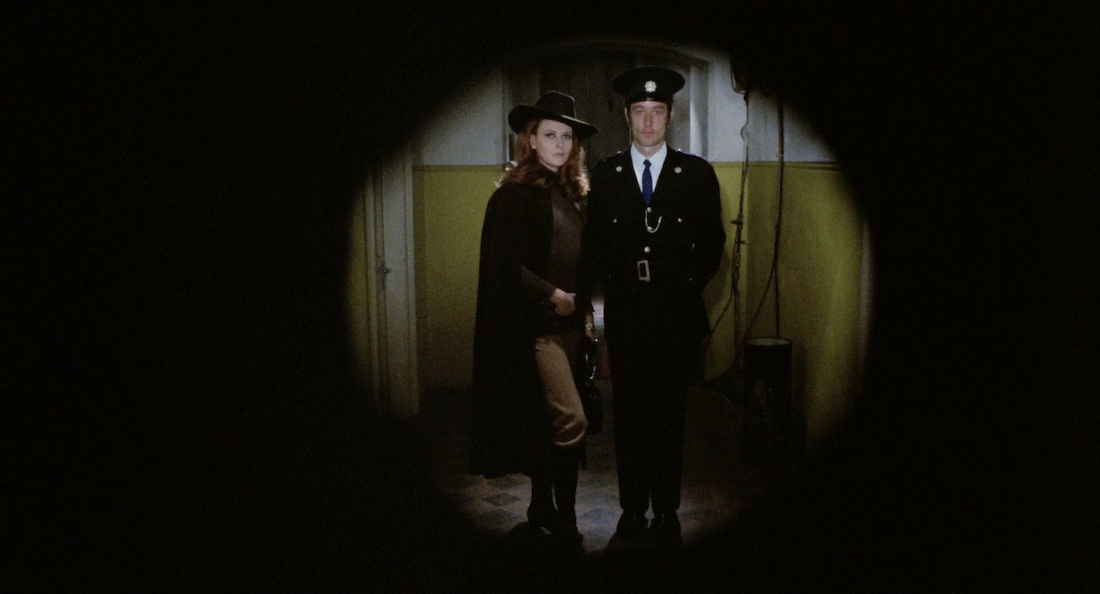 Unlike the best gialli, I don’t believe there was a lot of thought given to the film having any lasting appeal or attracting the attention of serious film buffs. This is Italian exploitation cinema, either at its worst or best depending on how one looks at it. Freda makes the mistake of thinking that confusing the audience is a substitute for presenting a cleverly constructed intellectual puzzle. I think a good giallo should do what a Sherlock Holmes mystery does well, which is to lay out clues in an unusual case that has a more sinister or surprising outcome than anticipated but can be worked out from the facts presented. So that it all falls satisfyingly into place, even if that takes some additional consideration or debate after the denouement.

In keeping with giallo tradition, we’re literally told who the killer is quite early on in the narrative. Thing is, we’re also told, several times, that it’s a different suspect. Just as in real life, there are lots of things going on that aren’t relevant and lots of characters who have nothing to do with a central narrative. If you’re really paying attention, you can narrow the suspects down, but there’s still no way to really work it out in advance. 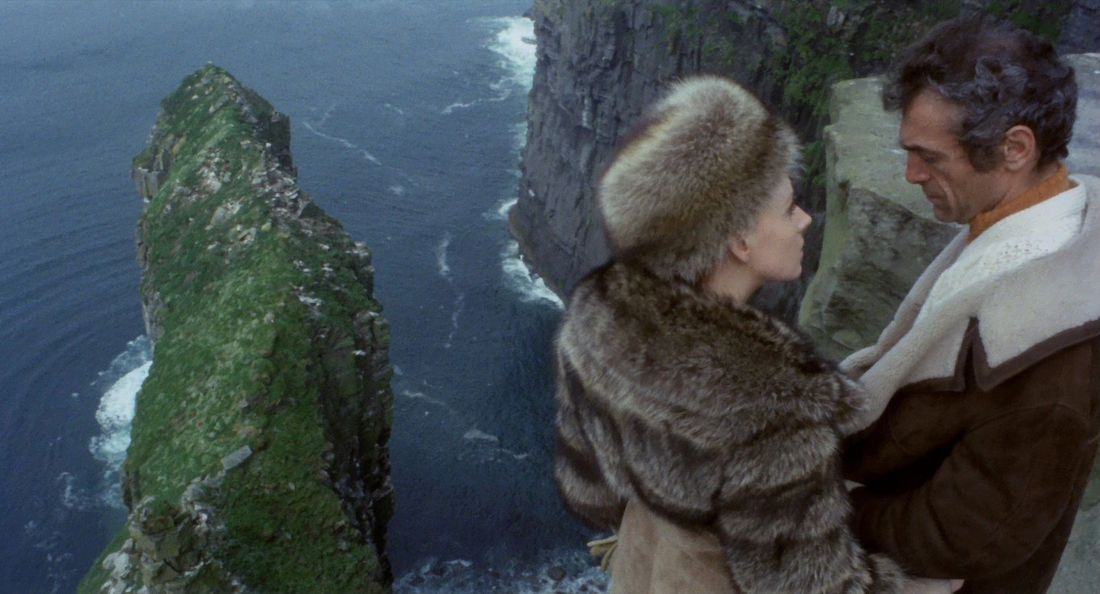 For the most part, Iguana comes across as an Argento knock-off. Even the title is imitative and, as Richard Dyer points out in his comments includes on the bonus material, it only makes sense if it were a Chameleon with the Tongue of Fire. The distributors must have been confused as to which reptile changes its colours and pattern to remain hidden in plain sight… Interestingly, Argento has cited Freda as one of his prime influences, more so than Hitchcock—or so he’s said. It was Freda’s ‘cruelty’ and willingness to cross the line that impressed him. He was more than likely referring to Freda’s more respected contributions to Italian horror with films like The Horrible Dr Hichcock (1962) and its follow-up The Ghost (1963), both starring Barbara Steele.

Although this is an early example of the giallo, it seems rather contemptuous of the formula. Or maybe simply having fun with it? Genre fans will enjoy the ride and the (mostly unintentional) humour of the script. It’s nice n’ sleazy, not to mention ‘cheesy’, and is best not taken too seriously… 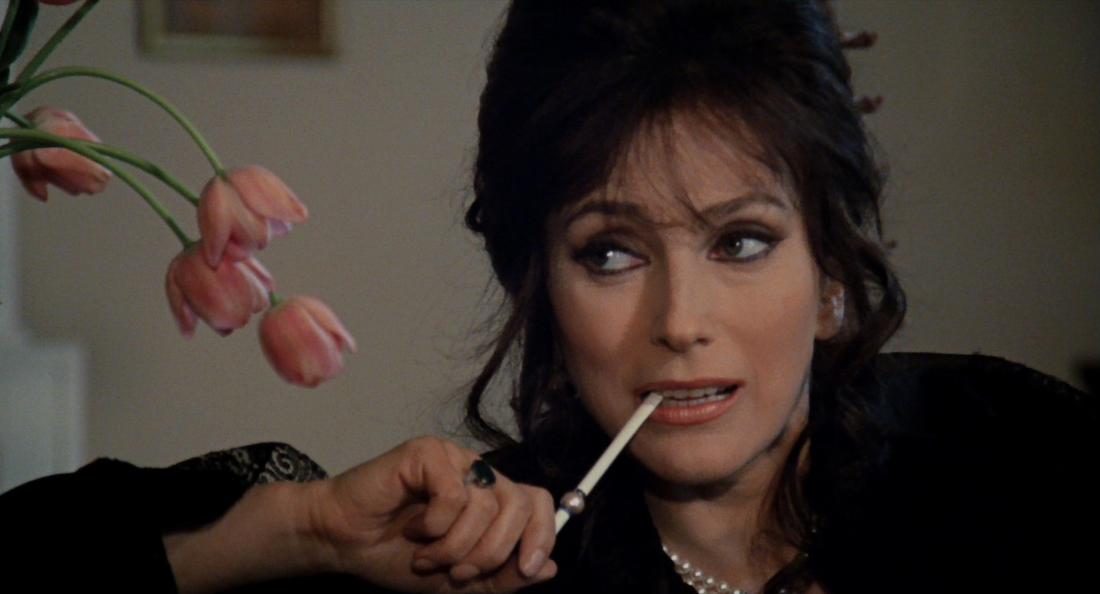 The opening credits set the mood beautifully, making good use of Dublin town as its unusual setting, with some superb ‘lounge-core’ music by genre stalwart Stelvio Cipriani—who composed well over 200 scores, including Mario Bava’s A Bay of Blood, Luciano Ercoli’s Death Walks in High Heels, and Osvaldo Civirani’s The Devil with Seven Faces—just three of the notable gialli also made in 1971. There are a few effective tracking and crane shots, and thoughtful use of colour that makes two significant vehicles stand out—a stunning ’70s orange Reliant Scimitar and a yellow Norton motorbike. Well now, that was enough to grab my attention!

Iguana unfolds like a police procedural and is peppered throughout with moments typically found in Poliziotteschi involving hard men, violent cops, and unscrupulous detectives that rely mainly on the ‘stumble-upon’ method rather than any solid deduction. There’s a respectable body-count made up of matter of fact murders, with the opening and final scenes the only ones that can really be called set-pieces. The first victim is a woman who is viciously murdered, her face dissolved by acid—in a rather inventive, yet totally unconvincing animated insert! Her body is later discovered, by an incongruous schoolboy, in the boot of a limousine belonging to the Swiss Ambassador (Anton Differing). 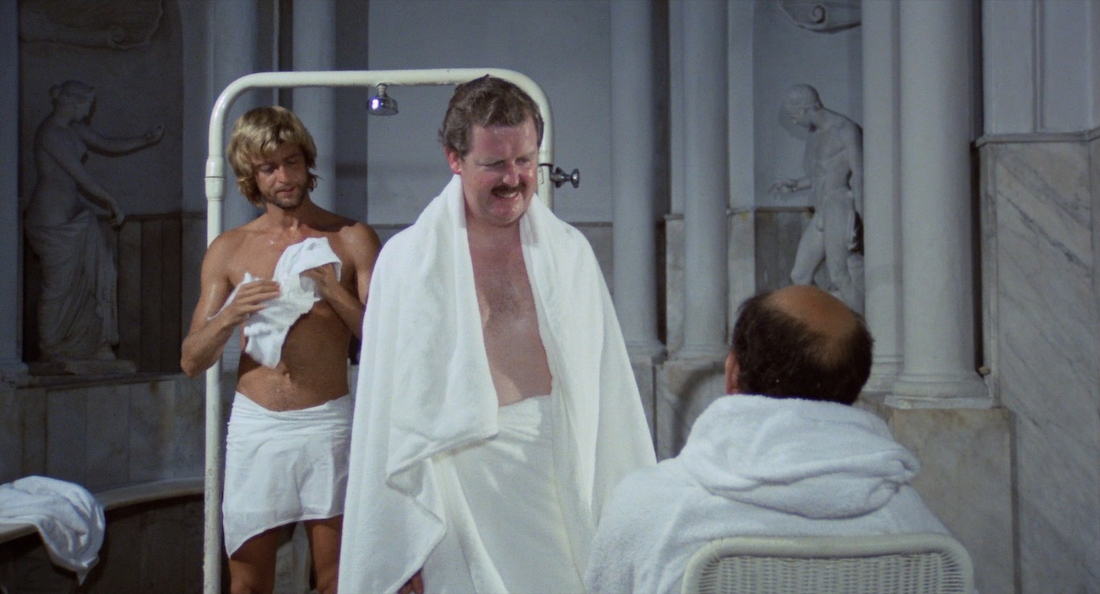 Differing is one of those class acts that brings instant gravitas, no matter how cheesy or B-grade the material he has to work with. Unlike most of the cast, he only overacts once or twice. It seems likely that most of the actors didn’t understand their characters any deeper than the lines they deliver—which may well have been different when dubbed for the final cut anyhow!

There are some notable names making up the rest of the cast too. Luigi Pistilli takes the lead role of John Norton, whom we first see in the opening scenes, ironically riding his Norton. He racked up plenty of cult cinema roles in the 1960s and ’70s. His first notable appearances were in For a Few Dollars More (1965) and The Good, The Bad and the Ugly (1966) before he became associated with gialli in The Sweet Body of Deborah (1968). He sandwiched Iguana in-between The Case of the Scorpion’s Tail (1971) and A Bay of Blood. He’s more than capable here as a flawed ex-cop, now working undercover, though his dubbed Irish accent is outright funny. Apparently, Freda was disappointed that he didn’t get his first choice of Roger Moore for the role and reluctantly settled for Pistilli. 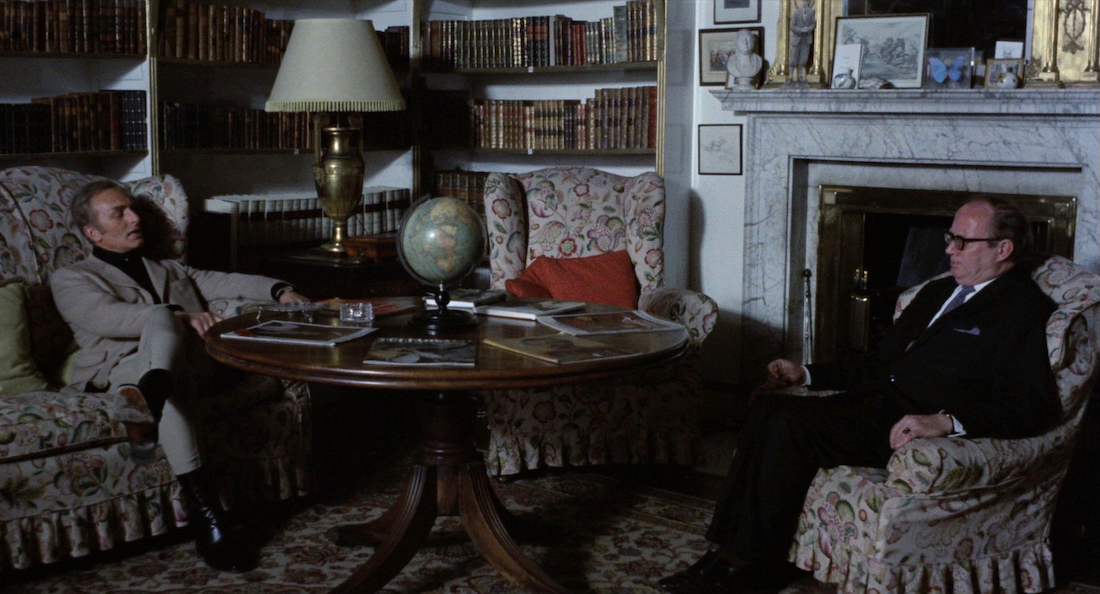 The female lead is taken by Dagmar Lassander, who’d already starred in Mario Bava’s A Hatchet for the Honeymoon (1970) and Luciano Ercoli’s enjoyable blackmail thriller The Forbidden Photos of a Lady Above Suspicion (1970). Here she plays the Ambassador’s sexy, carefree, some might say reckless, daughter Helen Sobiesky—just one member of a confusing set-up that owes much to the dysfunctional Gothic family trope, in contrast to Norton’s cosier, almost sitcom-style family.

In addition to O’Sullivan’s chief of police, there’s also a smattering of Irish talent in bit parts; the most prominent being Niall Toibin as the sinister doctor who suspiciously crops up at several of the murder scenes. He relishes the role and revels in the cheesiest dialogue of all. He’s presented as a prime suspect, with dramatic zooms into tight close-up as he states “the police will never catch the murderer, never! He’s far too clever!” whilst shaving Norton’s scalp with a cutthroat razor before stitching up a wound. He’s since been a regular character actor on UK TV including recurring roles as Father MacAnally in Ballykissangel (1996-2001) and Dr. Paul O’Callaghan in The Clinic (2003-05), but I remember him best as the staunch Reverend Coot in Rawhead Rex (1986). 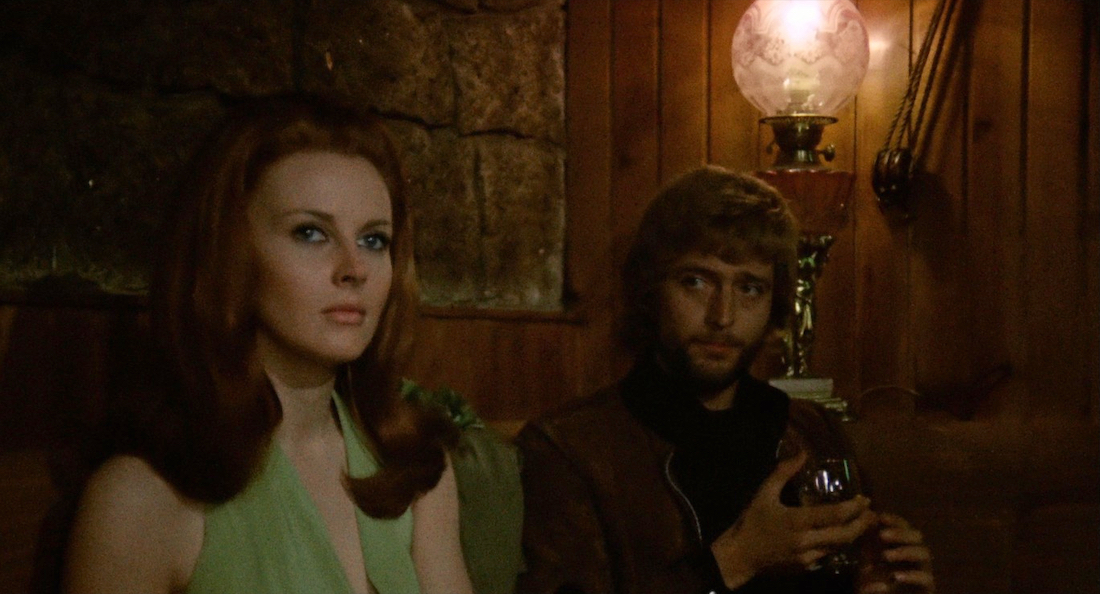 So, for the most part, the cast is fine and do their best with what they’re given. The film’s other primary strength would be the use of locations that make the most of Dublin and includes some breathtaking, and scarily vertiginous, filming on the spectacular Cliffs of Moher. The art department also keeps it real with some convincing interiors from the Ambassador’s residence to the small flat where Norton lives with his amateur sleuth of a mother (Ruth Durley) and his young daughter.

The denouement is pretty extreme, as we catch a glimpse of Freda’s cruelty. I found it very uncomfortable viewing. Some of the characters we’ve gotten to like, and there aren’t too many of those, are attacked with blunt brutality, either killed or ‘scarred for life’ (the plot doesn’t continue long enough for us to know for sure), and there’s a child in peril whose underage nudity only adds to the disturbing impact. All things considered, the ending is a mess that a psychoanalyst could have a field day with! It’s also irrational, but I suppose that’s one thing psycho-killers don’t need to concern themselves with.

It’s a film that can never be accused of being boring—un-PC, unconvincing, confusing, ludicrous, all those things perhaps, but never dull. That is until the final reveal, a moment of Scooby-Doo standard unmasking, but the make-up effects are so poor it still seems there’s another mask to be ripped off! By that time the viewer has almost certainly given up caring and just thinks, “is that it? Oh… bit of a waste of time, that.” 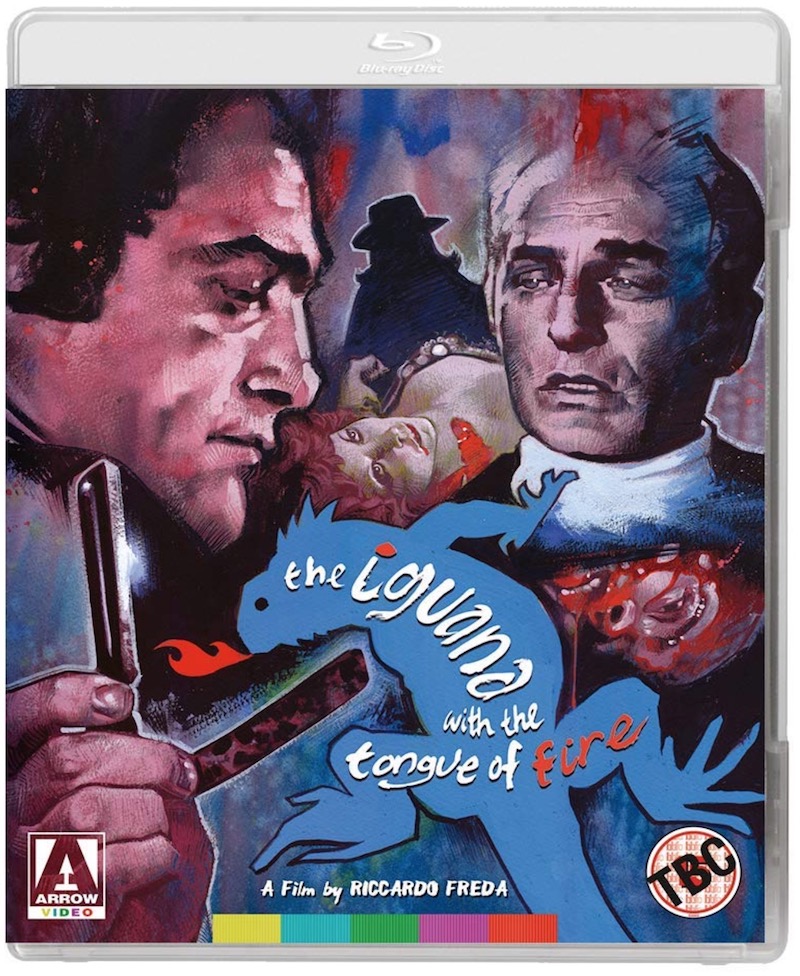 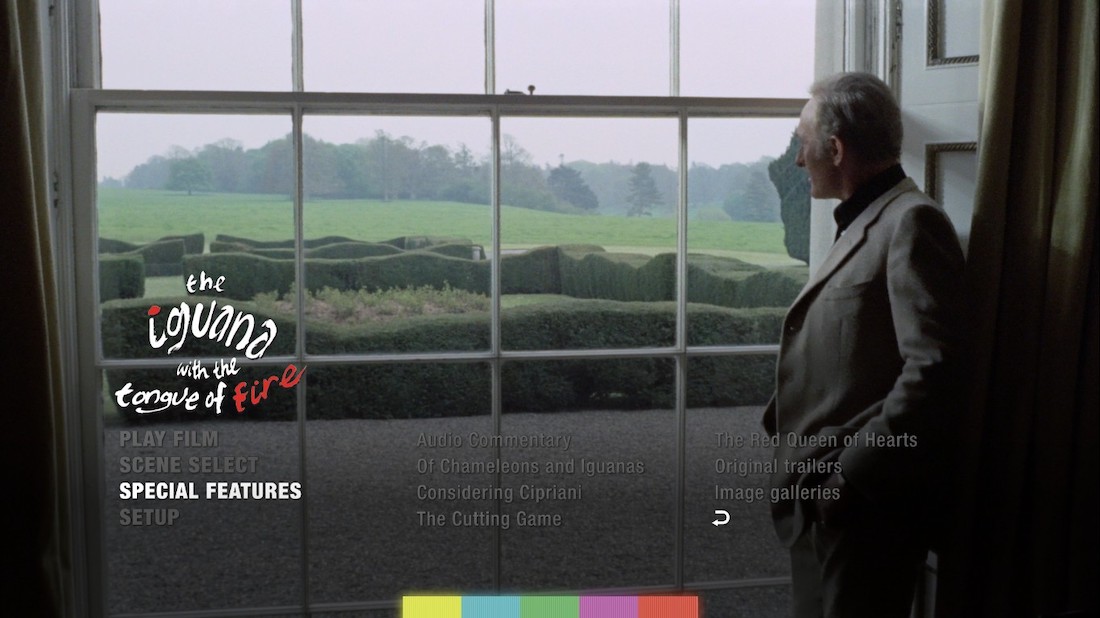 THE PRIVATE LIFE OF SHERLOCK HOLMES (1970)