German filmmaker Roland Emmerich got a toehold on the Hollywood ladder with Universal Soldier, which provided a clear blueprint for much of his American career: competently made but uninspired amalgams of better movies. In this case, Universal Soldier is an unabashed combination of Rambo: First Blood (1982), The Terminator (1984), and RoboCop (1987), but never as entertaining or interesting as any of its inspirations.

The film opens in Vietnam, 1969, with a short prologue where US Army soldier Luc Deveraux (Jean-Claude Van Damme) finds a burning village where his squad and locals have been slain by his insane sergeant, Andrew Scott (Dolph Lundgren), who’s made a necklace of severed ears taken from his innocent victims. Deveraux tries to save a Vietnamese couple Scott is still holding hostage, but it doesn’t go to plan and the villagers are killed, shortly before Deveraux and Scott shoot themselves to death during an ensuing fight. 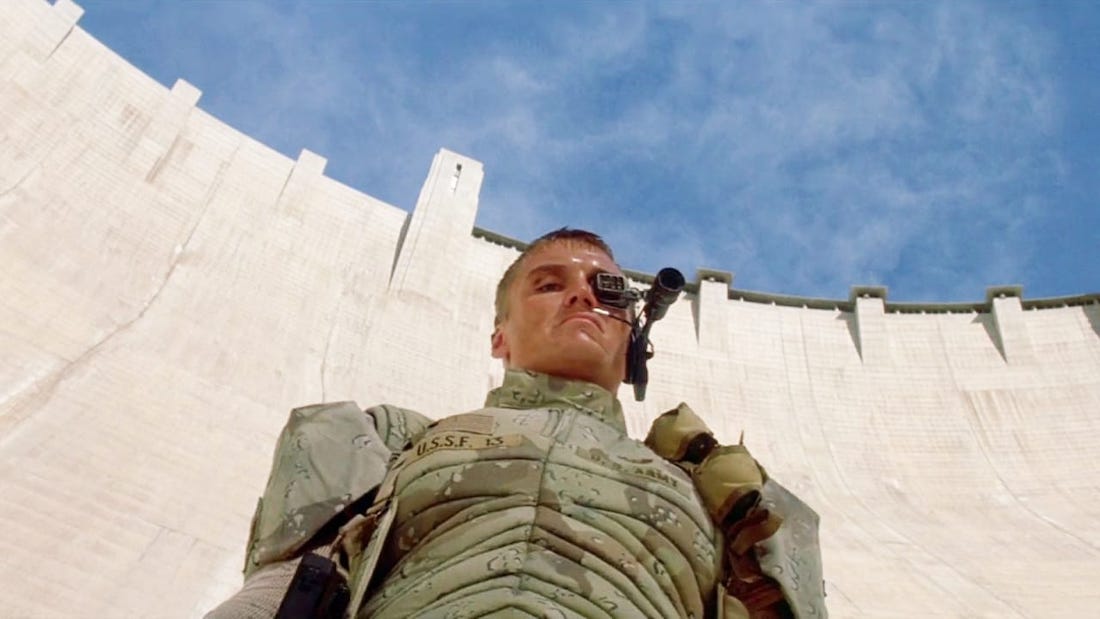 25 years later, TV journalist Veronica Roberts (Ally Walker) is reporting on another successful operation by the mysterious “Universal Soldier” (UniSol) program, as these elite troops eliminate a gang of terrorists at the Hoover Dam. And it seems that Deveraux and Scott are amongst the secretive squad, but they haven’t aged a day and now seem to lack emotions. It doesn’t take a genius to realise what’s going on, of course. Deveraux and Scott were retrieved from their ‘Nam battlefield, cryogenically frozen, and have since been augmented into ‘super-soldiers’ with no memory of their previous lives. It’s the plot of RoboCop on a larger military scale and, similarly to Paul Verhoeven’s sci-fi classic, Deveraux starts to regain his memories and breaks free of his UniSol controllers to go on the run with Veronica… soon pursued by his old adversary Scott once the sergeant’s memories also resurface and he decides to take over the UniSol program as its new leader.

Universal Soldier isn’t a good movie, but it’s competently put together and it’s easy to see why Emmerich was interested in directing this after Andrew Davis (Under Siege) left the project over creative differences. Emmerich was actually set to make Isobar (a movie about a genetically-created monster let loose on a runaway train, to star Sylvester Stallone and Kim Basinger), but that movie fell apart and was cancelled by Carolco, so he hopped across to work on the studio’s Universal Soldier. It was a movie Carolco needed to be a hit to stave off financial problems, which put added pressure on Emmerich. 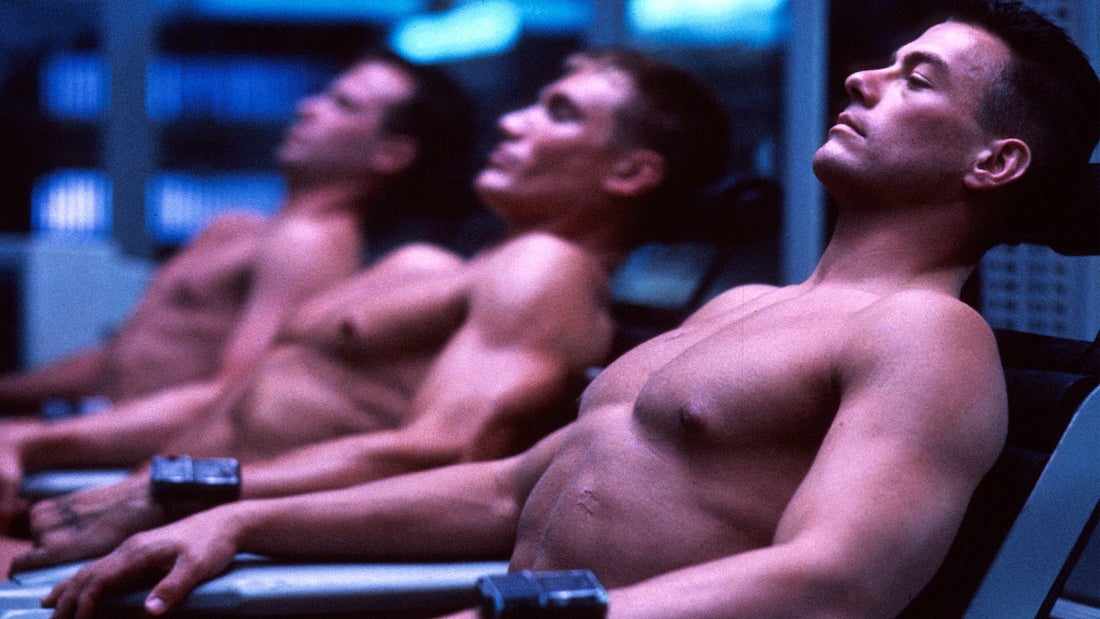 This probably felt like a safe bet for Emmerich, given how much of its DNA is taken from other movies that had already proven popular with audiences. Jean-Claude Van Damme was also a rising star at the time, now attempting to break free of the perception from Bloodsport (1988), Kickboxer (1989), and Double Impact (1991) that he was just a “Karate Guy”. Dolph Lundgren’s star-power was on the wane since his breakthrough in Rocky IV (1985), with flops like Masters of the Universe (1987) and The Punisher (1989), but Emmerich perhaps felt an affinity with both muscled European action stars and thought he could do what James Cameron did to make the acting limitations of Arnold Schwarzenegger a positive thing.

Lundgren is certainly the more entertaining of the two leads, coming across like Rutger Hauer on steroids. In 1992, while promoting the film at the Cannes Film Festival, the studio even staged an altercation between JCVD and Lundgren in order to sell the public on the idea there’s genuine animosity between these actors that plays into their characters. 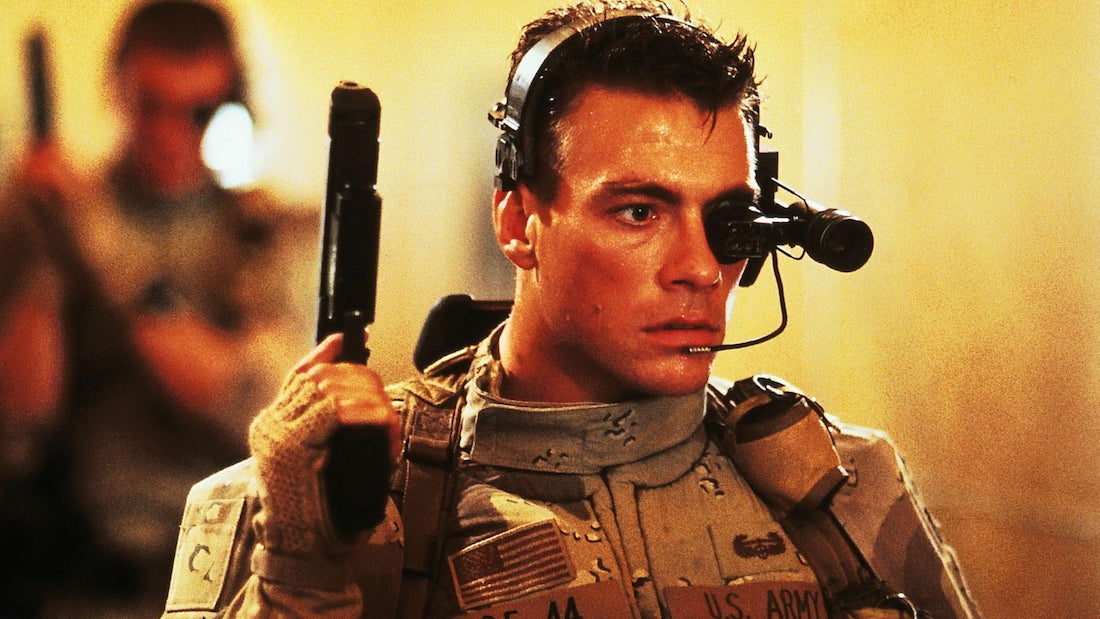 The problems with Universal Soldier are three-fold. Firstly, the narrative is driven by a mystery that’s non-existent for the audience, thanks to the prologue. It would’ve made more sense to open the story with the Hoover Dam operation and then reveal how Deveraux and Scott aren’t regular soldiers but have a mysterious background that explains their unemotional behaviour. As it stands, there’s little that feels unpredictable about the story and it becomes increasingly tedious to watch Veronica piece together Deveraux’s backstory, being several steps ahead of her from the beginning.

The second issue is that the action’s not especially creative or memorable, which is crime considering you have JCVD at his physical peak. There’s a climactic fight at Deveraux’s family homestead in Louisiana that delivers some fun, but it’s too little too late. The story keeps JCVD and Lundgren apart for long stretches, too, which is crazy and unforgivable. Nobody’s as interested in the tepid “love story” between Deveraux and Walker, which dominates the narrative too much on their ‘road trip’- as the actors have the same sex appeal as Ally Sheedy and “Johnny 5” in Short Circuit (1986).

And thirdly, there’s nothing here that’s original. Even forgiving its recycling of the RoboCop backstory with Terminator-esque soldiers, every set-piece feels like the writers are remaking moments they half-remember from better movies. So there’s an incident at a remote gas station with a comedy relief shopkeeper before it explodes, a brawl inside an all-American diner, a shootout at a motel, etc. Even the headsets the Universal Soldiers wear evokes The Borg from Star Trek: The Next Generation, a TV series that was peaking around 1991 when this was being made.

It’s no surprise to see that Universal Soldier was co-written by Dean Devlin, alongside Richard Rothstein (the Bates Motel TV Movie) and Christopher Leitch (director of Teen Wolf Too). Devlin would, of course, become synonymous with Emmerich during the 1990s, through the career highs of Stargate (1994) and Independence Day (1996) to the partnership-breaking travesty of their Godzilla (1998) remake. That trio of writers have hacky credentials, so a lot of Universal Soldier’s problems can be laid at their feet.

The characters and story are the main reasons the movie doesn’t click, as you feel no attachment to anyone or anything happening. Even the core motivation of Deveraux and the bad blood between him and Scott doesn’t grip emotionally, as everything rests on us having a huge investment in their demises in Vietnam, but that sequence is too brief and overblown to work effectively. And it also begs lots of follow-up questions, like why the military would consider resurrecting an army sergeant who went mad in the jungle and killed his own teammates, let alone put him in close proximity with the man who murdered him there.

When it was released in the summer of 1992, Universal Soldier was widely panned by critics at the time, who viewed it as a weak imitator of the game-changing Terminator 2: Judgment Day (1991)—as anything starring foreign and unemotional strongmen with funny accents is likely to. Amusingly, things have come full circle in 2019, as the recent Terminator: Dark Fate sequel seems to have borrowed a few things from this ’90s imitator - as the character of Grace was also an “augmented” super-soldier who needed to cool her body with ice after overexerting herself, and there was a big action set-piece at the Hoover Dam.

Universal Soldier only grossed $36M (having cost $23M to produce), putting Carolco on a downward trajectory as a studio until Cutthroat Island (1995) snuffed them out of business. However, Emmerich and Devlin reteamed for the sci-fi adventure Stargate and that enjoyed a greater success that launched their Hollywood careers properly. 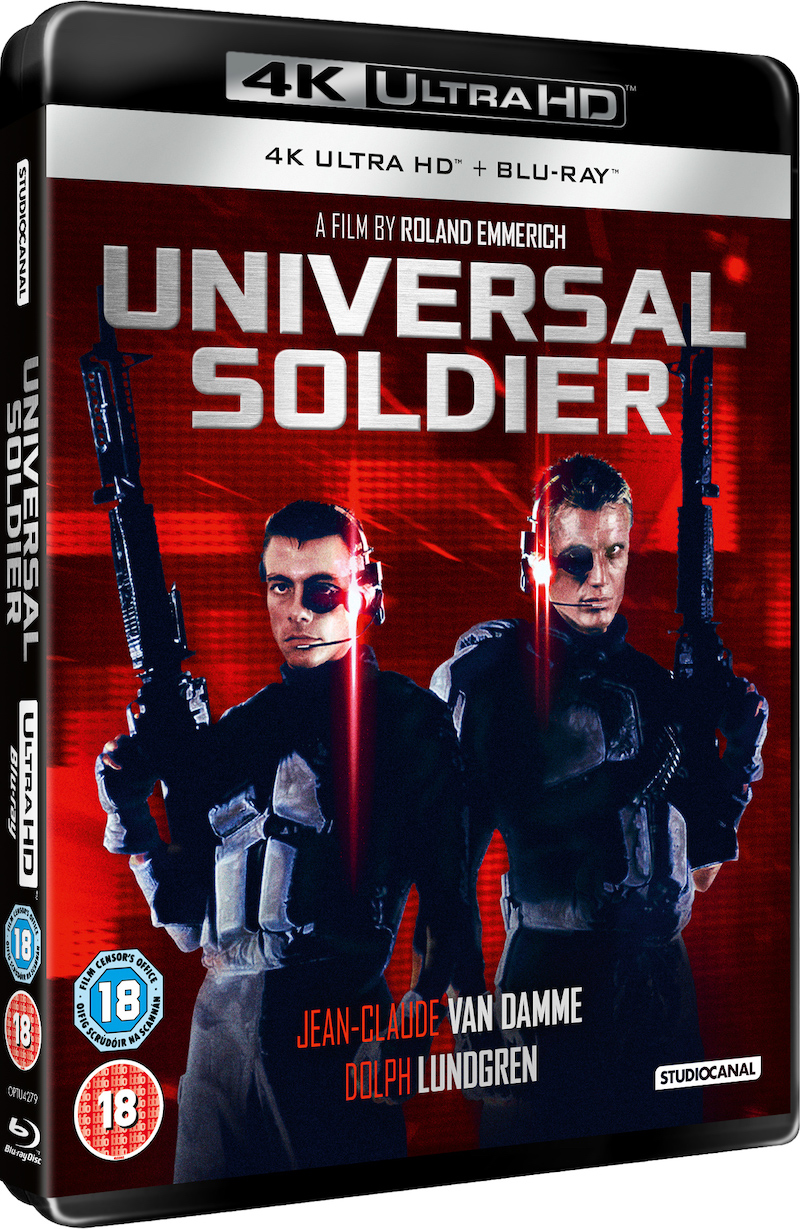 Let’s applaud StudioCanal once again, as they’re doing a fabulous job remastering some 1980s and 1990s classics and cult favourites on the 4K Ultra HD format. This is another excellent restoration from the 35mm camera negatives, in 1.85:1 aspect ratio, encoded with Dolby Vision HDR. The image is clean, detailed, vibrant, and look like it was made yesterday. There’s a lack of film grain, which suggests it’s been removed digitally, but purists likely won’t care because of how the clarity and colours reproduced make Universal Soldier on 4K the best it’s ever looked.

No Dolby Atmos, alas, but there’s a decent enough DTS-HD Master Audio 5.1 mix. Universal Soldier has the distinction of being the last movie released with Cinema Digital Sound (CDS), a precursor to DTS, which some feel was a superior sound experience. There’s enough oomph here with the bass and some atmospheric moments but, on the whole, it’s quite front-heavy, although the dialogue is clear and crisp.