There’s more to Pickup Alley than one would expect. Sure, it’s predictable, but only insofar as the plot plays out in a most satisfying way. It’s only about 10-minutes in when one can guess pretty much how it’s all going to end-up, mainly due to a solid set-up for a fairly straightforward narrative. So, watching it unfold accordingly is part of the pleasure and, if things had veered too far from expectations, it would’ve been disappointing. Director John Gilling consummately serves up a classic crime drama, but with enough savvy subversion of noir tropes along the way to keep it interesting.

It starts off with its most intense scene: a flustered woman (Dorothy Alison), who looks like she may have escaped a Hitchcock thriller, telephones the police to report that she’s identified a suspect named McNally and will be meeting him later. Indeed, we’re treated to some heavy Hitchcockian suspense as she doesn’t see what the audience does… a man lurking in the shadows behind her, eavesdropping. Clearly, this figure is McNally and she’s just blown her cover. When he emerges from the shadows we see… it’s Trevor Howard!

After his starring roles in films like Brief Encounter (1945), The Third Man (1949) and The Cockleshell Heroes (1955), Howard had a reputation for playing dependable, stoically British, leading men. So, it must’ve been quite a shock when, almost gleefully, he strangles his victim with her own chiffon scarf. It’s certainly an attention-grabbing way to begin a movie.

The murdered woman turns out to be the ‘kid sister’ of FBI narcotics Agent Charles Sturgis (Victor Mature). As her body’s loaded into the back of an ambulance, Sturgis pries open her closed fist to find a matchbook from the ‘Bear’s Den’ that she managed to take from McNally as he killed her. It’s the first in a trail of clues that’ll lead the narrative along. If one pays attention, there’s also the first sign that the film is in the hands of a clever director as we see the reflection of a ‘one-way’ street sign reflected in the ambulance window as the door is closed on the deceased.

Victor Mature is mainly remembered for his bare-chested roles in biblical epics like Samson and Delilah (1949) and The Robe (1953). He was rarely called upon to do much more than show off his physique and deliver lines. That’s a shame because, when you dress him in a sharp suit and put him a noir setting, you have a totally different actor! If you want to see him at his best, check out Robert Siodmak’s superior noir Cry of the City (1948). But here, he handles the role of Sturgis with ease and gives one of his better performances. He’s in his mid-forties and still a handsome fella, but his face looks convincingly lived-in. His malleable features come alive and those hooded eyes can convey a broad range of emotion from the brash to the subtle.

At face value, Pickup Alley keeps things simple with a fast-paced and pared-back story. But close attention reveals some cleverly interwoven character arcs and an underlying redemption narrative. It’s basically a fusion of police procedural drama and an action-driven jet-set pursuit across Europe. The original British title was Interpol, which is far more relevant to what the film’s actually about. The US distributors obviously wanted something more sensational! The posters made much of their tagline “This is a Picture About DOPE!” emblazoned in much larger typography than the title.

I suppose it is about dope. The death of his sister has taken its toll on Sturgis, who’s now fuelled purely by vengeance to track down her murderer, McNally. He’s frustrated in this vendetta because the kingpin never gets directly involved and he’s only able to catch “dope peddlers and needle pushers.” All hope seems lost when he learns that McNally’s slipped away and may be hiding out in Europe. Then he hears about Interpol, (the international investigation agency that the USA had only just joined in 1956) and decides the only way to tackle the growing problem of street-drugs is to pinch off the supply at its source. So, off he goes to London, England, in pursuit of McNally and to shut down his international drug ring.

Of course, McNally’s one step ahead and has left the London deal in the hands of his sleazy second-in-command, Salko (Alec Mango). Which brings us to the core theme of the film. Just like Sturgis had used his sister in his investigation, McNally uses the glamorous Gina (Anita Ekberg) as one of his ‘mules’ to smuggle drugs and jewels across borders. The relationship between Gina and McNally is ambiguous and there are even some subtle incestuous implications. Salko’s under the impression she’s one of the perks of the job and, in a rather uncomfortable scene, tries to rape her. Instead, she ends up shooting him. Her fingerprints at the scene provide a crucial clue and gives Sturgis someone to trail as she follows McNally across Europe.

Former beauty-contest winner Anita Ekberg was a model and usually cast on the strength of her arresting looks and striking hourglass figure, fitting the bill as a classic 1950s Hollywood blonde. She’d later become known as a muse of European arthouse cinema after her famous fountain scene in Federico Fellini’s La Dolce Vita (1960). She may first appear as a typical femme fatale, but her role here as Gina is more complex. She’s closer to a Hitchcock-style ‘woman in jeopardy’ and provides the central narrative thread that stitches the entire story together. Thematically, she’s an echo of Sturgis’s own sister. She’s also being exploited, although the motivation is very different. The turn-around for Sturgis comes when he relinquishes his single-minded vendetta, begins to cooperate with others, and sees that his own redemption is tied-up with that of Gina’s.

Although Jack Gilling never lets subtext get in the way of the action, it’s this extra layer that sets Pickup Alley apart from many mediocre noirs and exploitation B Movies, which is really how it started out. Probably the marketing strength (apart from being about DOPE!) is its location filming and this alone would have been enough to sell it to an audience of the day. It’s part of what attracted Victor Mature to the role, too. He was a big Hollywood name and that’s what production company Warwick Films wanted. Although he was looking to diversify into more character roles, he accepted a lower than usual fee because it was offset by what amounted to a paid holiday in England, Lisbon, Naples, Rome, and Athens! Expect a few scenes of him cutting an impressive figure in dark suit and tilted trilby as he walks past various tourist attractions. The scene in the candlelit Catacombs of Rome is fun, though one wonders how Trevor Howard could see anything without taking off his sunglasses!

Ted Moore’s cinematography is outstanding, for the most part. His dramatic noir lighting often borders on the baroque and he’s certainly not afraid to have the night scenes convincingly dark. This works well in contrast with the scenes shot in the bleaching light of the Mediterranean settings. Some of the Second Unit establishing shots, which may well have been stock footage, let the side down with bland exposure and graininess but serve as visual punctuation and add a realistic travelogue vibe. Moore rises to the challenge of using some dynamic angles and wide shots that take in two characters, one in close-up and another in the background, whilst keeping both in focus.

What we see here is the early work of one of Britain’s notable cinematographers. Moore had started his career in 1939 as a camera operator and earned his dues on films like African Queen (1951) for John Huston, and Carol Reed’s Outcast of the Islands (1951). He first worked for Warwick Films and producers Irving Allen and Albert R. Broccoli on Paratrooper (1953) and, recognising his talent, they promoted him as director of photography for A Prize of Gold (1955) and The Cockleshell Heroes, a war film co-starring Trevor Howard.

Broccoli would go on to hire Moore to photograph seven classic Bond movies. He won a BAFTA and British Society of Cinematographers Award for From Russia with Love (1963) and would be recognised internationally with an Academy Award for A Man for All Seasons (1966). Later he’d work on Ray Harryhausen’s Golden Voyage of Sinbad (1973), Sinbad and the Eye of the Tiger (1977), and Clash of the Titans (1981).

Pickup Alley may not be the ultimate example of British noir, but it brought the genre back into the limelight with some particularly strong examples following in its wake, such as the excellent Odds Against Tomorrow (1959), directed by the great Robert Wise, and Hell is a City (1960), directed by Val Guest for Hammer Films. Jack Gilling would also go onto direct a handful of films for Hammer including the classic Plague of the Zombies (1966), generally cited as his best, and The Reptile (1966).

If you’re looking for a sort of pre-Bond international crime thriller, where the bad guys deal drugs instead of arms and state secrets, then Pickup Alley won’t disappoint. The story makes sense and involves an array of lively characters. It’s visually inventive and there’s plenty of excitement in the form of car chases, rooftop pursuits, one of the bad guys even tries to outrun a train! The action sequences are well-planned and still look good. There’s snappy dialogue and a big and brassy jazz score from Richard Rodney Bennett. The whole milieu is deliciously 1950s with sharp suits, fantastic frocks, and great cars. It may be delightfully dated, but all in all, a satisfyingly entertaining and stylish thriller that deserves to be dragged back from obscurity with this digital restoration and Blu-ray release from Arrow Academy. 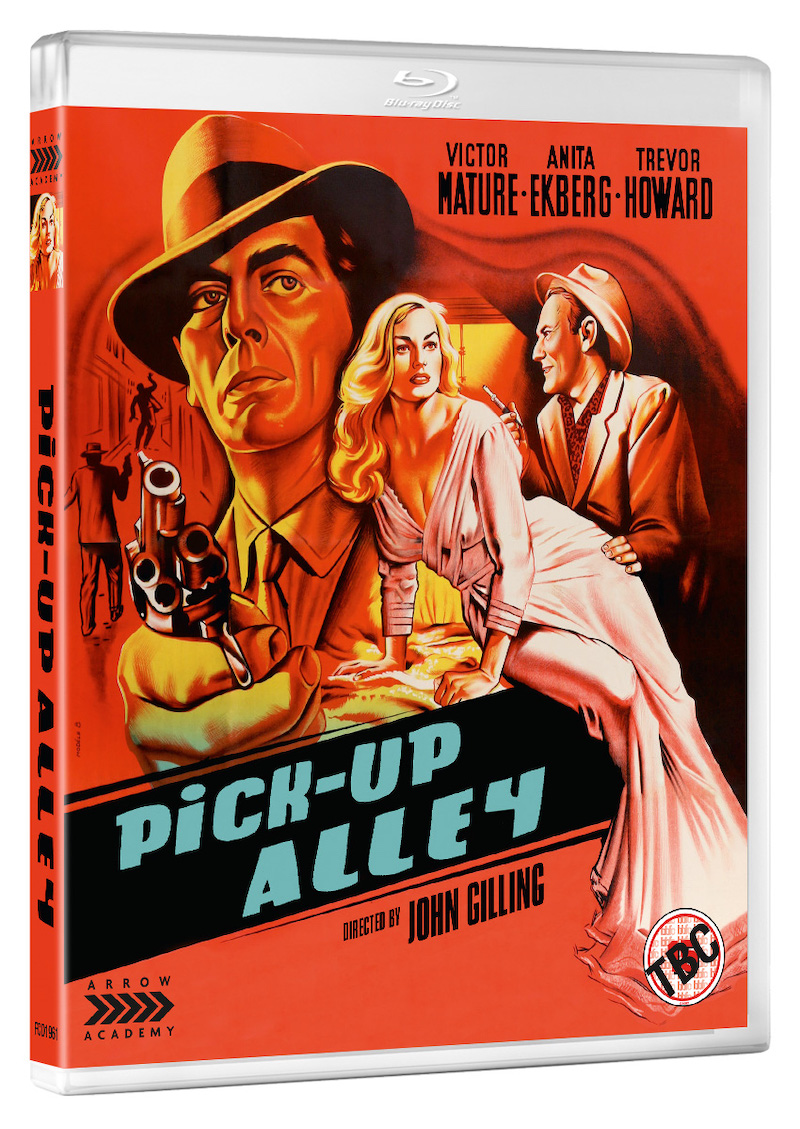 This is actually a little light on bonus material for a ‘Special Edition’. There’s no audio commentary, which would’ve been most welcome because there’s plenty to talk about. I’d have appreciated something about the locations and some background to the lesser-known Eurocentric cast. Although underlying, there are subtexts to be pointed out and analysed… 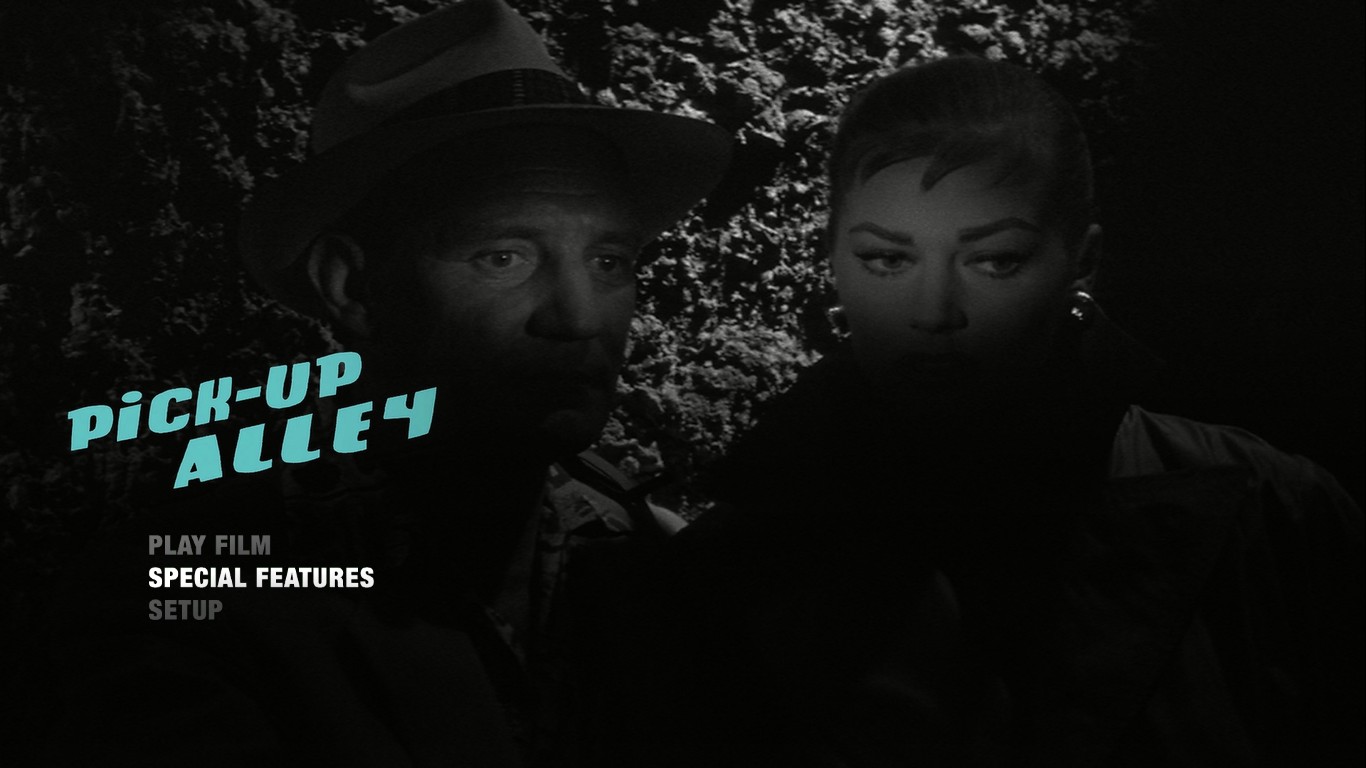