Terry Gilliam abandoned a planned adaptation of Charles Dickens’ A Tale of Two Cities, instead agreeing to direct Twelve Monkeys. Straying from his preferred method of only working on films he wrote, this marks only Gilliam’s second project he directed without contributing to the script. He did so because he was so captivated by what David and Janet Peoples had written, as it dealt with “… time, madness and a perception of what the world is or isn’t.”

Twelve Monkeys got into production difficulties from the beginning. Owing to the spiralling budget of Kevin Reynolds’ Waterworld (1995), Gilliam was only given a budget of $29.5M by Universal Pictures. This was a small amount for a big Hollywood sci-fi movie, so Gilliam had to convince his two leads, Bruce Willis (Die Hard) and Brad Pitt (Thelma & Louise), to work for below their usual asking price. 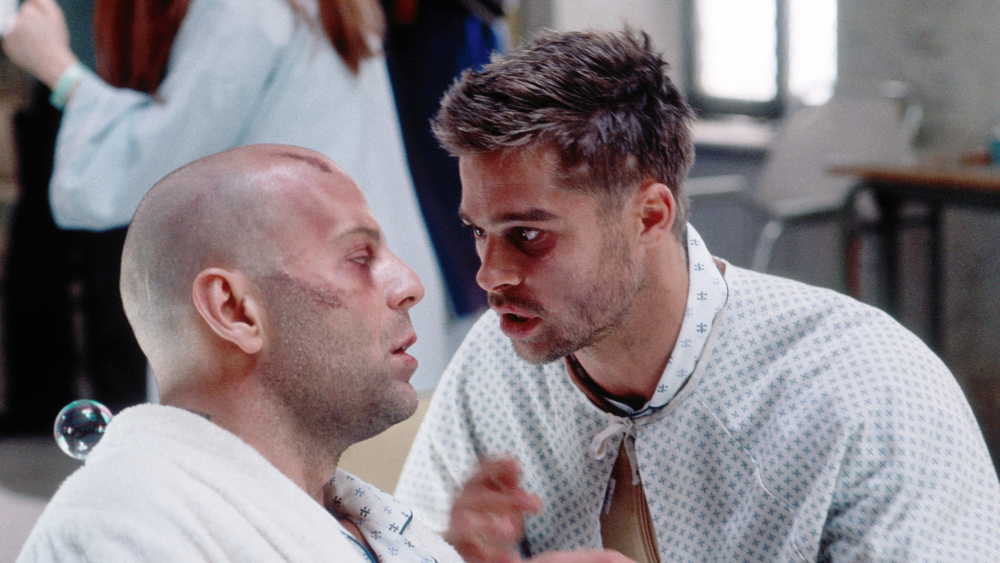 It’s the year 2035. Decades earlier, in 1997, a deadly pandemic was released by ‘The Army of the Twelve Monkeys’, wiping out most of the planet’s population. In exchange for a pardon, a prisoner called James Cole (Bruce Willis) volunteers to extract information from the past in the hope of scientists finding a cure. Through a bizarre process, Cole’s transported back to 1990, six years too early, and finds himself institutionalised in a hospital because of his insane story about his origins. Cole also meets Dr Kathryn Rally (Madeleine Stowe), a psychiatrist he grows close to on the ward, and a disturbed patient called Jeffrey Goines (Brad Pitt).

The cast delivers incredible performances, but it’s Willis and Pitt who linger most in the memory. More commonly seen portraying action heroes at the time, Willis here gets to play a sweet man with a fragile mind. Handling the emotional range required perfectly, he brings out the paranoia and anxiety of Cole extremely well.

Pitt was nominated for an Academy Award for Best Supporting Actor as Jeffrey, bring a restless manic energy to his character, with all the nervous ticks of someone suffering a terrible mental illness. In addition, Madeleine Stowe (The Last of the Mohicans) plays a more straightforward character she managed to make slightly complex as she assists Willis in his mission.

As with most movies involving time-travel, the narrative involves a paradox that fans still discuss exhaustively, but who cares about that? What’s most impressive about Twelve Monkeys is that Gilliam successfully creates another rich and engrossing universe. He has the confidence to tackle a pretty difficult issue and gives the viewer a unique portrayal of the future, avoiding the conventional atmosphere of a post-apocalyptic setting. There’s an uncomfortable pall hanging over the movie, with Gilliam crafting dark imagery of mankind’s technological advancements: frozen cities are gloomy with towering skyscrapers, while scientist work in crazy looking laboratories. 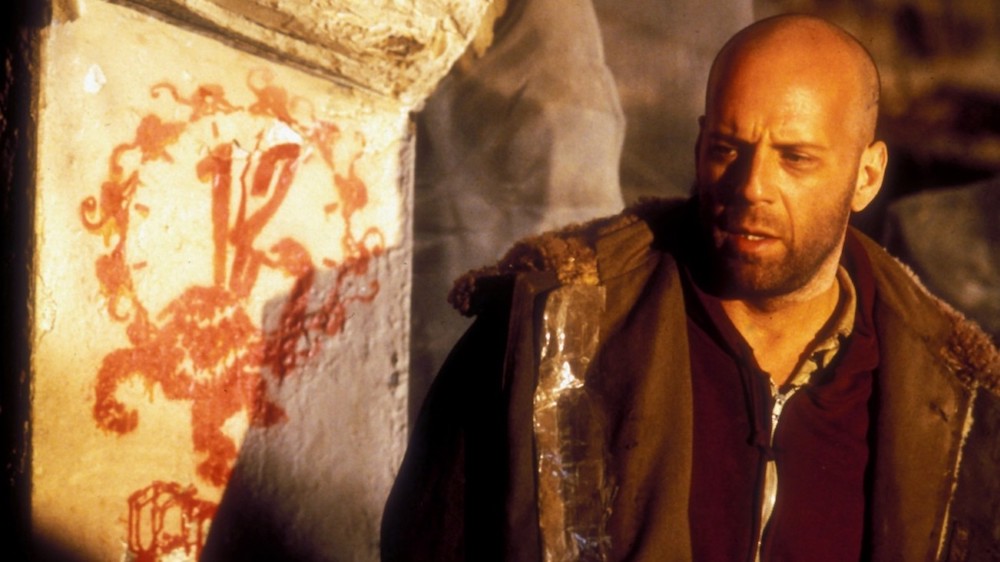 Aided by the cinematography of Roger Pratt, who also worked with Gilliam on The Fisher King (1991), the clever use of tilted camera angles and wide angle lenses add to Twelve Monkeys’ off-kilter vibe. Gilliam places the viewer inside the head of Cole, so we share his confusion and exhaustion as he’s thrown back and forth through time on a mission he’s never isn’t a symptom of an illness. Nothing is quite what it seems. Gilliam hints at this from the opening shot, while it’s confirmed by the unforgettable end sequence that’ll have audiences replaying the story again in their heads.

The narrative can occasionally be difficult to follow as Gilliam keeps wrongfooting us. Constantly playing tricks through several twists and turns, this sci-fi thriller reminds me of classic Hitchcock movies. Maybe not coincidentally, the director includes a sequence of Cole and Rally hiding in a movie theatre where Vertigo (1958) is playing. Later in this movie, Gilliam has Cole replay the same story depicted in Vertigo, with the same score playing over the sequence. Is Gilliam having mischievous fun, or does it signify how Cole’s life is caught between the reels of a movie going back and forth between past to present? Either way, the cinema screen is Gilliam’s canvas and he knows how to paint a mad and ironic tragedy.

The unnerving score by Paul Buckmaster adds a sense of anxiety that’s also very important for the storytelling. The unconventional editing also helps engage, with its constantly shifting tones. Gilliam uses this sci-fi tale to tackle love, regret, fear, and anger…. but presents things in a manner not everyone will enjoy. However, unlike Brazil (1985), Twelve Monkeys is easier to follow and has a plot that holds together better. Having not seen Twelve Monkeys in over 15 years, returning to it with fresher eyes, several scenes may have dated, but it’s still a fantastic movie about altered perspectives and the absurd journey we’re all making through time. 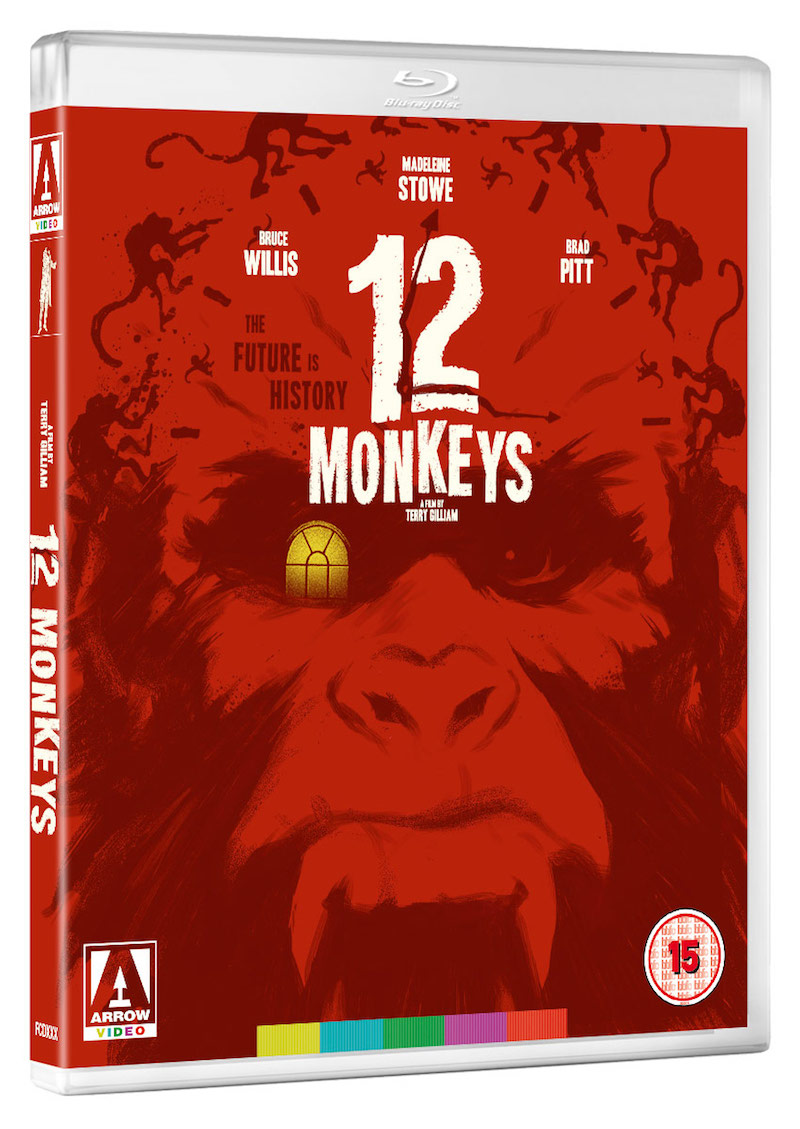 For the first time, Arrow Video provide a new 4k scan of Twelve Monkeys. The film will never be perfectly sharp and crisp, due to Gilliam shooting the majority of his scenes with a filter that replicated a dreamlike haze. While in motion, it’s a smooth looking picture, although it does retain the rich grain texture of film stock that adds a slight noisiness to the image.

Details in the production design are enhanced incredibly here, especially the steampunk-inspired futurism. Each object contributes to Gilliam’s desired effect and effectively enhances his surreal atmosphere. Close up scenes are vivid with facial definition and the city scenery shows prominent textures on the buildings. The colour palette is dull and dreary, jumping from a rustic orange when in the underground future to the strikingly high contrast during Cole’s flashbacks.

The DTS-HD Master Audio 5.1 soundtrack adds to Gilliam’s bizarre imagery. Bursts of steam through underground tunnels discreetly jump from speaker to speaker. In several moments voices swirl around immersing us in Cole’s twisted perspective. One brief battlefield scene with bullets and mortar shells taking over the soundstage is definitely a highlight of this DTS-HD mix. The dialogue is clear and precise, although several crowded locations (a city, an airport) could possibly have been filled with more ambience. Bass delivers some healthy moments of low frequency, while Buckmaster’s original score has some potent moments.

The extras are a little disappointing for an Arrow release, sadly.