Sometimes, formulaic films can just be exactly what we need, and Eddie the Eagle is one of those films. While watching it, you’ll be very aware it’s following the template of so many other inspirational and uplifting sports movies, but that doesn’t stop it from working tremendously. That’s especially true if you don’t know all the details of what really happened in the true story of British Olympic ski-jumping hopeful Michael ‘Eddie’ Edwards (Taron Egerton), who went from mere amateur to Olympian, seemingly propelled by the power of his dreams alone.

At the 1988 Winter Olympics, the very same games that saw the presence of Jamaica’s national bobsled team (featured, of course, in Cool Runnings), Eddie “The Eagle” Edwards became a sensation by inspiring spectators with his unorthodox but brave approach to ski-jumping. He was never considered to be making a claim for any medals, because of his relative lack of training, but his ability to take on those challenges in the first place still showed immense courage. Here, Egerton plays the epomymous character, with Hugh Jackman as his fictionalised trainer Bronson Peary (while Eddie did have a real trainer, this character is not too similar to his real-life counterpart). 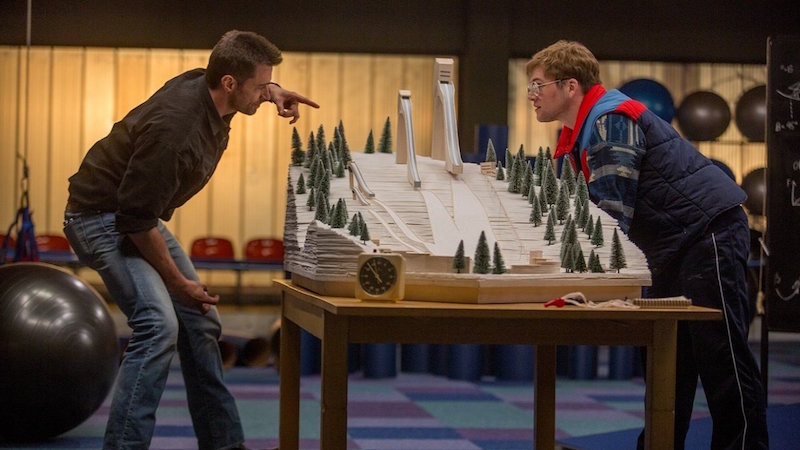 Eddie the Eagle is a film that’s been in development for a very long time. Plans for a biopic about the British ski-jumper have existed since at least 2007, when Steve Coogan was linked to the title role and Alan Partridge: Alpha Papa’s Declan Lowney was attached to direct. After that, Harry Potter’s Rupert Grint replaced Partridge in the title role, before director Dexter Fletcher took over, casting Jackman and Egerton, with Kick-Ass’s Matthew Vaughn producing. The resulting film doesn’t necessarily feel like one that has gone through as many iterations as it has, yet it’s also the most straightforward approach to telling this story.

Indeed, Eddie the Eagle targets a heartwarming sweet spot with remarkable accuracy, and Egerton is simply brilliant in the lead role. His previous film, Kingsman: The Secret Service, might be lacking in nuance—and stuffed full of meaningless, stupid violence—but Egerton was terrific in it and proved he has real star power. He capitalises on that here by playing this character with such passion and sensitivity, not making him out to be misguided and silly but showing Eddie’s determination as much as his vulnerability. In a lesser actor’s hands, this could’ve easily come off as caricature, but it is instead a wonderfully multi-faceted portrayal of an interesting man who could never give up on his dreams. 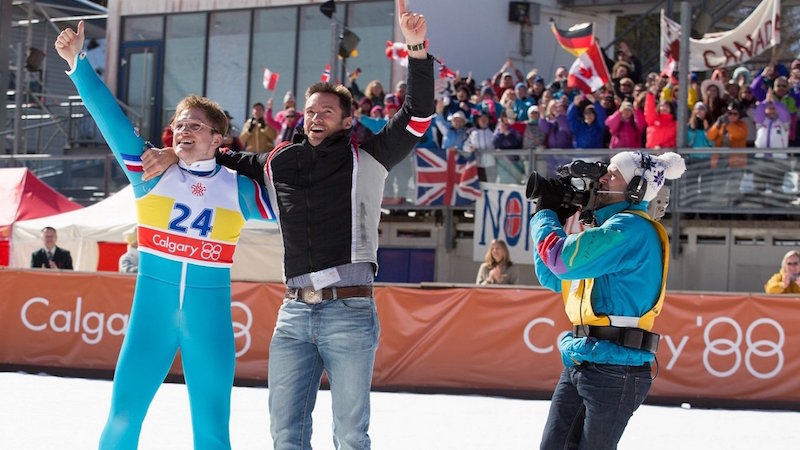 One of the film’s central themes is how important it is that sport be open to all. Often quoted throughout and displayed at the end is that, “the most important thing in the Olympic Games is not winning but taking part; the essential thing in life is not conquering but fighting well,” a quote from Pierre de Coubertin, who was partly responsible for reviving the Olympic Games in 1894. This theme, of the importance of participation even if victory isn’t an option, is present throughout, and the story commends the idea of holding on to the most impossible dreams.

Eddie’s successes, then, all become personal victories. The film is structured in such a way that allows those achievements to seem more special than any against an external opponent, making you focus on each personal best he sets on his road to taking part in the Winter Olympics. Because we end up paying a lot of attention to his development and training as a ski-jumper, it makes us share in his elation when Eddie surpasses his previous bests and feel crushing disappointment when he’s unable to. The bravery of what he attempts and the audacity of his hopefulness are certainly both depicted very successfully in this script, and through Egerton’s performance. 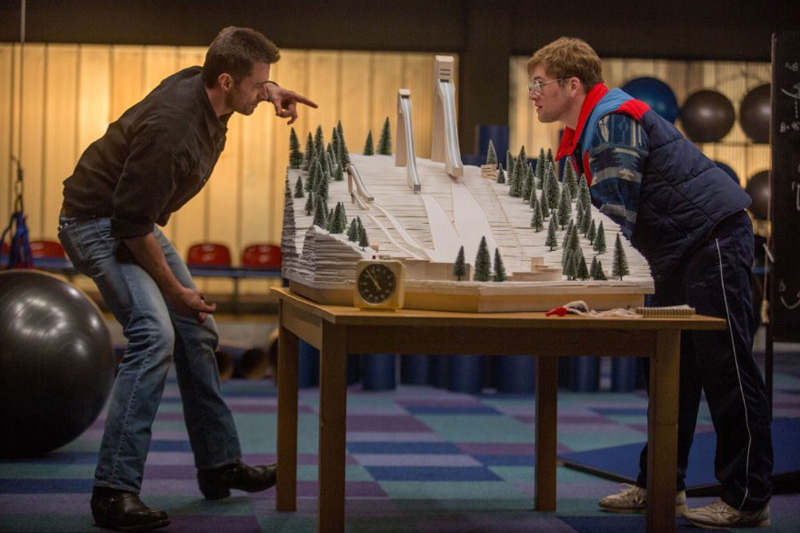 The film also convincingly suggests that success is not all we’re looking for in sporting heroes. The immediate reaction and joy from the crowd is shown to be less ‘laughing at the ridiculous ski-jumper’ and more encouragement and excitement at seeing somebody so ordinary push themselves toward the extraordinary. It shows that the level of passion and commitment shown by Olympians might speak louder than the number of medals they end up winning, and Eddie the Eagle convincingly argues that the hope to compete is just as important as the hope to win.

The lead character’s journey is one of proving those that doubt him wrong, so it’s unsurprising to see that his father plays a small but key role as the person constantly telling him to grow up and give up on his childhood dream. For Eddie, then, the narrative becomes all about proving his dad wrong and showing that there’s more to him than meets the eye. The same can said of Jackman’s character, who slips into a father figure role for Eddie but is ultimately striving to prove his old coach that he understands and loves the sport that he left behind many years ago. Defying exceptions is what Eddie the Eagle is all about, and if you go in expecting that inspirational narrative not to work on you, in the end you might just find that the film has what it takes to prove you wrong.