After the success Terry Gilliam enjoyed with fantasy Time Bandits (1981) and dystopian sci-fi Brazil (1985), the final part of his ‘Trilogy of Imagination’, The Adventure of Baron Munchausen (1988), became a notorious box office disaster. The budget ballooned from $23 million to an alleged $45 million (Gilliam refutes that figure), and Baron Munchausen only grossed $8m during a limited US release.

Reputation dented by the debacle, the filmmaker’s career was in a precarious position by the end of the 1980s, so he regrouped and changed gear with The Fisher King. The movie, written by Richard LaGravenese, is a New York comedy-drama with a whiff of magical realism, but it’s foremost a story about an unlikely friendship that heals the psychological wounds of two men… 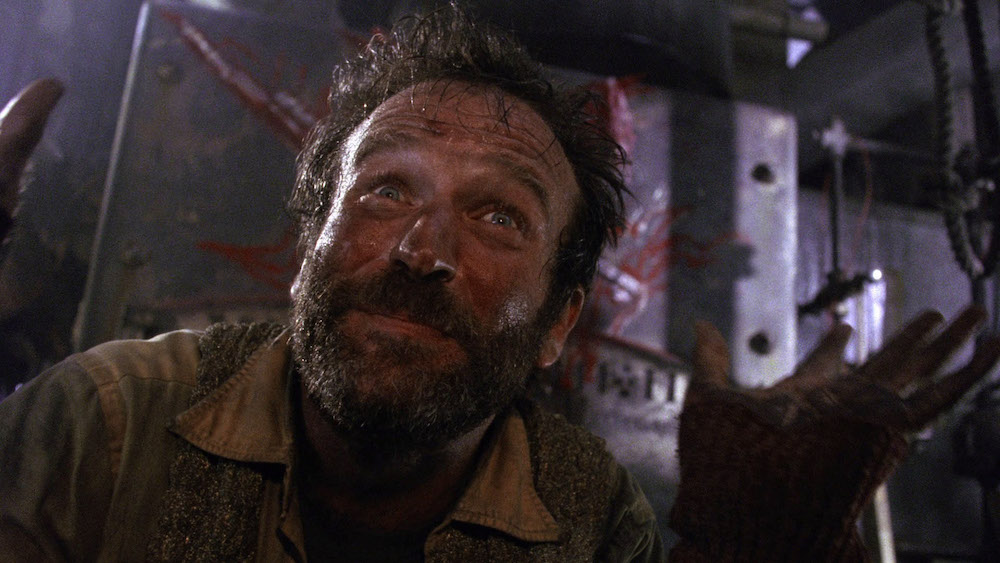 Jack Lucas (Jeff Bridges) is a controversial ‘shock jock’, whose misanthropic radio show had made him a New York sensation. He’s driven around in limos, his face adorns billboards and newspaper ads, and he has a luxury corner apartment where he can look down on his kingdom below. Snap’s “I’ve Got the Power” is prominent on the soundtrack in these early scenes, immediately dating The Fisher King, while also working as a not-so-subtle statement about Jack’s feelings about himself.

Unfortunately, Jack’s high life comes crashing down to earth when a comment he made about yuppies inspires a deranged listener to commit murder-suicide in a Manhattan restaurant. A few years later, Jack’s situation is very different: he’s at ground level mixing with the hoi polloi, helping his girlfriend Anne (Mercedes Ruehl) run a video rental store, barely getting through each day thanks to alcohol and depression. Things get so bad that he ties cinder blocks to his ankles one night, intending to take a dive into the Hudson River, before being saved by a vagrant called Parry (Robin Williams). His bearded Good Samaritan, as we’ll soon discover, isn’t exactly compos mentis, as Parry is occasionally chased around the city by an imaginary Red Knight on horseback, and believes he needs Jack’s help to steal the mythical Holy Grail from a rich architect’s castle-like home. The two men also share a surprising, tragic connection… 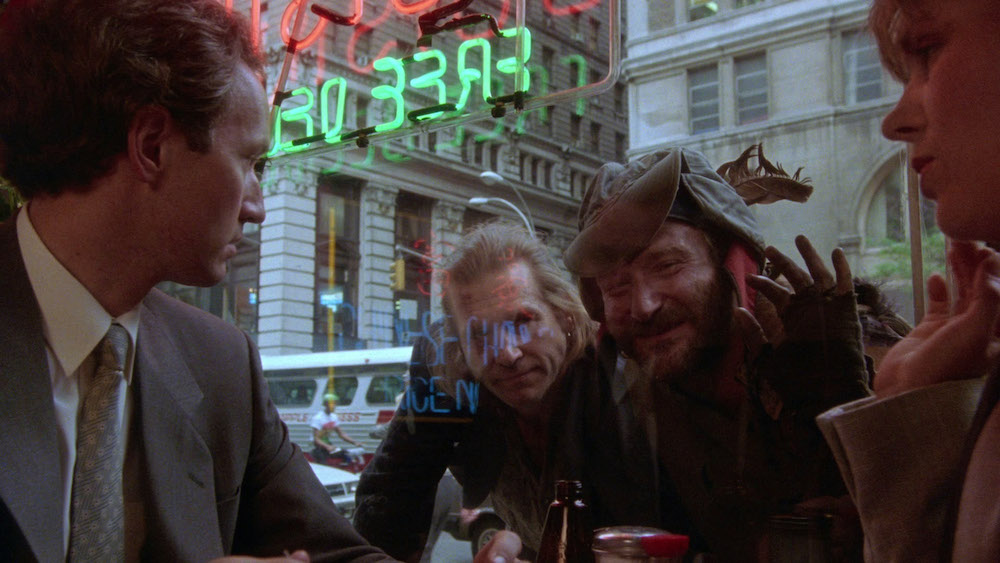 The Fisher King contains ingredients that feel like a typical Gilliam movie, and in the beginning it seems the story’s going to embrace its magical realism elements… but those flights of fancy gently subside. The story becomes more straightforward in act two, but remains enriched by beautiful moments as Gillian lets bits of magic creep back in; perhaps best demonstrated during a sequence where hundreds of Grand Central Terminal commuters start to dance a waltz. You couldn’t have picked a better movie for Gilliam to surprise his fans and regain his footing, assuring studio bosses and investors that Baron Munchausen’s failure was a one-off. Of course, in the decades since this movie’s release, Gilliam’s continued to struggle with projects that don’t get off the ground (Watchmen), appear to be “cursed” during filming (The Man Who Killed Don Quixote, The Imaginarium of Doctor Parnassus), or don’t work as intended (The Brothers Grimm).

This is really the story of two damaged men, who bond and help each other move beyond the emotional weights holding them down. Jack is selfishly angry his skyrocketing career in showbiz crashed-and-burned, but also disturbed a silly rant led to the death of innocent people. Parry also lost someone close to him (to say more is a spoiler), and the tragedy has likewise turned his life upside down. He’s fallen down a bigger social crack than Jack, becoming homeless and fighting mental illness, with the “Red Knight” appearing as a symbol of the bloodshed that ended his marriage. But, together, they help one another move through to a new and healthier existence. Parry’s insistence that the Holy Grail heals wounds sounds like madness, at first, but in a sense that’s exactly what the Biblical cup achieves. It’s just that the wounds aren’t those you can see. And for Jack, helping Parry connect to a shy accountant he’s taken a fancy to, Lydia (Amanda Plummer), offers him a chance of redemption he never thought he’d get. 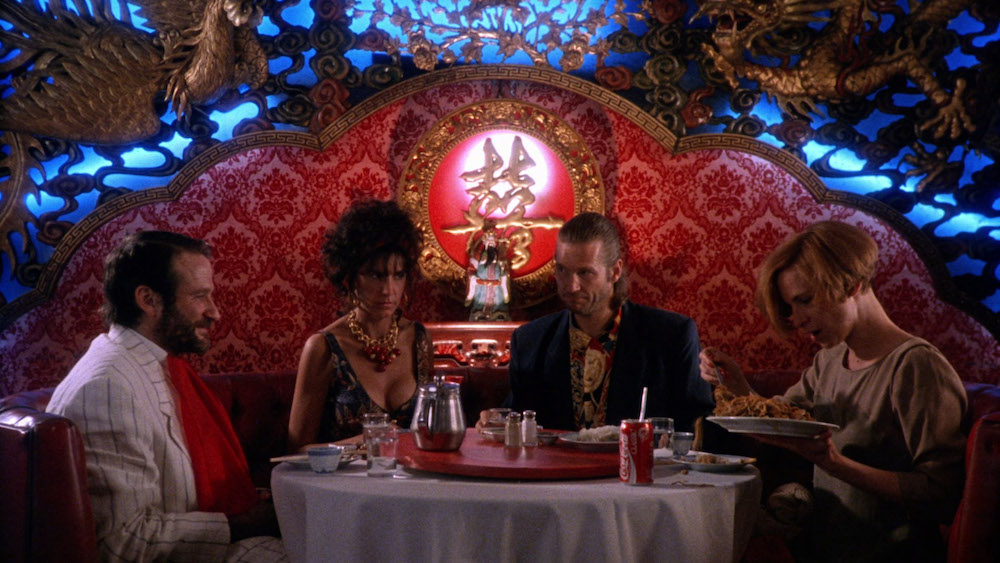 The performances in The Fishing King are excellent. Bridges is wonderful as a blowhard who gets a tough wake-up call, and watching him rediscover his humanity through kindness and patience with Parry is genuinely life-affirming. Williams is also really good as a loose cannon for Jack to deal with, beginning as a half-crazed man obsessed with a Biblical myth, then segueing rather beautifully into some incredibly touching moments of drama. One of the highlights is Parry’s heartrending declaration of love for Lydia, on the doorstep of her brownstone, convincing her that his feelings are genuine and he doesn’t want to be the one-night stand she’s resigned herself to. Little wonder Williams was nominated for Best Actor at the Academy Awards that year.

Strangely, the only member of the cast who took home an Oscar was Mercedes Ruehl as Anne, who puts up with her boyfriend Jack’s character flaws out of love he never reciprocates. Ruehl’s an actress many won’t have heard of today, and a glance at IMDb reveals her work on The Fisher King was her early crowning achievement. She followed this up with Lost in Yonkers (1993), but for whatever reason fell off the pop culture map in the ‘90s. It seems a crying shame, as she’s so natural and likeable in this movie. 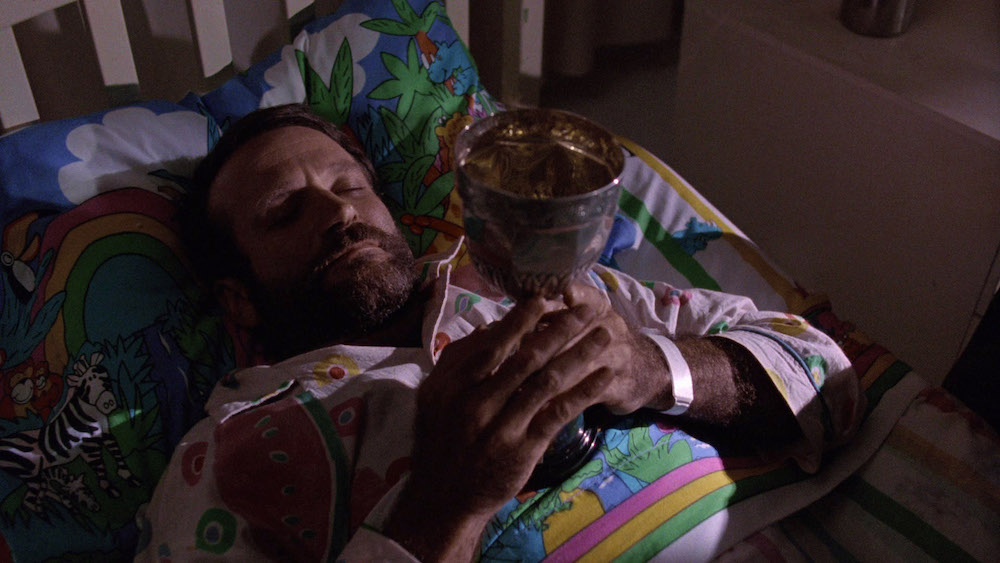 This is really quite a wonderful movie. Gilliam’s oeuvre has its highs and lows, but The Fisher King often gets overlooked by people drawn to his movies for their surreal imagination and satirical bite. This is probably because it’s a stylistic outlier that doesn’t feel like any of his other movies. It’s one of the best movie he’s made, maybe the best, but its tone isn’t especially “Gilliamesque”, so his fans rarely bring it up. The closest parallel I can draw is Tim Burton’s Ed Wood (1994), which is likewise a towering achievement the director’s fanbase will never love as much as Edward Scissorhands (1990) or Beetlejuice (1988).

The Fisher King was only a moderate hit with audiences in 1988 (making back double its $24m budget), but it got Terry Gilliam out of director’s jail in short order. He wouldn’t make another movie for four years, as projects like The Defective Detective and a version of Charles Dickens’ A Tale of Two Cities got stuck in development, until the release of 12 Monkeys (1995). But perhaps most frustratingly, he’s never really made a movie this levelheaded and emotionally rich since. 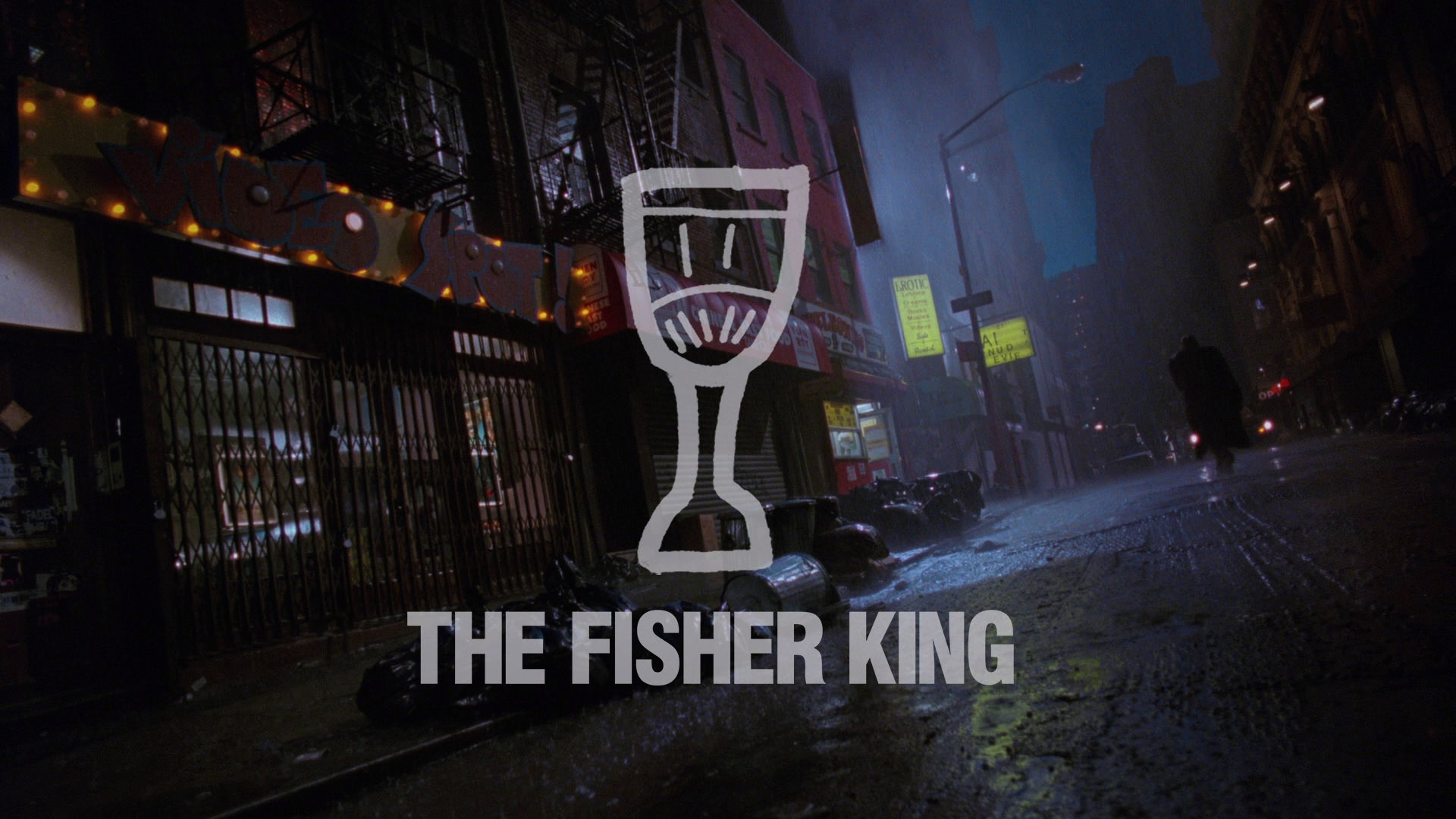