Waterworld still evokes feelings of cinematic misfortune, two decades after the post-apocalyptic action film’s summer release, but time’s been kind to this 1995 ‘flopbuster’. Indeed, despite its dismal reputation (earning itself nicknames like “Fishtar” and “Kevin’s Gate”, alluding to fiascos Ishtar and Heaven’s Gate), there are much bigger financial and creative disasters.

Until James Cameron’s similarly aquatic Titanic was launched in 1997, Waterworld was the most expensive film ever made; with a hefty $172m price tag it struggled to recoup through native U.S box office taking of $88m, although overseas success boosted that figure to $264m. 20 years of home video and TV broadcast deals have now ensured Waterworld’s recovered its costs, but what never recovered are the careers of some people involved.

For those unaware, Waterworld is set in a far-future where the polar ice caps melted and sea levels rose so all land was flooded—a backstory cleverly established in the opening sequence, where the blue water covering Universal’s globe logo submerges the green continents, as the camera zooms down to locate our antihero ‘the Mariner’ (Kevin Costner), recycling urine aboard his tricked-out trimaran. Humanity survived this unimaginable ecological disaster, but our existence has become a ‘Mad Max on water’ daily struggle—with people living together on rusting metal atolls, or aimlessly sailing the oceans searching for mythical Dryland. A nomadic way of life that turns some people mad.

The world-building of this film is actually very cool and the best thing about it, provided you don’t ask too many questions—like how are folk replenishing their ammo, or refuelling their jet skis? That said, the eventual arrival of notorious real-life oil tanker Exxon Valdez, filled with enough crude for the villainous ‘Deacon’ (Dennis Hopper) to run his army of ‘Smokers’, does enough to make you presume there are other container ships filled with leftover hardware to keep humanity plodding along. Hey, maybe it all makes more sense than first impressions suggest! 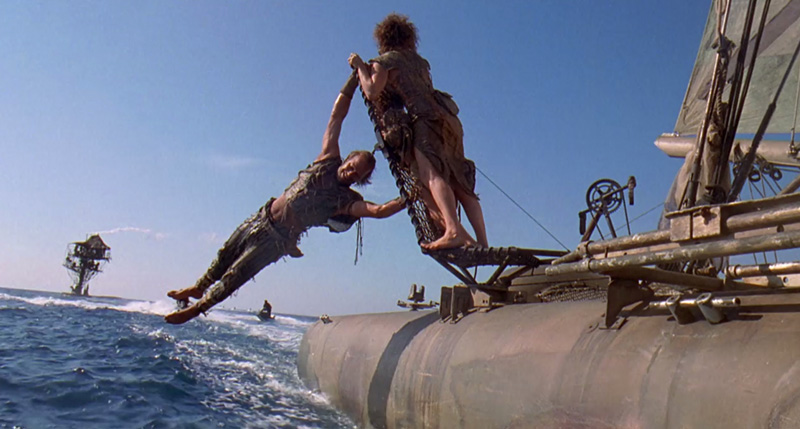 I also loved how potting soil has become currency because of its scarcity, and how there’s an unwritten code to exchange items when you encounter another sailor on the open water. For the most part, things felt plausible enough to buy into some of the crazier conceptual what-ifs, and there are plenty of amusing and clever touches sprinkled throughout Peter Rader and David Twohy’s script. The latter of whom wrote 1993 smash-hit The Fugitive and would soon script G.I Jane, before launching his own sci-fi universe with the Pitch Black/Chronicles of Riddick movies.

The plot of Waterworld is incredibly simple, once you peel away the trappings of its aquatic environment. The Mariner is acquainted with beautiful Helen (Jeanne Tripplehorn) and her young daughter Enola (Tina Majorino) during an attack on their atoll by the Deacon’s gang, and after escaping with them comes to realise the little girl’s back has a tattoo giving the location of Dryland. The Mariner’s an outsider who doesn’t enjoy people’s company, but his hard shell begins to soften around these two female shipmates (teaching Enola to swim, showing Helen the submerged remains of an ancient city in a homespun diving bell), and by the end he’s grown into a heroic father-figure and decent husband material—who nevertheless can’t change his reclusiveness and calling for the sea. Indeed, in one of the film’s best ideas, we discover the Mariner’s an amphibious mutant (having developed gills behind his ears thanks to evolution). I wish more had been made of his superhuman, Man from Atlantis-style swimming abilities.

The failure of Waterworld at the 1995 box office is interesting to reflect on, perhaps because it signifies a time when audiences weren’t so easily drawn to the promise of spectacle from enormous budgets. Apollo 13 was the third biggest film of the year; telling a true story on a relatively modest $52m. Competition wasn’t particularly strong around the time Waterworld was released on 28 July, either, with inauspicious movies like The Net, Free Willy 2, Under Siege 2, Judge Dredd, and Species. You have to wonder why so few people turned out for a comparative extravaganza like Waterworld (although it became the ninth most successful movie that year, let’s not forget), and I think it’s a combination of factors… 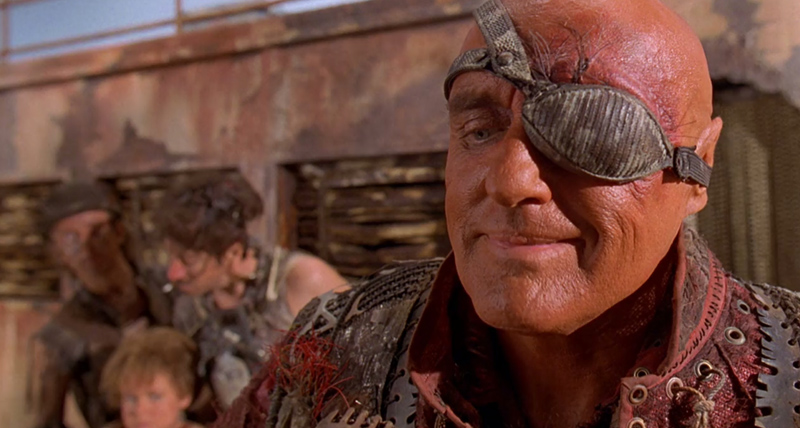 Don’t just stand there, kill something!

Kevin Costner’s star-power was beginning to dim after Dances with Wolves (1990) and the following year’s double-whammy of Robin Hood: Prince of Thieves and JFK. The Bodyguard had been his last popular hit in ’93 before Waterworld‘s release—which sadly marked a shift towards Costner losing his A-list status. His star-power was irrevocably downgraded by the time 1997’s The Postman belly-flopped even harder than Waterworld (post-apocalyptic scenarios are Costner’s anathema), pushing this once-popular actor into modest releases and mentor/father supporting roles.

The story of this film’s production is more interesting than anything the screenwriters dreamed up. Director Kevin Reynolds and Costner had already collaborated three times on Fandango (1985), Robin Hood: Prince of Thieves, and Rapa Nui (1994), but Waterworld was such a torturous experience it marked the end of their professional relationship until a reconciliation led to 2012 miniseries Hatfields & McCoys.

The budget of Waterworld spiralled above Universal’s initial $100m outlay (partly because a very expensive set collapsed during an offshore hurricane), and actor-producer Costner found himself working six-day weeks for 157 days, while helping fund the film using $22m of his own fortune. You’d feel sorry for the man, until you learn he was living in an oceanfront villa costing $4,500 per night during the filming, while the hardworking crew had to make do with uninsulated condominiums. That couldn’t have endeared him to people on set.

Numerous health and safety issues arose during production, too. Costner almost died whilst tied to his trimaran during a squall, a stuntman was lost at sea for hours, a stunt co-ordinator got compression sickness, the crew battled regular 45 mph winds that played havoc with sets, and child star Tina Marjori was bitten multiple times by jellyfish. Costner then fired composer Mark Isham (claiming his original score was “too ethnic”) and replaced him with James Newton Howard, before then-script doctor Joss Whedon spent seven weeks providing ad hoc changes to the screenplay. Things got so bad that Reynolds is believed to have walked off set two-weeks before filming was supposed to end; although other sources say he was fired by the increasingly frustrated Costner, who decided to complete filming himself.

Kevin [Costner] should only star in movies he directs. That way he can work with his favourite actor and favourite director. — Kevin Reynolds

With such tales of onset chaos and danger, it’s amazed the finished Waterworld is as good as it is. While it may not have enticed big audiences back in the day, it’s hung around the fringes of pop-culture. The film may still be considered a misfire, but a tie-in Universal Studios theme park attraction is still going strong in three locations around the world (Hollywood, Singapore, Japan). Given the fact George Miller resurrected his Mad Max franchise to unexpected success this year, it would be interesting if someone was brave enough to give the Waterworld concept another go.

Its concern for global warming feels like something audiences would respond to more positively today. And purely on a technical level, Reynolds film was made at a time when CGI had only just begun to expand the options available to filmmakers needing to create believable fictional worlds. There’s digital trickery here and there in Waterworld, but most of it looks quite false to modern eyes. The core of the film is still very 1980s in its use of practical effects, which is cool because everything looks and feels real, but things can be done a lot safer and cheaper with the photorealistic water effects we’re used to seeing since The Perfect Storm (2000). Maybe with more distance and cultural reassessment of the finished article, a remake would be something that wouldn’t sink without trace. 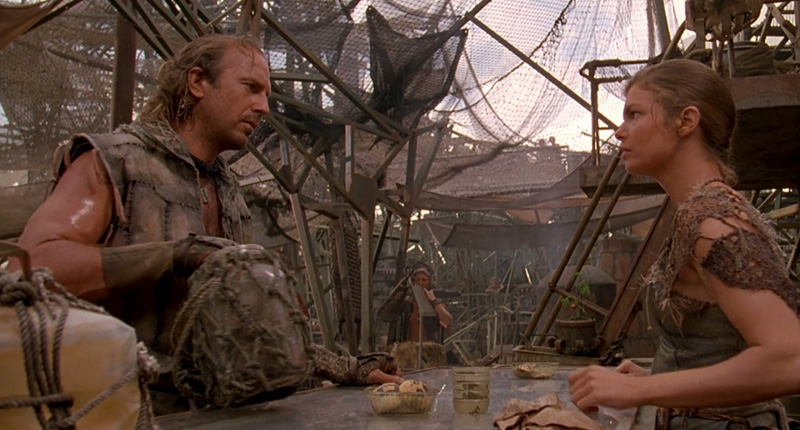 Before they were famous: