On average, 14 new films hit US cinemas each week. Some on just a few screens, some a few hundred, but only about a third are released on thousands. If you judge movies by ubiquitous they are, you’re missing some of the best. Still, not even those who make a living critiquing cinema can see them all. So, how do you decide which ones to see?

Easy. You listen to trustworthy people who’ve seen them already. And this week, those in the know say go see Thoroughbreds. It features two rising stars—Olivia Cooke and Anya Taylor-Joy— in what are undoubtedly their best performances and juiciest roles yet. Given their already excellent filmographies, that’s no small statement…

Olivia Cooke played Rachel, the titular dying girl in Me and Earl and the Dying Girl (2015); a teenager isolated by a possibly fatal illness, whose well-meaning busybody mother conspired with another meddler to coerce a boy she barely knows into spending time with her as the disease progressed.

Some of us know Anya Taylor-Joy from her coming-of-age role in 17th-century horror drama The Witch (2015). But while critics loved this low-budget folk horror and praised Taylor-Joy’s performance in particular, audiences were less interested in a grim tale of woodland witchcraft, and it never secured a wider US release. We next saw her sharing a claustrophobic screen with James McAvoy’s multiple personalities in M. Night Shyamalan’s Split (2017), a movie in which Taylor-Joy’s taut performance as a kidnap victim pushed her co-stars into the background. 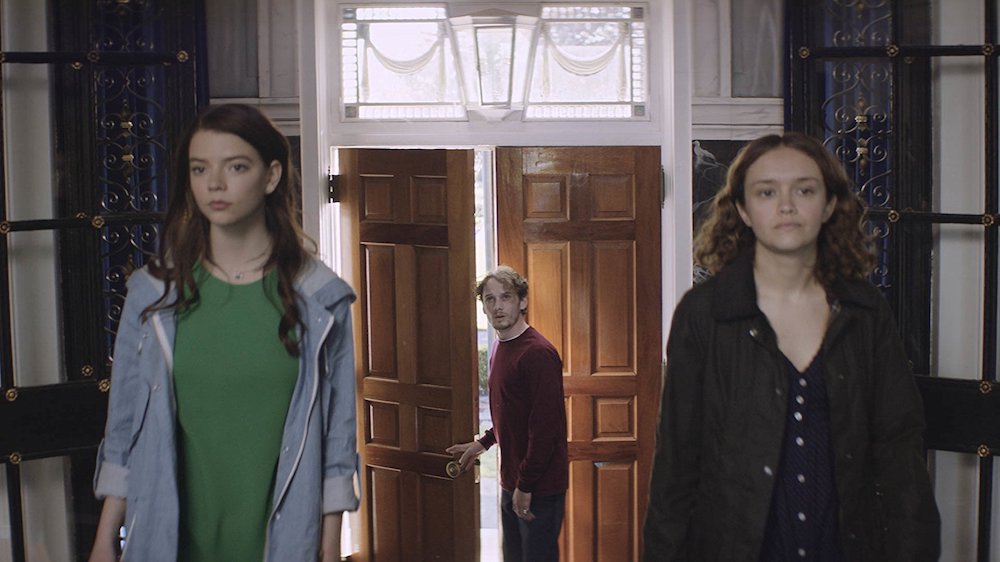 The dystopian-future-teen-angst wave may not have swallowed them up as it did Shailene Woodley after The Descendents (2011), but that doesn’t mean Cooke and Taylor-Joy can’t hold the screen. They do for almost all of Thoroughbred’s 90-minutes; most of which find Cooke and Taylor-Joy alone together, doing very little, but we nevertheless can’t look away.

Paul Sparks, Francie Swift, and Kaili Vernoff each appear for a minute at a time, as Cooke’s and Taylor-Joy’s parents, entirely believable as frustratingly unaware planets circling the twin stars of our leads, a condition so obviously untenable Sparks’ character even remarks on it at one point in the film.

The only exceptions to the lead’s dominance are those magic moments when they’re forced to make room for the late Anton Yelchin, moments he steals, in spite of his character.

The film’s plot, the excuse we need to watch these three wonderful performances, has, as do all good plots, a twist, but don’t imagine you’re going to connect dots, or see self-righteous people solve social problems, or see super-people save the world. The story is remarkably small and contained, with no sex, minimal drug use, and almost no violence. What appears on the screen is less violent, and for kids, less scary than most PG-13 flicks. 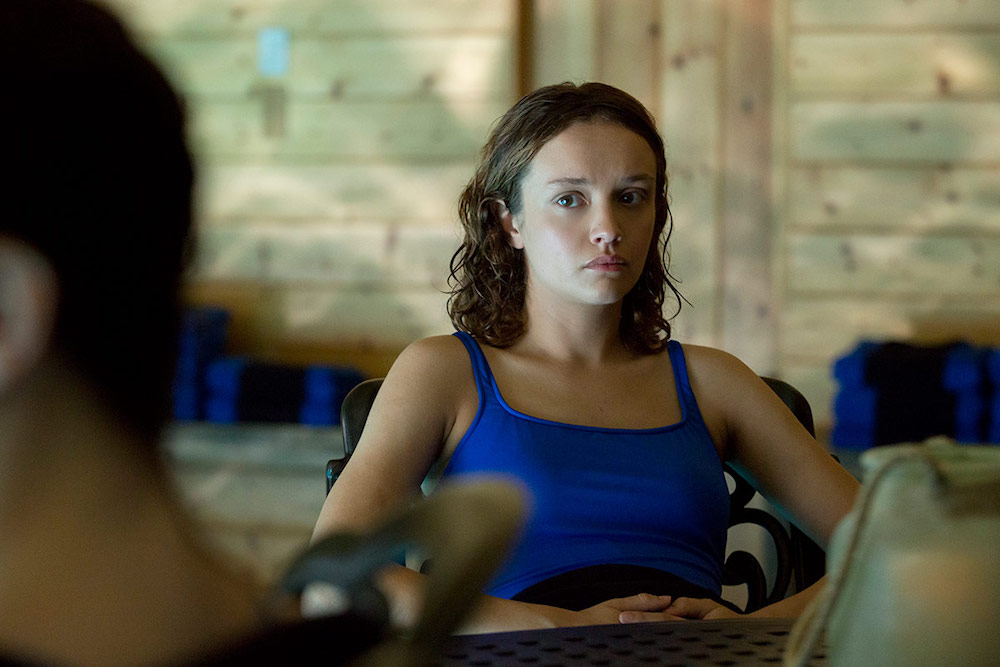 However, if you’re an adult, this one will leave a mark. It earned an R rating from the MPAA, but not because of what you see, but because of how you’ll be left feeling afterwards. If you’re a parent, you may never again see your children in quite the same light. What you’ll see are three incredibly talented young actors fully holding your attention while doing, by modern film standards, almost nothing.

As the film opens, we find Amanda inappropriately snooping through Lily’s impressive Connecticut horsey set home. While Lily, whether as a power tactic or out of dread, delays seeing her. Their almost-adult playdate seems at first like pair of privileged one-percenters studying for college admissions tests. Not so. Rather than studying literature, Amanda studies Lily, trying to decide the basis for resuming an old friendship, while knows her mother’s paying Lily to spend time with her.

And because she’s remarkably forthright, she lets Lily know she knows. We’re startled by Amanda’s blunt honesty, but not put off, because we sense in her vulnerability instead of malice. What does put us off is Amanda’s complete lack of expression, something Cooke manages to pull off throughout the film.

For those who think acting is simply repeating memorised lines in front of a camera, this film will enlighten you. We spend 90-minutes watching a teenage girl wearing the most stoic of poker faces, displaying no emotions at all because, as she informs us, she feels no emotions. She’s schizoid and only manufactures them to seem more normal to others. 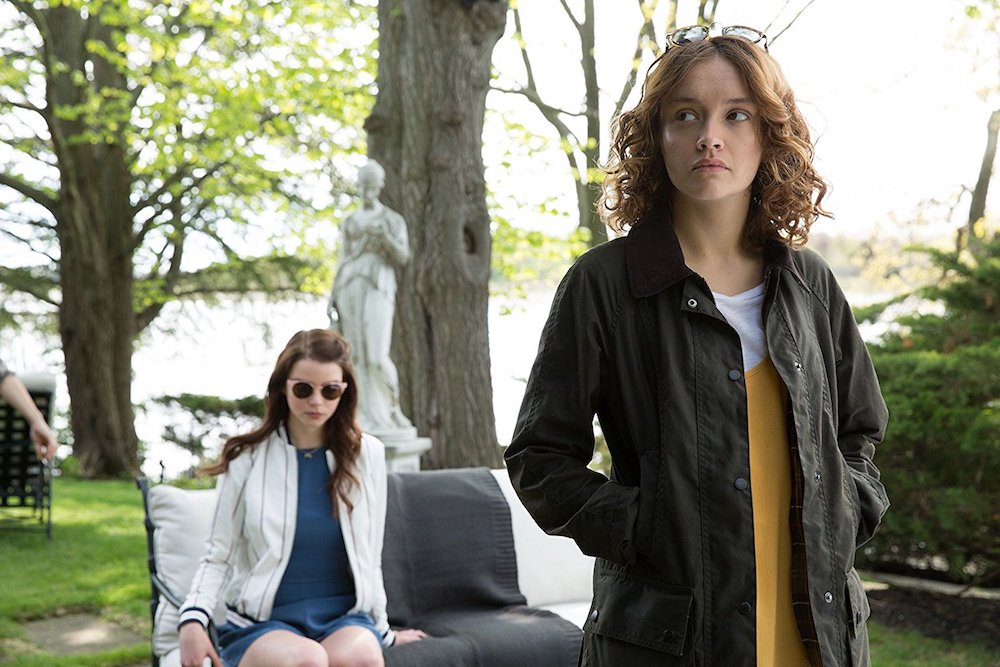 And while we’re more than a little nervous about Amanda’s inscrutable mask , we let down our guard for Lily, who reacts as do we, exactly as do we, and we soon understand why: Lily knows Amanda’s killed her mother’s thoroughbred horse. In Amanda’s mind it’s a mercy killing. In all other minds, including Lily’s, it was an act of horrific cruelty. So, when Amanda nonchalantly brings up the idea of killing Lily’s wealthy stepfather, we’re less surprised at her words than we are she’s not already in jail for doing something very much like that which she suggests.

Lily’s startled denials and refusals to entertain the idea seem entirely natural to us, and perhaps to her, for awhile— and then they don’t. But, this isn’t something they want to do on their own. Enter Anton Yelchin, who shines as Tim — the girls’ uneducated, apparently streetwise, friendly neighbourhood drug dealer — whom Lily only knows in passing. But an acquaintance is all these girls need, as Tim finds out…

If we didn’t take our teen queens seriously before, once they’ve finished with Tim, we sure do. 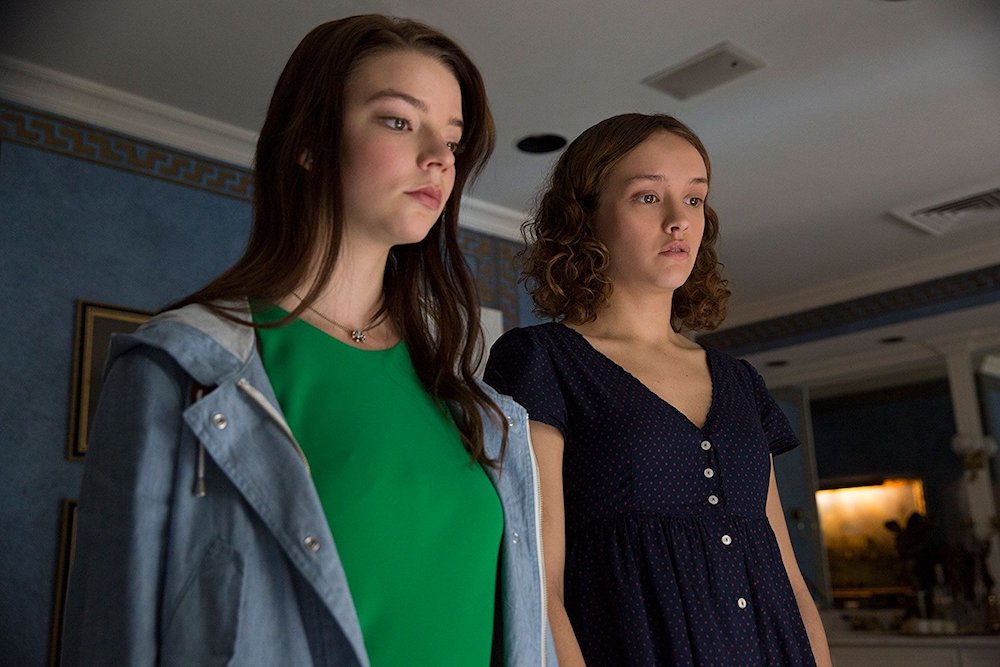 Cory Finley writes and directs Thoroughbreds, doing unrepeatable magic with its modest $5 million budget. He and Olivia Cooke turned an attractive, expressive young woman into an unattractive, completely inexpressive, almost stunningly emotionless shell of a human being. And although Anya Taylor-Joy retains the apparently wholesome, soft, youthful attraction with which she seduced us in The Witch and Split, seizing every chance to seduce us again, in the end, we find ourselves caring about Amanda… and wishing she’d been able to feel at least one emotion.

How long Thoroughbreds will run in US theatres is anyone’s guess, but go see it. Olivia Cooke is starring in Steven Spielberg’s Ready Player One (2018), with Anya Taylor-Joy part of The New Mutants (2019) and returning for Split’s sequel, and by then these talented actresses will likely be priced out of small dramas. They’ll have followed Jennifer Lawrence’s career trajectory of playing glamorous caricatures in big-budget tentpoles instead of believable characters.

And, since he tragically died weeks after filming wrapped on Thoroughbreds in 2016, this will be your last chance to see Anton Yelchin turn a supporting character who appears to be a pathetically unappealing loser, into someone relatable you’re drawn to. Someone who, by the end, you’ll find yourself missing more than ever before.