Halfway through season one, Jessica Jones threw audiences for a loop with Kilgrave’s (David Tennant) creepy purchase of Jessica’s (Krysten Ritter) childhood home, and lover Luke Cage’s (Mike Colter) big realisation of her betrayal. For season two, it seems like the writers are following the same formula, making “AKA Facetime” one of the most plot-heavy (and messy) episodes. This hour highlights the problems with shows that run chronologically; sometimes, we have to see numerous different things happen all at once, which might be realistic, but it’s definitely not so enjoyable to watch.

We start off with Jessica running out of the aquarium and unsuccessfully chasing after the mystery woman and Dr. Karl (Callum Keith Rennie). Lamenting her family’s inability to be loved anymore while “the creep and the maniac have found happiness together”, she spots a large ring on Dr. Karl’s finger in the photos she took, giving her a lead to chase. Feeling lonely, she then goes to Oscar’s (J.R Ramirez) house to have sex. The purple paint they have sex on is a clear Jessica Jones-style hint, as is the fact that Oscar seems like the perfect boyfriend — so far. Something is likely going to break the love bubble soon, and with the purple tones on display here, a good guess would be the long-awaited return of a certain mind-controlling villain… 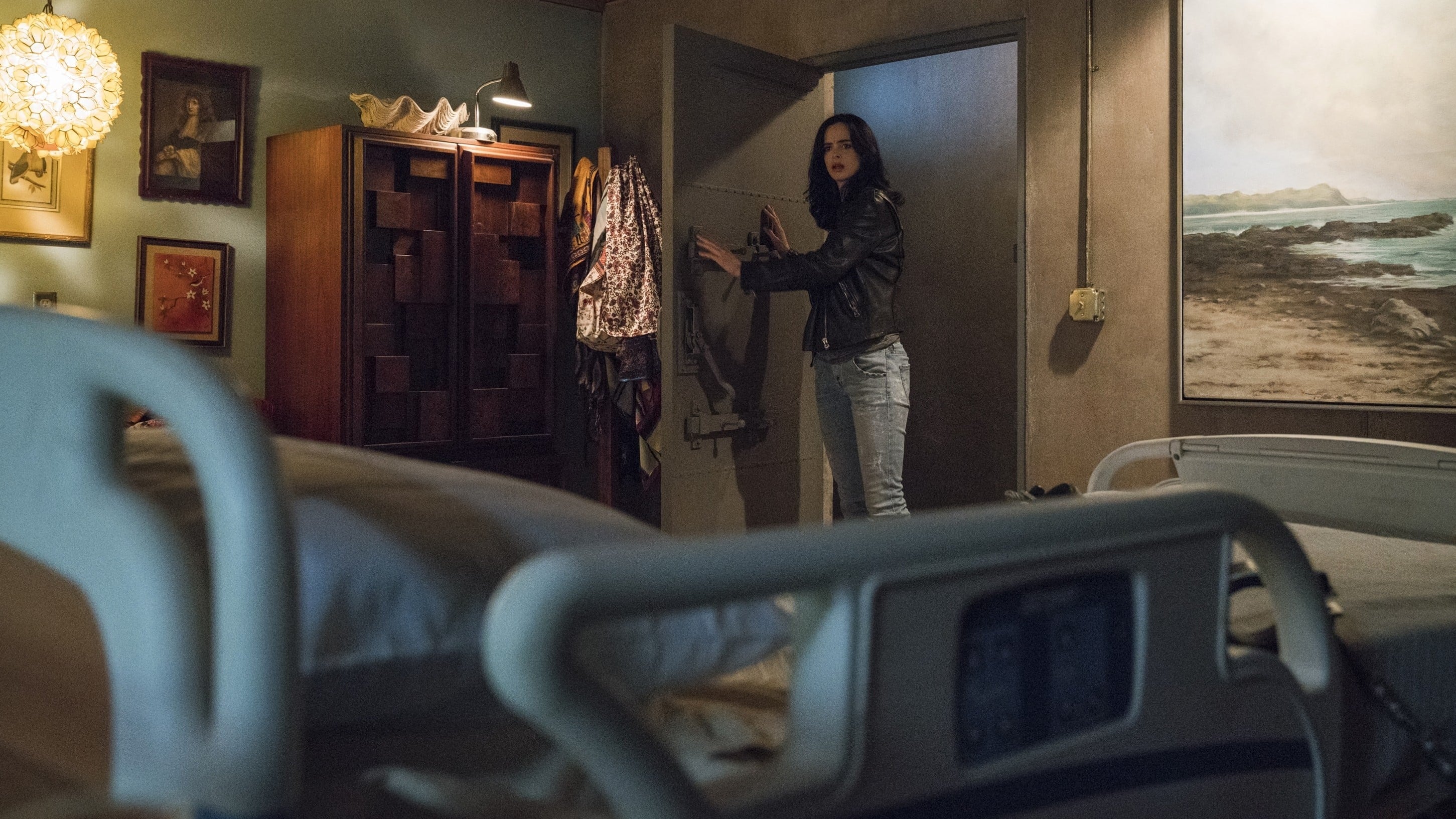 The next day, Jessica and Trish (Rachael Taylor), who’s red-eyed and suffering from the bloodlust-like effects of the stimulant, go back to the scene and enter a shop with security cameras. One thing that Jessica Jones does well is the constant inclusion of social issues; here, the shop owner’s worried about his family as he’s not a US citizen, and hence unwilling to help the pair even as Trish offers a bribe.

We eventually find out that Dr. Karl and the mystery woman fought right outside the shop, and that Dr. Karl had to drug her to get her into a car. Jessica then says the line we’re all thinking: “a powered woman used as a weapon? Déjà Vu sucks ass.” 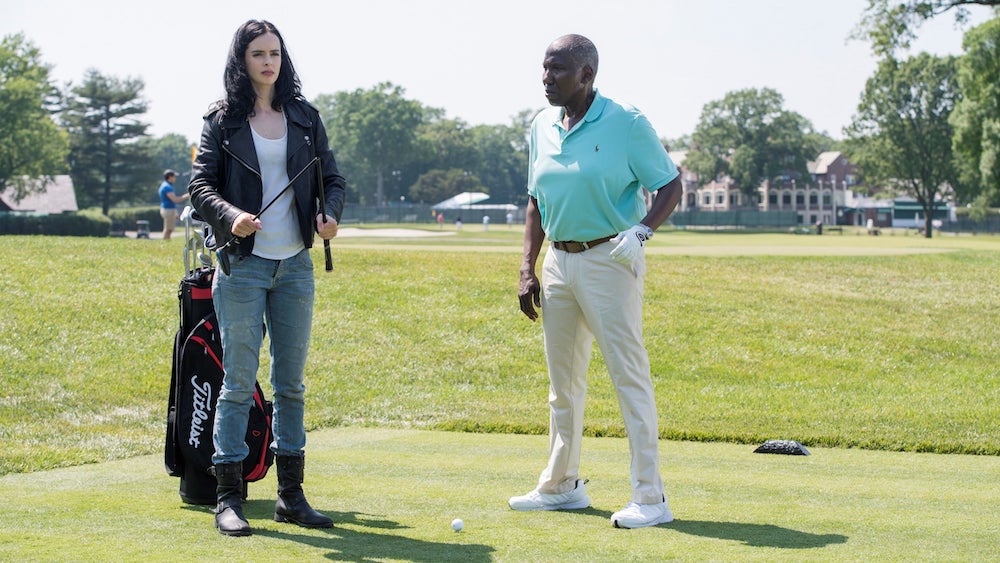 Malcolm (Eka Darville), on the other hand, is digging into his past as well. He recognises the ring on Dr. Karl’s finger as a class ring from his own college, so Jessica sends him there to get information. It turns out Malcolm dropped out of college because of his drug addiction, so he’s understandably nervous as he meets his ex-girlfriend, who’s in her final year at the school. Malcolm’s learning quickly as a private investigator, though, as we see him swipe his ex-girlfriend’s access pass to get the 1978 yearbook that features Dr. Karl Malus as a genetics graduate.

That new information leads Jessica and Trish to a fancy golf club, where Jessica confronts a member, Justis Ambrose (Mel Johnson Jr.), who used to pay for Dr. Karl’s expenses. Justis tells Jessica of his friendship with Dr. Karl and how his son, suffering from a genetic disease, was healed by Dr. Karl’s experiments. Justis then calls to warn Dr. Karl about Jessica as Dr. Karl wakes up the mystery woman and releases her from restraints with a ominous “Jessica’s coming. I think it’s time.” 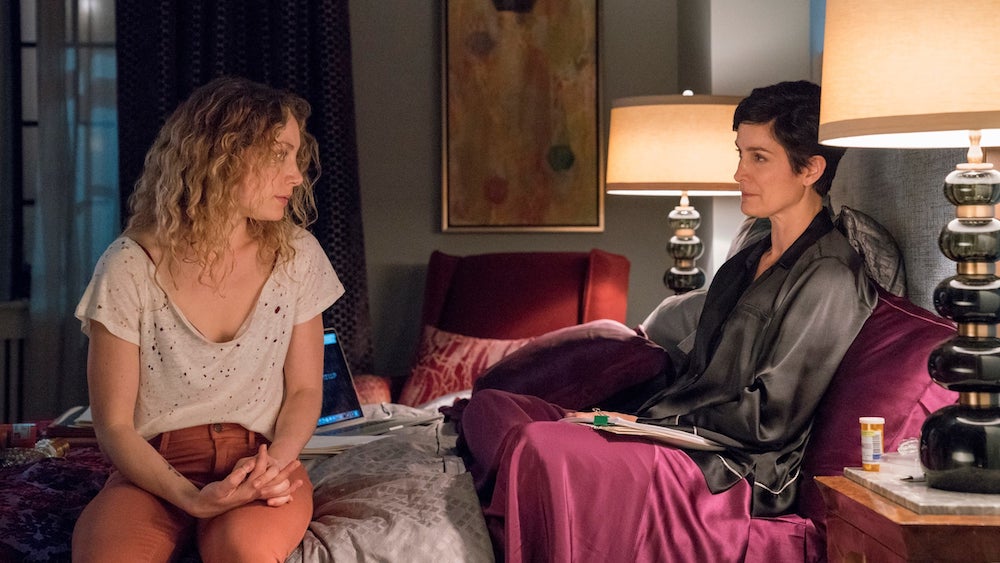 While this is happening, Jessica’s bringing Trish home as her friend suffers from withdrawal. Jessica shows concern, but is oddly appeased when Trish, exhibiting clear addiction problems, chases her away. Malcolm, whom we learn has a crush on Trish, then unwittingly finds the inhaler in Trish’s jacket and comes over to return it. Cue a face palm moment for viewers as Trish, in a moment of ‘just-inhaled’ over-stimulation, kisses Malcolm and ends up sleeping with him.

If you think this is it, you’re wrong, as “AKA Facetime” then decides to squeeze in an introduction to anther important character, as Inez (Leah Gibson) tells Jeri (Carrie-Anne Moss) about a previous patient at IGH that gained the powers to heal people. As we finally get to the last scene of “AKA Facetime”, Jessica Jones’ tendency to close up on Ritter’s face comes into use, as we see Jessica run the gamut of emotions as she recognises objects from the mystery woman’s house, whose location she got from blackmailing Justis with his son’s safety.

It then, disappointingly, veers so deeply into television stereotypes that we only need one line to explain this annoying cliché of a plot twist: The mystery woman takes off her wig and says hi as Jessica questions “… Mom?” 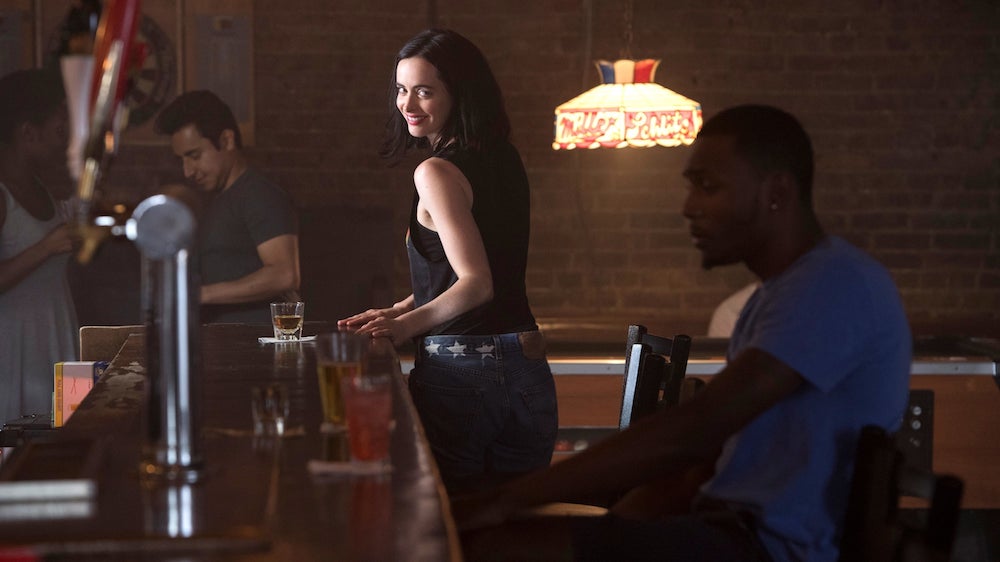 “AKA I Want Your Cray Cray”

Flashback episodes are always a combination of illuminating and depressing. In “AKA I Want Your Cray Cray”, Jessica Jones test the limit on the depressing end, with a flashback episode we didn’t know we needed. It begins with the messy “Luke, I am your father”-style cliffhanger that ended “AKA Facetime”, but by condensing the number of plots down to one, “AKA I Want Your Cray Cray” becomes one of the best episodes of Jessica Jones thus far.

In this instalment, we see how the mystery woman, now unmasked as Jessica’s (Krysten Ritter) mother Alisa (Janet McTeer), has led her life after waking up after the family’s car accident. We start by clearing up a question raised in “AKA Start at the Beginning”: who was the monster?

We find out that Alisa was severely disfigured in the crash, which handily explains why Jessica didn’t recognise her. As Alisa wakes up in IGH and saw her monstrous face, she goes on a rampage, grabbing and pushing everyone in her path, including a girl in the corridor, who was a young Jessica. Karl (Callum Keith Rennie) has to drug her to stop her.

Alisa is then restrained in a bed, and introduced to Karl and Dr. Leslie Hansen, the trauma surgeon who had brought both Jessica and Alisa to Karl. Since Alisa’s healing process (due to some genetic editing) was far more extensive than Jessica’s, Jessica was returned to the hospital in 20 days while Alisa stayed at IGH for 5 years. After each treatment, Alisa would have extreme mood swings, leading Karl to drug her after each treatment. When Karl tells her that Jessica was adopted (without showing side effects when she was discharged) and told that her entire family had died, Alisa gets agitated and has to be drugged again with Karl telling her “you can’t see her”.

Of course, this means that Alisa is even more insistent on finding Jessica, leading to the scene where she breaks out of IGH, murdering Luane and hurting Inez in the process.

While all of this is happening, we see Jessica and Trish, back when Jessica was still in college and Trish was a deluded pop star. Krysten Ritter and Rachael Taylor are heartbreakingly perfect in “AKA I Want Your Cray Cray”, with the former showcasing the young innocence of social introvert Jessica. At that stage, Jessica couldn’t even down one shot at a club, and was begging her sister Trish to go home with her so she could study.

Trish, however, is in the throes of addiction and rejects Jessica’s suggestion that she has a problem. When Jessica accuses Trish’s friends of mooching off her and leading her astray, Trish turns that accusation back on her (as Trish is paying for Jessica’s tuition), leading to a falling out.

Jessica then meets a former bartender who worked at that club, and ends up with him. Yes, hard-nosed Jessica Jones fell in love, as we see her head-over-heels for Stirling (Mat Vairo), stealing items to fund their lifestyle. He knows about her powers, so when he says he wants to get her a jacket in a window display, she casually breaks in and steals it, in the process answering one question for all the fans: why does she always wear that same leather jacket?

Another question that gets answered: where the name ‘Alias Investigations’ comes from. It seems like Stirling was trying to open his own club, ‘Club Alias’, and needed investors. He convinces Jessica to let him meet Trish so he can give her a business proposal. He fell into debt with another ‘investor’, and Jessica, in a fit of anger, beats up the gang members to protect Stirling, her “only family I have now”.

At this point, Alisa, with the unknowing help of Trish’s mom Dorothy (Rebecca De Mornay), has located Jessica at a bar, and sees her happy and smiling with Stirling. While Jessica’s in the toilet, Stirling’s called outside by the gang members who want him to convince Jessica to be their muscle in exchange for the erasure of his debt. Stirling agree but is cornered by Alisa, who heard the entire conversation, and Alisa, in a fit of rage, kills him. The scene where Jessica finds Stirling’s body and wails in pain? Heart-rending in her emotion over losing her family, again.

Jessica goes to find Trish, and finding her high (again), pulls her out, tells her about the news, and makes Trish promise to go back to rehab. Alisa realises that her temper is uncontrollable, so she goes back to Karl, who promises to “make [her] well enough to see Jessica again”. It seems like she’s been hidden from sight ever since, trying to control herself.

In the last scene, as we go back to the present, we see Jessica with tears rolling down her cheeks, and Alisa asking for forgiveness. “No”, says Jessica tersely, and slaps Alisa so hard that the latter falls down. Karl then drugs Jessica as we fade to black.