Evolution is often mentioned in Shane Black’s The Predator, but the truth is every sequel to John McTiernan’s Predator (1987) can only emulate what came before, but fail because the crux of that ’80s classic can’t be replicated: suspense. The original kept its creature hidden for much of the runtime (you didn’t even see the Predator’s face until the final confrontation), but now it’s a world-famous Hollywood monster that’s appeared in two sequels and two spin-offs. This problem doesn’t leave you with many places to go, which the previous films haven’t already covered, so Black and his old collaborator Fred Dekker (Monster Squad) opt to showcase a bigger, meaner Predator, in the suburbs, and ladle on the macho quips.

The setup is both silly and needless complicated, at least in how the script awkwardly gets us to the core of its idea. Army sniper Quinn McKenna (Boyd Holbrook) scavenges Predator technology after witnessing an alien ship crash in the jungle, then mails this dangerous tech to his US home, where it’s opened by his autistic son Rory (Jacob Tremblay). Quinn’s soon captured by an agency investigating these extra-terrestrial hunters, led by Will Traeger (Sterling K. Brown), who decide to throw Quinn onto a ‘loony bus’ of other troublesome ex-military oddballs: bad-ass black Marine “Nebraska” (Trevante Rhodes), wise-cracking Coyle (Keegan-Michael Key), Tourette’s sufferer Baxley (Thomas Jane), Irishman Lynch (Alfie Allen), and a pilot with a brain injury called Nettles (Augusto Aguilera). There’s also a science teacher, Casey Bracket (Olivia Munn), hired to help Will test a captured predator sedated in a lab, who decides to join the testosterone-fuelled bus of crazy soldiers when things get out of hand. 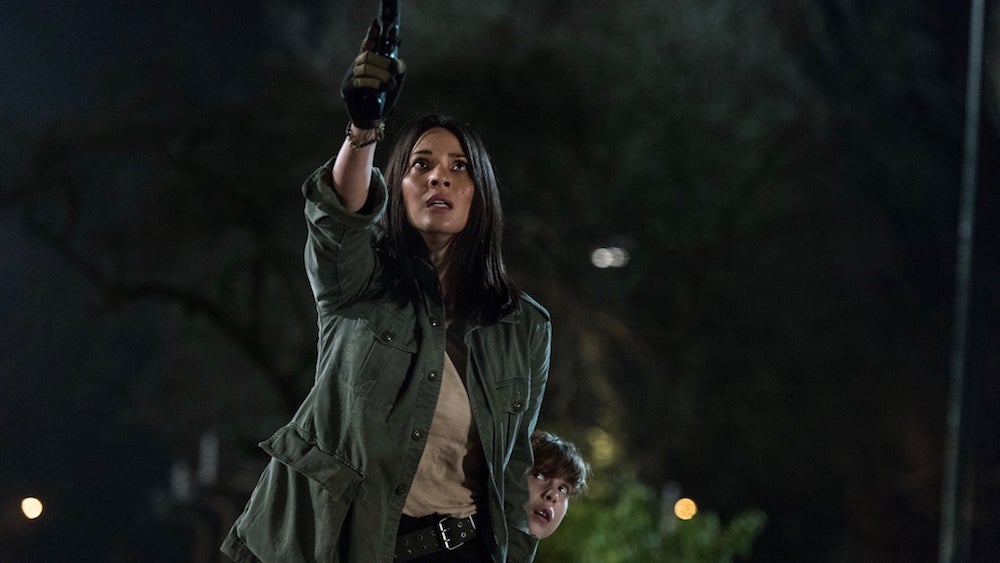 I’m sure Shane Black (who appeared in the original Predator as jokester Hawkins) had noble intentions with this movie, aiming to deliver a sequel to McTiernan’s movie that would please middle-aged fans and today’s teenagers. Black was a big Hollywood player in 1980s with his high-concept scripts for Lethal Weapon (1987) and The Last Boy Scout (1991), and became a solid director in his own right with Kiss Kiss Bang Bang (2005) and Iron Man 3 (2013), but his attempt to merge OTT ’80s shlock and ultra-violence with modern-day blockbuster franchise sensibilities doesn’t really work.

Most disappointingly, Black’s talent with dialogue and quirky characterisation fails him miserably here. The ensemble portrays a lazy mix of stereotypes with hacky relationships and forced camaraderie. Quinn’s the absent father with a loving family he does terrible things to provide for, his son’s autism is treated like a “super-power” (it’s established his kid hates loud noises, but later seems fine in the midst of a loud assault against an alien with his old man), and the “loonies” are an excruciating mix of tics and tropes. 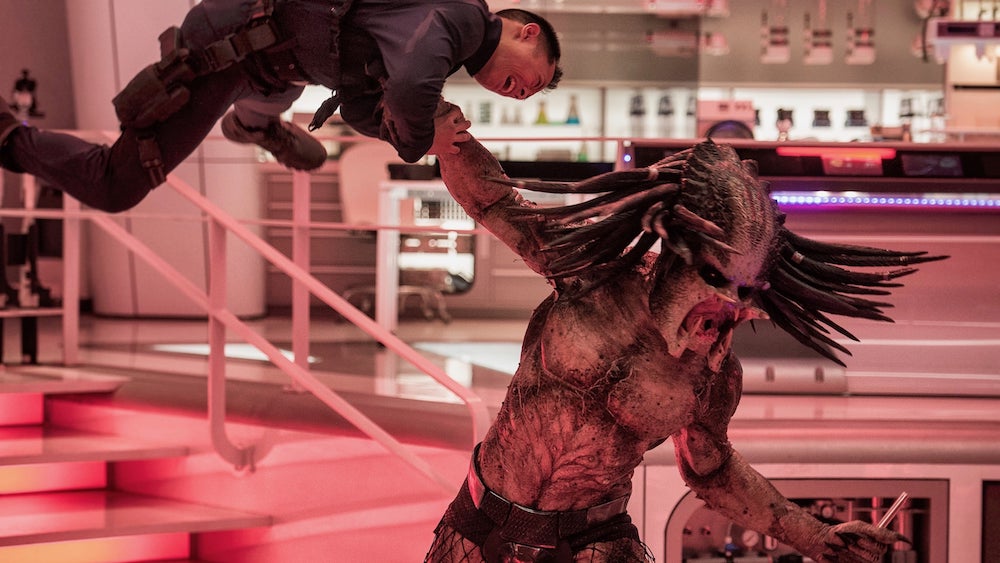 Keegan-Michael Key heinously misjudges the film’s tone with an annoying performance as “the loud funny one”; Thomas Jane tries to wring laughs from saying swear words and causing social embarrassment; Alfie Allen and Augusto Aguilera might as well not be there; and Olivia Munn gets stuck in that genre trap of playing a beautiful scientist for men to lust over. I’m only surprised she didn’t wear black-rimmed spectacles. There’s quite an ugly scene when she wakes up after accidentally tranquilising herself (silly woman), only to find herself on a bed surrounding by these idiot men who’ve done creepy things like make her a tinfoil unicorn, make bets over whether or not she’ll go for her gun, and one eventually asks if he can “eat her pussy” (the guy with Tourette’s, so it’s all very amusing).

Oh, Yvonne Strahovski (The Handmaid’s Tale) also appears as a token wife character who likes to paint, and Jake Busey pops up as a scientist the movie neglects to inform you is apparently the son of his father Gary Busey’s character from Predator 2 (1990). A quick mention that one of these creatures sliced his dad in two with a frisbee was too much? Maybe his role got cut down. 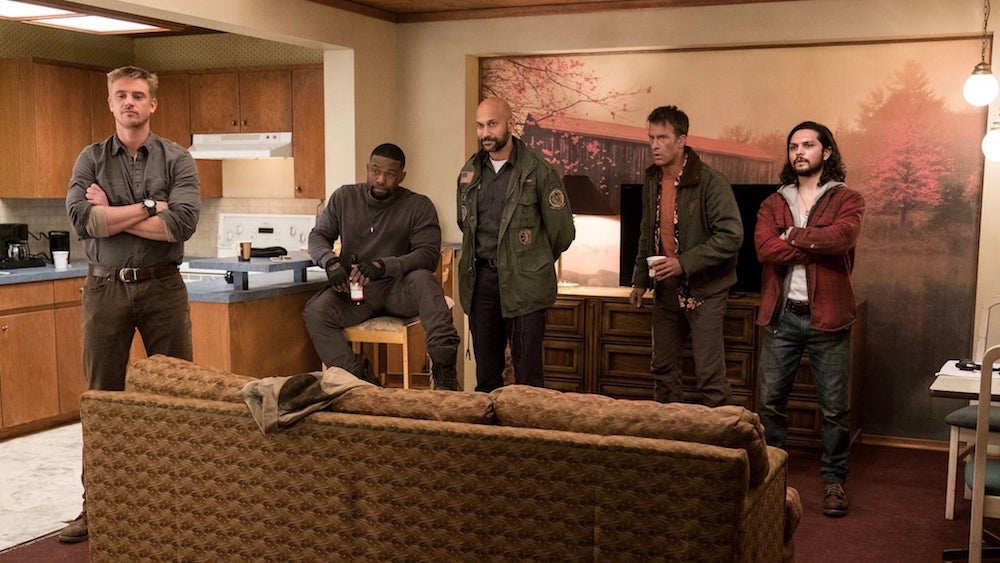 The only actors who just about get away with their credibility intact are Boyd Holbrook (Logan), who does what’s needed given the constraints and has some modicum of charisma, and Sterling K. Brown, who understand the balance of stern gravitas and silliness required for movies like this. He’s also the only actor who can sell Black’s quips, so is given the best ones, with amusing lines like “… they’re large, they’re fast, and fucking you up is their idea of tourism”, or “Predators don’t just sit around making hats out of rib cages. They conquered space.” But for the most part, the characters and what comes out of their mouths isn’t memorable or as hilarious as intended. And those were the aspects I had some confidence in because of Black’s involvement.

The production and the visual effects are fine, but nothing happens to make you sit up and take notice. I was pleased the violence and gore wasn’t diluted by 20th Century Fox (thank Deadpool), although the tone of the movie’s so jokey and stupid the blood and brutality fail to make an impact. You just get a healthy amount of arterial spray whenever someone gets slashed or decapitated, even when it doesn’t make much sense. I saw a lab technician get thrown against a glass window, creating an enormous blood explosion I can’t quite explain because people don’t “pop” like that. 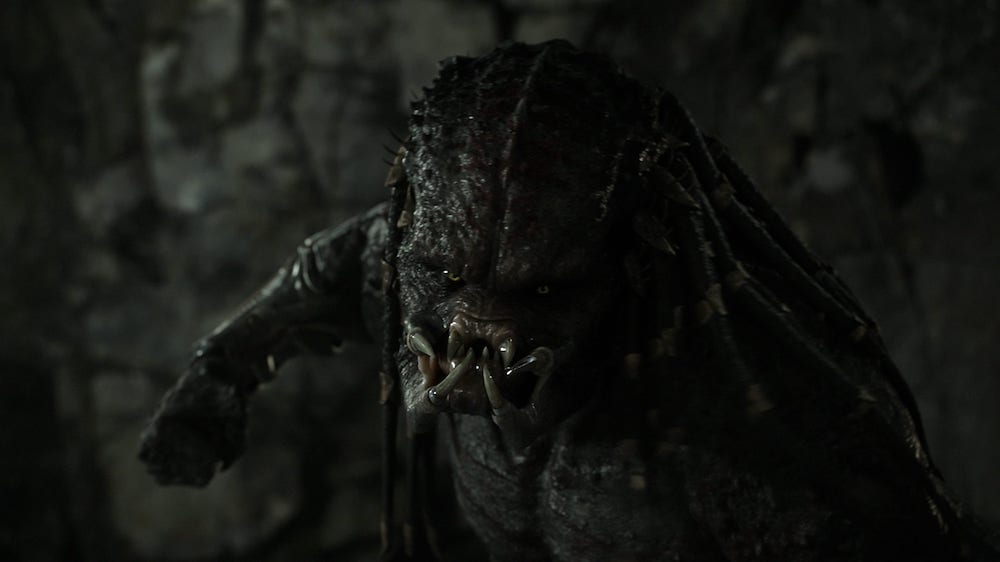 The actual Predators themselves are about as good as one could hope for without Stan Winston involved, or the late Kevin Peter Hall in the costume. Amalgamated Dynamics were rehired after working on the make-up for the atrocious AVP spin-offs. I still find the Predator’s mandibles too animated and the creature’s iconic ‘vagina face’ too plastic-y (not enough saliva and sweat), but the film does a solid job in terms of showing their behaviour and making them seem like powerful beings. You’re certainly alarmed when one wakes up and starts killing scientists, although the movie’s big new idea is to introduce an “Upgrade Predator” that’s taller and stronger than its brethren thanks to DNA jiggery-pokery. But that monster’s created using CGI and much less compelling as a result.

The film also reveals how much of the Predator’s high-tech weaponry is fully automated, which makes them seem less sporting! There was always an imbalance with the incredible technology the Predators wield, compared to the weapons the humans had to defend themselves with, but one always felt like the creature was still having to use basic skills of aim, stealth, agility, strength, and speed to make its kills. But someone decided the Predator’s armour should be more along the lines of something Tony Stark would invent, so they can literally walk through any hostile situation and have their gauntlets, masks, and shoulder cannons pick off adversaries without them even having to think about it. 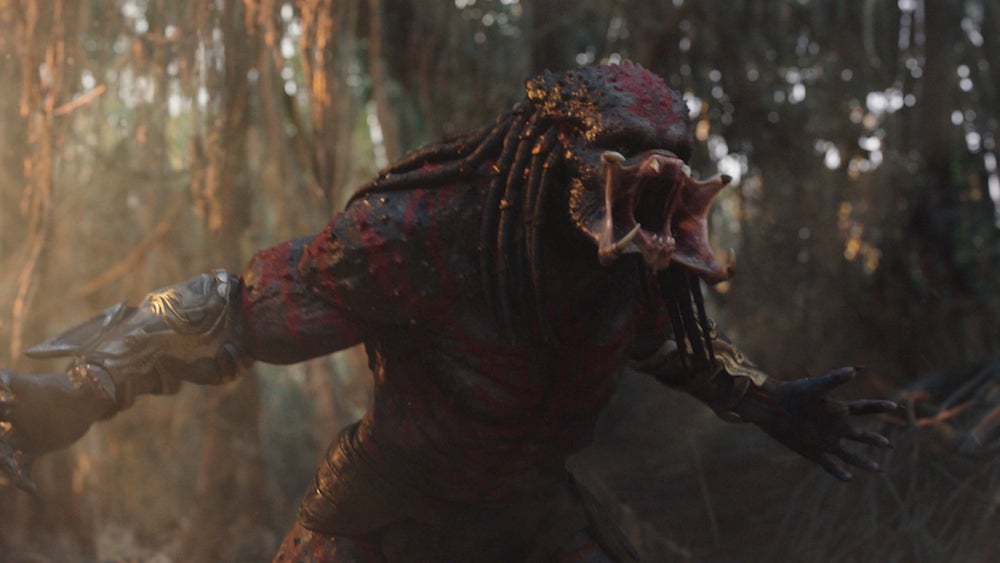 The Predator has a convoluted beginning that strains to set-up the fairly exciting prospect of a bunch of mutinous grunts having to defend a small town from an alien invader, but it quickly goes off the rails and is never as entertaining as it might have been. The climax was apparently reshot when it didn’t test well with audiences, although we’ve since been led to believe the change was mostly to ensure the action took place during the nighttime because it’s scarier. I don’t know if that’s the whole truth of the matter, but it definitely feels like things got chopped up and dumbed down. That said, we seem to have avoided the awfulness of seeing friendly Predators fighting alongside humans in tanks, so this film could have been a lot worse.

There are changes of allegiance that felt suspiciously like a rewrite crowbarred into the narrative, and when the major characters (eventually) start dying… it’s very hard to care. A few characters die so quickly it doesn’t even register. And that’s a big strike against The Predator, as the original is fondly remembered for having a compelling and likeable gang of bad-asses you don’t want to see get killed. They get scared, too, so the feeling of dread falls over the whole movie. There’s none of that there, it’s just CGI mayhem, mostly unfunny quips from a bunch of male assholes, and Alan Silvestri’s excellent music theme played at half-speed by composer Henry Jackman. It even sets up a sequel we’ll probably (hopefully) never get, with a denouement indebted to The Guyver (1991) and Independence Day: Resurgence (2016).