The question Minions needed to answer was whether the cute Despicable Me critters are compelling and amusing enough to carry their own film. It’s hard to argue these pill-shaped yellow creatures are anything other than delightful and adorable, but they speak an incomprehensible language, have no goals other than to a desire to serve, and have previously only been effective in small doses. Despite all that, they’re a hit with kids and widely loved, so have earned themselves a headlining prequel. Does it work? Not really.

The problem is simple: the Minions work because they’re additional comic relief within a comedy. They’re the funny, wacky sideshow that can add more humour when the dramatic stakes are raised during the Despicable Me‘s. So they’re fun, but are by no means central to the plot of either film. By contrast, in Minions, we follow the creatures from their initial existence as single-celled organisms, through to their servitude under a succession of masters (including a T-Rex, an Egyptian pharaoh, Count Dracula, and Napoleon). After these employment failures, they go into hiding, but find life has no meaning without servitude (an alarming revelation and bad message, when you really think about it).

They’re despondent about their species’ future, but, in the 1960s, three Minions—Stuart, Kevin and Bob—decide to go in search of a new boss. Luckily, they find ruthless Scarlett Overkill (Sandra Bullock) at an Orlando convention for villains (“VillainCon”), and the plot quickly hops over to England, where Scarlett forces the trio to steal Queen Elizabeth II’s crown. 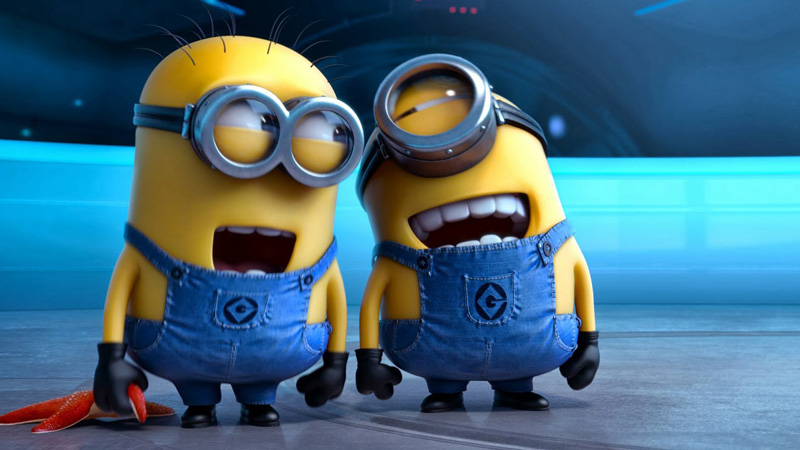 Making the Minions the focus of a whole movie doesn’t pay off because they have so little to offer beyond cuteness. Can we identify with them or get a sense of any character growth? The very idea is ridiculous. These characters surely can’t be allowed to change or develop because this is a prequel, and they need to remain exactly as they are for when the continuity connects to Despicable Me.

This flaw is at the core of why Minions doesn’t fully work. No matter whether you’ve got a dramatic adventure or a whimsical comedy, conflict is at the heart of great storytelling. It may be conflict on a range of scales, but it has to exist. The characters in a story have to want things and they have to face challenges—so character growth is a key ingredient when it comes to telling satisfying stories. Without the possibility of this, there’s no room for progression or momentum during Minions, so every other element of the escapade falters.

The Minions are still endearing and a lot of fun to watch. That’s what makes the start of the film so enjoyable. It’s very entertaining to watch them try and fail with so many different masters, and there’s innate charm to their silliness. The pacing is strong in the first act and, while the entire film relies a lot on an omniscient narrator, there’s a decent amount of storytelling logic and laughs to be had in the film’s beginning. However, once the real story gets underway, logic is jettisoned and it becomes clear how flimsy the story is. From therein, Minions only occasionally recaptures its opening highlight.

You’re probably wondering whether the target audience—young children—will enjoy this, and whether the humour’s any good. Honestly, I think it’ll only appeal to the very young. Most of the humour relies on laughing at the Queen and the English in general, and it’s done in a way that requires HRH, and the entire country, to be depicted in broad caricature. The Minions deliver a lot of slapstick silliness, but the array of jokes they’re suited to becomes repetitive, and a lot of the humour feels cheap and unsophisticated.

There are things to enjoy, of course—like the colourfully inventive animation style and the fantastic ’60s soundtrack—but on the whole, this is a bit of a misfire. We live in a time when Disney and Pixar deliver consistently brilliant, subversive animations that appeal to all age-groups, and they know how to tell good stories. Universal’s Despicable Me films share those qualities, too, because there’s heart and emotion behind the idea of a supervillain being softened and strengthened by parenthood. But you can’t transplant one ingredient from those films and expect it to be strong enough to hold its own for 90-minutes. The Minions were effective because they weren’t the headlining focus, and Minions doesn’t do enough with them as solo characters to make it worth your time. It barely even attempts to tell a coherent story; meaning you’ll have no reason to care.