The rebooted Planet of the Apes saga has earned a reputation as one of the most sophisticated and complex film franchises of the past decade. With War for the Planet of the Apes, the excellent blockbuster trilogy concludes on a powerful note. Set two years after Dawn of the Planet of the Apes (2014), we follow the brutal war between the apes and a force of human soldiers to its bitter end. Director Matt Reeves returns to bring emotional depth to a challenging story about the best and worst of humanity.

These movies tell the story of Caesar (Andy Serkis), a chimpanzee who gained freedom from captivity before a simian ‘flu swept the globe, leaving humans sick and granting apes increased intelligence. He grew to become leader of those apes, but is now battle-hardened and weary. Serkis is again magnificent, and if there’s any justice he’ll be in contention for major acting awards. Caesar’s a complex character, but one who stands as a symbol of humanity and a figure who’s experienced both love and cruelty from humans. In War, tragic events bring him to his darkest point yet, and one of the key conflicts becomes the battle for Caesar’s very soul. He’s put to the test, and the film always chooses the most difficult and unexpected of ways to examine his morality. 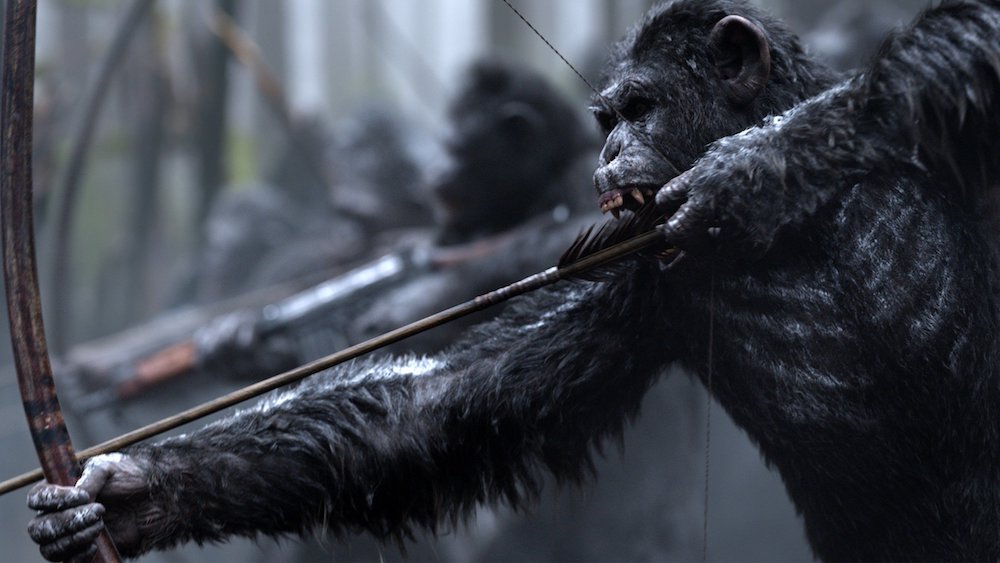 While the film looks at the potential corruption of its simian hero, it also focuses on the downfall of mankind. We already saw how fear can lead to irrational and unpleasant places in Dawn, and this film picks up those story threads to explore them further. Internal divisions have split human forces apart, and their armies now kill their own when they step out of line, force/coerce apes into slavery and obedience, and pursue a crusade against the enemy while the apes try to find themselves a home where they’ll be safe from violence and live in peace.

None of this would work if the apes themselves weren’t convincing, and the visual effects and performance capture is, of course, astonishing. The line between real human characters and those animals created with the help of digital effects is impossible to see, with every ape looking as lifelike as any actor onscreen. The returning apes include Caesar’s trusted friends and advisors Maurice (Karin Konoval) and Rocket (Terry Notary), the treacherous Red (Ty Olsson), Caesar’s wife Cornelia (Judy Greer), and his sons Blue Eyes (Max Lloyd-Jones) and Cornelius (Devyn Dalton). Every performance feels real and leaves an impact, and the power of the orchestral score enhances every detail of the film’s drama, too. The work from Michael Giacchino (Star Trek Beyond, Rogue One: A Star Wars Story) is absolutely tremendous. 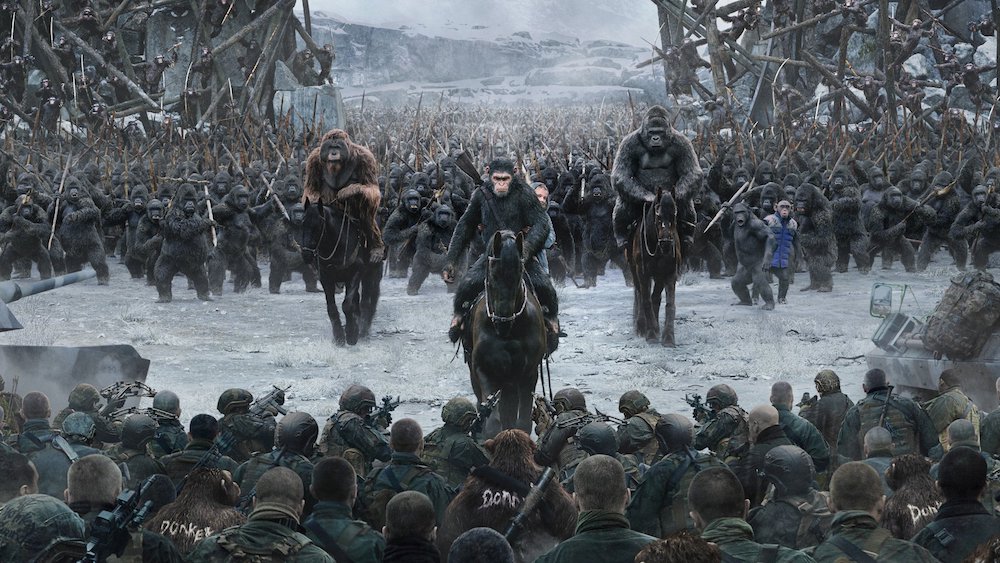 The elegance of the screenwriting is also key to how successful the storytelling is. The character arcs are often established and developed with little, if any, dialogue. The film instead relies on actions, gestures, and the look in an actor’s eyes to sell these characters and their experiences. It works beautifully. A character like Maurice doesn’t speak at all, but his paternal and protective relationship of the mute human child Nova (Amiah Miller) is one of the film’s most important connections, woven into the themes it’s most committed to investigating.

Caesar finds himself opposite an impressive antagonist in the Colonel (Woody Harrelson), a man who has no interest in moral complexity, and is more comfortable believing he has a singular purpose. He views the apes as a threat to human extinction, proclaims he’s participating in a “holy war”, and views himself as a leader with the courage to make sacrifices Caesar wouldn’t. He challenges the commander of the apes about this, arguing that none of his violence and cruelty is personal because these are all “acts of war”. But his detached insistence on doing whatever it takes to save his people seems far less human than the less aggressive path of self-preservation the apes try to take.

There are many moments when it feels like War is pushing the extent of bleak tragedy audiences will want to handle in a summer blockbuster. By focusing on a vengeful Caesar, we’re seeing our hero act less noble than he ever has before. The sequel’s keen to put the notion of his heroism under a microscope, and it doesn’t let you forget that the upsetting events that kickstart the plot only happen as a result of Caesar’s insistence on showing the humans mercy. Should Caesar regret that he’s a thoughtful, wary leader, and won’t rush to violence? It’s certainly a choice that can have devastating consequences. The film doesn’t provide an easy answer, but through the Colonel it shows us how adrift and fearsome a leader without any emotion can be.

While the movie can be dark and has a lot of knotty philosophical issues and themes on its mind, it’s not entirely without levity. We’re introduced to Bad Ape (Steve Zahn), a socially awkward chimp living in isolation, who lends important comic relief, but also has a moving backstory of his own. Much of the final act concentrates on freeing apes held in captivity and a complicated escape plan, all while humans clash with each other and the apes band together to survive. It may rarely be light-hearted, but this is adventurous, rousing filmmaking. War is gripping and tense in all the ways it needs to be, building to confrontations and important moments that are exciting, bittersweet, and unconventional for big summer entertainment.

It’s difficult to say if the rebooted Planet of the Apes franchise will continue beyond this point. But, even if it does, this is the conclusion to Caesar’s story began in Rise of the Planet of the Apes (2011). It’s not only about defeating a bad human and saving apes, this is about Caesar’s challenges as a leader and seeing what decisions he’ll make. In Dawn, he had to battle the dogmatic radical Koba, and here he must confront how there’s something of Koba inside him, too. Caesar has to recognise and control his anger, rather than giving in to his darkest impulses. This captivating character arc plays out during an interspecies battle, making it a movie with huge scale and character depth. War for the Planet of the Apes has a lot of heart, and the way it balances the intimate and the epic is truly remarkable. Matt Reeves knows exactly how to make this emotional and poignant. He’s crafted the perfect conclusion to a sci-fi trilogy that showcases the very best of what blockbuster cinema has to offer.