In the mid-1960s, the Italian fascination with, and deconstruction of, the American Western had reached a peak and the king of the Spaghetti Western was Sergio Leone (A Fistful of Dollars). However, in 1966, a stranger moseyed into town: Sergio Corbucci, a prolific but struggling director who’d dipped his toe into the genre before, but never with more brutal success than in Django (1966).

The story is a familiar one for fans of the genre. In a small, post-Civil War ghost town, two rival factions stand at odds: a gang of former Confederate soldiers, led by the virulently racist Major Jackson (Eduardo Fajardo), and a band of Mexican revolutionaries led by the only marginally less crazed General Hugo Rodriguez (José Bódalo). 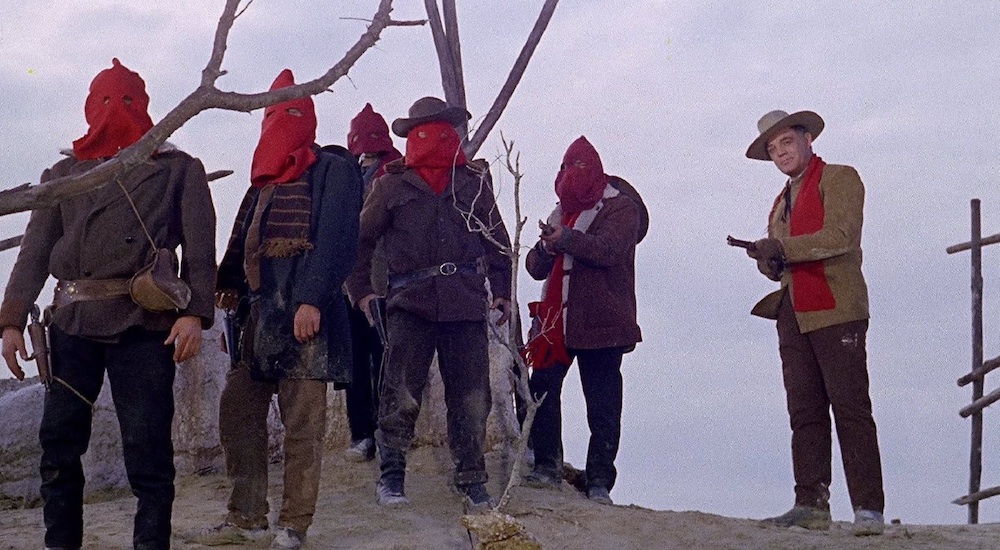 The film opens on a group of Mexican bandits whipping a tied-up prostitute named Maria (Loredana Nusciak), only to be gunned down in quick succession by a gang of Jackson’s Confederate soldiers—men who, promptly after untying Maria, start preparing a wooden cross to burn and crucify her on.

Enter the mysterious Django (Franco Nero), a drifter dragging a coffin behind him, who scolds these men for treating a woman this way. He dispatches all five without breaking a sweat and, in a disarmingly gentle voice, tells Maria “my name is Django, no one will hurt you anymore as long as you’re with me.” It sets the scene for a movie filled with spectacular gunfights, surprising sensitivity, and a level of transgressive violence never before seen in a Western.

There are some remarkable parallels between Corbucci’s story and Leone’s from A Fistful of Dollars; parallels which can largely be explained by their shared source of inspiration: Akira Kurosawa’s samurai classic Yojimbo (1961). Still, in spite of the narrative similarities and the obvious Clint Eastwood archetype that Nero’s fulfilling as Django, the two films are more different than meets the eye. Leone’s movie, visually stunning as it may be, is almost monochromatic in its reliance on shades of brown, but Corbucci rebels against this idea of the Western as a colour-drained genre. The desolate landscapes of Corbucci’s America, almost wintry in their complete lack of plant life, are punctuated by shocking bursts of bright colours. Major Jackson’s soldiers—who are, in everything but name, Klansmen—wear red cloth masks that almost jump out of the frame at you, an oasis of colour in the film’s bleak desert backdrop. In the film’s most triumphant action setpieces, too, the vividness of the blood is a welcome pop of crimson that separates the film and gives it a personality all its own. 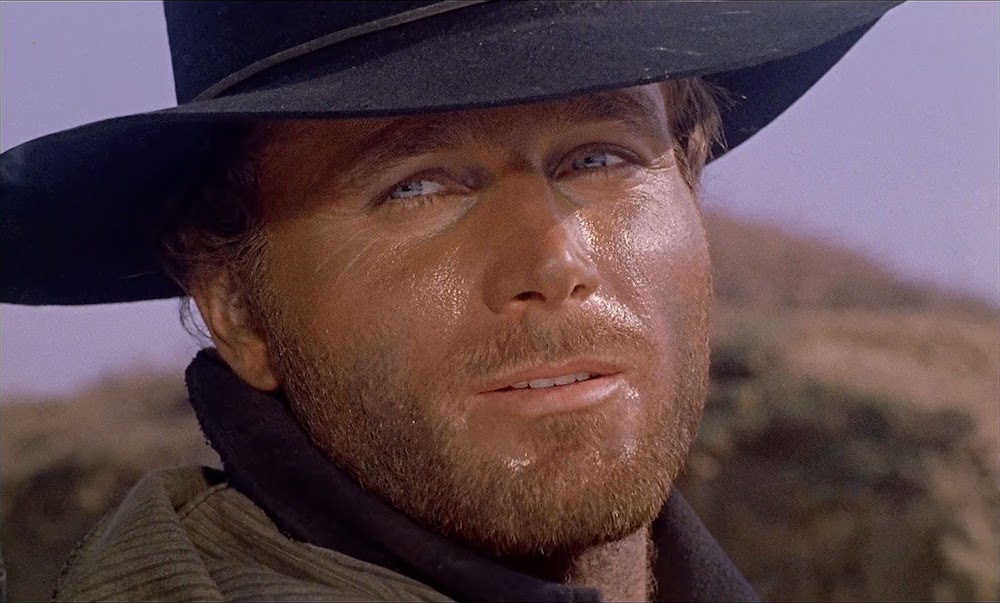 The most memorable distinguishing feature is, naturally, the sheer brutality of it. While the violence may pale in comparison to the Quentin Tarantino film it inspired—Django Unchained (2012), which features a jokey cameo from Nero himself—in 1966 it was considered outrageous and borderline scandalous in its lack of restraint. The most memorable moment will be familiar to Tarantino fans: General Hugo captures one of Jackson’s spies, savagely cuts off his ear, and, with a crowd of laughing spectators gathered around, feeds it to him before shooting him in the back. It’s grisly, to say the least, and when considered alongside the mud fights, barroom brawls, and innumerable deaths by machine gun, there’s no question Corbucci was toying with the idea of revitalizing the Western by way of exploitation and excess. 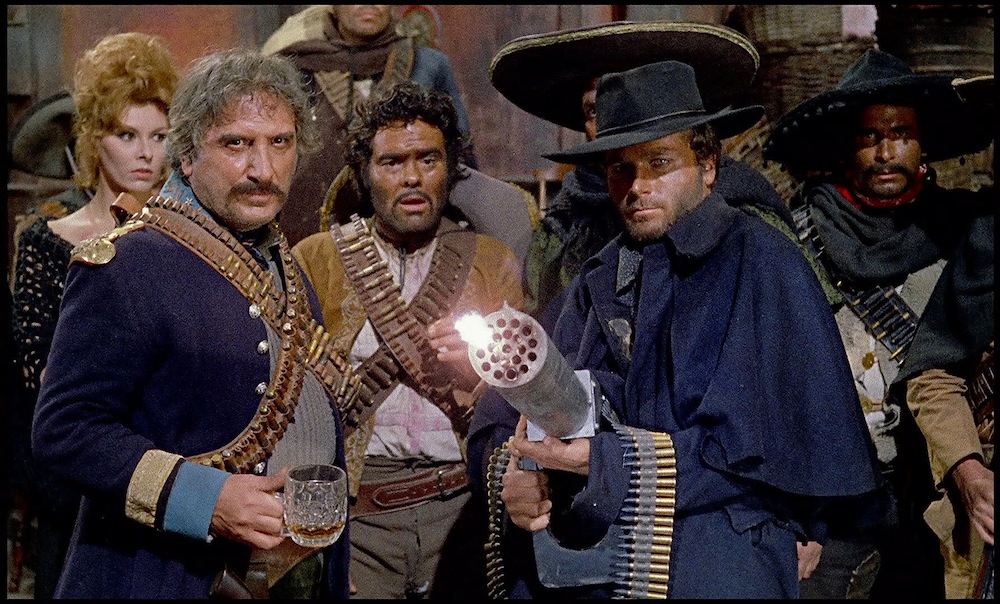 Still, against this backdrop of shocking violence lies a surprisingly tender love story. The emotional heart of the film is in the romance between Django and Maria and, against all odds, this subplot works. There’s ultimately no mistaking the tender, soft-spoken Django for Clint Eastwood’s unfeeling ‘Man With No Name’, especially when he starts speaking mournfully about the death of his wife years ago at the hands of Major Jackson. For all his tough posturing and skill with a pistol, Django is a romantic at heart, and his slowly unfurling relationship with Maria feels not only compelling but also, in the end, unexpectedly moving. Django is simultaneously the most macho and compassionate protagonist in the wild, wild west—one who reaches well beyond the constraints of his Eastwood-esque role to achieve something far more interesting and nuanced.

The film has inspired countless unofficial sequels and imitators (Tarantino among them), but there’s truly nothing like the original. It’s a bloody and bruising jolt of exploitation movie energy, funnelled into a genre that sometimes borders on blandness. It’s Leone’s oeuvre condensed into a fast-paced collage of lurid set pieces and high-stakes drama. As the eponymous theme song announces after the film’s transcendent, blood-soaked finale, Django will surely face another day… and if you didn’t already know his name you’re not likely to forget it. 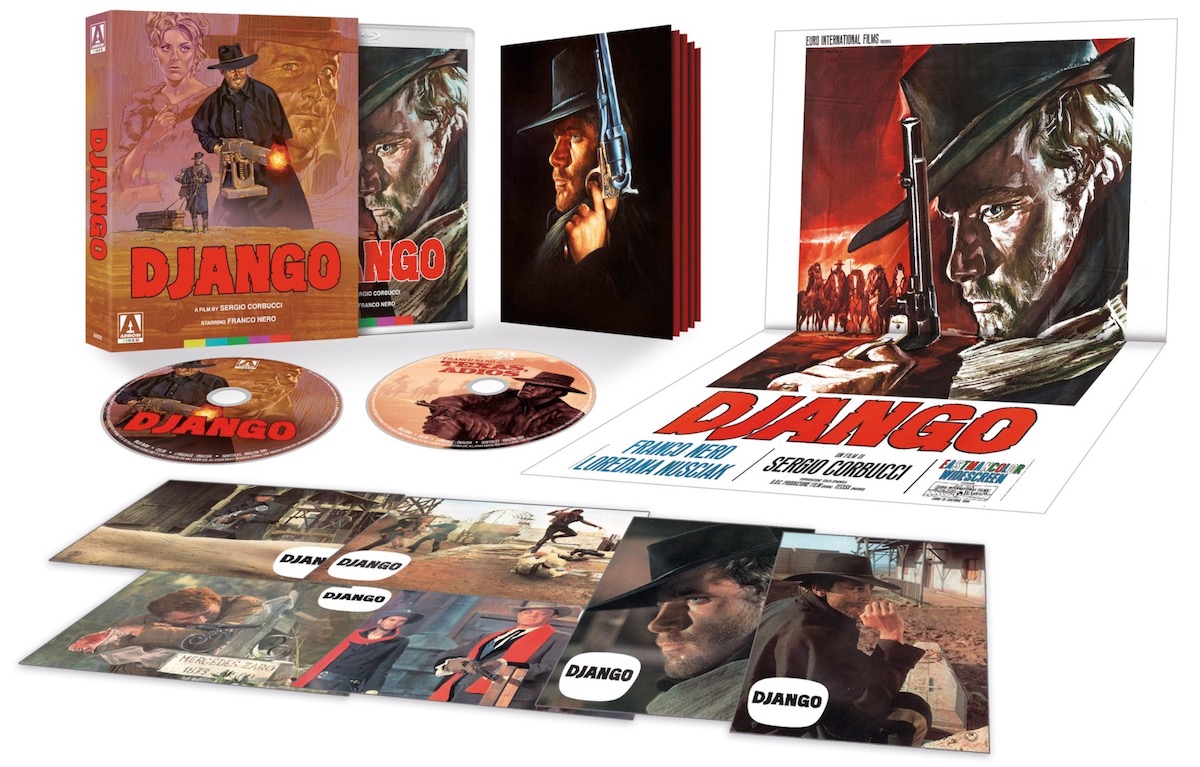