There are moments in Ivan Nagy’s Skinner where it feels like its absurdities will give way and the film will start to disturb. One of those moments sees protagonist Dennis Skinner (Ted Raimi) living up to his surname and skinning a victim while relaying his tragic past to her corpse. His boilerplate backstory isn’t too discomfiting, however, it’s more the bleak visuals of a skinned person…

Specifically, it’s not seeing a person without their skin, it’s the removed skin itself—taken off as easily as a coat. It isn’t a realistic or entirely convincing prop but it’s oddly upsetting. That’s because it inspires dark and intrusive thoughts. The idea that, as much as we might like to think we’re indestructible, we are still physical things—vulnerable and destroyable. It’s the unnerving notion that we can be prodded and poked after death, maybe even taken apart like an old car being stripped for parts… 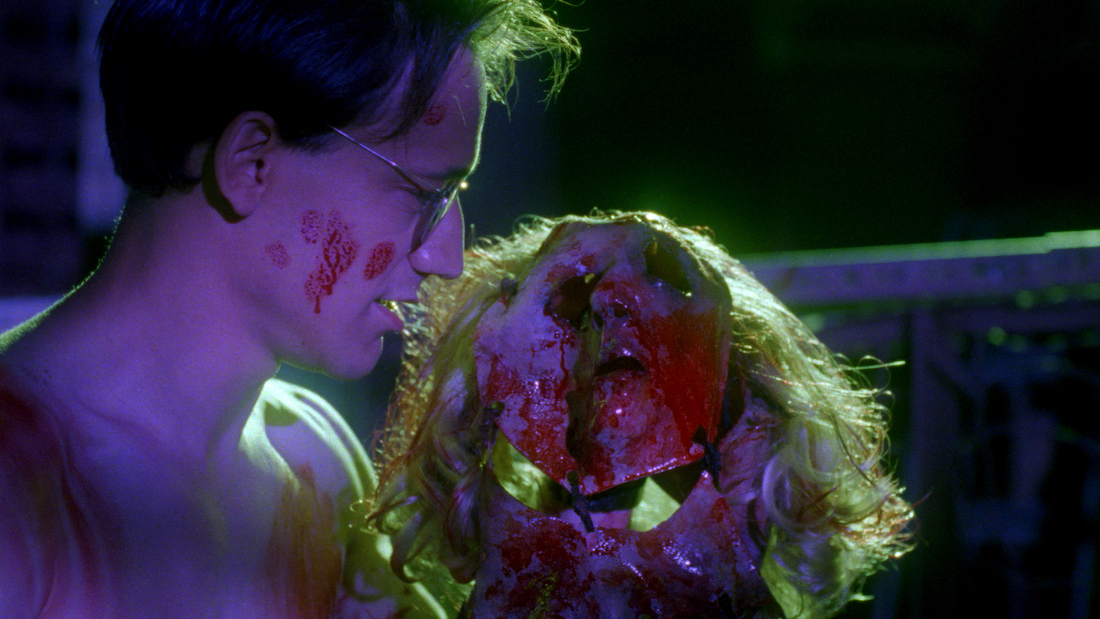 Better-known and, indeed, better films such as The Silence of the Lambs (1991) and Midsommar (2019) play with the metaphoric terror of losing one’s skin—but just because the epidermis of Skinner is cheaper and thinner, we shouldn’t discount the rawness of its imagery. Dennis is a man who kills and flays people before donning their skin and ‘playing’ them, seemingly for fun. One might say he’s an early adopter, but extreme implementer, of cosplay! His acts are based around his desire to physically change and look different, and it’s no surprise that this movie’s central emphasis is on visual style and tone.

When we first see Dennis, he’s ankle-deep in water and shot from the kind of high, dutch angles that make much of Skinner feel like a music video. If that sounds like a criticism, keep in mind that music-video-esque could just as accurately describe classics like Suspiria (1977) or Return of the Living Dead (1985). What works for Skinner is that it indulges these tendencies, giving much of the first hour a floating dreamlike atmosphere of skewed angles and contrasting light. The harsh, non-linear editing of the early kill scenes are, if one’s being generous, borderline arthouse. It wouldn’t feel out of place as the early work of Ted Raimi’s more-famous brother, Sam (The Evil Dead)

Director Ivan Nagy, who passed away in 2015, directs with a refreshing energy and a keen eye for the striking and unusual, which often rescues the poor plotting and narrative dead-ends. Dennis arrives in town (for whatever reason) and decides to rent a room from Kerry (chat show host Ricki Lake). She and Dennis click but her violent boyfriend is distrustful of this strange interloper and edges closer towards his secret. Meanwhile, a surviving victim of Dennis’s, Heidi (Traci Lords), holes up in a hotel room taking drugs and plotting her revenge. 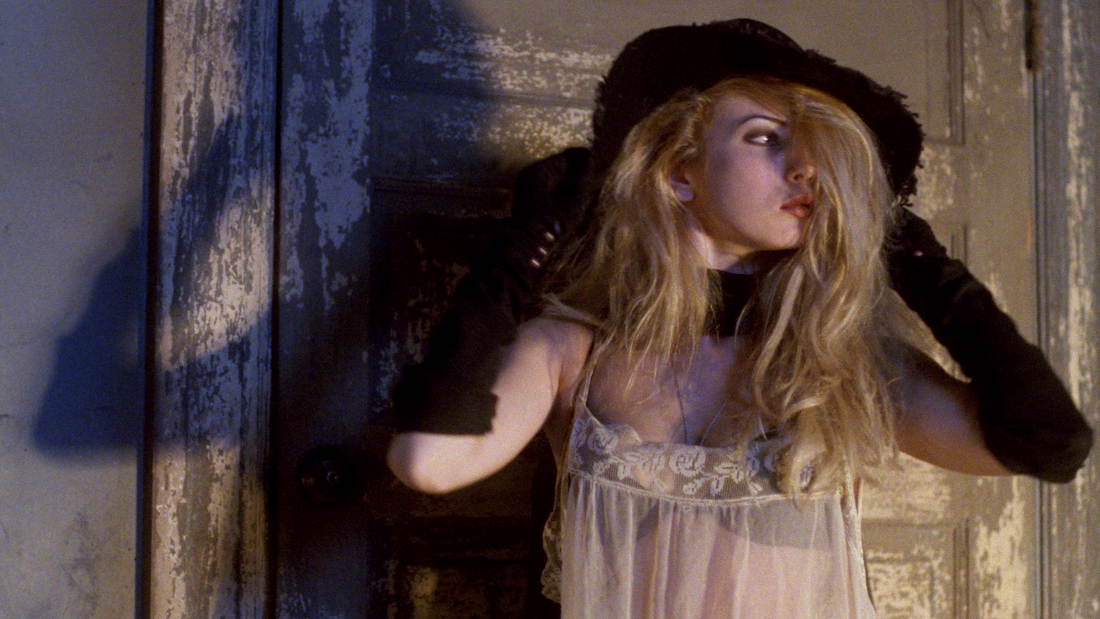 The tension should presumably come from Dennis and Kerry getting cosy with one another, but the development here is cut off by writing which throws Dennis back into the blood and guts whenever he approaches something like human emotion. What we have is a character who can easily be discovered and who doesn’t seem to care much about it—it’s the dilemma faced when you have such a bonkers central character. Raimi is terrific as Dennis. Dressing in era-specific and unhip 1990s clothes (is he the first normcore killer?), everything about him just screams dork. But look closer and he’s wildly off-putting and strange. His smile is a little bit too crooked, while his friendliness carried a hint of Norman Bates. When it’s time to switch into a full-on psycho mode, Raimi’s brilliantly unhinged in a way that feels startlingly in line with the character we’ve come to (sort of) know.

His backstory, while somewhat elucidating his motivations, feels unnecessary and tacked on—as if, in the grand tradition of horror, the monster just needs a soliloquy to explain his monstrousness. The skin doesn’t entirely fit and the film leaves without asking some of the more stirring questions that its subject might inspire. A character literally wearing the skin of somebody else and pretending to be them could’ve even passingly brought into play the fear of losing your identity, or the lust to voyeuristically live as someone else. But Dennis’s actions don’t mean very much at all which, for a low-rent slasher, is fine, but a more rigorous interrogation of his character might’ve validated the film’s flirtations with the artier side of things. 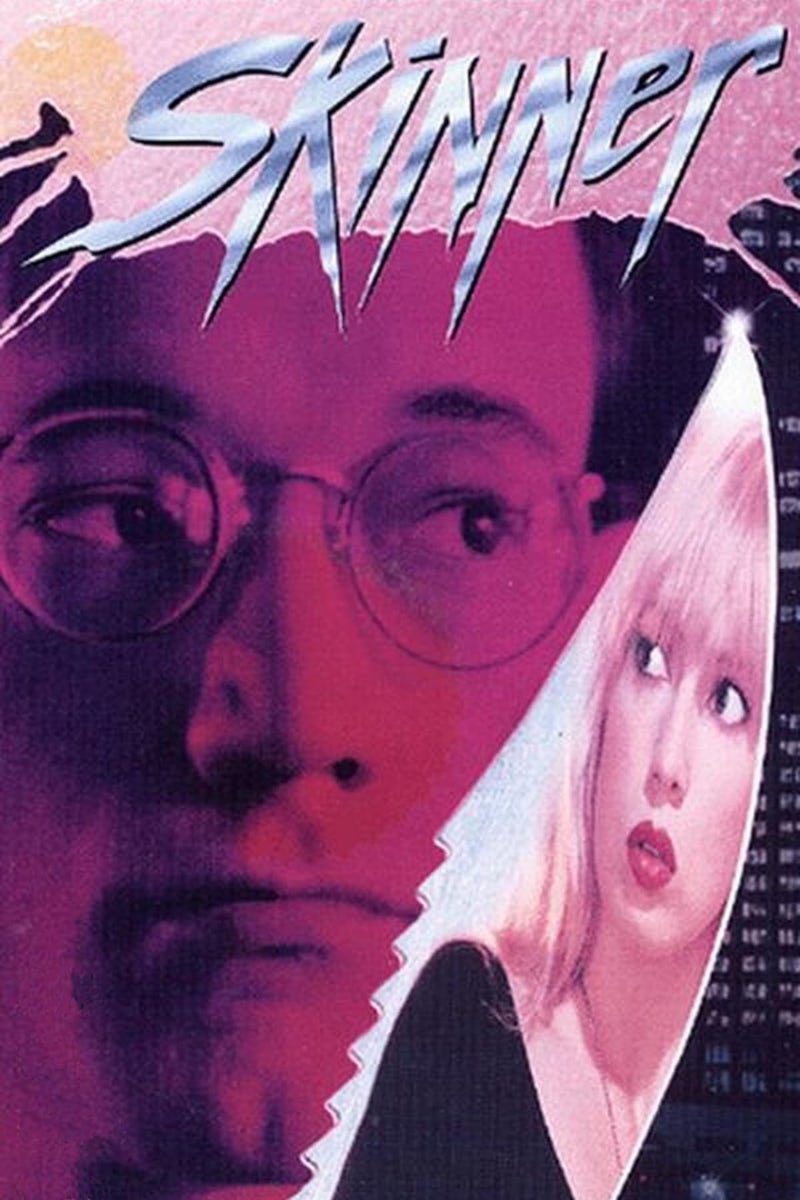 Skinner is the kind of film where hotels are the sleazy bed-bug kind, with buzzing neon signs and exploitative owners chain-smoking on the front desk (in this instance played oddly by the great Richard Schiff). Most of Heidi’s scenes take place in one of these hotels and, while visually arresting in an artificial early-90’s way, they feel wasted and repetitious when all Heidi has to do is routinely inject drugs and brood over a photo of Dennis. The scenes supposedly suggest a kind of reckoning approaches, at which point Dennis will have to face up to his sins. Though we see him walking in (or is it on?) water, and admiring water as something that’s ‘always changing’, Dennis isn’t baptising himself anew in water. He’s christening himself in blood. He’s not someone who wants to change his ways and, for that matter, Heidi doesn’t want to change him either…. she wants to kill him.

What promises to be the film’s apex (the showdown between Heidi and Dennis) is actually quite uninteresting. The film’s peak clearly comes before this, when it’s off the chain and on its worst behaviour, but it disrupts that for a dull 20-minute climax which ends with dispiriting abruptness. There are some fine touches in its finale (Dennis’s rapidly shifting and violent moods are legitimately frightening), but it doesn’t hold together or leave the viewer with anything of substance.

At points, Skinner seems to be aiming for the nihilistic brutalism of Henry: Portrait of a Serial Killer (1986), while at other times it seems content to exist in the realm of sleazy exploitation cinema. The issue is these parts cancel each other out, so you’ve neither watched something insightful into human cruelty nor luridly entertaining. That’s not to say the film is bad or entirely unsatisfactory… it just doesn’t know what to do with itself. It wears the skins of both the avant-garde and low-budget trash, and it comes close to wearing the skin of something legitimately good. It just doesn’t quite have the right parts to stitch together something special. 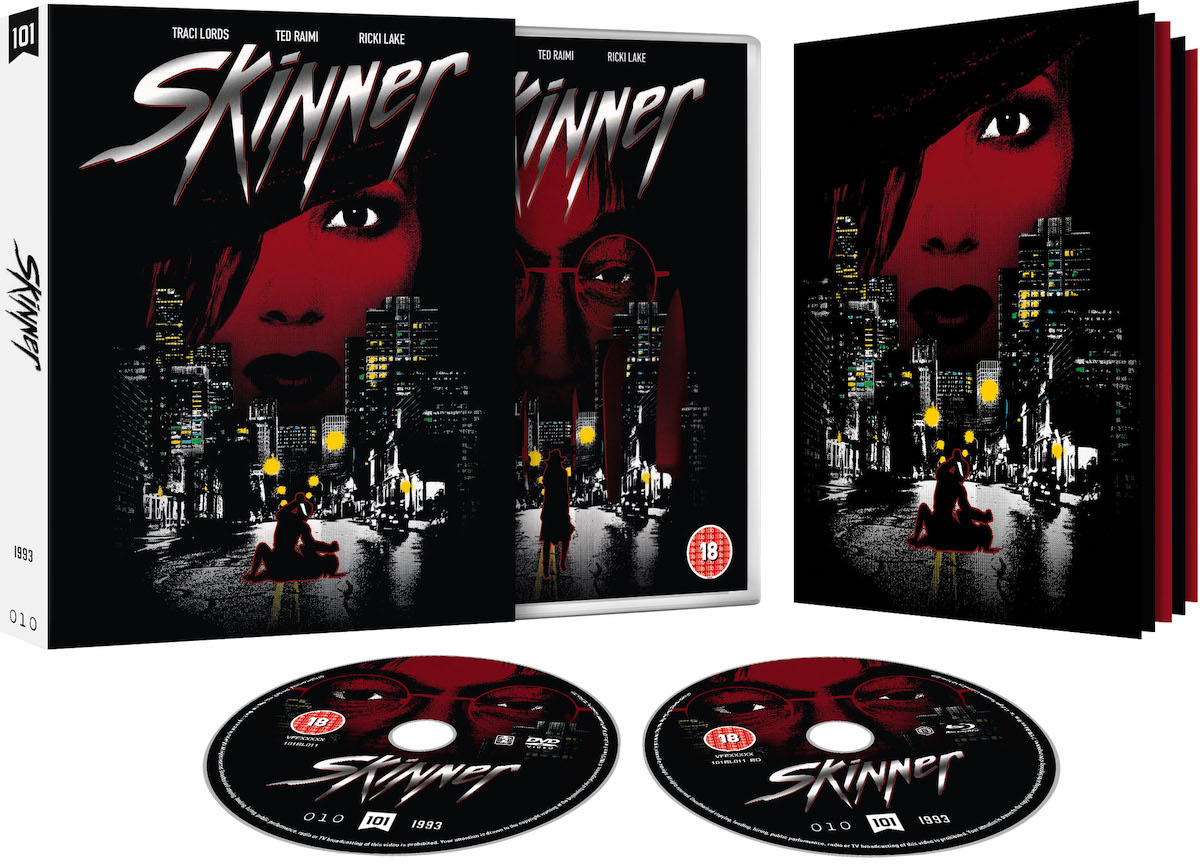 101 Films are fighting the good fight and saving films like Skinner from obscurity. We’re experiencing something of a golden age with re-releases of niche and cult movies in recent years. Old low-budget slashers like Skinner are for a niche market, but it’s a market that exists nonetheless, and consumers of a certain breed will lap up Skinner’s comprehensive and loving Blu-ray edition. The 4K scan and restoration of the 1.81:1 aspect ratio image maintains the film’s analogue aesthetic, but with added sharpness which makes the production design stand out.