Though Midsommar can hardly be considered anything other than a horror film, it ticks few of the genre’s usual boxes. We’re never on the edge of our seats, there are only a few jump-scares, scenes of gore are very limited (although vivid and nasty), and there’s no suggestion any of its events involve the supernatural… even if some of the participants believe they do.

But while it isn’t frightening, it’s certainly disturbing. And made all the more so by the relatively calm way in which it depicts four students’ descent into a gruesome and insane nightmare, as the guests—or, more accurately, prisoners—of a pagan cult in the wilds of northern Sweden. The unease is also magnified by the way the cultists are so pleasant and helpful. If Midsommar’s clearest inspiration is The Wicker Man (1973), then the commune of the Hårga is Summerisle reimagined by IKEA. 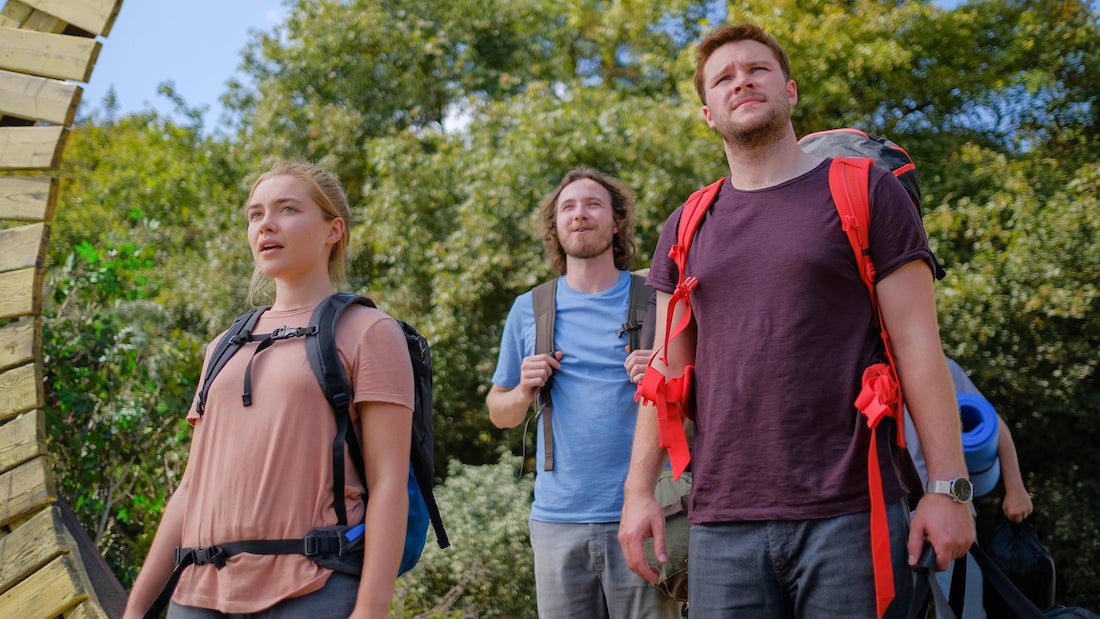 The four students—Dani Ardor (Florence Pugh), Christian Hughes (Jack Reynor), Josh (William Jackson Harper), and Mark (Will Poulter)— are invited to Sweden by a mutual friend, Pelle (Vilhelm Blomgren), who grew up as part of the Hårga commune. The idea is that the three lads, all of them anthropologists, will observe the local midsummer rituals conducted every 90 years, while Dani tags along as Christian’s girlfriend. So their mission is to investigate a remote community, as it was Edward Woodward’s policeman in The Wicker Man, and it’s surely no accident that Christian’s name echoes his religion as a Presbyterian.

But even before they arrive in Sweden, director Ari Aster and his outstanding production team (particularly cinematographer Pawel Pogorzelski, editor Lucian Johnston, and designer Henrik Svensson) drop plenty of hints that all’s not well. There’s a picture of strange monsters above Dani’s desk that goes unexplained and uncommented on. There are disquieting edits, like jump-cuts when we expect a zoom, or Dani going into the bathroom at their apartment then emerging from the bathroom on the plane to Sweden. Then, as they’re driving from the airport to the commune, the car and road turn upside-down… and as they walk the final stretch to their destination, the path is rich with flowers, seemingly far too many to be natural. 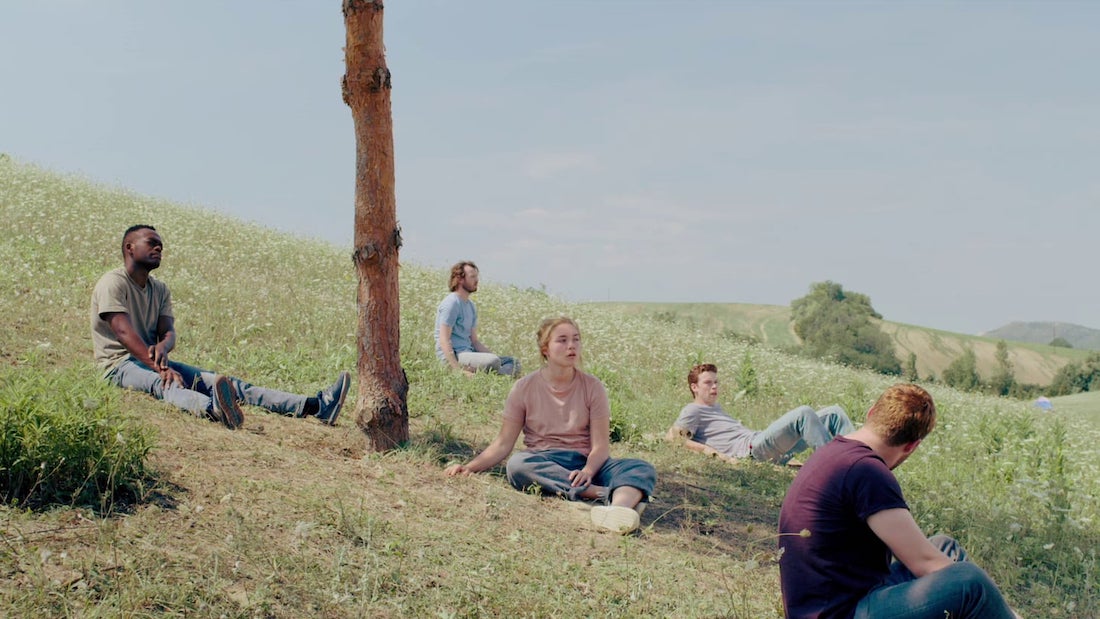 Flowers will turn out to be a visual motif of Midsommar and one of the movie’s most powerful achievements is the way they start to lend a sinister air despite being pleasant to look at. The same trick is achieved with beautiful sunshine—after the darkly lit, mostly interior scenes in the US, the night-time sun of Sweden becomes oppressive and unending. The light’s as brilliantly white as the robes the cult members wear.

At the commune, our suspicions are quickly but subtly confirmed, although the students remain oblivious to their danger for a long time. Pelle’s brother Ingemar (Hampus Hallberg) pretends not to know Dani’s name, but he’s clearly aware who she is, as they’ve been eagerly awaiting these foreigners for some time. One of them congratulates Pelle on having “an immaculate sense for people”, underlining the young man’s been tasked to bring outsiders to their midsummer ceremony. 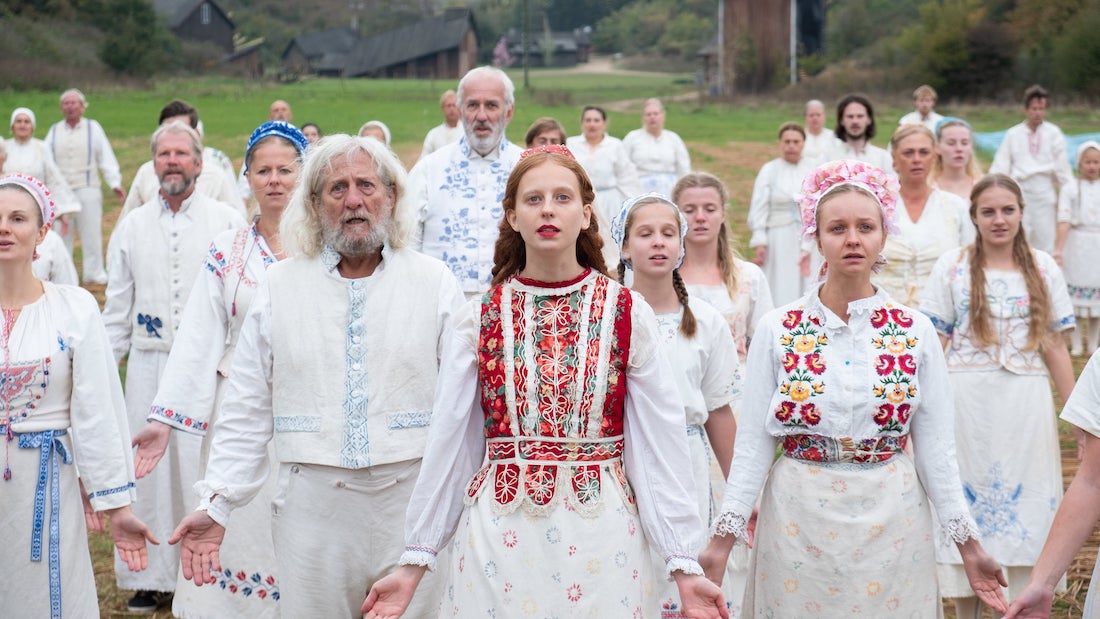 Aster, who made the memorable but more conventional horror film Hereditary (2018), takes his time. He quickly subjects the students to one shock, which unnerves them as it does the audience, but is then content to let the movie simmer slowly so the scale of the horror creeps up on us. Scenes are lengthy, with shots held for longer than most filmmakers would allow throughout Midsommar 147-minute runtime.

The sense of unease is aided greatly by Pogorzelski’s cinematography, with frequently geometrical compositions that feel slightly unreal and suggest that everything we’re seeing is part of a ritual. The music by Bobby Krlic (a.k.a The Haxan Cloak) doesn’t play as central a role in Midsommar compared to The Wicker Man (which some argue is a quasi-musical) but Krlic uses repetition very effectively. For example, listen to the flute motifs when the students first walk to the commune site, or the string theme after Dani wins a May Queen competition… they’re so incessant they make you feel edgy. 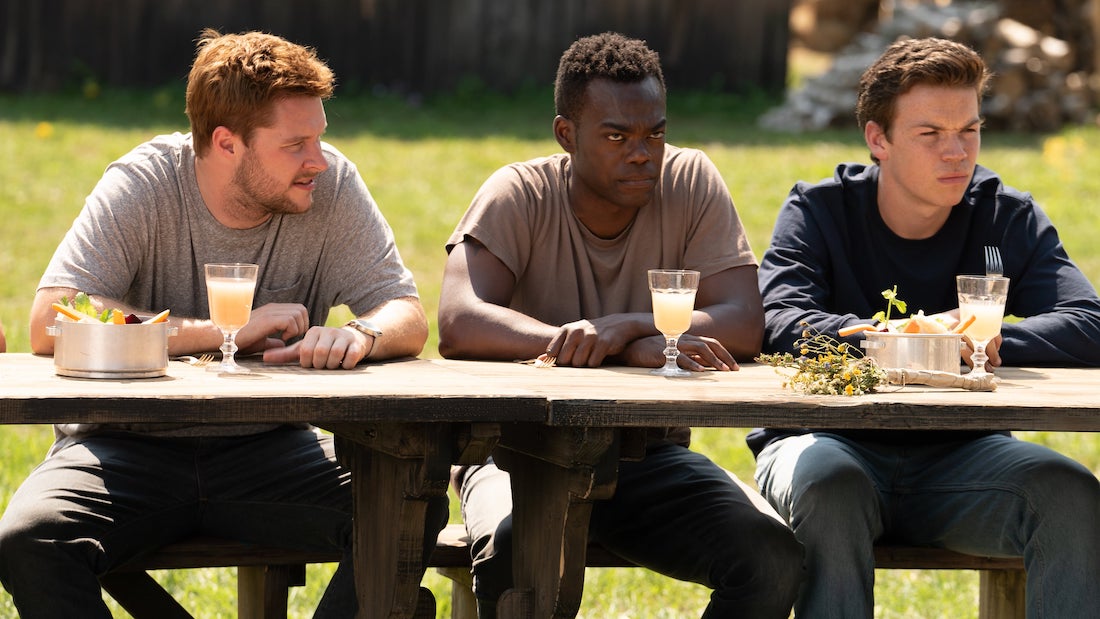 More overtly uncanny are the strange whisperings and vocalisations that form parts of the cult rituals, and the animal-like communal screaming when a cult member dies. And just as the absence of explicit threat and the dominance of pretty flowers in bright sunshine accentuate the horror that lurks beneath, so the frequent absence of music makes it all the more effective when it returns.

With all this going on, the fact every character is a little sketchy and the performances a bit superficial almost doesn’t matter. There isn’t much depth to any of them, except for Dani, and Pugh does a fine job portraying a young woman struggling with emotions she can’t quite understand. Dani’s probably-failed relationship with Christian also gives some human interest to what might otherwise be a rather impersonal story, and her brief smile at the very end, covered in flowers, is the “Rosebud” moment of the whole movie.

Elsewhere in the cast, party animal Mark gives Poulter a chance to prove he’s a better actor than The Maze Runner movies suggested; Jackson Harper (from NBC fantasy comedy The Good Place) is also credible as the most serious of the grad students; while Blomgren is manipulative in an ever-so-slightly-sinister way. 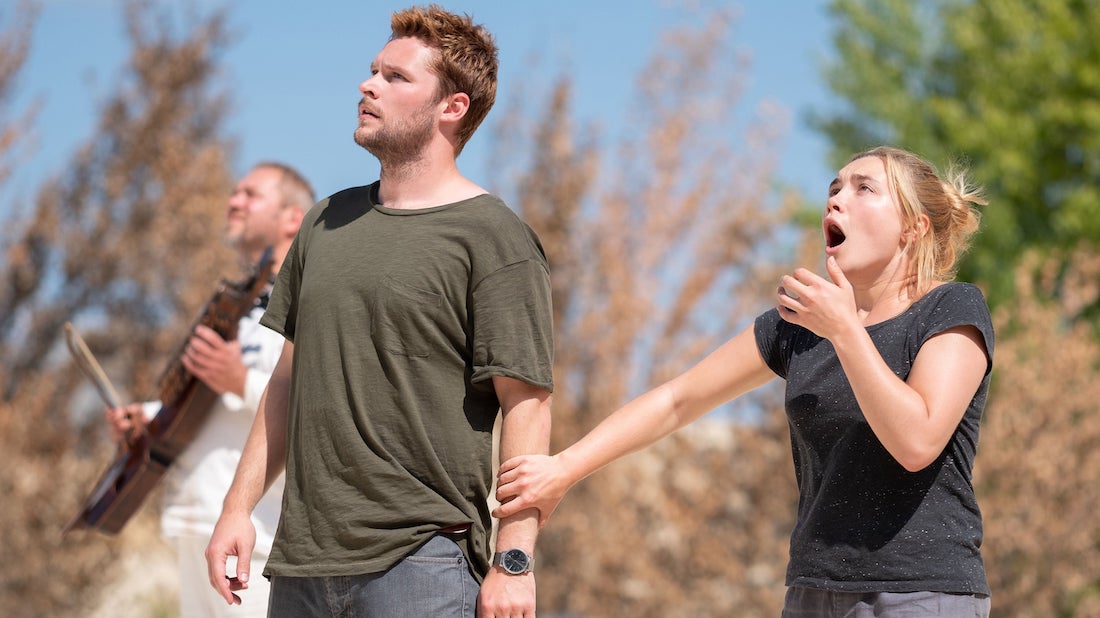 Midsommar is not without flaws. Most notably, there’s the desperately unsexy ritual mating scene which had my audience laughing, the cult’s in-bred visionary who seems shoehorned into the film purely to be grotesque, and some practical implausibilities—is nobody going to notice the kids have disappeared? And why are the cult’s elders concerned about the anthropologists studying them, when their findings won’t reach the outside world?

But all the same, this is one of those movies that’s stunning not so much for what happens but for how it feels. Long after you’ve forgotten the precise details of each student’s fate, you’ll remember its big patches of colour, the gorgeous flowers, the smiling Scandinavian welcomes amidst endlessly bright sunshine… with all of it disguising the blood and terror at the heart of Midsommar.