As is customary with Sherlock, there are a lot of red herrings to wade through in “The Six Thatchers” before even a whiff of the essential plot. Pushing aside the whole of “The Abominable Bride” and its dream palace return to the Victorian milieu of the original Conan Doyle stories, writer Mark Gatiss immediately deals with the cliffhanger from last Christmas and series 3’s finale “His Last Vow”.

On the one hand, Moriarty is declared well and truly dead. Well, you weren’t expecting Andrew Scott back just yet, were you? However, Moriarty’s posthumous plans are putting Sherlock (Benedict Cumberbatch) on early warning. He’s expecting something dreadful to turn up, and much of his trepidation is left to percolate in the background, adding to the sense of unease Gatiss generates in his use of W. Somerset Maugham’s retelling of an ancient Mesopotamian fable in his 1933 short story “An Appointment in Samarra”. Said appointment is with death, and if you know your Holmes canon then you’ve probably been expecting this will be the sad conclusion to Mary Morstan’s story.

In the Doyle canon, Mary (Amanda Abbington) and John Watson (Martin Freeman) meet in “The Sign of Four” and, after he marries her, she is very much a minor character, barely mentioned until Doyle kills her off in “The Adventure of the Norwood Builder”. Her cause of death is never revealed. Steven Moffat and Mark Gatiss have given her considerably more to do in Sherlock since introducing her in “The Empty Hearse”. As this is the first episode in a year, “The Six Thatchers” spends time catching up with John and Mary, the birth of their daughter Rosamund, and their life as ingénue parents.

Meanwhile, on the other hand, Sherlock’s murder of Charles Augustus Magnussen in “His Last Vow”, and Moriarty’s apparent survival, were never really going to be the main affair here. The murder of Magnussen is swept under the carpet. However, take note of Mycroft (Mark Gatiss) acknowledging the downside of brotherly compassion to Sherlock: “you know what happened to the other one.” We’ll return to that presently. A bit of doctored footage gets Sherlock conveniently off the hook even though he couldn’t care less as he’s too busy tweeting #OhWhatABeautifulMorning, salivating over ginger nuts and discussing ice lollies with a mousey woman called Vivian Norbury (Marcia Warren). 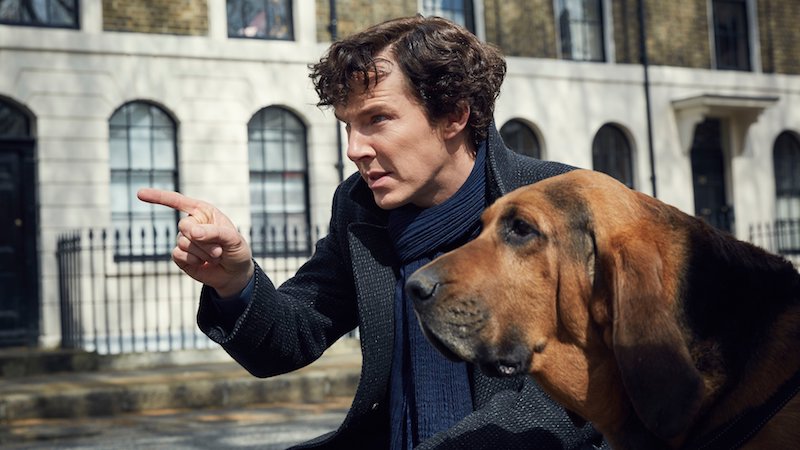 This just reestablishes and hyperbolises Sherlock’s dense intertextuality and its graphic use of network culture to relay narrative. The characters’ relationships with knowledge (tweets, websites, gossip, reports), while the innocuous activity of naming and christening a child and deciding on godparents, unfolds as Holmes magically deduces and closes cases with a severe case of texter’s thumb. Too busy being brilliant, he’s immune to the great emotional moments in life and is more than happy to ignore the distractions created by emotionally irrational human beings. But is he also missing the vital clues right under his nose?

For John Watson, this messy irrationality leads to a flirty encounter on a bus with a stranger. Although John soon closes the relationship down, conducted like the other sharing of secrets via texts on a phone, perhaps this isn’t the last we’ve seen of this woman. It all felt heavily signaled that she was ‘important’. Mind you, given Sherlock’s propensity to load meaning into what seem to be significant actions and then utterly ignore them, it may just be one more red herring given false importance.

This brings us to the episode’s title, “The Six Thatchers”, and the titular series of plaster busts as the target of a series of break-ins. In one instance it leads to the tragic case of a young lad’s death at his father’s 50th birthday after a trick misfires. It’s a preamble, as Sherlock well knows, to the actual story of Mary Morstan’s downfall. Like Conan Doyle’s original story, the smashed ornaments are the result of someone looking for something they’ve hidden. In Doyle it’s the black pearl of the Borgias (dismissed in the episode) that is the centre of a Mafia squabble; here it’s a memory stick that exposes Mary’s identity and activities as a mercenary for hire, something she originally confessed to in “His Last Vow” and wherein we saw John destroy a memory stick named AGRA. 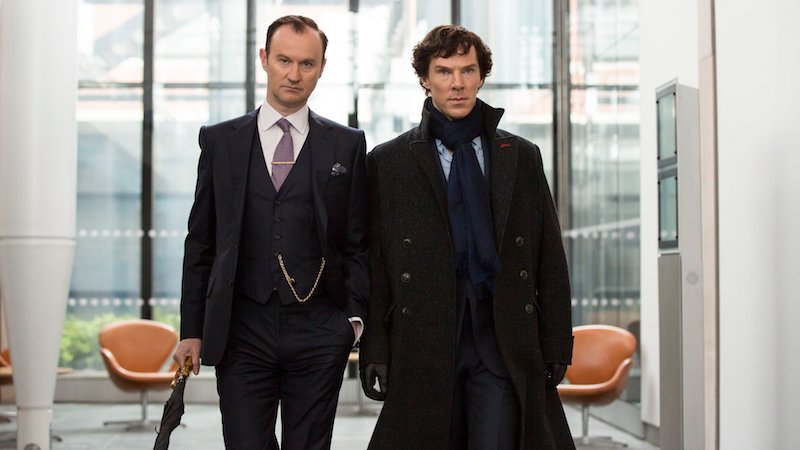 Unfortunately, after a half-hour where Sherlock is his usual unlovable self and solves a few rather sparsely outlined mysteries with smug jokes, “The Six Thatchers” doesn’t know where it wants to go and Mary’s saga is then intertwined with a travelogue conspiracy plot, flirting outrageously with some rather un-Sherlock James Bond and Jason Bourne twists in Morocco, and dealing with betrayed former mercenary colleague Ajay (Sacha Dhawan, brief but effective as the one team member she left behind).

It does struggle to connect the Thatcher worship with sieges, gun-toting, exotic locations, and torture glamour, but Thatcher’s adherence to the privatisation of everything might well have found an equivalent in the modern mercenary for hire. But it’s stretching things to have the Thatcher busts made in Tbilisi so conveniently down the street to Ajay’s escape from his captors in order to make the connection to the Doyle story.

There are longueurs in the final hour, where Sherlock and John are absent, and it doesn’t feel right because the show works best when they’re bouncing off each other during an investigation. This is perhaps why Mary has made her appointment with death, as she’s rather too good to be working with Sherlock and better at the game than John. With a background in special ops, what better way to curtail her agency than to have her go down in a blaze of glory, because after all, “families fall out” whether they’re in 221 Baker Street or Tbilisi.

Well, despite Sherlock’s vow to protect her, John, and their baby, she drugs him and attempts to clean up the mess she’s left behind. There’s that odd little vision that Sherlock has, as he goes under, of two children and a dog that might again have something to do with “the other one” but that might be reading too much into this. Mary’s biggest crime in the episode might be to affect an appalling New York accent on her plane out of London but the images of rolling dice while she earnestly intones “every move is random and not even Sherlock Holmes can anticipate the roll of a dice”, as she makes her Jason Bourne-like journey through Norway and Morocco, are truly horrific cliches. 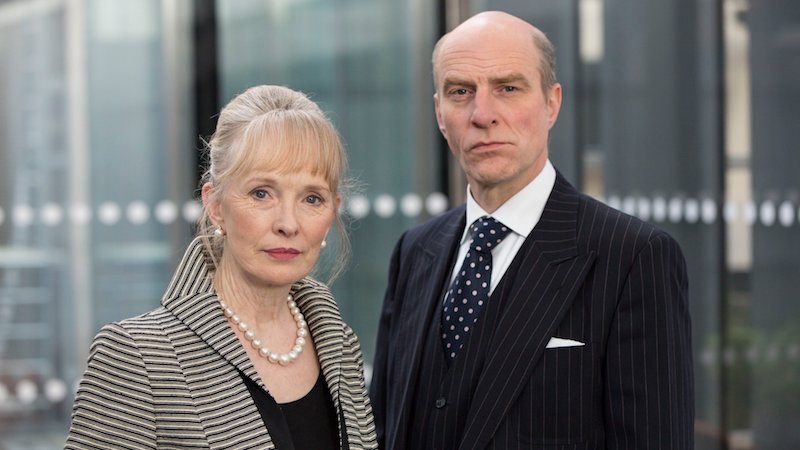 Despite Ajay’s attempts to kill her–she’s “a dead woman walking” sums up her rather precarious existence as a female character within Sherlock–she meets her predictable ending at the London Aquarium after Sherlock discovers her AGRA team were betrayed by the very people who hired them. Mycroft initially puts the finger on Lindsay Duncan’s Lady Smallwood, last seen at the episode’s opening debrief. However, it’s Mivvi-loving Vivian Norbury who confronts Sherlock after he tracks her down from one of the codewords uttered during the debrief and whispered down a phone to the Tbilisi hostage-takers…

The Aquarium setting and its circling sharks are terribly symbolic, bathing the episode with a heightened Thunderball vibe of shark-infested waters and inevitable death, and overseen by a disgruntled Miss Moneypenny in the form of vengeful secretary Vivian. Having killed AGRA, she pulls a gun on Mary and Sherlock but not before starting to tell “An Appointment in Samarra” for the umpteenth time. Yes, we get the allusion that you’re trying to outrun death and your little flat in Wigmore Street. It’s apt that Mary eventually takes the bullet for Sherlock, offering a parallel to her shooting of him in “His Last Vow” as an attempt to out-run her own past. “I think we’re even now, OK?” she gasps on her death bed.

As much as Gatiss attempts to make it an inevitable tragedy and wring out our sympathies the issue here is that I have had no emotional investment in the character of Mary Morstan. Everything in Sherlock is hyper-real (the lifestyles, characters, settings, dialogue), and to try and find remorse for a character in the middle of all this noise can be rather futile. John engages in some sort of primal screaming therapy (subtitled as ‘bewails’ on iPlayer) over her bloody corpse, which doesn’t help Martin Freeman sell the emotion either.

John drowns in guilt over his text affair with the woman on the bus and boils with anger at Sherlock’s self-aggrandisement and failure to save Mary. Sherlock, his arrogance unable to help him deal with John’s rage, seeks therapy. 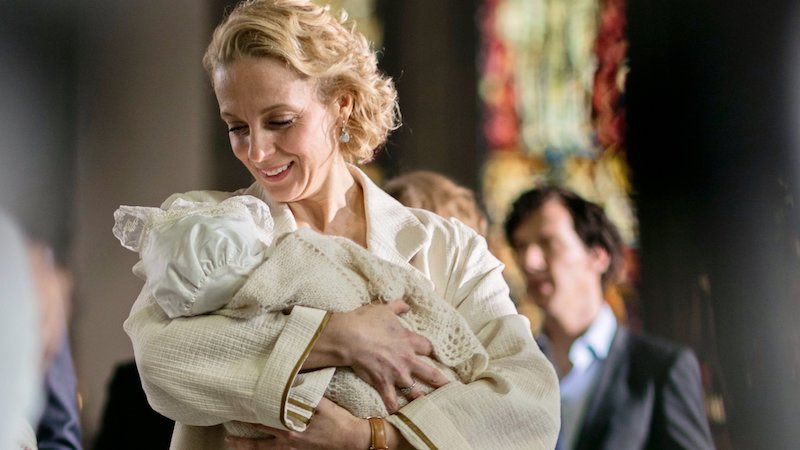 The episode ends mysteriously as a weepy Mrs. Hudson (Una Stubbs) and a tired Mycroft brings us back full circle. Sherlock receives a message from beyond the grave with Mary warning him that her “old life was full of consequences” as she provides him with a new case, to “save John Watson.” Holmes also asks Mrs. Hudson to use the word ‘Norbury’ as a way of telling him when he’s being a bit of a cock. It’s a lift from Doyle’s own story “The Adventure of the Yellow Face” where he tells Watson to do likewise.

Mycroft, arriving home from the office, spies a post-it note on his fridge bearing the number 13 and picks up the phone to call Sherrinford. This must be “the other one”, the other Holmes sibling who’s often been referred to in a number of non-canonical works. Is he about to make his appearance in the series?

It’s probably for the best that John’s arrogant arsehole of a friend goes into therapy. He needs to after a somewhat disappointing opening episode. It’s performed very well, overall, despite some of the banality, and yet, by setting so off many visual fireworks, Talalay’s work doesn’t really help prevent a story with no really juicy villains from being a damp squib. Its pretensions to Bond (the slick visuals too often evoke the work of titles designer Daniel Kleinman) and Bourne, move “The Six Thatchers” rather too far away from the original spirit of the show.