Starz Network, wanting in on HBO’s success with Game of Thrones among others, has invested heavily in adapting Diana Gabaldon’s Outlander book cycle. Having previously inspired a graphic novel and a musical album, the books have been brought to the screen by Ronald D. Moore (best known for his producing and writing stints on Star Trek: The Next Generation and the rebooted Battlestar Galactica) with a 16-episode first season based on her first novel published in 1991 premiering in August 2014.

One of Gabaldon’s widely acknowledged sources for the original novel was Jamie McCrimmon (Frazer Hines), the second Doctor’s Highland companion during Doctor Who’s 1966-69 run. He inspired the book’s 18th Century Scotland setting and, when she introduced the main character of Claire Randall, it was transformed into a time-travel historical romance wherein Claire, a married British nurse from 1945, is transported back to the Scotland of 1743.

A departure for Moore, his acumen has since paid off and the series has been a hit for Starz and Sony Pictures Television. It is not hard to see why. The pilot episode “Sassenach” establishes the world of Outlander with sumptuous location filming in Falkland, standing in for 1940s Inverness, Culcross Palace and Doune Castle. In Inverness we are introduced to Claire (Caitriona Balfe) and Frank (Tobias Menzies) her husband, who is about to embark on a post-war career as a historian at Oxford. 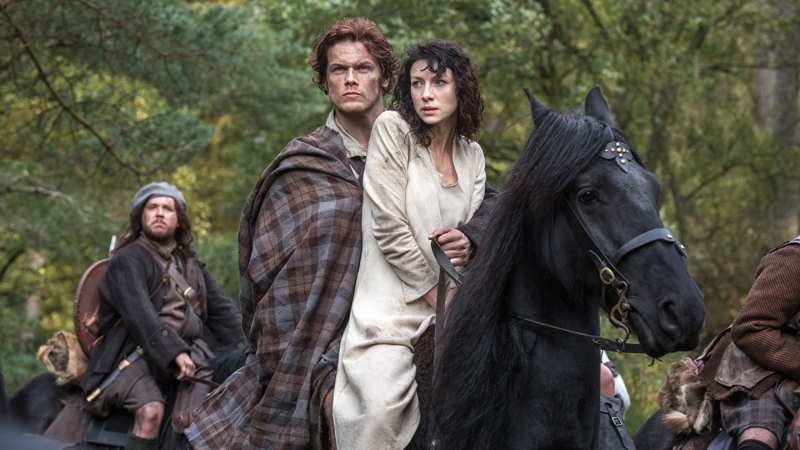 While he unearths the history of his notorious ancestor 18th Century English Army Captain Jonathan ‘Black Jack’ Randall (played by Menzies again), Claire explores the countryside and one morning eavesdrops on a Samhain ritual at the standing stones of Craigh na Dun. The stones transport her to the Scotland and the Jacobite uprising of 1743. She is rescued from the clutches of the Redcoats and their captain, the sinister ‘Black Jack’, by the rebel Highlander Jamie Fraser (Sam Heughan).

The common comparison to Game of Thrones is disingenuous as both series couldn’t be more different. Outlander is, on the surface, a period romance with Claire caught between her desperate attempt to return, via the standing stones, to her husband Frank in 1945 and the growing affection she has for Jamie. Fantasy takes a backseat to a drama about the lives and fates of the Clansmen and how a woman from the 20th Century adapts to the dramatic changes in her circumstances and status.

In “Castle Leoch” she is veritably incarcerated by the Clan MacKenzie in their ancestral home, the ruins of which she had visited with Frank in 1945. It now bustles with life at the gathering of the Clans overseen by the antagonistic brothers Dougal and Colum MacKenzie (Graham McTavish and Gary Lewis, respectively). Although Claire bluffs about her escape from the Redcoats, she is suspected by Colum of being a spy. She is enlisted as a healer, her nursing skills having already been put to good use saving Jamie’s life on her journey to the castle. 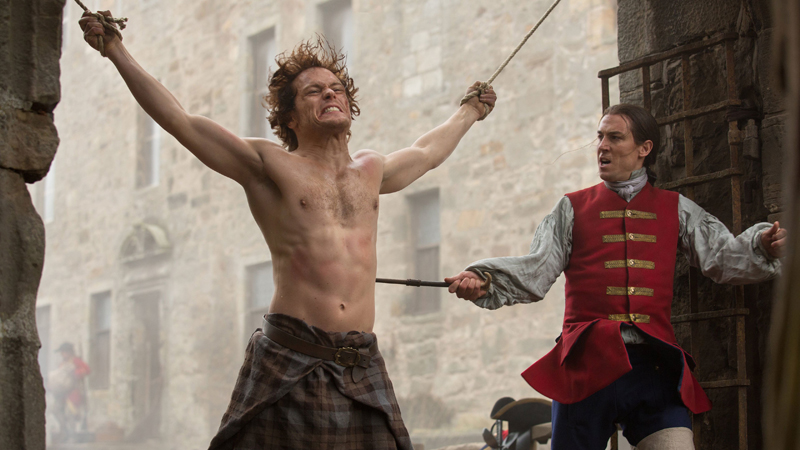 Her attempts to escape, her befriending of local healer Geillis Duncan (Lotte Verbeek), the unwanted attentions from Dougal and her gradual attraction to Jamie are contrasted with flashbacks to her Inverness honeymoon with Frank. However, the early attempts to use Claire’s voice-over to recapture the first person narration as established in the books can be annoying. It doesn’t quite work and instead self-evidently restates aspects of her dilemma that are more than adequately communicated by Caitriona Balfe on screen. As the series progresses it’s less distracting and the inner monologues are better integrated with her performance.

During an evening’s entertainment in “The Way Out” Claire is inspired to return home by a song about a woman travelling back and forth through the standing stones but “Rent” sees her plans thwarted when she is sent on the road with Dougal and solicitor Ned Gowan (Bill Paterson), collecting the rents for Colum. She discovers they sequester funds for a Jacobite rebellion by using Jamie’s badly scarred back, the results of ‘Black Jack’ Randall’s vicious flogging, as a way of gathering sympathy for the Stuart cause. Claire realises she is now woven into key moments in Clan history, including their impending defeat at Culloden. 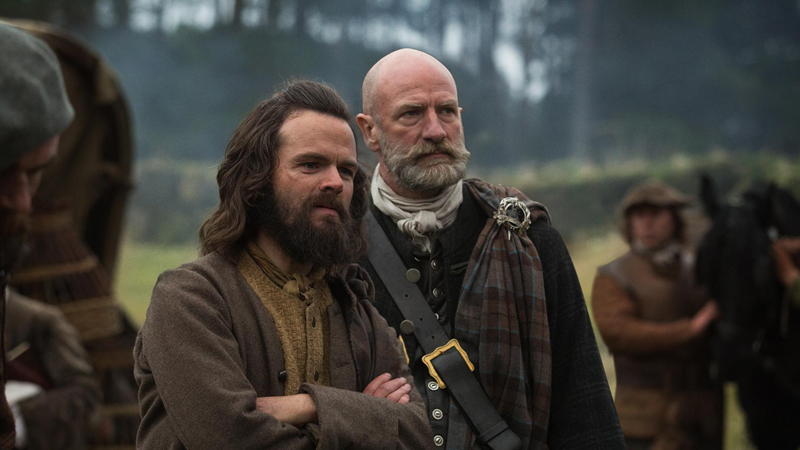 This meticulous world building is well realised, acted and beautifully produced but it stubbornly avoids answering the larger questions left in the minds of the audience. You could be forgiven if at this point in the series you politely decided not to continue. That would be a mistake because there is a spectacular change in tone in the sixth episode, “The Garrison Commander”.

Claire and Dougal are escorted by Redcoats to meet with their commander and she again encounters ‘Black Jack’ Randall. He is deeply suspicious of her loyalty to the King and believes she has vital information about the Clan MacKenzie’s financial support of the Jacobites. During a tense interrogation Randall’s reputation for breaking his subjects is recalled in flashback with his violent flogging of Jamie. It is a no holds barred sequence, extremely violent and disturbing and driven by a powerful performance from Tobias Menzies.

Randall’s dark heart is exposed, particularly when he orders one of his men to kick Claire senseless, and it foreshadows the degradation he subjects Jamie to at the end of the series. Fortunately, Dougal interrupts and removes her from Randall’s custody. Dougal realises she must become a Scottish subject and arranges for her to marry Jamie to circumvent any further interrogations under English Law. 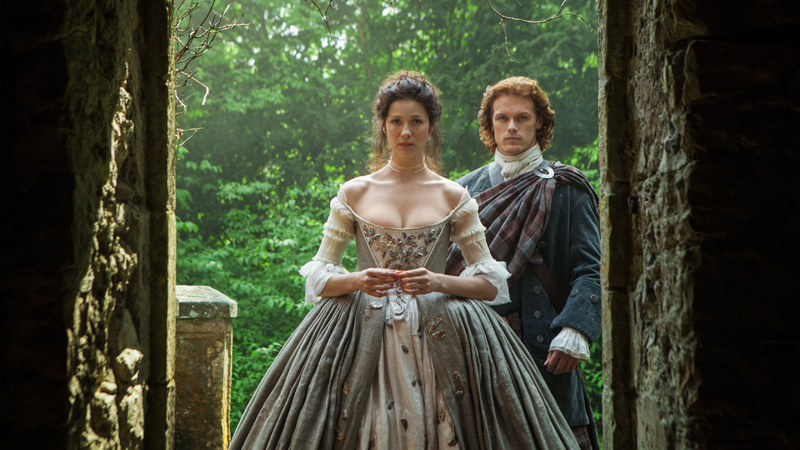 “The Wedding” deals with the emotional and physical consequences of Claire and Jamie’s enforced marriage, featuring sex scenes and nudity that equal Game of Thrones’ casual authenticity yet carry the romantic intimacy appropriate to these characters. Critically, “Both Sides Now” returns us to Frank’s desperate search for his missing wife in 1945 at Craigh na Dun and Claire’s decision to remain in 1743 after her connection with him across time is cut short by marauding Redcoats and she is forced to again confront ‘Black Jack’ at Fort William. Writer Ronald D. Moore and actors Balfe, Heughan, and Menzies just about convince us that Claire’s marriage to Jamie now means as much to her as the one she shares with Frank.

The bitter politics raging in the Clan MacKenzie, the attempt to elicit a pardon for Jamie from the Duke of Sandringham (a delicious turn from Simon Callow) and the fallout from Claire’s relationship with fellow healer Geillis preoccupy the episodes opening the final half of the season. Ira Steven Behr’s “By the Pricking of My Thumbs” offers an adroit summary of these subplots and Toni Graphia’s “The Devil’s Mark” reworks the fears, superstitions and power of false accusations found in Arthur Miller’s The Crucible. Embodied in Tim McInnerny’s performance as Father Bain, these connect to the time travel sub-plot after Geillis’s origins are revealed when she faces being burnt at the stake as a witch. Despite her own callous manipulation of the Clan MacKenzie, Geillis’s self-sacrifice is an honourable one. 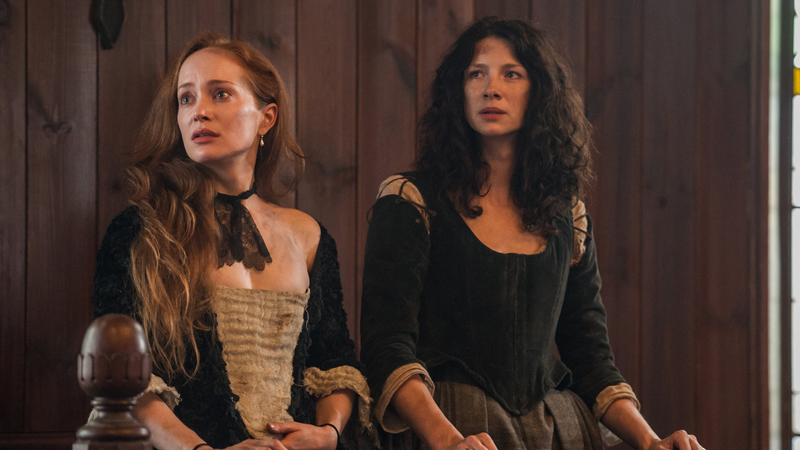 A shocked Claire tells Jamie the truth about her own fantastic journey from the future to the Scotland of 1743. It’s a scene that finally underlines how much we’ve come to care about these characters and cements the trust between them. Claire and Jamie return to his ancestral home in “Lallybroch” and we meet a whole host of new characters, including Jamie’s no-nonsense sister Jenny (a standout performance from Laura Donnelly).

“Lallybroch” develops the main characters effectively and considers the aftermath of Jamie’s flogging, how Randall has hurt not just Jamie and Claire but also abused Jenny. However, subsequent episodes tend to slow the series down again. “The Watch” and “The Search” take an awfully long time to set up Jamie’s involvement with Horrocks (Lochlann O’Mearáin), a Redcoat deserter who blackmails Jamie and betrays the band of rebels led by Taran MacQuarrie (Douglas Henshall) when they plan to raid a rent collection party. It’s the growing bond between Claire and Jenny that lies at the core of “The Search” when the two women join Murtagh (Duncan Lacroix), Jamie’s godfather, to rescue Jamie from incarceration.

That search leads into a brutal finale and some of the darkest, disturbing episodes of television I’ve seen in a while. Again, “Wentworth Prison” and “To Ransom a Man’s Soul” confound any remaining preconceptions of Outlander as a picturesque, romantic, Walter Scott-inspired adventure. The mixture of nobility and violence in Scott’s novel Waverley inspires an effective cameo from none other than Frazer Hines as the prison warder but these are overwhelmingly grim episodes from Ira Steven Behr and Ronald D. Moore, depicting ‘Black Jack’ Randall’s humiliating and perverse torture of Jamie in the dank bowels of Wentworth Prison. 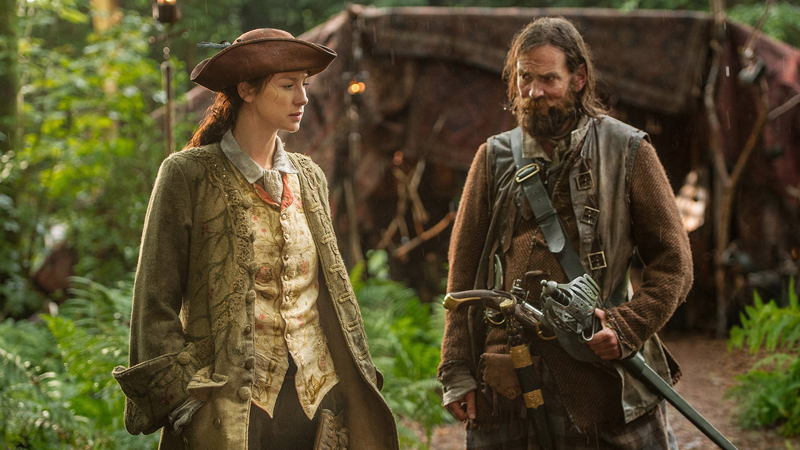 Both writers do not flinch from the psychological scars of male rape and sexual victimisation. It chimes with all manner of contemporary issues—the use of male rape as a weapon of terror in warfare, the stigma of relenting to such physical responses and, in the aftermath, the male coping strategy of refusing help to overcome such trauma. All praise to Sam Heughan and Tobias Menzies who clearly used every ounce of their acting skills in these extraordinary episodes to produce utterly convincing, affecting performances. Little wonder this innocuous-looking fantasy drama has an 18 rating from the BBFC.

It is a relief that the gloomy finale concludes on a note of triumph that sees Claire and Jamie reunited and escaping to France. It symbolises Outlander’s episode-by-episode dramatic contrasts, jumping between the bleakest, harshest of human interactions to soft focused, golden hued intimacy played out against the stunning backdrop of the Highlands. The imagery used to sell the series, capitalising on its romantic time travelling themes, does not even begin to scratch beneath the surface to its deeper engagement with politics, patriarchy, feminism, sexuality and the inevitability of history.

The Collector’s Edition Blu-Ray and DVD was not available for review but judging by the picture quality of the high-definition episodes screened on Amazon Prime the release shouldn’t disappoint. On the set you’ll find plenty of behind-the-scenes features about the making of the series, 8 audio podcasts with Ronald D. Moore, an extended edition of the episode “The Reckoning” (exclusive to Blu-Ray), and over 30 deleted scenes.

Written By
Frank Collins
More from Frank Collins
“The Return of Doctor Mysterio” is, as Steven Moffat has acknowledged, an...
Read More