Entering the second half of this first season, and “The Adversary” was an instalment that moved things forward in surprising ways. In some respects, it now feels like the preceding hours have been baby steps for the audience (easing us into this world, laying down the rules, and giving us a good foundation to build from), but now the gloves are coming off, as the scope and complexity of what’s happening started to come into sharper focus.

The most straightforward subplot this week belonged to The Man in Black (Ed Harris) and Teddy (James Marsden), as they continued their hunt for Wyatt and found themselves captured by soldiers from a Union Army outpost who recognised Teddy as one of Wyatt’s accomplices during a massacre of their men. There wasn’t much more to this storyline, although it was a surprise to find that Teddy overshadowed the MIB in the ‘bad-ass’ stakes, after escaping his bonds to mow down every last soldier with a hand-cranked gatling gun. We’re so used to the MIB being the person who does the unthinkable to get whatever he wants, that it was strange seeing him in awe of affable Teddy’s bloodthirsty actions. It also helped get me excited for their continuing adventures, now Teddy’s very clearly an equal to the MIB, and also more unreliable because his relationship with Wyatt is much closer than we’d been led to believe. 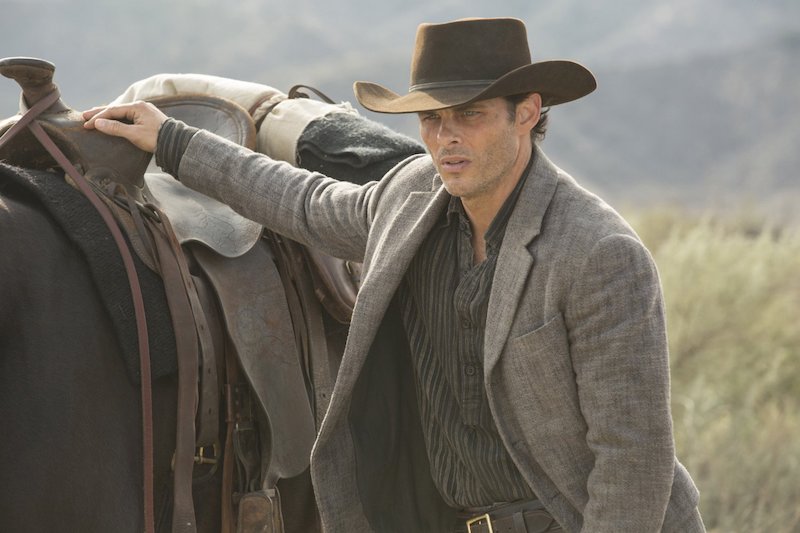 And, for those interested by the show’s mythos (which is surely everyone), it was also interesting to note that Teddy is aware of the Maze the MIB is seeking, saying:

The Maze is an old Native myth. The Maze itself is the sum of a man’s life. The choices he makes. The dreams he hangs on to. And there at the centre there is a legendary man who had been killed over and over again countless times but always clawed his way back to life. The man returned for a last time to vanquish all his oppressors in a tireless fury. Built a house and around that house he built a maze so complicated only he could navigate through it. I reckon he’s seen enough fighting.

It still seems very likely that the “legendary man” in Arnold, the park’s co-creator, who everyone seems to think it dead. And maybe he is, as I still think Arnold found a way to put his consciousness into a Host and is effectively immortal as a result. But we’ll wait and see if that theory holds water.

We also saw many new areas of Westworld this week, which really helped expand our sense of this whole environment. In particular, it was fun to see that a mountain-top area of the park (known as Mesa Gold) has been set aside for the higher-ranking employees to relax in. We caught up with Lee Sizemore (Simon Quaterman), the head of narrative whose nose was put out of joint by Ford (Anthony Hopkins) awhile back, as he drowned his sorrows, tanned his pale body, and bitched to Theresa (Sidse Babett Knudsen) about the months of creativity his boss flushed down the drain.

This was also the storyline to introduce Charlotte Hale (Tessa Thompson), whom Lee mistook for a beautiful park guest, but who was later revealed to be a representative from the all-powerful Board. It’s been known Thompson was cast on the show for awhile now, so it was great to actually see her at last, and it suggests she’s going to make some of the behind-the-scenes interplay a bit more interesting. Lee’s attracted to her, but has made a very bad impression (drunkenly urinating on the control room’s 3D map) after initially impressing her with his insights, so I’m hoping there’s going to be an engaging love story there. Or maybe not. But it’s good to shake things up behind the curtain. 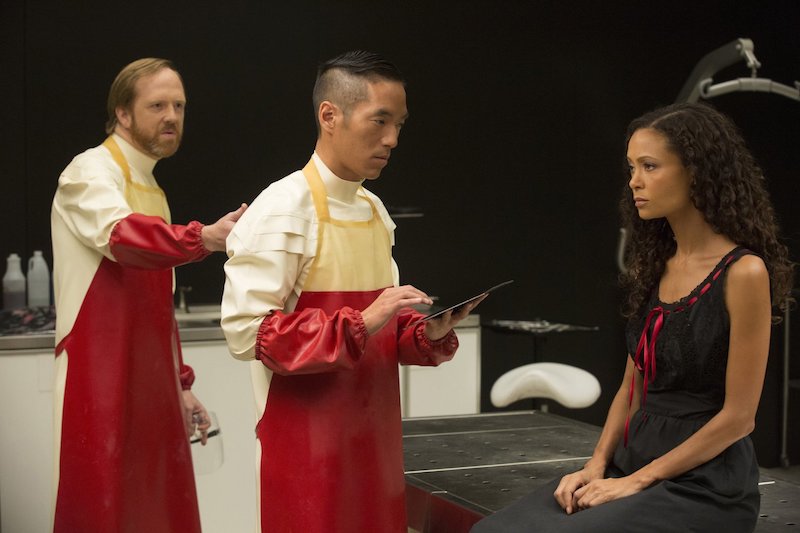 And that’s exactly what’s happening with the two ‘butchers’, Felix (Leonardo Nam) and Sylvester (Ptolemy Slocum), who are being cleverly manipulated by Maeve (Thandie Newton). We all know the end-game of Westworld is for the Hosts to become conscious and start slaughtering their human enslavers, and Maeve seems to be at the vanguard of that—despite it appearing like Dolores was going to fulfil that role when the premiere aired.

Maeve’s now able to wake up during her repair jobs, so has started to voluntarily get herself killed, and is demanding answers from Felix about her identity and the truth of her existence. I’m not entirely convinced by how this is being portrayed, if I’m honest, because Maeve’s essentially a woman from the 19th-century suddenly being asked to comprehend difficult ideas like artificial intelligence and immersive theme park experiences, but I guess you just have to accept she’s quick study. And we did get the earlier scene in the show when she freaked out over seeing the inner workings of Westworld, so perhaps it’s not too much of a stretch to believe she’d be so calm about things. I also liked the moment Felix proved she basically has no free will, as a tablet was able to predict every word she spoke, which resulted in her temporary shutdown when faced with such a mind-bending truth.

“The Adversary” could be named after a number of different characters, with some yet to be seen, but Maeve seems to be the biggest antagonist when it comes to the safe running of the park. By the end of the hour, she’s successfully persuaded Felix and Sylvester to modify her programming, which included elevating her intelligence to the maximum level, so she’s clearly going to be even more of a problem both inside and outside the park. I just wonder what her grand plan is, as overthrowing the system isn’t going to be easy, no matter how intelligent you are. It was interesting to realise that Maeve’s programming had already been altered, too, and that suggests Arnold is still trying to give his creations consciousness. 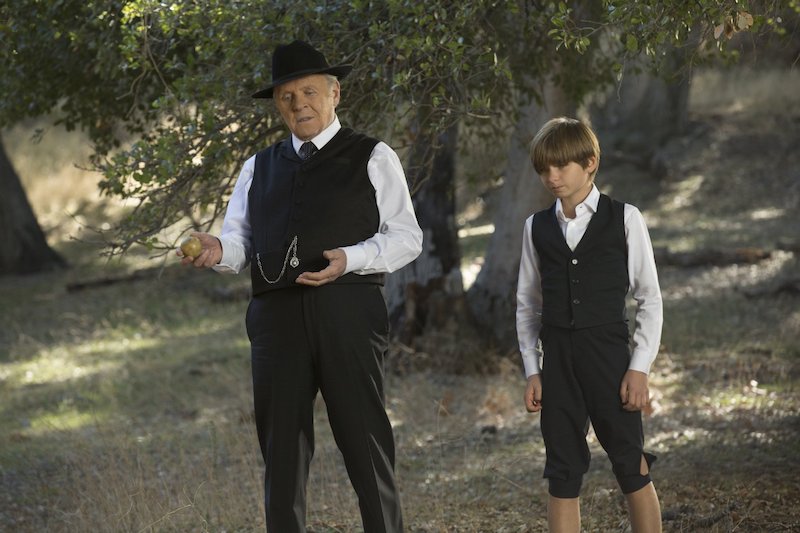 Speaking of Arnold, who is clearly the key to understanding a great deal about Westworld’s past and its present, we came to realise that he’s been remotely programming first-generation Hosts (which I presume includes Maeve), and that Theresa’s the person who’s been smuggling data off the park. It’s still unclear where that data’s going, but a competing business seems the most likely answer—although there’s been no evidence of that. I guess it’s possible Theresa is getting information to Arnold, wherever he might be, but a lot is unclear right now. But we do know that Arnold is very much around, if perhaps not “alive” in the normal sense of the word, with Ford also saying “great artists hide themselves in their work” (a clear nod that Arnold’s woven himself into the fabric of Westworld somehow).

Also, when Ford interrogated the little boy Host about why he killed his pet dog, he was given the answer that Arnold ordered him to. So it seems that Arnold only has a kind of backdoor control of the first-generation robots he created, which in some ways contains the park’s growing problem somewhat—but I have a feeling Maeve and/or Dolores are going to be spreading their unique programming to the newer Hosts before too long.

It was also great to get an answer about the aforementioned little boy that Ford’s often seen talking to, as Bernard (Jeffrey Wright) discovered there are a surprising number of unregistered Hosts moving around the park, and one family unit (including the little boy) has been based on Ford’s family from his days growing up in Cornwall. As some of the last remaining Arnold-made Hosts, Ford can’t bring himself to destroy them, and they’re a welcome link to the happier times of his past. But it seems that Ford’s nostalgia and reverence for his old partner’s work will be his undoing.

Overall, “The Adversary” was yet another very strong episode of Westworld and an hour that certainly started to dive deeper into the storytelling and enrich everything we knew, or thought we knew. Lee’s possibly going to use his sway with Charlotte to undermine Ford’s position as the park’s almighty Director, Maeve’s now highly intelligent and will undoubtedly start plotting to let her kind know what’s really going on, and Bernard realises he’s been sleeping with a woman guilty of corporate espionage. Exciting times ahead!