There’s one indelible image that confirms director David Lynch hasn’t only returned, 26 years later, to that Pacific north-western town Twin Peaks, but has also picked up the reins left unattended since his last feature film, Inland Empire (2006). It’s of a twisting highway, framed by trees, and illuminated only by car headlights. A tracking shot propelled from the vantage point of a car at night — that reoccurs in Blue Velvet (1986), Wild at Heart (1990) and Lost Highway (1997) — suggests that Lynch is back on that road with Twin Peaks: The Return, taking an uncompromising journey into the heart of darkness.

That same descent into hell permeates the opening two-parter of Lynch’s 18-episode film for television. And if you think you knew Twin Peaks, then think again. That droll melodrama belied its cheery coffee and cherry pie exterior with a murder that spiralled into a horrific examination of grief, incest, and a half-seen, inscrutable ancient battle between an evil inter-dimensional force and the pure-hearted FBI Agent Dale Cooper (Kyle MacLachlan). 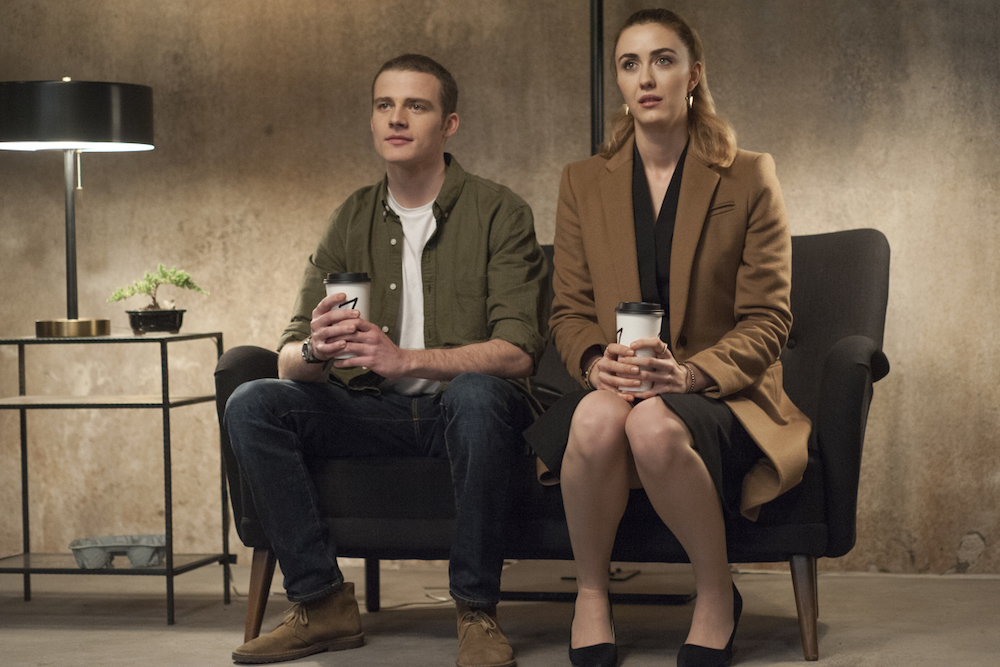 There was always something nasty and unnameable lurking in the woods, and no manner of quirky subplots and slapstick humour could get in the way of Cooper’s eventual possession by BOB — that demonic creature bringing death and corruption to so many in such an unassuming small town. Lynch has ventured deeper into the woods and eschewed the damn fine cup of coffee this time round. In Twin Peaks: The Return, pretty much all the of the soap opera pastiche, the jazz noir inflections of Angelo Badalamenti’s iconic music, and the transposition of 1950s Sirkian melodrama onto 1990s postmodernism have been scraped away.

There are nostalgic flickers of the past but the tone is instead dour and fearful, with a constant sense of impending doom punctuated by unfettered violence that matches Lynch’s misunderstood but brilliant prequel Twin Peaks: Fire Walk With Me (1993). That film was a traumatising experience, showing us how the murdered Laura Palmer (Sheryl Lee) spent her last days trapped on a carousel of drugs, violence, and incest that tipped her small town life into a pitch black dimension filled with feral demons and saturnine ritual murder. 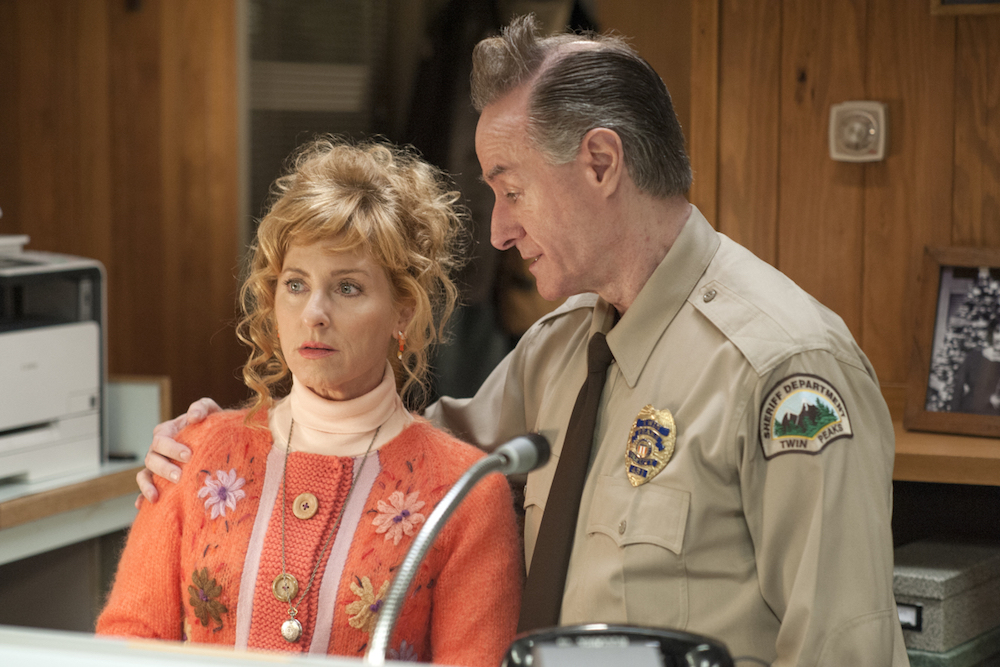 There’s an increasing feeling of motion sickness as Lynch’s camera swerves across the infamous zig-zag pattern of the floor of the Black Lodge, that eldritch alternate dimension where the dead Laura promised the trapped Dale Cooper he would see her again in 25 years. And so he does. Lynch pulls the past forward, stalking down the corridors of the high school, replaying in slow motion the anguish of a high school girl hearing the news of Laura’s murder, and tracking into that framed picture of the homecoming queen before Badalamenti’s theme strikes up and those neon green words Twin Peaks fade into view.

Lynch intimates the logging town never recovered from what it experienced. Today, there are no saw mills or factory (save one dormant chimney), no birds, and no welcome sign declaring a population of 51, 201. But the waterfall and the trees remain as a constant reminder of the unknown power of nature. The Snoqualmie Falls dissolve into a swirling mass of red curtains and the zig-zagging floor of the Black Lodge, to suggest an ancient force at the heart of that realm. 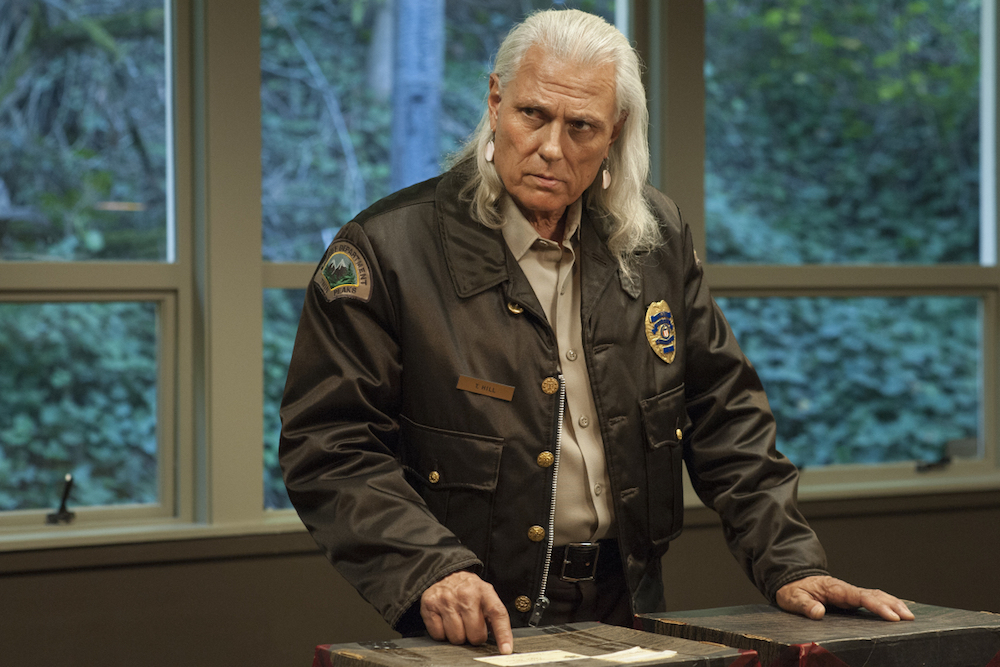 So, what do we get now that Twin Peaks has returned in a post-Sopranos, post-Mad Men era, to sit alongside many of the current dramas it clearly influenced? Three converging subplots and a lot of time spent away from Twin Peaks itself form the backbone of this opener. In Buckhorn, South Dakota, there’s the murder of missing librarian Ruth Davenport at the hands and fingerprints of the seemingly unimpeachable school principal Bill Hastings (Matthew Lillard) — poor Ruth’s severed head left in attendance on the pillow above an obese male body curled up in her bed.

The discovery of Davenport’s ‘body’ is a classic slice of left-field Lynchian humour, as two policeman attempt to track down someone, anyone, who owns a key to her apartment. As Hastings is interrogated by the police there are touches of that old Twin Peaks melodrama as the facade of his marriage disintegrates into a venomous standoff with his adulterous wife Phyllis (Cornelia Guest). 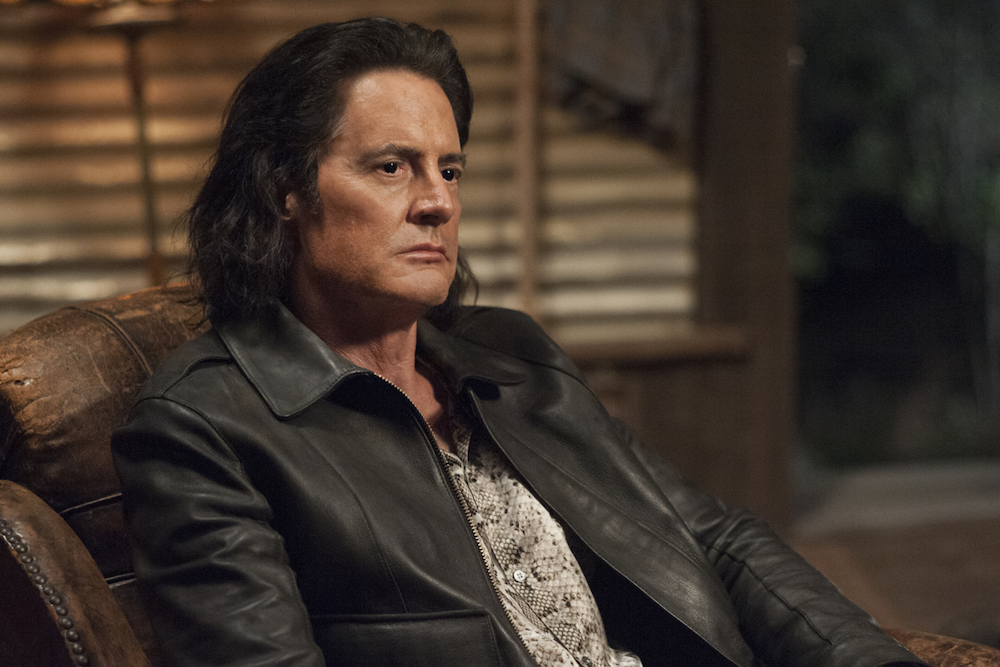 In New York, there’s the strange vigil of the glass box attended by young student Sam Colby (Ben Rosenfeld) and a battery of cameras awaiting the arrival of ‘something’ through a portal. When he’s seduced by the coffee proffering Tracy (Madeline Zima), all hell breaks loose from said box and they disappear beneath a blurred, undefined ghostly shape in a welter of blood. Later, Dale Cooper emerges from some inter-dimensional portal and floats into the same box. It’s like a womb, giving birth to Lynch’s latest singular take on Twin Peaks, where Showtime have let him off the leash. And the box brings the opening two hours to a close by looping back to the start of the episode to repeat a scene of Tracy and her object of affection concerned about the disappearance of the guard normally stationed outside the warehouse containing the box. Lynch loves to fracture time and space.

Most importantly of all there’s the alter-Coop: the BOB-possessed Cooper who’s been out there terrorising the world for the last 26 years. A long-haired tyrant, his face as leathery as his jacket, his manner’s as slippery as his snakeskin shirt, and whose reign is being challenged by his grubby associates as he ploughs his was way through swampy motels and backwoods shacks populated by hooch-drinking hillbillies. MacLachlan is clearly relishing the opportunity and he’s utterly chilling as alter-Coop. He despatches traitors with a pillow muffled shot to the head. But his time is running out because the Black Lodge wants BOB back. 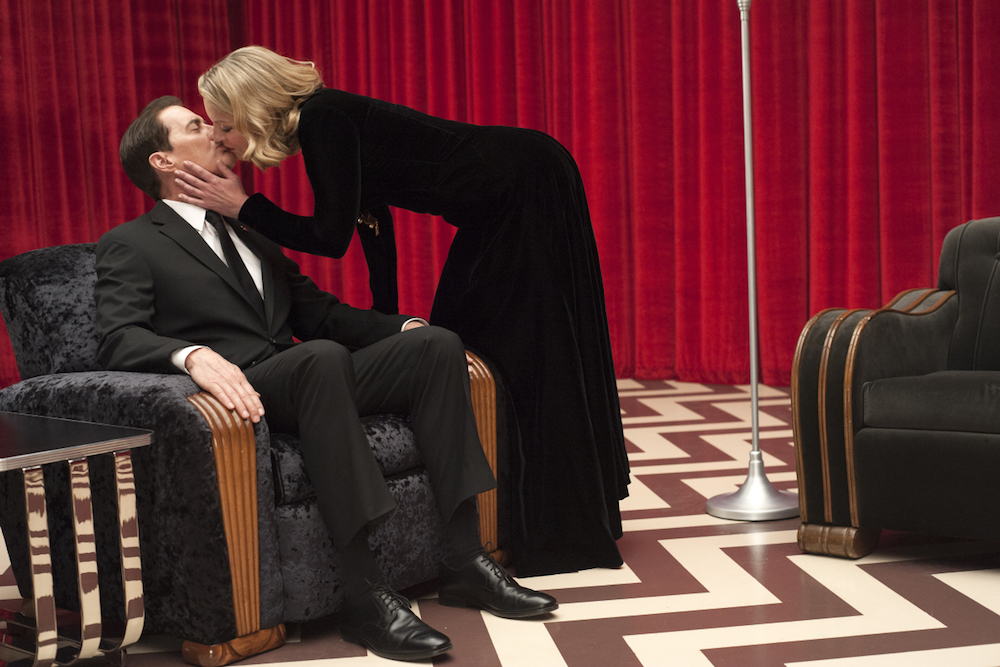 The real Cooper learns from many familiar faces that he has to leave the Lodge in order for BOB to return: the giant (Carel Struycken), an older Laura Palmer, the one-armed Mike (Al Strobel), Laura’s defeated father Leland (Ray Wise), and a talkative lump of flesh sitting on an electrified sycamore tree — a long distant cousin of Eraserhead’s unearthly baby replacing Michael Anderson’s diminutive, dancing, backward talking Man From Another Place. It’s so absurdly surreal in the way only Twin Peaks can be.

Cooper falls through a fracture in the Black Lodge’s dimension as Deputy Hawk (Michael Horse) stalks through the Douglas Firs, while Margaret Lanterman, the legendary ‘Log Lady’ (played by the late Catherine Coulson), offers him the latest from her wooden oracle: “something is missing and you have to find it. It has to do with Special Agent Dale Cooper. The way you will find it has something to do with your heritage. This is a message from the log.” 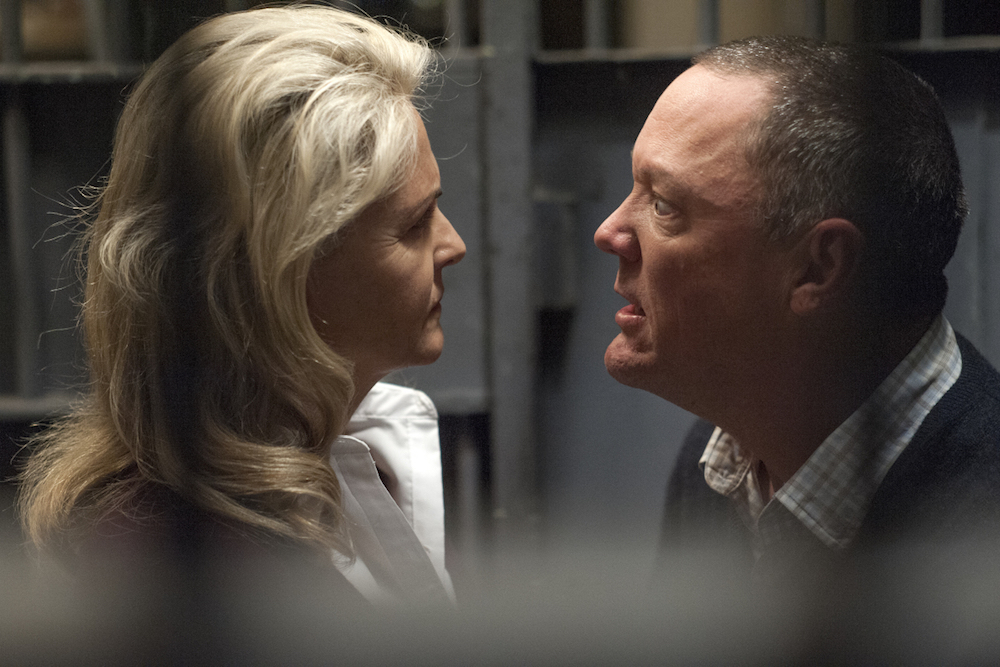 Hawk’s vigil, plus the brief glimpses of Andy (Harry Goaz) and Lucy (Kimmy Robertson), the Horne brothers Ben (Richard Beymer) and Jerry (David Patrick Kelly), and Dr. Jacoby (Russ Tamblyn) taking a delivery of shovels, culminate in two pure doses of Twin Peaks nostalgia: a still strung-out Sarah Palmer (Grace Zabriskie) caught in a hall of mirrors reflecting from her TV a disturbing natural history programme on lions, and the closing scene in the Bang Bang bar as ageing biker James Hurley (James Marshall) locks eyes with Shelly Johnson (Mädchen Amick). Her friends ridicule him but she assures them that “he’s always been cool.”

The story now takes in several locations other than the familiar town, and is all the better for it, emulating the way Twin Peaks: Fire Walk With Me brought in new characters and locations. And the mysteries are already piling up: what has gone missing that connects to Deputy Hawk’s heritage, who set up the glass box, what connection will the murder of Ruth Davenport have to BOB’s violent spree, and how will Cooper get back to our dimension?

It’s a disconcerting two hours, underpinned by a harsh sound design full of subterranean rumblings, scratchings, screams, and white noise — an industrial soundtrack that would not be out of place in most Lynch films. It adds to the sense that some strange force is about to be released and this time Lynch is doing it on his own terms for Showtime; opting for a surreal, often ludicrous, disturbing jigsaw puzzle of sequences that are harsher and colder than anything seen before in the series. It will alienate some and bewilder others but I’ve already accepted its invitation to love.