And so another season of Outlander comes to a close. The finale, “Eye of the Storm”, is something of a mixed bag. It didn’t have the valedictory feeling of “Dragonfly in Amber” that closed season 2, and left us with the possibilities for Claire (Caitriona Balfe) to return to Jamie (Sam Heughan). The third season certainly fulfilled this promise, with some excellent episodes, but the hurried wrapping up of “Eye of the Storm” betrays some of the uneven qualities of Outlander’s tendency for a shorthand adaptation of Diana Gabaldon’s book Voyager.

Unfortunately, the Geillis Duncan (Lotte Verbeek) character just didn’t work for me. I think the issue here is that a lot of the book’s nuances about Geillis’ motivation, how the gemstones enable time travel, and the consequences of the prophecy made by the Campbells, were either reconfigured or lost altogether. These are important aspects of the story going forward, so it’s slightly unsettling to see quite a bit of it sidelined or jettisoned this early. It’s possibly being held back for season 4 but, here, Geillis simply becomes a caricature of a villain, with the prophecy directly linked to her attempt to travel in time to murder Brianna. 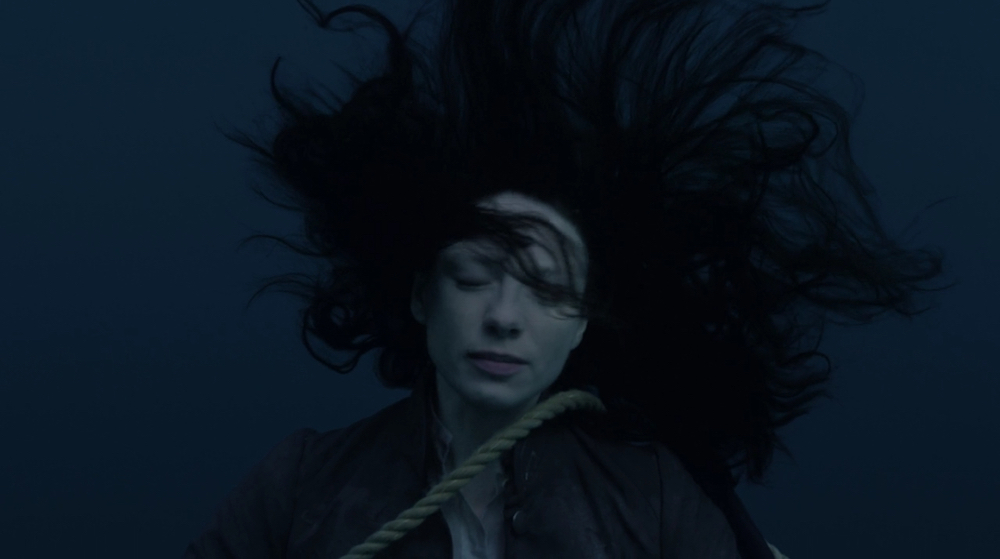 “Eye of the Storm” offers a series of very contrasting elements and none more so than the opening sequence where Claire, drowning, declares “I was dead… free of terror… free of rage… filled with a quiet happiness.” Essentially, it’s an in medias res moment the episode then hurtles through at breakneck speed to explain. We find ourselves back at Geillis’ estate as Claire searches for Ian (John Bell) after Jamie’s (Sam Heughan) arrest by Captain Leonard (Charlie Hiett). If we were in any doubt about Geillis’ penchant for virgin boys, Claire uncovers the grisly evidence before she, too, is captured and dragged off to an encounter with this rather unhinged woman.

Fergus (César Domboy) and Marsali (Lauren Lyle) set off to help Claire and Jamie, after receiving a message about Jamie’s arrest, but they’re not very involved in the story as such. However, Jamie has the good fortune to have Lord John Grey (David Berry) on his side. Before Captain Leonard can get Jamie aboard the Porpoise, Grey’s troops prevent his extradition. Grey wipes the floor with Leonard, giving David Berry an opportunity to show again how good he’s been as Grey in this year’s episodes. Hopefully, we’ll see more of him in the future. With Grey pulling rank and entangling Leonard in legal issues and paperwork, the Captain’s unable to evidence Jamie’s guilt and doesn’t have the power to arrest him. Jamie once gain owes his life to Grey who observes “seems we’re indebted to each other so many times, I’ve lost count.” 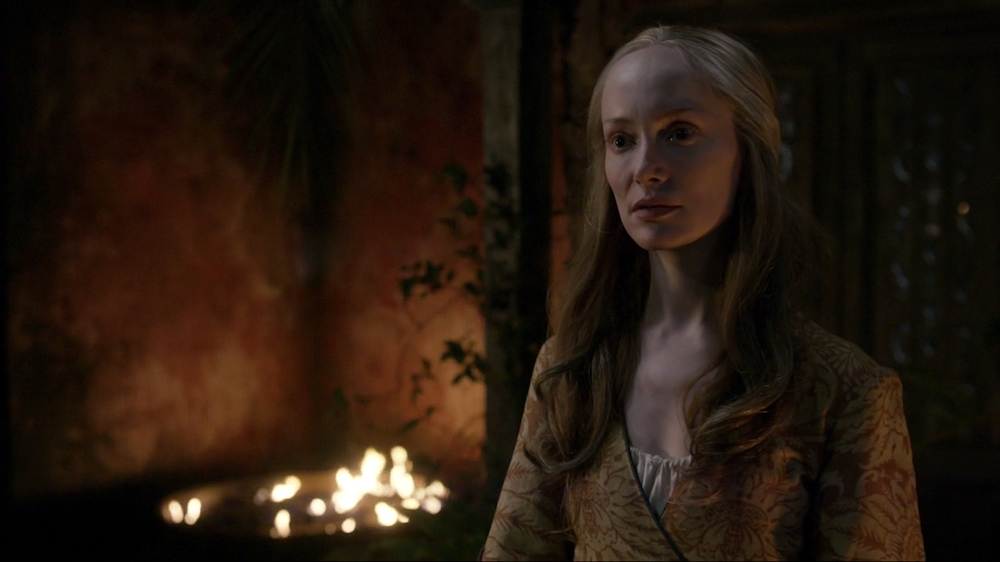 The deranged Geillis is convinced Claire knew about the sapphires and their link to the prophecy, believing Claire’s travelled back in time merely to prevent her bizarre attempt to restore Scotland’s sovereignty. Ian is carted off to his fate as a sacrifice to the powers that Geillis is harnessing for her scheme. Confronting Claire, she comes across as a paranoid figure. At first she pretends to believe Claire’s story that she and Jamie were merely looking for the treasure to pay a debt. Claire, rather stupidly, provides photographs of Brianna to back up her story that she originally returned to the 20th-century in an effort to save the life of her unborn child.

When Claire mentions that Geillis actually met Brianna in Inverness before she murdered her husband and went through the stones herself (which Claire and Brianna were witness to), it sets Geillis off on her course to assassinate Claire’s daughter, the prophecy’s so-called 200-year old child. It’s all rather overwrought as a subplot but, thankfully, it doesn’t last long. The importance of gemstones and a sacrifice to enable time travel isn’t debated because Claire, who needed neither, believes that travelling through the stones has “something to do with who’s on the other side, drawing you to them.” 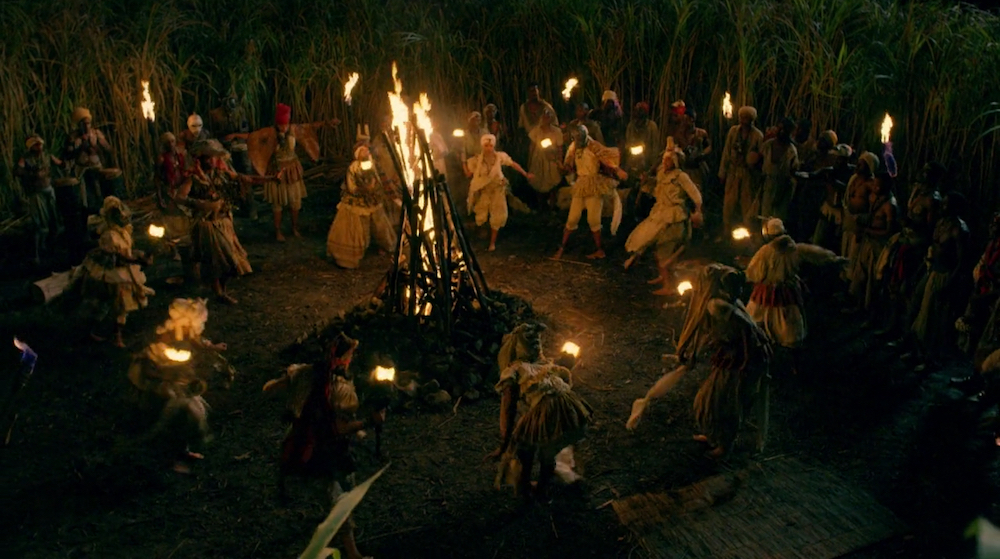 Claire sees Ian being taken away and sets off in pursuit. Both she and Jamie stumble across a tribal ritual taking place in the middle of the estate. Although the ceremony offers a link to the dawn ritual Claire once witnessed at the stones of Craigh na Dun, it happens without any real link to the sacrificial ritual that Geillis is cooking up. What does seem rather implausible is that Jamie and Claire should be spared from a dubious private ceremony, itself full of contentious racial stereotypes and imagery, by the dint of Mr Willoughby’s (Gary Young) sudden appearance. Willoughby is another character who hasn’t really worked this year. The scene that follows just exacerbates the lack of well prepared back story.

Willoughby explains, rather ineffectively, that because the workers heard of Margaret Campbell’s powers, they invited her here. Lo and behold, there’s Margaret (Alison Pargeter), everything’s okay, and Willoughby declares his love for her, saying “she was the first woman to truly see me and the man that I am. And I see her. We wish to be together.” This is a major development since last week’s episode and may take some believing. We then get Margaret initiating the strange flashbacks to Jamie seeing the rabbit on the field at Culloden and the bird on Claire’s windowsill perhaps as reinforcement for what Claire believed was the force that drew her back through the stones to Jamie. Even stranger is the moment when Margaret seems to become Brianna, kisses Claire and calls her “momma.” Then Willoughby has a punch up with Margaret’s brother Archibald (Mark Hadfield) and kills him. There’s a sense here of throwing in so many disparate elements as possible at this stage, without enough context, and it feels too contrived. 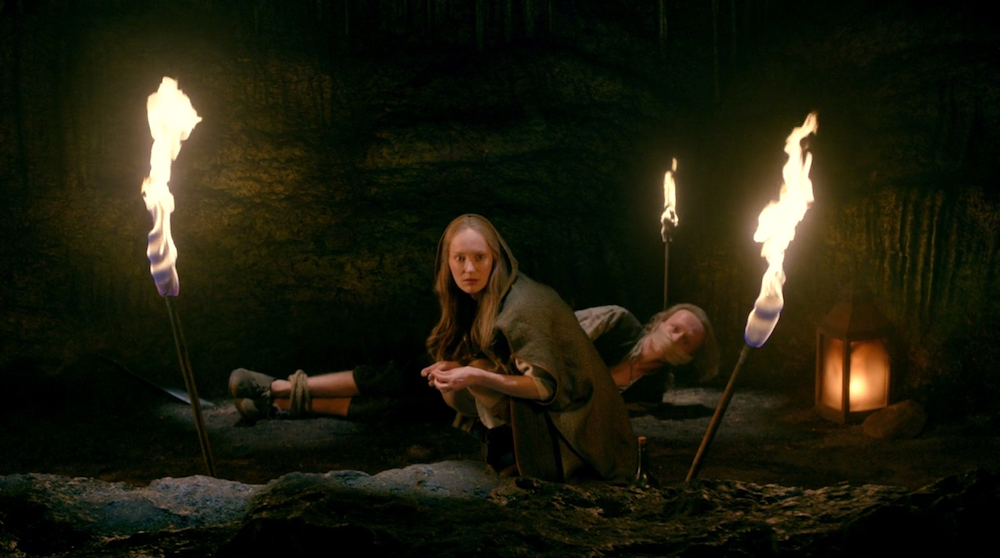 The plantation workers offer Jamie directions to the sacred cave of Abandawe, which we’ve been hearing about for several episodes. Realising what Geillis intends to do when she discovers one of her photographs of Brianna is missing, Claire and Jamie attempt to halt her ritual. They discover a strange pool in the cave, the time portal that exists in this time and place, and Geillis on the brink of sacrificing young Ian for her nefarious scheme. Jamie is rather sidelined by Geillis’ manservant Hercules and doesn’t get to do the heroic stuff, leaving Claire to step up as Geillis drones on that they “have a responsibility to change history. I gave up my child for the cause. You have a responsibility to do the same.” Thankfully, Claire nearly slices her head off and kills her to prevent the completion of the prophecy. We’re also given a reminder that the bones she and Joe Abernathy looked at in the hospital were Geillis’ own remains, as long suspected. The shock of it’s nicely played by Caitriona Balfe and helps to ground many of the risible elements in this finale.

With 25 minutes to spare, we’re whisked away from Jamaica, the warrant on Jamie’s head is magically dispensed with through the efforts of Lord John Grey, and Jamie and Claire can settle down, relax and, in what has become a rather formulaic way of concluding their escapades, have their usual reward of post-adventure sex. That moment of peace is disturbed when a colossal storm, stunningly achieved by Outlander’s production team, wrecks the Artemis and Claire goes overboard, drowning in the scene that opened the episode. 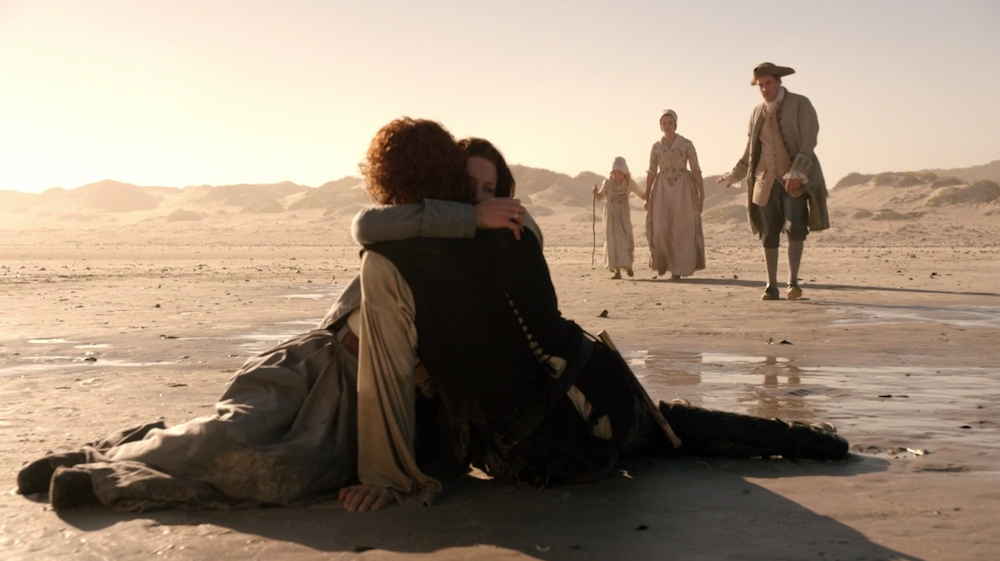 After Jamie comes to her rescue, they drift on the wreckage, their isolation brilliantly captured in an amazing pull back from the ocean to a stunning view above the eye of the storm. Eventually, and it does require another leap of faith with this storytelling, they’re washed ashore in America. The locals mention other survivors so, presumably, Ian, Fergus and Marsali are among them.

After a slightly disjointed season finale, a new chapter begins for the Frasers when they also discover they have landed in Georgia on the brink of the Revolution. What’s the betting they’ll not stay out of trouble?