If you’ve been wondering where that dead Bengal tiger came from, “Virtù e Fortuna” is quick to confirm it arrived from a neighbouring park, replicating the British Raj period of Indian history. We’ll call it “Raj World”. Nice use of a sitar version “Seven Nation Army” by The White Stripes on the soundtrack during the opening, too.

Inside Raj World, two guests are enjoying their time going big game hunting and drinking tea: Nicholas (Neil Jackson) and Grace (Katja Herbers), who sleep together after a rather troubling moment when Grace ascertains whether or not Nicholas is “real” by shooting him in the chest. Her paranoia over who’s real or not isn’t explained, but it’s interesting she would presumably have given Nicholas the brush-off if he was a host programmed to think he’s a guest. Having sex with robots doesn’t seem to phase most other people visiting the Delos parks.

This scene also reminded me how unclear things are about how weapons work in the parks, frankly. If Nicholas had been a host, Grace’s shot would have “killed” him? So the same bullet would have somehow caused more damage to his body? But we later see that host’s can shrug off a gunshot wound, so that can’t be true. And if guns inside the parks are about as dangerous as a BB gun to the humans inside, to keep guests safe, what great threat are the self-aware hosts unless they gain access to outside weaponry? 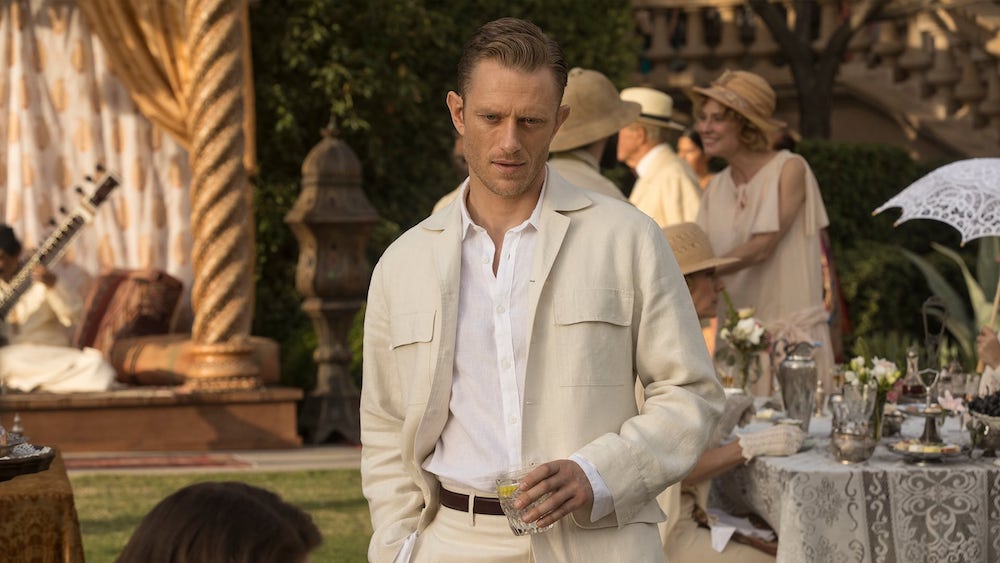 Regardless of those head-scratchers, the situation with the hosts realising the truth of their existence isn’t contained to the Westworld park. Grace and Nicholas find their fellow guests have been massacred at a nearby camp they arrive at by elephant, and I think this entire sequence was therefore happening concurrently with the season 1 finale.

Nicholas is ironically killed by a shot the chest (so now the park’s weapons can kill humans just fine?), and Grace runs for her life into the territory of a Bengal tiger that chases her beyond Raj World’s boundary. She escapes by jumping into a large lake, followed by the tiger as she manages to get a shot at it, and by the end of the episode she’s seen dragging herself ashore into Westworld… to be surrounded by the Ghost Nation tribe.

It seems Grace is going to be someone of real importance going forward. We don’t really know who she is yet, so let your imaginations run wild! She could be a known character’s girlfriend or wife, which would make her fling with Nicholas a little more troubling. Could she even be the Man in Black’s daughter, Emily, using a false name? It seems like Grace will be taken by the Ghost Nation to wherever they’d holding Ashley Stubbs (Luke Hemsworth), Westworld’s former head of security, last seen being ambushed by that same tribe.

There’s also the question of this strange map Grace has drawn in her notebook, which features two interlocking hexagonal shapes. It looks like a map of the park and thus suggests she has insider knowledge of where she is. Maybe she’s even on a secret mission to do something from within that’s been interrupted? 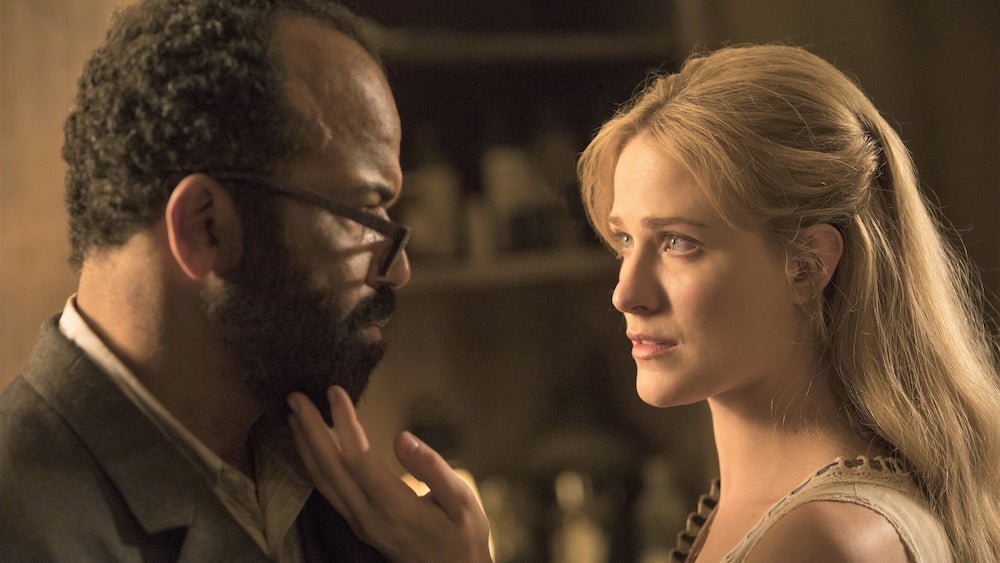 We’re a kind that will never know death, and yet we’re fighting to live. There is beauty in what we are. Shouldn’t we try to survive?—Dolores

In the present day of Westworld, Bernard (Jeffrey Wright) is taken to the Mesa Hub by Karl Strand (Gustaf Skarsgård) and his security team, where he’s reacquainted with Charlotte Hale (Tessa Thompson). This triggers a flashback to their earlier time together in the park, trying to find Peter Abernathy (Louis Herthum), the host Charlotte selected to smuggle restricted information out of the parks inside his head.

To be honest, I’m not a fan of the time-jumping this season. It’s a little confusing and not always obvious when things are taking place, chronologically. There’s no visual distinction between past and present, in terms of how the scenes are colour graded, or how characters appear in terms of their clothing and suchlike. This was ideal when disguising season 1’s biggest twist (that two storylines were happening decades apart), but with Bernard it just adds a confusing angle on how the story’s unfolding.

I know a few casual viewers (i.e. people who just watch the show and don’t read about it online) that didn’t even realise the scene with Bernard discovering that lake of “dead” hosts happened after these scenes with Bernard and Charlotte trying to find Abernathy.

However, it was relatively clear that most of Bernard’s storyline this week was a flashback, and it was fun seeing him work alongside Charlotte to rescue Abernathy from outlaws holding some park guests hostage, led by Rebus (Steven Ogg). I particularly enjoyed it when Bernard captured Rebus, reprogrammed him to be a virtuous gunslinger, then sent him back to free his prisoners. But poor Abernathy’s clearly not himself these days, and when a group of Confederados arrive on the scene they’re all split up. Charlotte escapes, but Bernard and Abernathy are taken prisoner and sent to Fort Forlorn Hope. 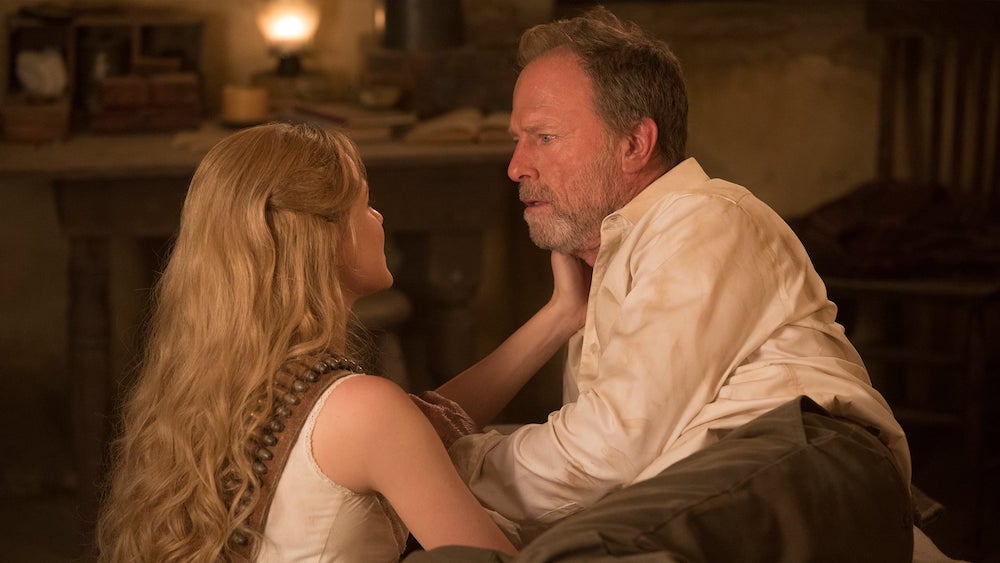 You don’t remember. He’s my father. My home. Look what I’ve done to him. You’re all I have left now, Teddy.—Dolores

Dolores (Evan Rachel Wood), Teddy (James Marsden), and Angel (Talulah Riley) are already at Fort Forlorn Hope with Major Craddock (Jonathan Tucker), and easily manage to convince Colonel Brigham (Fredric Lehne) to join them in fighting the 600-strong Delos army preparing for battle. All it really took was handing him a modern machine gun to play with.

After Bernard and Abernathy arrive at the fort as prisoners, there were some interesting scenes involving those characters and Dolores. She has a long history with both of them, even if Bernard doesn’t remember the moments Dolores shared with Arnold (the human co-founder of the hosts he was built by Ford to replicate). There was a beautiful scene where Dolores went to see her glitching father Abernathy, and for a brief moment reverted back to her original sweet rancher’s daughter persona while reminiscing over their life together with him. In some ways, deep down, maybe she pines for the time when things were simpler, even if her life was a lie.

Bernard later realises that Abernathy is malfunctioning because there’s a large encrypted data file stuck in his head, and that his whereabouts is being tracked. Fun note that Abernathy always quotes Shakespeare when he’s faulty, and in this episode he appropriately quoted the confused King Lear talking to his daughter Cordelia: “I am bound / Upon a wheel of fire, that mine own tears / Do scald like molten lead.”

The attack on the fort was the action highlight of “Virtù e Fortuna”, although it didn’t do much to astonish me. It was cool seeing the Delos forces descend on the fort with modern guns and desert buggies, but there wasn’t much here that was memorable or very exciting. And when Dolores signalled for Angel to shoot some nitroglycerin, the resulting game-changing explosion didn’t look all that impressive.

Still, Charlotte and the Delos team arrived at the fort and managed to take Abernathy away (with Bernard powerless to stop them because he’s started malfunctioning again), and Dolores was proven to be an untrustworthy ally because she locked her own army inside the fort and had them shoot dead the Colonel’s men outside. It may have been part of a plan to delay them entering so they could ready the nitro explosion, but it was an ignoble move that Craddock was understandably upset by.

Speaking to that, there were signs Teddy is beginning to question Dolores and her style of leadership. After being ordered to take Craddock and his men away to shoot them, he instead shows mercy and lets them go. Dolores sees this happen from afar, and one gets the feeling Teddy’s loyalty is now in doubt. Although maybe Dolores will see his disobedience as a good thing, as it also demonstrates his growing sense of free will? 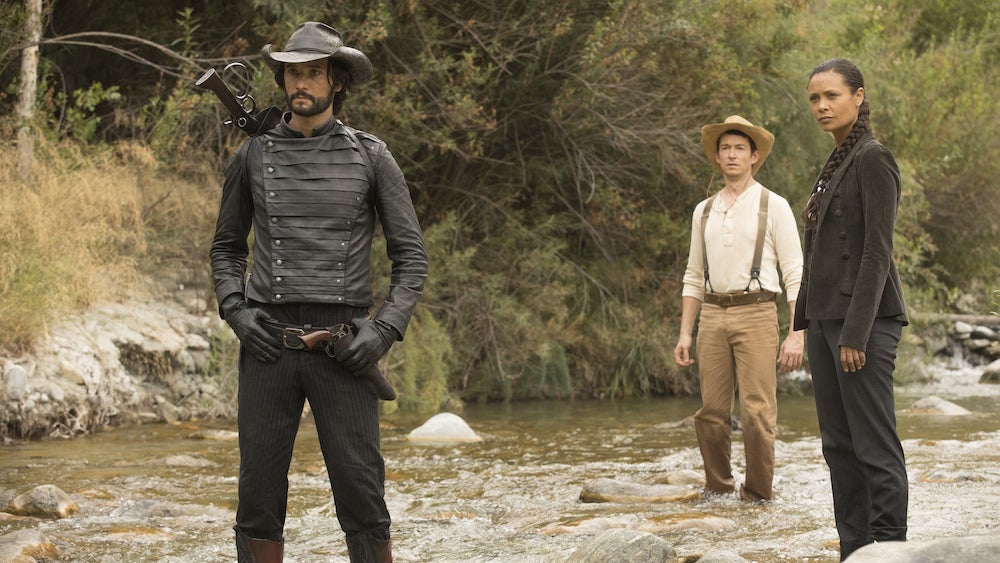 Maeve (Thandie Newton), Hector (Rodrigo Santoro), and Lee Sizemore (Simon Quaterman) had a much better storyline this week, as they encountered the fearsome Ghost Nation tribe and Maeve discovered she doesn’t have the ability to control them like other hosts.

Lee is also starting to realise just how far the hosts have stretched their programming, because the relationship Maeve and Hector have shouldn’t be possible because Hector’s love for Isabella is a fundamental part of his coding. Indeed, it seems that Lee created Hector as something of an idealised alter ego of himself, which now lends their scenes together a bit of added intrigue. Lee’s essentially been taken hostage by his own imagination come to life. But there are also signs Hector isn’t as independent as Maeve, as Lee’s able to predict some of his dialogue, which is another hint that the level of self-awareness in hosts isn’t equal. Maeve and Dolores are fully sentient, while the likes of Teddy are developing that way, but Hector’s free will is a slight delusion, while other hosts don’t seem to have altered very much.

Maeve’s gang eventually reunite with Armistice (Ingrid Bolsø Berdal), now wielding a flamethrower, after retreating to an underground access point to escape the Ghost Nation on the surface. And there was a fun moment when Maeve found her “friends”, nerdy lab techs Felix (Leonardo Nam) and Sylvester (Ptolomy Slocum), who were manipulated into helping her break her programming. And, after heading back to the surface, they find themselves in Shogun World — with a samurai rushing at them, about to strike with his katana. 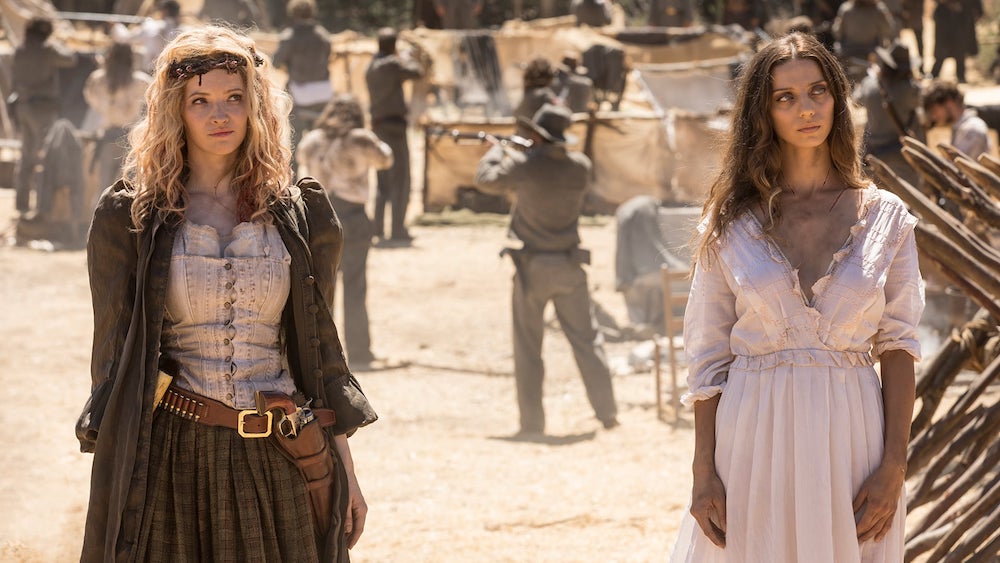 The title of the episode, “Virtù e Fortuna” comes from Renaissance philosopher Niccolò Machiavelli’s The Prince. Virtù doesn’t mean “virtue” in the usual sense, but more the ability of a leader to decide the best way forward depending on circumstances, while “fortuna” means things outside of someone’s control. It’s tempting to see Dolores as this kind of ruler, having to navigate both things to succeed in her aims. But is she more the virtù half, with Maeve’s ability to control (some) hosts equalling the “fortuna” part? If so, it’s another hint they’re going to have to work together to get what they both want.

“Virtù e Fortuna” itself was a solid episode that wasn’t particularly thrilling, even during its action sequences. The tiger attack and fort battle were fun to watch, however. There’s always something to take away from episodes of Westworld, but by the end of this episode not much had really changed. The biggest event was the introduction of Grace, whose scenes bookended the episode, as otherwise it was just more of the same. Dolores is on a power trip that’s going to start making her more enemies than allies, Maeve is consolidating her forces, and Bernard’s condition is worsening (to the point where people may start suspecting he’s not human).

An episode of gentle intrigue and some fun reveals, but I’m still waiting for the hour where Westworld season 2 really comes into focus and feels as gripping as the show did last season.

THE AMERICANS, 4.8 – ‘The Magic of David Copperfield V: The Statue of Liberty Disappears’