It makes sense for Star Wars to exploit its rich 40-year history, so it’s little wonder the best moments of Star Wars: The Last Jedi lean on classic characters, reference famous shots, or repeat well-trodden themes. Star Wars: The Force Awakens (2015) won acclaim by erasing the stench of George Lucas’s overblown prequels, but there was criticism over how much it used Star Wars (1977) as a template. I understood the rationale for it being so similar, but only to a point, because do you really need to reintroduce people to Star Wars? It’s never been far from the public consciousness.

Star Wars: The Last Jedi is less beholden to the previous seven (or eight) movies in terms of its structure, although it flips The Empire Strikes Back (1980) by ending with a land battle on a snow (well, salt) planet. There are analogs to events from Return of the Jedi (1983), too, and just like Empire it’s a “darker” chapter involving a young protagonist being trained to become a Jedi, and a big twist you won’t see coming — albeit nothing on the scale of “… I am your father”. Oddly, it’s one draft away from concluding this sequel trilogy early, as Episode IX doesn’t have much left to do. 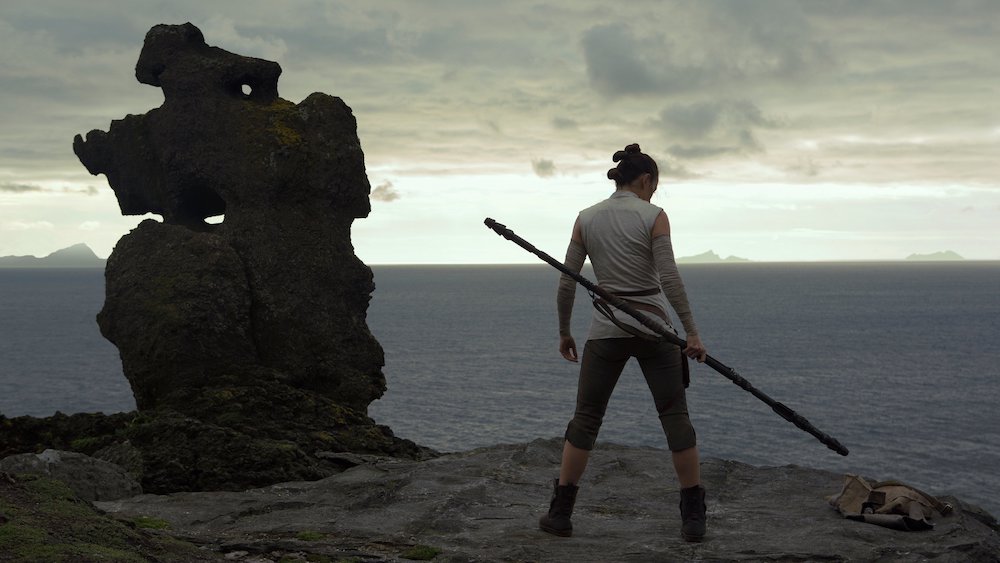 The temptation to dive into spoilers is agonising, because most of The Last Jedi’s best moments are the surprises the narrative pivots around. It zags when you expect a zig. If you love Star Wars, you’ll love seeing more Star Wars, but I’m sure some of writer-director Rian Johnson’s additions to the mythos will sit uneasy with fuddy-duddy fans. But what better way to keep Star Wars alive and exciting than by messing with the formula? Perhaps acting on complaints The Force Awakens was too reverential to the past, it seems rich to now take issue with Last Jedi plowing its own furrow.

Rian Johnson continues the creative upswing of The Force Awakens, in terms of its balanced approach to mixing practical and digital F/X, and there’s plenty of thrilling action and beautiful location shooting — particularly at Skellig Michael in Ireland. It also feels like less of “an event” than any previous Star Wars movie, because it’s only been a year since Rogue One: A Star Wars Story (2016) and these characters aren’t new to us.

The movie is divided into three storylines that gradually coalesce. The Resistance, led by General Leia Organa (Carrie Fisher), get into a pickle after destroying a Dreadnought ship, finding themselves pursued by the First Order with diminishing fuel reserves. Consequently, Finn (John Boyega) and maintenance worker Rose Tico (Kelly Marie Tran) go on a secret mission to the gambling planet of Canto Bight to find a codebreaker who can disable General Hux’s (Domhnall Gleeson) tracking of the rebel fleet at lightspeed. And, finally, we have Rey (Daisy Ridley) returning Luke Skywalker (Mark Hamill) his lightsaber, only to realise the Jedi Master isn’t keen to train her in the ways of the Force, and doesn’t have much to say about his sister Leia’s belief he’s the “spark” of hope needed in the galaxy.

I enjoyed The Last Jedi deal because it contained plenty of emotional highs, supercharged due to my childhood connection to this saga, but most of its storylines weren’t especially good in isolation. The worst is undoubtedly Finn and Rose’s distracting heist to a world redolent of the prequel aesthetic, which doesn’t earn the romantic pay-off it lurches towards, and feels like a backwards step for such a favourite character. Finn was hilarious during The Force Awakens in simpatico with Rey on their adventure, and there was huge potential in his bromance with X-Wing “flyboy” Poe Dameron (Oscar Isaac), but The Last Jedi burdens him with a love story/side quest that’s less involving.

The Resistance fending off the First Order is another subplot that sometimes feels like it’s stuck in a holding pattern, with Poe believing a mutiny’s the only way to break the deadlock after Leia’s injured and purple-rinsed Vice Admiral Amilyn Holdo (Laura Dern) takes over. Poe learns a valuable lesson about quelling his impetuous nature and listening to wiser voices of authority, but it feels a shame this storyline grounds Poe for a long period. I do wonder if an early draft had Poe and Finn pulling off the heist together, until they realised a lack of characters means there wasn’t enough happening with Leia.

What rescues The Last Jedi, in so many ways, is the compelling dynamic between spirited Rey, grumpy recluse Luke, and his psychotic nephew Ben Solo/Kylo Ren (a fantastic Adam Driver ). The story goes out of its way to deny audiences the anticipated joy of seeing Luke teach Rey to become a Jedi, but I appreciated how things don’t go smoothly. Immediately setting the tone, Luke tosses away the lightsaber that Rey handed him in The Force Awakens’ cliffhanger…

There did come a point when I wasn’t sure what was being achieved by eschewing Luke making Rey his padawan, but things came together by the end with a heartrending moment echoing the famous binary sunset sequence in Star Wars. The idea Rey’s more attuned to the Dark Side was fascinating and frightening in equal measure, and having Kylo disrupt Rey’s training and coerce her thinking (through an unexpected psychic communion they share) was a fantastic development. Likewise how “the truth” of what happened between Kylo and Luke was revealed to Rey, Rashomon-style…

I don’t want to focus too much on Last Jedi’s missteps and slightly frustrating lack of development in some areas, it mostly packs in plenty of thrills as it walks a less predictable path than the box-ticking Force Awakens. It also benefits from Hamill pouring everything he’s got into this darker take on Luke Skywalker, Adam Driver relish a more nuanced take on villainy than the comparatively two-dimensional Anakin Skywalker, and the sadness of Carrie Fisher’s death lends unexpected weight to several scenes she had in her final screen role as Leia.

A few of the movie’s braver moves have been spoiled or heavily implied through marketing, but there remains great uncertainty hanging over where Episode IX can go next. Solving this will be a daunting challenge for J.J Abrams (who’s returning to conclude this trilogy), because in some ways The Last Jedi’s success is built on its willingness to do things expected of a finale.

Star Wars: The Last Jedi opened on a tidal wave of acclaim and is definitely a great time at the cinema with a tub of popcorn, but it’ll take a few more viewings to fully evaluate its position amidst its predecessors.

It’s better than any of the prequels in terms of the filmmaking quality, strength of characterisations, and emotional impact of where the story goes, but I’m not sure it rivals the cleaner sweep of The Empire Strikes Back. It’s perhaps on par with The Force Awakens, only with bigger surprises and less debilitating reverence for Star Wars lore, but it’s telling that all the best moments evoke the original trilogy. Old fans will perhaps get the most out of this experience, as Star Wars has been part of their lives for decades, but that’s not to say younger fans raised on the prequels (god help them) won’t get a lump in the throat at times.

While Disney’s new trilogy hasn’t put a foot disastrously wrong yet, it’s clearly indebted and overshadowed by the towering cultural achievement of George Lucas’s originals. Anything post-Return of the Jedi (1983) is unnecessary fan-fiction with blockbuster budgets, to an extent, but the franchise is being respected in spirit, and the young at heart are enjoying take their own children to a galaxy far, far away…