“Dragonfly in Amber” avoids the elephant in the room. The season-long build-up to the devastating battle of Culloden is simply that, a slowly mounting, unfulfilled tension that provides the fuel for a different kind of resolution in this year’s finale. The tragedy of that day’s cultural genocide takes place off screen, perhaps held back until next year where the story might return to Jamie Fraser’s fate. This is probably a very wise move on the part of the producers because they have a heck of a lot of back-story to cover, to provide necessary closure and launch us into the next season. Trying to fit in a full-scale battle, among all the other narrative strands, was never really going to be an option.

The episode, therefore, opens at the wake of Reverend Reginald Wakefield in 1968. Wakefield was last seen helping Frank and Claire come to terms with their reunion in 1948, and if you’re a keen viewer you’ll know that 1968 is an important year. A hanging narrative from season 1 is due to be picked up again and we’re about to be introduced to two very important characters. The scenes in 1968 also fill in details the producers elected to withhold from the season premiere, of the original timeframe Diana Gabaldon’s book traces. Here, we discover what became of Claire Randall (Catriona Balfe) after she left with Frank to start her new life in Boston, USA. Frank has since died and Claire has returned to Inverness with her daughter Brianna (Sophie Skelton), the child she and Jamie conceived before the tragic circumstances of Culloden forced them apart, and whom we last saw as a little girl in “Faith“. 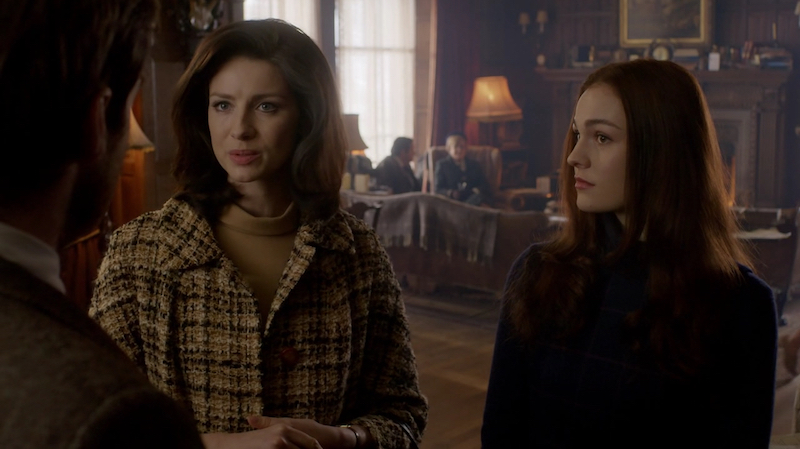 The major concerns of the finale, then, are with Jamie’s legacy. Not only is his grown-up daughter unaware of her true lineage, but the Reverend’s adopted son Roger Wakefield (Richard Rankin) is also about to discover how his own birthright ties into the history of the Clan MacKenzie. If you wondered about the fate of the child, born to Geillis Duncan (Lotte Verbeek) and Dougal MacKenzie (Graham McTavish), then this episode answers those questions. Once again, the past reaches out to influence the present, underscored with the ironic use of The Four Tops “Reach Out (I’ll Be There)” as Brianna and Roger set off to unearth her mother’s connection with the history of Scotland and a fervent nationalist Gillian Edgars.

The song is as destabilising and incongruous a pop culture reference as the opening’s use of a monochrome John Steed and Emma Peel episode of The Avengers, as the guests at the wake keep their children entertained with a television hit of the era. Why The Avengers? Well, apart from its use as shorthand for ‘the Sixties’, I think it says something about the emancipated female figure of Emma Peel as a reflection of Claire’s own feminist projection onto 1745. Emma’s lost husband Peter Peel also haunted the Steed/Peel relationship just as Frank ghosted Claire and Jamie’s marriage. “Dragonfly in Amber” deconstructs the marriage of Frank and Claire, courtesy of Brianna’s uncovering and interpretation of her ‘affair’ with Jamie, but it also proposes that, unlike Emma’s eventual reunion with her husband Peter, Jamie is long gone, never to return to Claire. Or so we are led to believe. 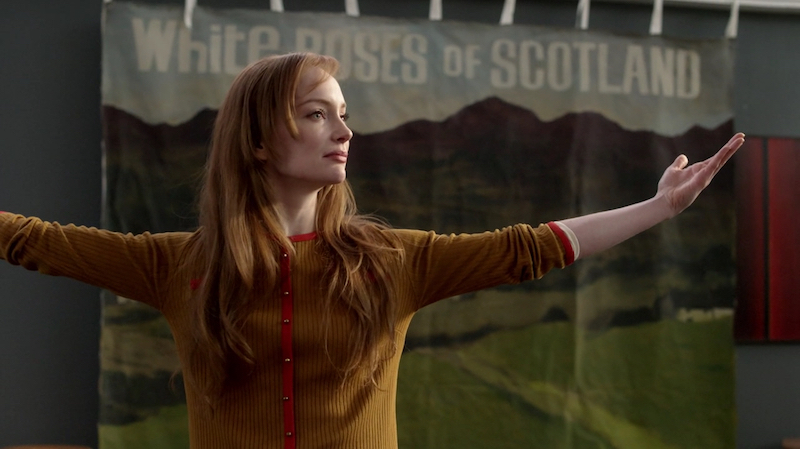 This is Outlander’s great romance seen through the prism of modernism, albeit one primarily couched in the architecture, fashions, music, and television of the late-’60s. More importantly, this modernist setting also depicts a ‘free Scotland’ movement driven by an electrifying young woman Gillian Edgars (Verbeek’s contemporary alter-ego Geillis Duncan), lecturing in the library that Brianna and Roger visit on their genealogical trek. Many viewers will smile wryly about this episode’s timing in this post-fact, post-Brexit era, where the likelihood of a second independence referendum and a desire to forge a deal to remain in the European Union loom on the horizon for today’s Scotland. Gillian Edgars wants to return to a pre-Union era, before the 1746 Act of Proscription that forced the remaining Clans to surrender their swords, their tartans or their kilts along with their sovereign power. 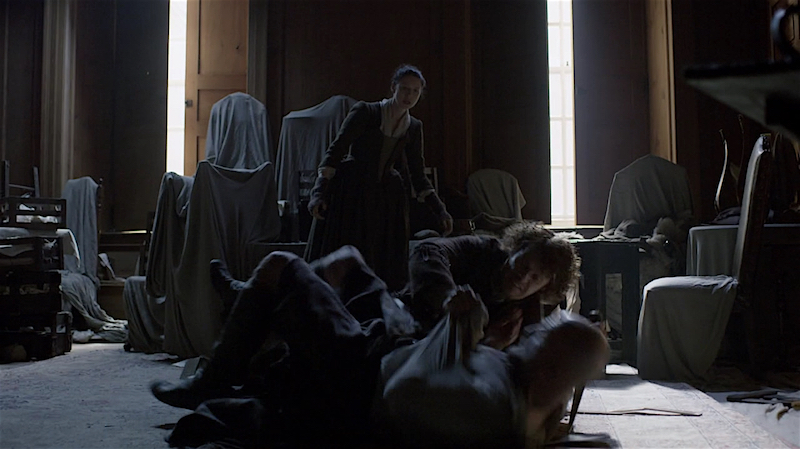 Unearthing the past is a moving and disruptive experience for our characters. We hardly know Brianna, but by the end of the episode we’re convinced she truly is the daughter of “some six-foot-three redheaded guy in a kilt from the 18th-century.” Skelton’s confident performance establishes a character who’ll be a focus of the next season. Initially, Brianna’s relationship with Claire founders when she and Roger exhume the skeletons in the Randall closet and the truth about the ‘incident’ of 1948, when Claire returned from 18th-century Culloden, having gone missing for three years in the present. Roger, alert to the temporal vibrations caused by this upset, attempts to persuade Brianna to listen: “Look, you told me that you could never get close to your mother, that she lived in another world. Well, maybe she’s trying to show you that world.” 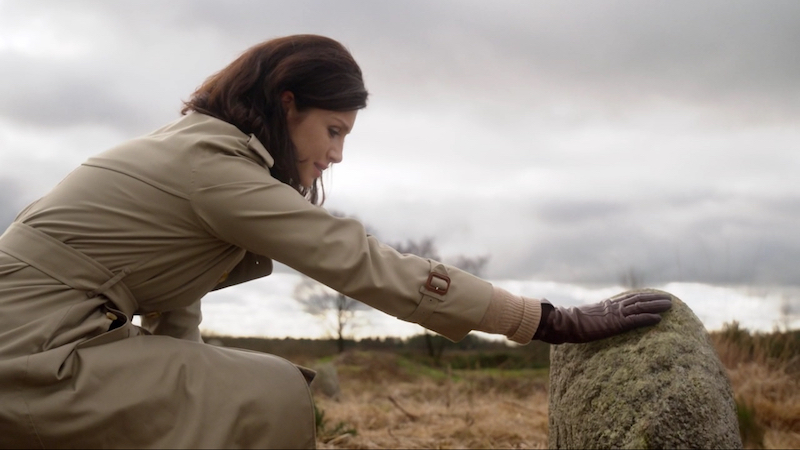 It’s all a fairy story to Brianna and this clearly upsets Claire, who’s spent her return visit to Inverness roaming the places of the past and listening to the voices of the dead. The ruins of Lallybroch and the windswept field of Culloden reveal vivid memories and offer her the final goodbye to her true love Jamie Fraser (Sam Heughan), a farewell she has desired over the twenty years since she left for America during her compromised marriage with Frank. The goodbye at present-day Culloden, where Claire relates to the ghost of Jamie the post-Culloden life she and Brianna have shared, is heartbreaking.

Ghosts of all kinds clamor for our attention. History’s imbued within valuable objects; curated emblems of the past held in the libraries and museums of the present. The deed to Lallybroch that Claire’s given a copy of, which she originally signed back in 1745 and entrusted to Fergus; the symbolic piece of amber with its trapped insect that was a parting keepsake to Jamie; and the former costume of Charles Stuart—the fool turned into a hero—forge the living connections to the past. 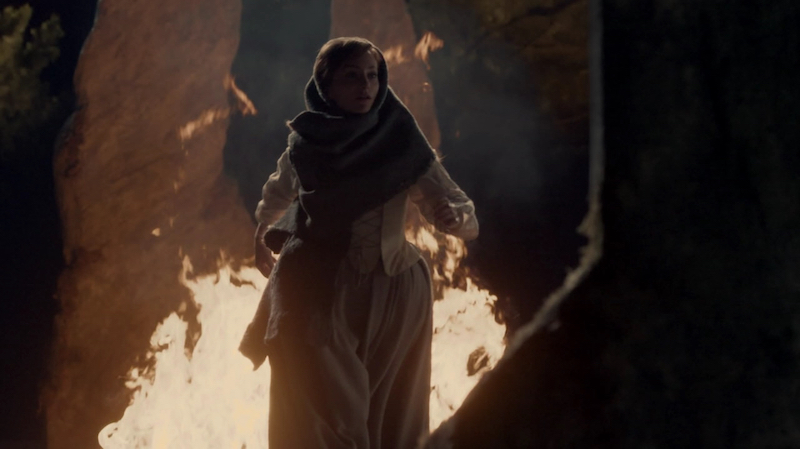 While visiting the empty, ruined landmarks of the Jacobite rebellion, the episode flashes back to precise times on the April morning of that fateful battle in 1746. We’ve assumed all along that the battle itself was the cause of the Frasers’ parting of the ways. However, a far darker incident is the catalyst. Jamie and Claire become so desperate that they plot to poison Charles Stuart (Andrew Gower) and thus hope his death, prior to Culloden, puts an end to the rebellion. This pushes viewer allegiance to the two main characters right to the edge. They’re prepared to commit another murder to add to their already impressive catalogue of criminal deeds, and they have little time to consider what exactly their actions will do to the course of history. Only when we get to unravel more of Roger Wakefield’s origins does the vexed question of keeping history on track really bother Claire but more of that later.

Claire and Jamie’s insane plotting does not go unnoticed and an eavesdropping Dougal, who has always had his own doubts about Jamie’s loyalty to the cause and Claire’s mysterious origin, quite rightly takes them to task for it. A fight breaks out and once again the viewer’s own loyalty to these characters is pushed to the limit. It’s a fight to the death this time and, with Jamie potentially being overpowered and killed, Claire joins in and adds her own physical strength to help Jamie plunge a dagger into Dougal’s chest. The Macbeths of Outlander have murdered again and although Dougal was a constant thorn in their sides his villainy was never quite in the same league as ‘Black Jack’ Randall. 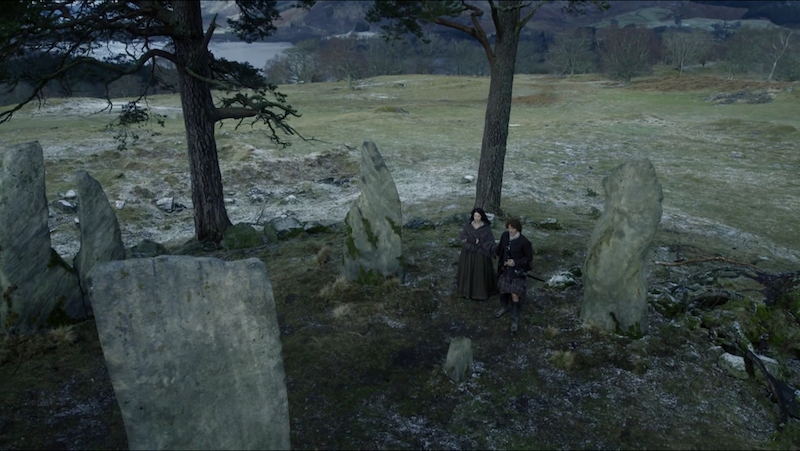 Outlander certainly raises ethical questions about murder as self-defense. The dubious morality of our two main characters, and the acts of violence they’ve become capable of offer a commentary on the contrast between a so-called civilised modern society and its barbaric past. For all the playfulness of Claire and Brianna as modern Emma Peel figures, the finale’s keen to show Claire not only as a woman who is prepared to accept her fate as the well-dressed wife of Frank Randall, but also the woman who is more than willing to poison and kill in the name of her one true love, Jamie Fraser.

One aspect of this finale that worked very well is the growing relationship between Roger Wakefield and Brianna Randall. Both are, in effect, orphans of time. Roger’s the descendant of the child mentioned in Colum’s deathbed confession, the offspring of Geillis and Dougal adopted by a MacKenzie family. His own ties to the story begin to coalesce and Claire must try and protect his existence when she discovers Gillian Edgars intends to put into practice her theories about the stones at Craig na Dun and leap back into time to fulfill Geillis’s fate. She must become Dougal’s lover and die as a witch burned at the stake. If Claire tries to stop her then Roger will also probably cease to exist. Again, it is all about what you are prepared to sacrifice for your beliefs, to fulfill your own destiny. Gillian is prepared to burn her husband’s body to do so and Claire, likewise, has murdered in a vain attempt to alter fate. 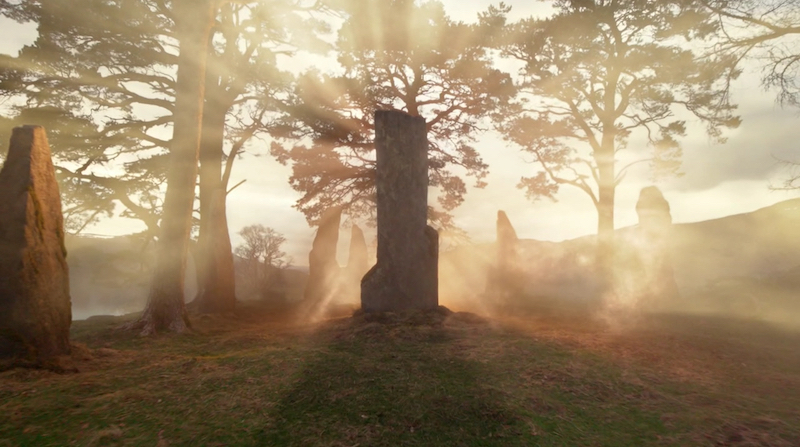 In parallel, we witness the farewell between Jamie and Claire at Craig na Dun. Parting company with Fergus (Romann Berrux) and Murtagh (Duncan Lacroix) after the murder of Dougal, Jamie will certainly have a price on his head that the MacKenzie clan will wish to cash in and he’ll also be on the run from the English in the aftermath of Culloden. His mission is to get Claire to safety by sending her through the stones. It is also to preserve the life of the unborn Brianna, his keen observation of Claire’s monthly cycle having alerted him to her pregnancy. Rather poignantly, he dances her to the end of their love and through the stones. As viewers, we knew this scene was coming for a long time but the wait doesn’t make it any less powerful.

The finale rushes to its end, its 90-minute runtime astutely crammed with incident, but also providing breathing space for emotional resonance. Roger persuades Brianna to join Claire at Craig na Dun to see if Gillian’s theories are correct. Either that or “we’ll all get to watch her slam her head into a five-ton slab of granite”. Witnessing Gillian’s transportation through the stones, Brianna is finally convinced that Claire isn’t mad and her story is true. Roger, the devoted historian, also has news of Jamie’s fate. He is not listed among the dead and there is every possibility he survived the aftermath of Culloden. As the camera hurtles toward the standing stones, Claire announces “If that’s true, then… I have to go back.” Next stop: 1765 and Jamaica.