“AKA God Help the Hobo”

It seems like our eponymous heroine has learnt the advantage of speaking out and having a team behind her in “AKA God Help the Hobo”. There’s less hide-and-seek when it comes to dealing with her allies, which, in addition to removing a lot of unnecessary and repetitive exposition that’s bound to happen, also ends up moving the plot forward.

This occurs from the first scene as Jessica (Krysten Ritter) participates in her court-ordered anger management classes. She manages to speak out the experiences that drive her, which is a marked improvement from her previous behaviour in season one — when she never entirely took part in Malcolm’s (Eka Darville) survivor group meetings.

She now knows who to go for help. When she realises that the mystery woman wore a wig, she immediately calls Trish (Rachael Taylor) and asks for help identifying superior wig companies, since Patsy was clearly not a natural redhead. That brings them to a shop owner who tells them the mystery woman’s a customer who lost all her hair and is bald, possibly due to illness. Since the easiest way to identify people with illness is to check hospital records, Trish pulls out her trump card and corners her abuser, Max (James McCaffrey), with a violent assist from Jessica. 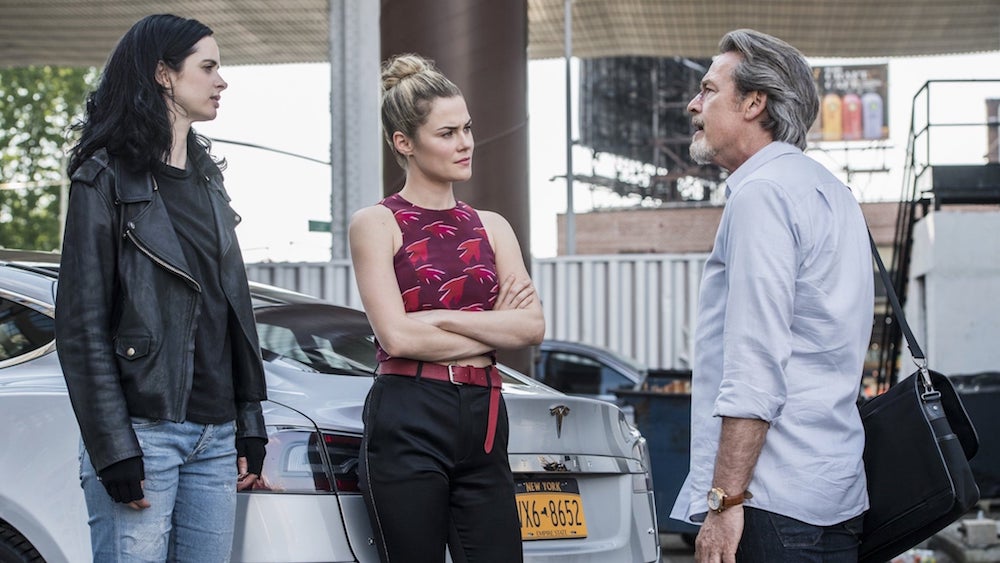 Max gets them files that show that IGH only paid hospital bills for three people: Jessica, the dearly departed Whizzer, and a homeless woman called Inez Green (Leah Gibson), so they seek the latter out at the neighbourhood where she roams.

As this happens, Malcolm’s actively getting on the show’s version of Tinder, and has a standout moment — as a result, maybe, of getting laid — where he asserts his importance as an ally to Jessica. Jessica agrees to teach him and trust him (surprise, surprise!), so he feels confident in his decision to have rejected rival PI Pryce (Terry Chen), who tried to recruit Malcolm. 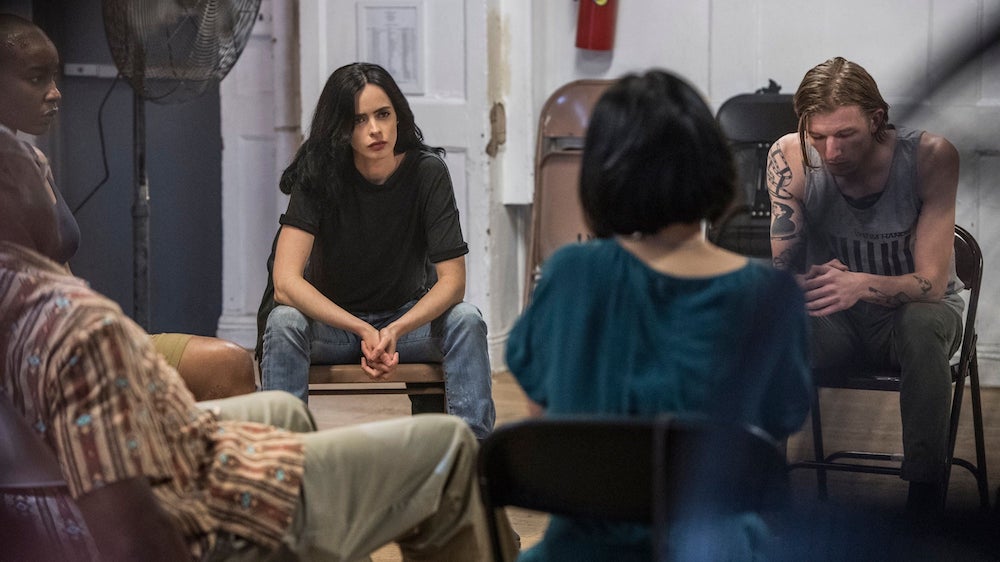 But let’s get back to Inez, who doesn’t end up being our mystery woman. She was actually a former nurse hurt by the mystery woman years ago (while a fellow nurse named Luanne was murdered), so Jessica and Trish try to keep her safe from the mystery woman and IGH. However, when they get back to the apartment, Jessica’s arrested. It seems that Pryce’s henchman, who was sent to steal all of Jessica’s files, has been murdered by the mystery woman, and since the police only know one woman who has the power to tear limbs apart, Jessica becomes the scapegoat.

Other things that happen this episode include Jessica and superintendent Oscar (J.R. Ramirez) getting close, thanks to her saving his son Vido (Kevin Chacon, in a scene-stealing role) from falling off her balcony. That also means her eviction notice is torn up, so that’s one plot point closed. Jeri (Carrie-Anne Moss), on the other hand, is trying to get as much dirt on her partners as possible so she can push them out, while looking for euthanasia options so she can go out on her terms. Control issues, as usual. 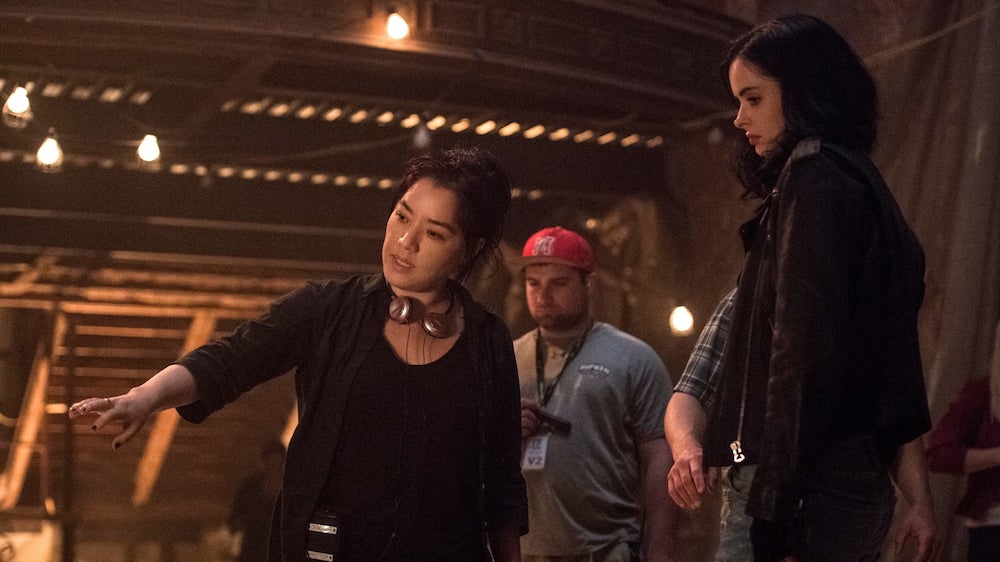 The subplot about Jeri is distracting, but this episode still stands out, thanks to the deft handling of multiple similarities between the mystery woman and Jessica (anger issues, secretive, little family or friends). “AKA God Help the Hobo” focuses on how Jessica’s trying to change her behaviour, before she ends up becoming her own evil twin. Of course, that doesn’t mean her life becomes a bed of roses, as she does end up getting arrested.

Instead of going old-school superhero and pulling an alternate universe episode, writer Jack Kenny and director Deborah Chow were smart enough to realise that Jessica Jones works best when firmly rooted in reality. There isn’t even a dream sequence. 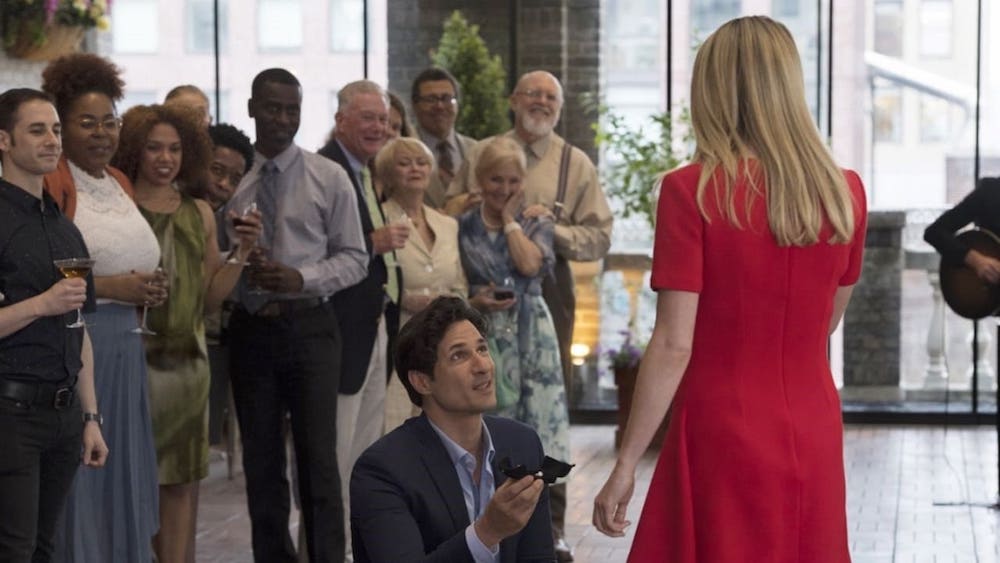 Cue the gasps: Jessica Jones is being nice. Continuing on the same trajectory from “AKA God Help the Hobo”, “AKA The Octopus” starts off with a scene you don’t usually see: Jessica telling the police everything. After having a mini-meltdown in her cell after her arrest, Jessica punches a wall — using the method she learnt from anger therapy, i.e. “an external action to soothe internal strife”. Jeri then comes in and tells her that, due to her being on probation for that small act of beating Pryce Cheng (Terry Chen) to a pulp, she needs to tell the police everything or she’ll stay in jail for a long time.

Jessica: So I’m on my own?
Jeri: Only if you keep alienating everyone around you.

And boy, does Jessica listen in this episode. She calls Malcolm, asks for his help in getting Inez to spill the beans, and then proceeds to tell the police the entire story, excluding the part about Inez. The police let her go, because after someone like Kilgrave has wrecked havoc on a city, what’s another super-powered woman killer to them? Of course, Pryce is waiting outside the precinct, so he gets into Jessica’s face and accuses her of being a killer. Her reply? “Not today, I’m not.”

Many more standout lines appear in “AKA The Octopus”; Jamie King, this week’s scribe, does an exceptional job filling in the few words that help indicate character growth. Eka Darville also manages to make the most of his scenes; every time Malcolm appears on screen, reorganising the office or handling Inez’s reticence, we feel him becoming a bigger part of the team. 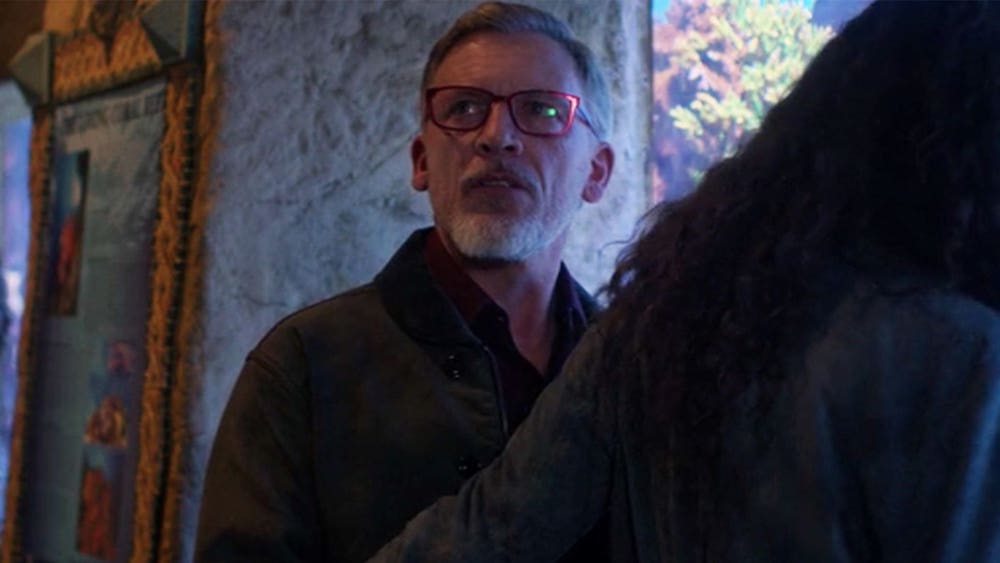 While Malcolm hands off Inez to Jeri for safekeeping, literally, Jessica goes to a mental hospital to talk to the previous janitor at IGH, who was incarcerated for killing the other IGH nurse, Luanne. In order to get a forged pass to enter the high-security wing, though, Jessica has to lean on her budding friendship (and relationship?) with Oscar the superintendent (J.R. Ramirez).

David the incarcerated janitor (Daniel Everidge) ends up telling Jessica a story about how he brought Luanne home, and then hugged her and saw her in his bathtub, so Jessica calls him out on it, but he refuses to budge on the story, and gets angry instead. This sounds suspiciously like a classic Killgrave victim, I have to say… but, either way, David tells Jessica about how he used to watch Octopuses at the aquarium with his “good friend” Dr. Karl, so Jessica takes that lead and leaves.

While Jessica spends time at the aquarium waiting for Dr. Karl to show, we’re given some insight into the mystery woman’s life. We see her burning all the clothes after killing Pryce’s henchman, then having some alone time in a large, quiet home. She plays piano — and sings! — but is interrupted by her neighbour, who has a crying baby and needs some space as the baby stopped crying when the piano music started. That doesn’t last long, of course, as babies always cry, so the mystery woman manages to control until the neighbour leaves before beating her piano to pieces. Cue another bonfire where she has to burn the pieces of her piano. Talk about anger issues.

At the same time, Trish is recovering from the effects of the stimulant, rejecting Griffin’s proposal (“I don’t want to be with him, I want to be him”), and basically becoming a mess.

In the final scene, Jessica sees a man who looks like Dr. Karl (because he brings up a long-lost memory in her mind) embrace a woman at the aquarium. That woman, whom Dr. Karl kisses, is the mystery woman, creating a whole new set of questions. Firstly, though, Jessica needs to save some people who might drown thanks to the mystery woman bashing in one of the aquarium walls…