One of Outlander’s strengths is showing the emotional impact of life-changing events on its characters. And by show, I mean show rather than tell. This was very true of the male rape scene at the end of the first season; a very graphic depiction of ‘Black Jack’ Randall’s torture of Jamie Fraser (Sam Heughan) that was certainly more detailed than the original novel. “Wentworth Prison” and “To Ransom a Man’s Soul” were extremely difficult but very powerful viewing experiences, and this week’s episode “Faith” is equally uncomfortable. But I’ll get back to that in a moment.

Toni Graphia’s script opens with a flash-forward to Boston 1954 that’s absent from Diana Gabaldon’s book Dragonfly in Amber as far as I’m aware. We see Claire (Caitriona Balfe) established in her 20th-century life with her daughter. The purpose of the scene only makes sense when the rest of the episode plays out. After the tragic loss of her child, the intimate little moment of Claire with her little girl adds a resonance, a sense of the hope flowering from the tragic end of the Frasers’ life in Paris as well as a sadness at a life that could have been long before Claire returned to Frank in 1945.

Without giving too much away, the scene with her daughter is not wish fulfilment because, if you remember, Claire was pregnant again when she arrived back in 1945. It’s Graphia’s conduit from the future into the central story of “Faith”, of Claire surviving the loss of a child in the past and entering into the process of healing through dissociation. The image of the blue heron visualises this and director Metin Hüseyin uses it as an actualisation of the healing powers that Master Raymond (Dominique Pinon) sees in Claire. The heron is Claire’s self-image; a spirit animal depicting her transition through difficult periods in her life, the need for stability in her liminal existence. 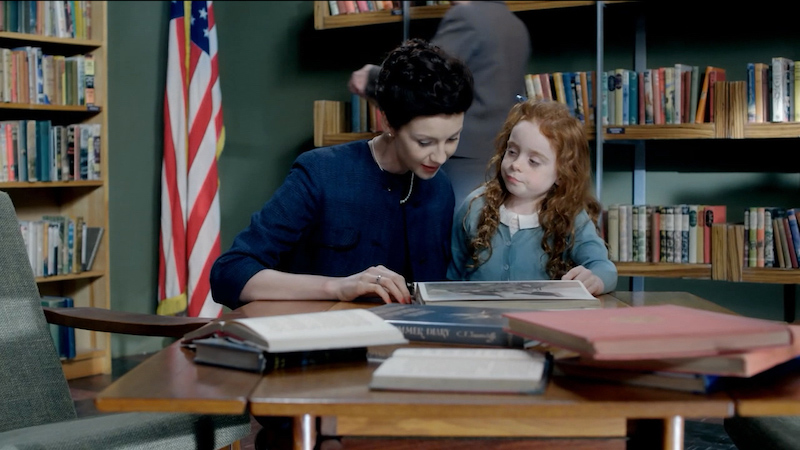 He matches this with the shattering of the statue of the Madonna, Claire’s intercessor, as a somewhat more heavy-handed allusion to the episode’s concern with the effects of losing that faith, be that embodied in the death of a child, the loss of stability in herself, others and, in the great scheme of things, the religious powers that may or may not govern her fate.

This episode belongs entirely to Caitriona Balfe. Despite meandering at times with some disjointed tones and visually overstating the aftermath of a number of traumatic events, Balfe manages to corral all the disparate elements and prevents them from flying out of control through her performance alone. She digs deep emotionally as an actor to realise Claire’s shock and the post-traumatic stress of her miscarriage. It’s as raw a performance as Heughan’s was back in season 1’s conclusion and it’s very moving in the way is traverses the sense of disbelief, numbness and then acceptance of her baby’s death.

I do have some minor quibbles; again about the use of subtitles and French as once more we have characters starting their dialogue in English and then finishing in French, or vice versa. The case in point being Mother Hildegarde’s (Frances de la Tour) tragic admission to Claire that her baby is dead. I’m sure Hildegarde’s use of English and French does actually extend to knowing how to impart the news in both languages. Please can we have complete sentences in French or English, as all the jumping in and out of the languages within one line of dialogue is irritating.

Master Raymond, who is in all intents and purposes Claire’s guardian angel borne on blue wings, heals her fever through his uncanny expertise. Again, the use of colour is important and Metin Hüseyin bathes this scene in the hospital in deep blue lighting as he drains the fever. As Raymond explains, “everyone has a colour about them, all around them like a cloud. Yours is blue, like the Virgin’s cloak, like my own.” It is he who also entreats her to have faith. 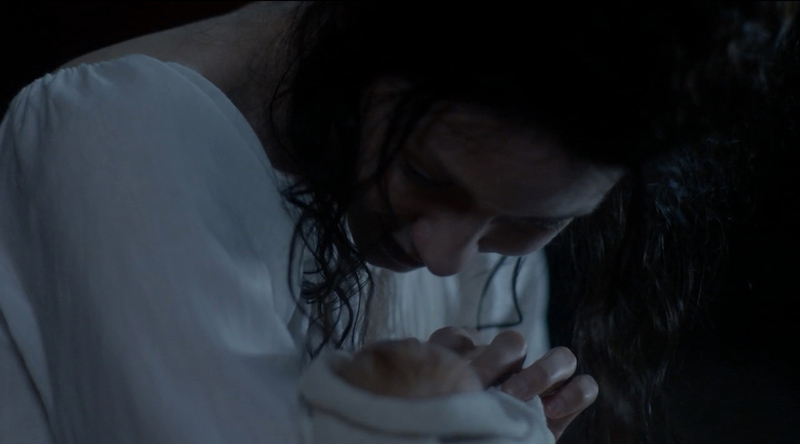 One of the most effective scenes is Claire’s return home. It’s a strikingly silent scene, beautifully scored by Bear McCreary. There’s no dialogue, or sound effects as her carriage arrives, just music and performance. She’s not only in deep shock from the death of her daughter Faith, but she’s learned that Jamie is in prison and ‘Black Jack’ Randall has been seriously wounded but survives in England. She is also, at this stage, extremely angry about Jamie’s betrayal of their promise to spare Randall from a duel to the death for a year. “Revenge mattered more to him than me or his child,” she believes, not entirely aware of the facts even as she arrives home with Fergus (Romann Berrux) at her side.

It’s at this point you have to consider if Outlander has overstepped a boundary. I think most of us knew exactly what happened to Fergus when he was caught by Randall in his room at Maison Elise. We know what Randall’s capable of, we’ve seen it and “Best Laid Schemes…” gave us enough information to draw the inevitable conclusion. I didn’t think Toni Graphia would go as far as actually showing us Randall’s rape of Fergus, and I was very surprised it was depicted.

Graphia has defended its inclusion as a way of rightly justifying Jamie’s anger and decision to fight Randall, but it’s disturbing to see the young boy’s assault in flashback and I’m still uncertain that it should have been shown so soon after showing the rape of Mary Hawkins. The depiction of rape and its trivialisation is an issue that’s often been raised about Gabaldon’s Outlander books, and it was always going to be problematic translating this to the screen. However, the consequences are already evident in Fergus’ nightmares and it seemed rather unnecessary to show us the cause. No doubt the series will, as it did with Jamie, return to the psychological effects of this later in the season. 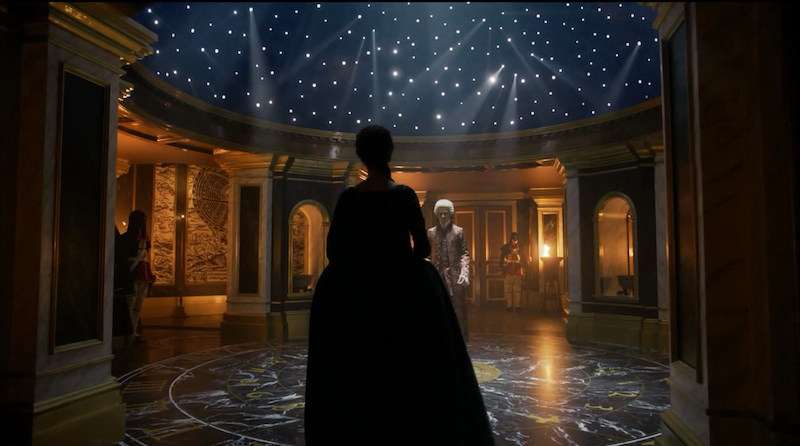 Yet, when Claire secures an audience with the King (Lionel Lingelser) to try and free Jamie from the Bastille, we’re presented with sex as an acceptable payment for his services. This was probably the currency of the Ancien Régime, received by a King known for his attachment to mistresses such as Madame du Pompadour and Madame du Barry. However, after the trauma of Fergus’s experience, it reduces the giving and receiving of bodies to the trivial and absurd as Claire obligingly hoists up her skirts and casually tells us in voice-over “I closed my eyes and thought of England.” Granted, King Louis XV’s idea of fornication is dispassionately mechanical but it’s a striking contrast in tone to the sexual assault on Fergus.

It’s also an odd tone to adopt after an extremely tense 20-minute scene where Louis tests Claire’s reputation as ‘La Dame Blanche’ in a visually striking star chamber inquisition against Master Raymond and Comte St. Germain (Stanley Weber), both arrested for sorcery. Graphia pulls together a number of threads here, from the effect of bitter cascara on its victim to the pendant that indicates the presence of poison, as Claire is forced to put Raymond and St. Germain through a trail by ordeal and admits herself to be a practitioner of white magic. It puts an end to St. Germain as Raymond surreptitiously poisons the cascara before Claire’s nemesis takes a drink. It’s a great scene, beautifully lit and shot, and chock full of brinkmanship between Claire and the accused men. She uses the situation to her advantage, revealing St. Germain’s deceit and attempt to poison her but tries to save both of them.

With Master Raymond spared and banished from France and her debt to Louis XV paid in full, Claire returns home. Jamie is released and comes back to a wife still grieving the loss of her child. Unfortunately, Sam Heughan is lumbered with a terrible false beard and all of the wretched despair of the final scenes is undercut by the close ups of him trying to emote through this ginger monstrosity. It’s very difficult to avoid as Claire flashes back to the traumatic events at L’Hôpital des Anges and bitterly admits her hatred for him after having broken his promises to her. 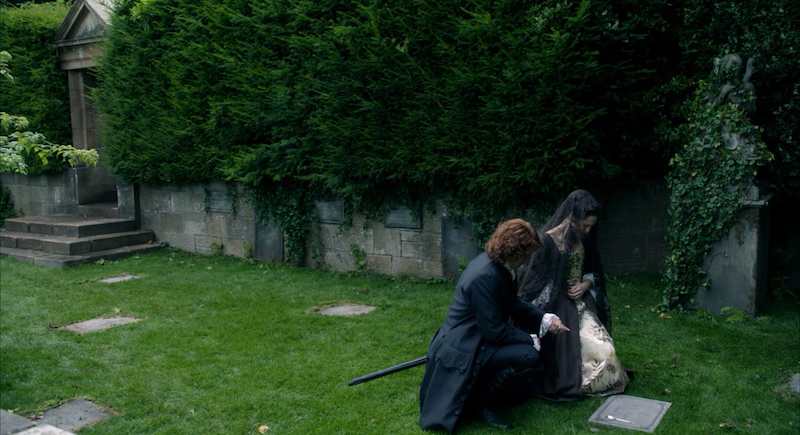 Fortunately, the flashback includes a very tender scene where Claire’s visited by Louise de Rohan, perhaps her only real friend in Paris, and who manages to persuade her to relinquish Faith’s body and give in to her grief. It’s a powerful scene and dovetails with the way Claire offered Louise advice and support when she was unsure of what she should do about her own pregnancy in “La Dame Blanche”. Balfe’s performance as Claire describes the body to Jamie is spiky and transmits the character’s icy anger and grief. Equally, Claire Sermonne’s line of “It is time, my dear” is devastatingly clear in its purpose as she asks if she can hold Faith’s body.

For those of us concerned about Claire’s transformation into a selfish schemer over the last few weeks, we also get an admission from her to Jamie that “it is me who has asked the impossible of you” and “it was me who put Frank before our family”. Jamie takes it rather well, particularly when she owns up about sleeping with the King to gain his freedom, and rather generously compares her sacrifice to the horrific ordeal he suffered at the hands of Randall. This self-realisation for the characters reiterates the strengths of Outlander and how it puts its protagonists through a harsh emotional journey but I’m not entirely convinced by the way the two main characters now have to try to out do each other in the self-sacrifice stakes at the end of each episode.

However, similar to when Mary Hawkins described her own survivor’s guilt, both understand they are no longer the same people and the only way forward is to bear the pain and return to Scotland. “The only way we can live with it is to carry it, together,” Jamie agrees and, in a moment of foreshadowing, suggests that in time they may be graced with another child. They leave Faith buried in Paris with the protection of a St Andrew christening spoon at her graveside, their mission to derail the Jacobite rebellion coming to a painful conclusion and at much personal cost.