My biggest gripe about Preacher has been how scattershot everything’s been, but “He Gone” felt more harmonious and structured. The flashbacks didn’t seem as random, they enlightened the present day’s concerns—mainly the mindset of anti-hero Jesse (Dominic Cooper). Our preacher’s a man whose father was violently executed in front of him as a boy, but who promise him he’d be a good man because “there’s way too many of the bad”. Words it seems Jesse failed to keep, as we already know he partnered with Tulip (Ruth Negga) for a life of crime until something made him return to Annville and continue his father’s work in Church.

It’s taken awhile, but I think Preacher’s writers are starting to get under the skin of Reverend Jesse Custer and it’s fun seeing what makes him tick. This is a guy clearly burdened by childhood guilt and trauma, and it was interesting seeing some of that come back to haunt him. In particular, young Jesse (Dominic Ruggieri) prayed his father (Nathan Darrow) would be sent to Hell after the social services took troublemaker Tulip away, and regretted it ever since because his dad was fatefully shot dead soon after. It was the kind of tragic coincidence you’d imagine a kid would obsess about all his life, and taught Jesse the ‘be careful what you wish for’ lesson. But that only makes his accidental banishment of Eugene, to a literal Hell, all the more harrowing for him. 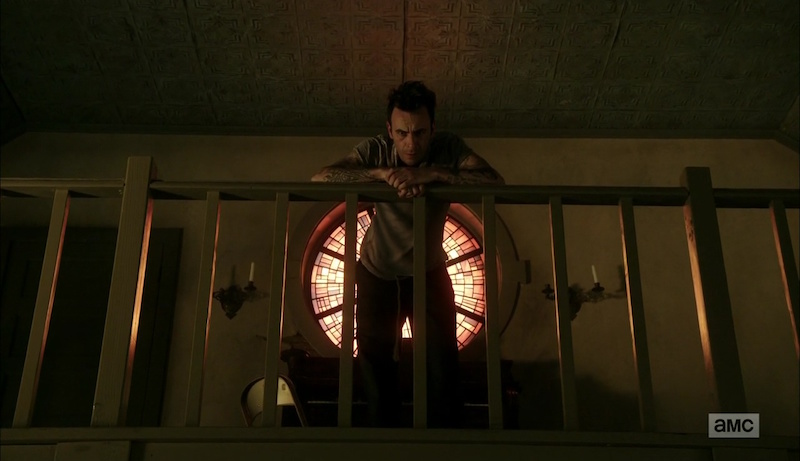 The disappearance of Eugene loomed over “He Gone”. The boy’s vanishing provided Jesse with a deep torment he tried to keep a lid on—mainly by rationalising that Eugene wasn’t as innocent as Cassidy (Joe Gilgun) believes, as it was confirmed that ‘Arseface’ was facially disfigured after a botched suicide attempt after trying to murder Tracy, who spurned his advances and now rests in a coma. Maybe God wanted Eugene to get a ticket to hell, and Jesse is just the instrument of this belated justice?

Eugene’s backstory is actually darker than the comic book’s own, which is very much appreciated. It’s good to know Preacher isn’t going to dilute everything from the heretical source material. I just don’t understand why Eugene isn’t in jail for this crime. Maybe his father, the Sheriff (W. Earl Brown), had some sway with a judge? Or was the truth twisted just enough to spare his son prison? 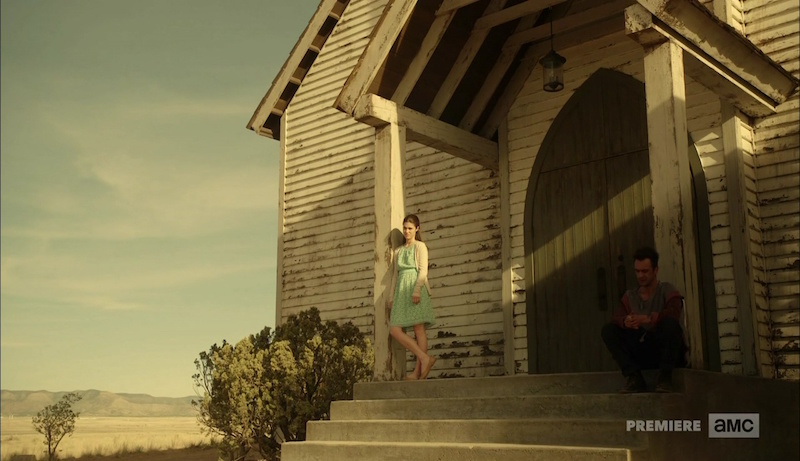 It was also an episode of confrontation and revelation. Cassidy stuck by Jesse to begin with, valuing their friendship and what that means for him, but eventually had to make Jesse recognise the magnitude of what he’s done to Eugene. This led to an overdue moment when Cassidy revealed he’s not human, by walking into direct sunlight and putting life in Jesse’s hands with a fire extinguisher, although I don’t think this scene did enough to sell exactly why Cassidy chose to reveal his true nature. The show has been a bit weak here, because why hasn’t Jessie previously questioned why Cassidy keeps wearing ridiculous ponchos and big hats outside?

It remains to be seen what state Cassidy’s in now after self-immolation, but my guess is ‘black and crispy’ and in desperate need of regenerative blood. He certainly won’t be much use when Odin Quincannon (Jackie Earle Haley) rolls up to the church with his bulldozer and team of workmen, unhappy Jesse’s reneged on their agreement to sell him the Custer family’s land if he failed to become a Christian.

Speaking of which, did Odin ‘snap out’ of the delusion Jesse placed on him, meaning the preacher’s ability to impose his will has a time limit? I took it to mean Odin’s still a god-fearing man because Jesse willed that to be true, but that doesn’t mean he’s incapable of lying about his faith in order to get his hands on the Custer land. I guess either is possible, though, so we’ll have to see. 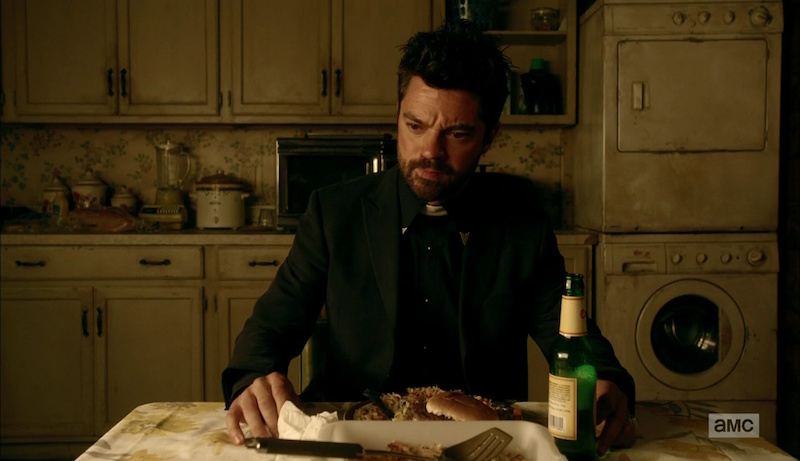 More friction came between Tulip and Jesse during the dinner table scene, with Tulip angry her ex-boyfriend has become so uncommunicative (after what secretly happened to Eugene). And the aforementioned flashbacks fleshed out their childhood friendship as two kids who got into mischief together, coming from families of opposing status. The O’Hares are bad news, it seems, but Jesse’s always been drawn to her rebellious nature. Indeed, he ran to it in later life and only recently has been drawn back to the ‘family business’. I wonder if Tulip’s family are still around, or if the O’Hares left long ago.

“He Gone” had some problems convincing me of a few things (like why Jesse wouldn’t immediately ask the two angels how to get Eugene back), and wasn’t on par with last week’s high point, but I’m glad Preacher is beginning to feel like a proper television show now. A show that has a story with subplots that support and deepen our understanding of its characters and their relationships.

SHOW ME A HERO – Part Four