Satan’s Blade is indicative of the archetypal quality and budgets of 1980s ‘video nasties’. It’s an inexpensive slasher film mimicking the tried and tested equation that blood, horror, and naked flesh equals profit. It serves more as a warning that when cheap horror flooded the home video market, the results varied wildly. For every quality release, such as Sam Raimi’s The Evil Dead, there were hundreds more like Satan’s Blade; uninspiring, incoherent, poorly acted wannabes.

Arrow Films’ new release brings Satan’s Blade out from VHS obscurity and into the HD era, but in hindsight fuzzy video where it should’ve stayed. That said, the disc’s extras give an intriguing insight into its inception and production. Director L. Scott Castillo Jr is more entrepreneur than auteur, and throughout the bonus material he unashamedly stresses his focus was on business, not art. Seeing a money-making opportunity and with no prior experience, he embarked on making his first movie based on a “bunch of strange ideas floating around” in his head.

The plot concerns a snowy holiday destination in California, said to be cursed by the spirit of a native mountain dweller who, according to legend, was given a blade from the Devil to seek retribution for the reappropriation of his land. The film begins as two denim-clad robbers target a bank, executing witnesses and escaping with the loot to a cabin safe house in the cursed holiday park. However, the cabin’s safety proves unfounded when one robber kills the other for the money, only to then be murdered by a shadowy assailant with a blade.

The director conceals the perpetrators identities, restricting camera angles to their feet and hands until they reach the safehouse, whereupon there’s a twist revelation regarding who the criminals are. It’s a bold opening, with inventiveness and a high body count. Critically, it epitomises the films vital flaws: promising more than the rest of the film can hope to deliver, as it slips back into stale horror grooves. It’s also indicative of how the standout moments actually have no impact on the narrative. The opening, one of the film’s biggest strengths, feels like it was added as an afterthought. 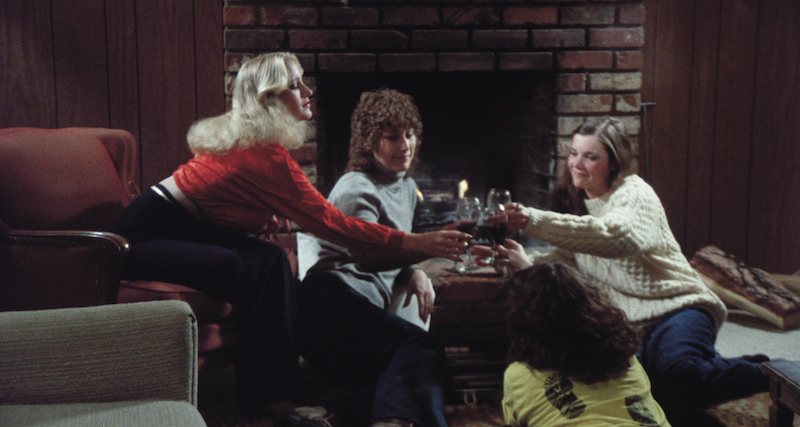 Two groups of friends arrive at the same cabin park, to news the police have been investigating the horrific murder that took place in the only vacant cabin. Stupidly undeterred by sleeping in a fresh crime scene, and with warnings of the legend ringing in their ears, they agree to hire the same cabin and stay the night. One by one they’re murdered by the mysterious killer, of course. Is it a madman on a killing spree? Or are the legends of the revenge driven mountain man actually true? If, by the time of the reveal you still care, don’t expect too much of a surprise.

The frustrating thing about Satan’s Blade is that good moments are used to under-deliver. For example, once the group are settled in the murder cabin, there’s a creepy scene in which the killer enters and begins to kill them all as they fight for their lives. It’s genuinely disturbing and an important moment, as we get to see the deformed and creepy face of the killer. All of this, however, proves fruitless once it’s revealed to be a dream.

Watching low budget B-movies of this type inherently requires some forgiveness, lowered expectations, and an ability to find fun in the clichés and bad acting. You might think the drunken hijinks of some characters in Satan’s Blade might lend itself to a self-knowing comedic tone, but the film approaches things with such po-faced seriousness it’s difficult to enjoy even ironically. The film just doesn’t have a pulse, like many of its screen victims.

There’s no consistency or reasoning in any of the deaths. The supposed legend of the mountain native is never fully explained. Opportunities to explore an underlying message about comparisons to the historical Native American land grab aren’t taken. I’m not expecting a deep moral exploration from a minor slasher film, but it doesn’t convey any meaning or message at all.

It’s important to remember this was the director;s first feature-film and, to his credit, the continuity between scenes professional. Satan’s Blade is quite utilitarian in its visual approach, focussing on function rather than aesthetic. The exception being establishing shots of the beautiful snow-covered landscapes in which the cabins lie. It’s easy to note an influence from John Carpenter, not least in the synth-heavy soundtrack, although the score for Satan’s Blade gets repetitive very quickly. 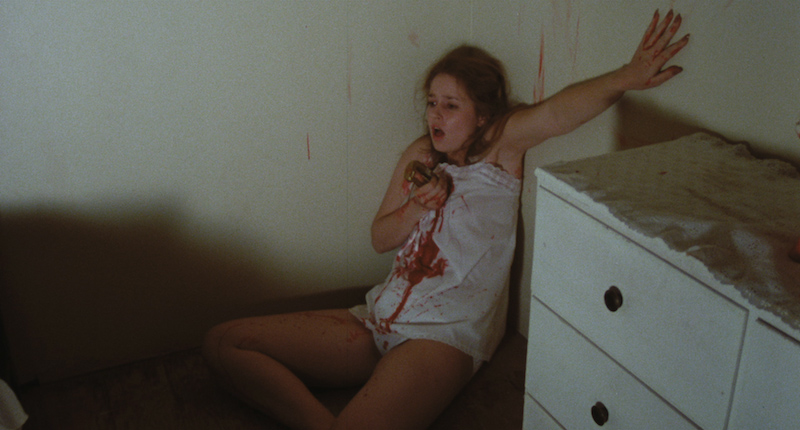 In conclusion, echoes of Friday the 13th and Halloween mean Satan’s Blade’s flounders in direct comparison with those much better works. However, there is a good film in here, somewhere, as the concept’s good but left unexplored.

So, why seek out Satan’s Blade at all then? Arrow have done exceptionally well to include extra features for a film that’s nigh impossible to find even on VHS these days, and it’s within this bonus material that you read between the lines and find a very interesting case study in the business of low-budget filmmaking in the ’80s.

The two interviews with the director (even though the lighting in one is woeful) give a real insight into the VHS horror industry, as well as how this film came to be. It also includes great trivia, like how first shot before the title card (where the so-called Satan’s blade is thrown at a tree and starts to glow red) was allegedly completed by Industrial Light and Magic and cost a whopping $3,000. Satan’s Blade could surely fight for the title of the worst film ILM ever worked on. It also reveals that the excellent artwork was also used for another film called Satan’s Blood.

The disc also includes a commentary from members of the podcast the Hysteria Continues, which repeats a fair bit of the trivia in the documentary and is better seen as a chat about the film rather than an in-depth look behind the scenes.

There’s definitely something here in the extras for the low-budget horror aficionado, or film student looking for an example of video nasty economics, but Arrow otherwise has loads of much better titles to purchase. For most of us, the only memory you’ll have of this film will be one of condolence for wasting your money.