As expected “The Hail Mary”, by its very title, returns us to the undetermined fate of Mary Hawkins (Rosie Day). Last seen being used as a pawn in the Duke of Sandringham’s machinations, it’s young Mary’s marriage to ‘Black Jack’ Randall that offers one fait accompli amongst many in this episode. There are other clan-related matters to resolve, too, and “The Hail Mary” structures Mary’s story around a somewhat bitter end for Colum MacKenzie’s (Gary Lewis) stormy relationship with brother Dougal (Graham McTavish), and the bequeathing of clan power to Jamie Fraser (Sam Heughan).

The dying Colum wearily descends upon a very tired, demoralised and hungry Jacobite army just outside Inverness, three days before the clans march into the history books at Culloden. Cold, desperate and resigned to fate, Claire (Caitriona Balfe) sums up the previous eleven weeks of Outlander: “All that work. All that plotting. How the bloody hell did we end up here?” Clearly, time’s arrow has not wavered despite Jamie and Claire’s attempts to throw it off course. Despite hoping, Colum hasn’t changed his mind and joined the rebellion. He’s there to set a few matters straight before he leaves the stage. He also informs Claire that Geillis Duncan’s child survives after her mother’s sacrifice during the trial for witchcraft in last year’s “The Devil’s Mark.” Mark me, this information will become significant. 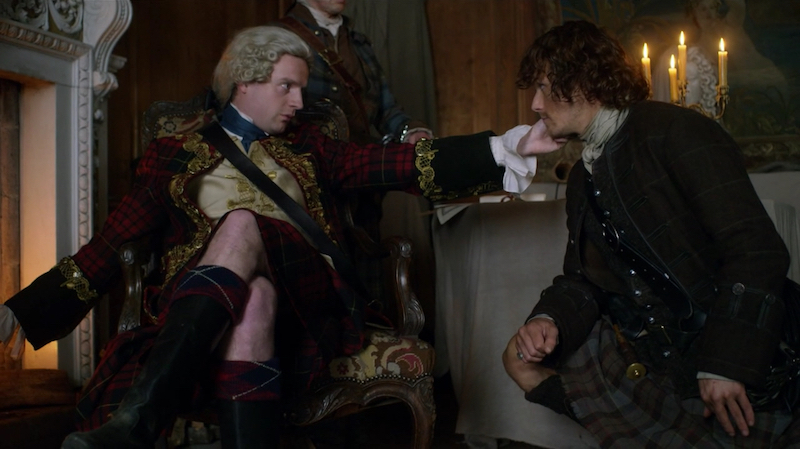 When Claire again encounters Mary in Inverness she’s already tasked to source an appropriately fast-acting poison to bring to a close Colum’s dying days. At the local apothecary, their fates intertwine again and for very valid reasons: Mary is nursing Alex Randall (Laurence Dobiesz), in the throes of tuberculosis and close to death, and is now pregnant with his child. She’s suitably angry with Claire after Alex revealed to her that Claire stepped in to dissolve the relationship between the two. Unbeknownst to Mary, this was out of Claire’s fear that it would disrupt established history and the ancestral line of her husband Frank Randall.

This is a somber episode, permeated with death, Faustian bargains, and depressing fatalism. As Jamie attempts to once again influence Charles Stuart’s (Andrew Gower) war council, by suggesting he call off the battle at Culloden because their army’s exhausted, hungry and unprepared, Claire’s caught up in the fates and legacies of two families. Having acquired the poison for Colum, Claire is attending Alex when she is unfortunately reunited with his brother Jonathan Wolverton ‘Black Jack’ Randall (Tobias Menzies). 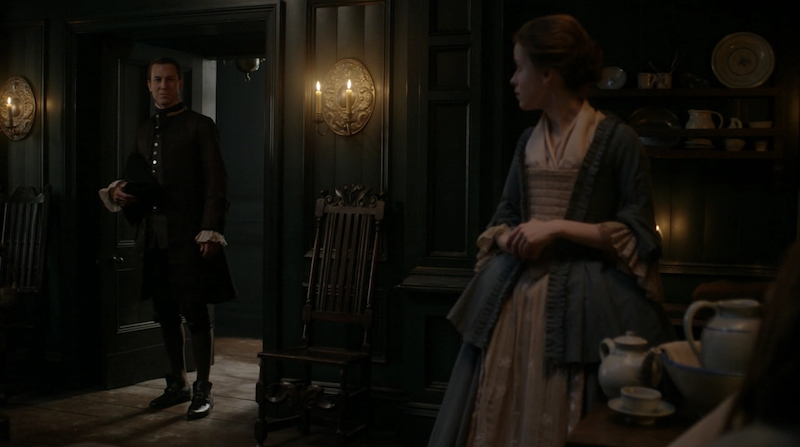 This episode cunningly wrong-foots its audience and, initially, reveals what appears to be a human side to ‘Black Jack’ Randall, which comes as a bit of a surprise, and he appears to be truly caring, respectful and sorrowful about the death of his brother. His generosity has also saved the young couple from destitution and he vows to support Mary in the event of Alex’s death.

However, when Claire confronts Randall in the local pub he reminds her that he has absolutely no regrets over his vile treatment of Jamie in Wentworth prison. Thus, his compassion is but a smokescreen to cover his reputation as evil incarnate. He “regrets none of it. The pain, the fear. I revel in it.” Keeping her anger in check, Claire agrees to look after Alex on his behalf only if he tells her the location of Cumberland’s army. He finds her determination to “barter over an innocent man’s suffering” impressively pragmatic but she reminds him that, with so much water having passed under the bridge in their encounters, “the woman I am now is not the woman I once was.” 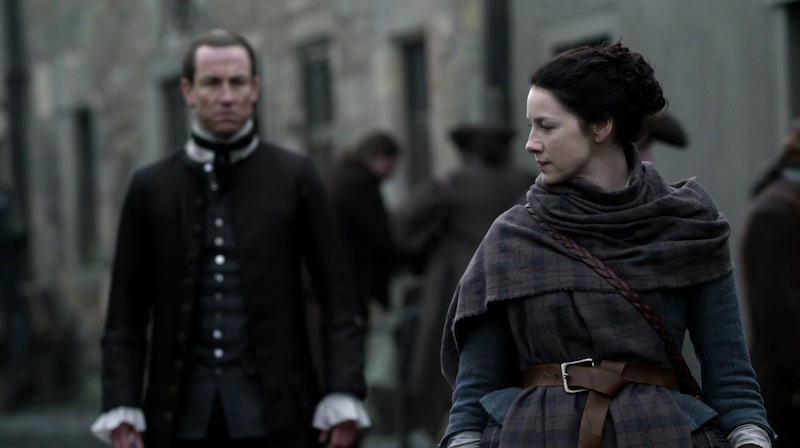 Alex also points out the dual nature of his dear brother from his deathbed, clearly separating the soulful ‘Johnny’ from ‘Black Jack’ the fiend we know, and whose nature will, as we see, never change. Alex is fully aware that his brother’s the furthest from being a saint you could possibly get but he appeals to the better part of his brother’s nature in order to persuade him to marry Mary. It’s an appeal to someone incapable of redemption and whose dual nature is merely another manipulative shade of his personality.

Claire acknowledges that Mary would be better off as ‘Black Jack’ Randall’s widow and, realising that Frank is actually Alex’s descendant, she strikes a deal with him to take Mary in marriage and thus resolve her status and the ancestry equation. After all, she reminds him, ‘Black Jack’ Randall’s fate is sealed at Culloden and in a day’s time he will be dead. And if it isn’t to be, Claire emphasises her promise to Jamie that his death at their hands is just as assured and Mary will still benefit from his name and his estate. 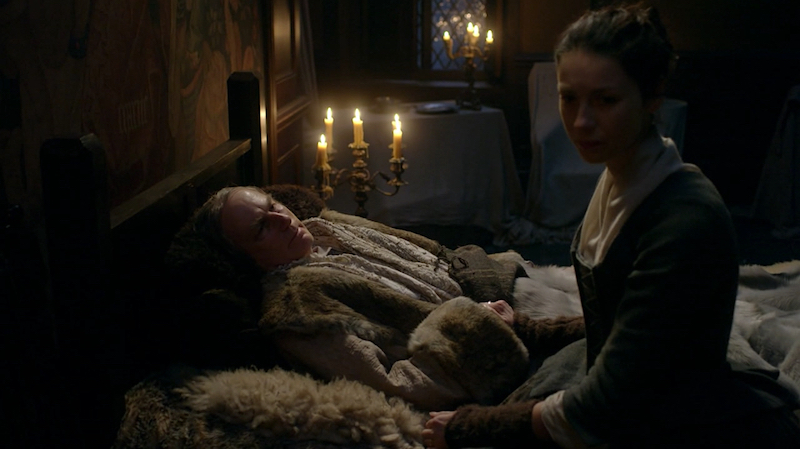 A most depressing wedding ceremony seals the deal. While the dying Alex looks on, a minister marries them before Claire and Murtagh (Duncan Lacroix), both aghast as witnesses. To their horror and true to form, rather than respectfully mourn Alex’s death, ‘Black Jack’ takes out his rage and frustration by beating his own brother’s corpse. It’s something of a departure from Gabaldon’s book and was apparently developed during the shooting of the scene as a way of reminding us how darkly transgressive a character he is and with this Tobias Menzies perfectly reinstates the ugly heart of the man.

The episode’s other deathbed scene sees Colum’s antagonism towards his brother Dougal crowned by another embarrassing snub. Much to Dougal’s fury Colum chooses his nephew Jamie to guide his son Hamish into becoming the MacKenzie clan’s leader, knowing full well that Hamish is, in fact, Dougal’s biological child. Dougal does later return to Colum’s side to voice his remorse and resentment at constantly searching for his brother’s acceptance. He tries to make some amends in a very affecting scene but it is far too late and Colum has, even in death, turned his shoulder away from his brother. 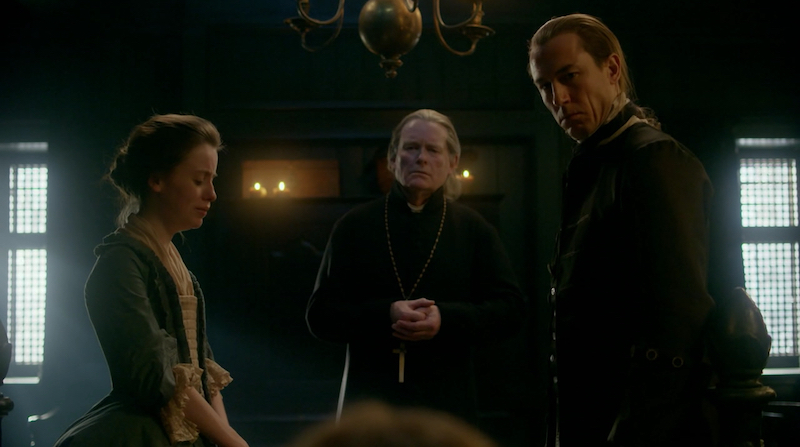 With the location of Cumberland’s army revealed and the promise the Jacobites might spoil the Duke’s birthday celebrations into the bargain, Jamie persuades Charles Stuart to join a raiding party to deal a decisive blow the night before the terrible events of Culloden. It all goes horribly wrong as, oddly enough, Charles and his men fail to join Jamie and his soldiers. They have turned back having “lost their way in the darkness.”

It simply illustrates that Charles Stuart neither has the stomach for a fight nor the strategy to lead an army into what will be whole scale butchery on the moors of Culloden. Fate always has one more card up its sleeve, inevitably pushing us towards Claire’s separation from Jamie and her return to 1948. Presumably, the forthcoming 90-minute finale will bring us full circle and back to the stones at Craigh na Dun.

SCREAM: THE TV SERIES – Season One