Certain things about Better Call Saul are fated to happen, as we know where Jimmy McGill (Bob Odenkirk) will end up in several year’s time. The fun is seeing the details of the journey, but chances to truly surprise us are difficult to execute. Jimmy’s tenure at Davis & Main was doomed from the start, of course, and last week I theorised that he may try and start a law practice with Kim Wexler (Rhea Seehorn), and “Inflatable” saw both of those things happen.

While there are still ways for the writers to bend the specifics of what happens, to keep us on our toes, but this was an episode that largely went exactly as expected.

That’s not a criticism. “Inflatable” was a huge amount of fun, and I was very pleased to get an episode with the focus back on Jimmy after a string of episodes where Mike’s (Jonathan Banks) been the star of the show. The opening flashback was very interesting—mainly because it started to to suggest an alternative explanation for Chuck’s story about Jimmy swindling their father out of $14,000, sending him to an early grave, but ended in a way that actually confirmed Chuck’s theory.

It seems that Chuck Snr (Rafael Sbarge) was a naive sucker, frequently targeted by scam artists passing through town, and little Jimmy was the only person who could see his dad’s trusting nature was being exploited. For awhile, it seemed likely the McGill patriarch actually lost $14k through a lifetime of being conned by strangers, not his youngest son being light-fingered, but it seems little Jimmy did take one grifter’s talk of “wolves and sheep” to heart and started stealing from his own family. That was unexpected, because until then the scene was doing a marvellous job presenting a different view on Chuck’s story from last week’s episode, but I guess Better Call Saul wants us to remember Jimmy’s far from a saint. 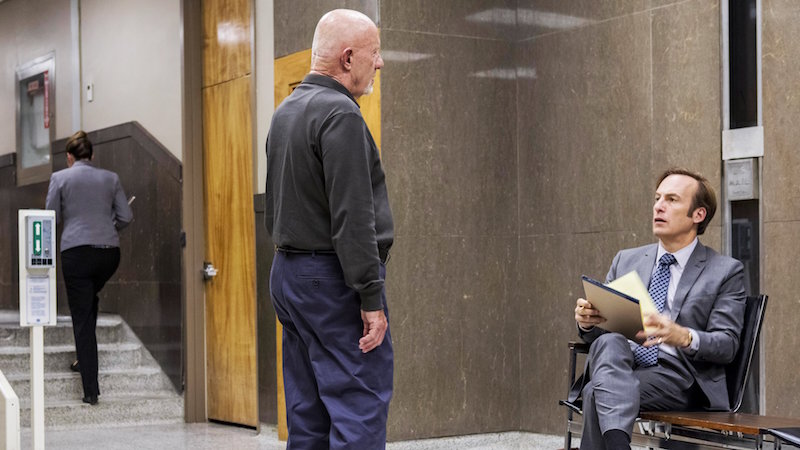 The major storyline this week was about Jimmy and Kim finding new employment. Jimmy decided to get himself fired from D&M, so he can keep a bonus, and went out of his way to become a huge irritant to Cliff (Ed Begley, Jr.): wearing garish suits, refusing to flush toilets after using them, using a messy juicer at work, playing the bagpipes badly in his office, and generally being more like the ‘Saul Goodman’ character from Breaking Bad, in the kind of environment that won’t tolerate kooky behaviour. And it was all presented in a dazzling sequence of colourful split-screens, with the amusing presence of the inflatable Airdancer that gave Jimmy the idea to begin with.

Naturally, it worked. Jimmy was fired from the best job he’s ever had, and then moved back to the Nail Salon back-office, with only his beloved Cocobolo desk to show for it. I have to wonder how the Sandpiper case will go for D&M, now Jimmy’s not around to grease the wheels with all the elderly claimants, but perhaps that whole storyline is being retired now. 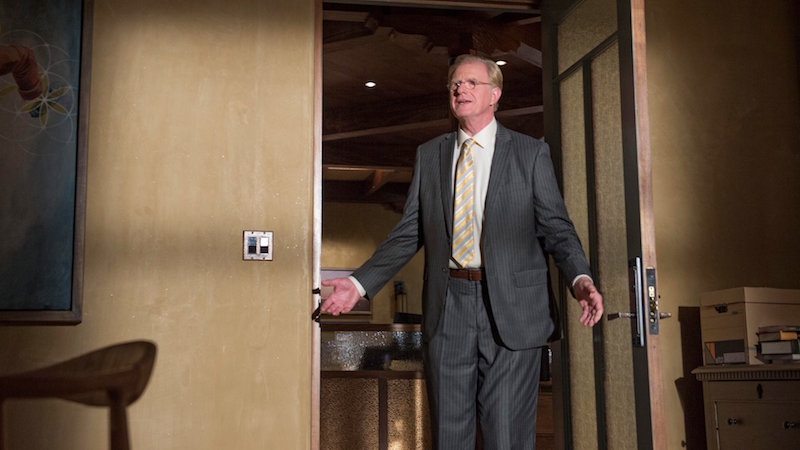 I’d suggested this idea only last week, so was feeling pleased with myself for predicting Jimmy would want to go into business with Kim, suggesting they join forces as Wexler-McGill. As former mailroom employees who have risen through the ranks, almost in parallel, it would be the dream situation for Jimmy to work alongside his girlfriend in business—but, alas, it wasn’t to be. Not quite. While Kim’s tempted by Jimmy’s offer, and eventually realises her move to Schweikart & Cokely would be just as suffocating as Jimmy’s employment with Davis & Main has been, by the end of “Inflatable” she’s offering him a compromise: they each run two separate law firms, under the same roof, sharing some of the financial burden. It seems fair. Both achieve independence and can support each other as friendly rivals, but Kim doesn’t have to get involved with Jimmy’s more “colourful” approach to lawyering.

Mike’s subplot wasn’t very substantial this week, although it nudged things along towards the finale. He’s changed his story to the cops, meaning Tuco’s sentence will be halved, and has used Hector Salamanca’s payoff to get his daughter-in-law Stacey (Kerry Condon) to a new house in a better part of town. The shot of Mike parked outside the Salamanca’s restaurant was very ominous. Is he plotting some of revenge? Isn’t that a bit stupid? Does Mike really think he can get his own back on the Salamanca family?

Overall, “Inflatable” was a deceptively important episode, as it’s clearly moving the story on to a different level with Jimmy and Kim’s careers. Better Call Saul continues to do an impressive job making it all feel very interesting, although a lot of that comes from the performances of Odenkirk and Seehorn. I’m a little disappointed we won’t be getting a season of Wexler-McGill exploits, however, as watching someone like Kim trying to work with someone like Jimmy would have been comedy gold.