Following on from his Oscar-nominated film I Am Love, Italian director Luca Guadagino explores desire in the sun-drenched A Bigger Splash. A remake of Jacques Derays’ La Piscine (1969), the movie stars his long-time collaborator Tilda Swinton as Marianne Lane, an internationally famous rock star with undertones of David Bowie, who, in an effort to escape the limelight (following a throat operation that renders her almost mute), sequesters herself and her boyfriend Paul (Matthias Schoenaerts) on the Mediterranean island of Pantellaria.

Warning: this review contains a few spoilers, so read at your own risk.

Guadagino and cinematographer Yorick Le Saux use the beautiful vistas of the Italian island to great effect, providing a colourful backdrop to this character-driven drama. The opening scenes show Marianne and Paul enjoying the tranquil atmosphere; a quiet introduction of sunbathing, sex and relaxation. However, peace is short-lived when Henry (Ralph Fiennes) and his daughter Pen (Dakota Johnson) arrive in paradise. The director uses the shadow of their airplane passing overhead to visually swallow Marianne and Paul’s idyll in darkness.

Henry is a big rock n’ roll personality and Ralph Fiennes clearly has a lot of fun playing against type. He’s a wild, party-loving record producer who speaks a mile a minute, and his introduction’s a total contrast to the gentle opening. There’s also an interesting blurring between reality and fiction with the characters, as Henry recalls how he made Rolling Stones albums to prove his record producing credentials. Clearly a divisive figure, he begins to draw a wedge between the others, and it’s only later, through one of the narrative-establishing flashbacks, that Henry’s revealed as Marianne’s ex-lover and the man who (now regretfully) introduced her to Paul so he could end the relationship. 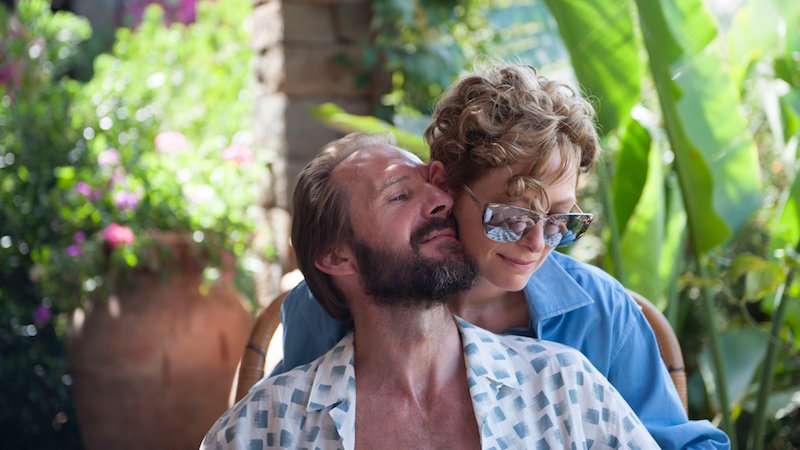 The first 40-minutes of The Bigger Splash probe the connected relationships of the assembled characters. Paul jealously and protectively looks on as Henry clearly still has eyes for Marianne, while his daughter Pen’s attention begins to focus on Paul. Guadagino uses his camera and editing to accentuate the tension and angst between them all, as the pressure boils until desires are fulfilled during a dramatic crescendo.

Fiennes especially excels as Henry; encapsulating the self-obsessed craziness of the character and stealing many scenes. However, the performance walks a fine line and occasionally Henry just comes across as obnoxious. Swinton’s Marianne doesn’t speak much due to her throat operation, and while most actors would see this as a restriction the actress delivers a full performance through looks and gestures.

Unfortunately, the remainder of the film starts to unravel after a very good start. The laboured pace, which works so well in the tense moments, begins to become a drag. This, in turn, makes some key scenes undramatic because they’re preceded by slow and arguably inconsequential moments. There’s also a tonal shift from intimate character-driven drama to political drama, with a sudden emphasis on the island’s refugee crisis that comes out of nowhere. While it does highlight and contrast the self-obsessed main characters, it felt like an afterthought.

Ultimately, A Bigger Splash winds up being a half success. What it gets right is the excellent performances, the stunning cinematography, and a soundtrack that expands to include some of the Stones’ oeuvre. The first half gets under the skin of everyone’s personalities and it’s certainly engaging to watch, but after the script refocuses the story peters out as it turns political.